“There is no federal solution”: Biden says governors must take the lead in COVID response

“This gets solved at a state level," Biden says, even as many GOP governors fight public health recommendations 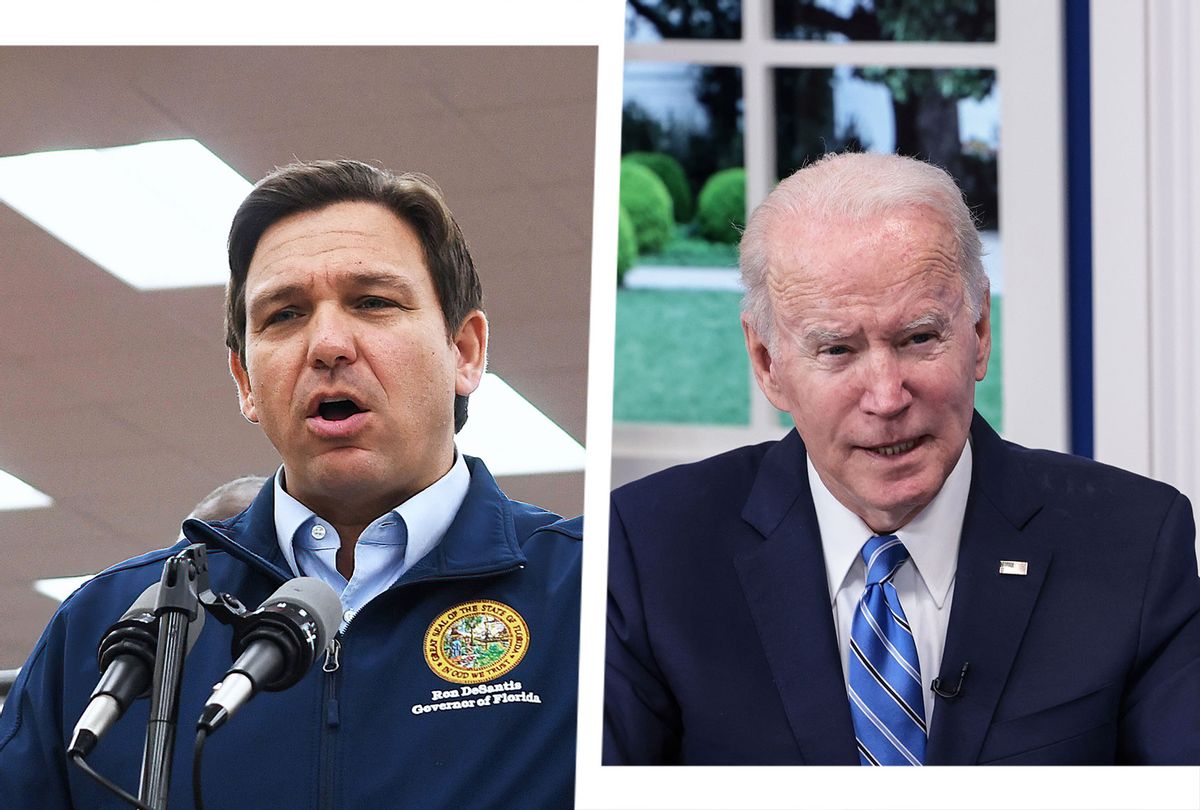 President Joe Biden on Monday vowed to provide more federal support to states, but called on governors to take the lead in the nation's pandemic response.

Before a video meeting with state governors, the president reiterated his administration's plan to send out 500 million rapid COVID tests and expand testing capacity and federal aid as the omicron variant continues to spread, but said that governors will have to take charge even as many Republican governors continue to fight federal response efforts.

"There is no federal solution," Biden said. "This gets solved at a state level."

While acknowledging the limits of the federal response, Biden said his administration would support state efforts.

"My message to the governors is simple: If you need something, say something," he said. "We're going to have your back any way we can."

The administration plans to launch a website next month where Americans can request free at-home tests. It will also deploy 1,000 military medical professionals to help shore up hospitals struggling with worker shortages. Last week, the Centers for Disease Control and Prevention shortened its isolation time for health workers who test positive to seven days if they are asymptomatic and test negative, in an effort to allow health workers to return to work more quickly.

RELATED: Live in a pro-Trump county? You're nearly three times more likely to die of COVID-19

Biden throughout his first year has focused his efforts on vaccination. Omicron, however, can penetrate both vaccination and the natural immunity caused by prior infection, although people who have received two to three doses of the Pfizer or Moderna vaccine are less likely to become severely ill. Though omicron infections tend to be less severe than those from the delta variant and others, public health experts are alarmed that even a small percentage of those infected with the fast-spreading variant could quickly overwhelm hospitals. States like New York and New Jersey, which were among the first to get hit with the omicron wave, are seeing more new infections per day than at any other point during the pandemic.

Relying on states to lead the nation's response could prove difficult in certain parts of the country. Many Republican governors have fought Biden's federal vaccine mandates and other public health recommendations. Texas Gov. Greg Abbott earlier this year banned public entities and private businesses from requiring employees or customers to be vaccinated, even as data shows that unvaccinated people are far more likely to suffer severe illness or even death from omicron and other variants. Florida Gov. Ron DeSantis has also issued executive orders barring certain vaccine and mask requirements.

Although DeSantis touted the low infection levels in Florida this fall, after a massive summer spike had receded, the state's seven-day average of daily new cases has increased by 326%. Nationwide, the seven-day average hit 176,000 last week, a 44% increase in just two weeks.

"Every day it goes up and up. The last weekly average was about 150,000 and it likely will go much higher," Dr. Anthony Fauci, Biden's top COVID adviser, told ABC News on Sunday.

Though the new variant tends to result in fewer hospitalizations, the surging numbers could pose big problems for hospitals. Fauci said he is particularly worried about the unvaccinated, who are more likely to live in Republican areas.

"If you have many, many, many more people with a less level of severity, that might kind of neutralize the positive effect of having less severity when you have so many more people," Fauci said. "And we're particularly worried about those who are in that unvaccinated class. Those are the most vulnerable ones when you have a virus that is extraordinarily effective in getting to people and infecting them the way omicron is."

Some Republican governors have instead taken steps to protect the unvaccinated. Five Republican-led states –– Florida, Arkansas, Iowa, Kansas and Tennessee – have extended unemployment benefits for people who lose their jobs because they are unvaccinated, despite cutting off enhanced unemployment benefits early for those laid off during the pandemic.

Health experts say these policies will only make it more difficult to control the pandemic.

"The longer we have high levels of circulation in our communities, the more variants that are worrisome we'll see," Crystal Watson, a professor of public health risk assessment at Johns Hopkins University, told CNN. "From a scientific perspective, from a public health perspective, creating support for people who won't get vaccinated, that's really damaging."

"These are the same Republicans who say they want small government and let people decide for themselves," state Rep. Anna Eskamani, an Orlando Democrat, told CNN. "But not only are you incentivizing policies that are anti-public health, but you're rewarding them for it. You should be incentivizing people to make good decisions."

Read more on the politics of COVID: