Being Desi Arnaz: The "flawed genius" that "Being the Ricardos" doesn’t show – or see

Both Javier Bardem and Arnaz have been overshadowed by their redheaded costars, but don't deserve to be 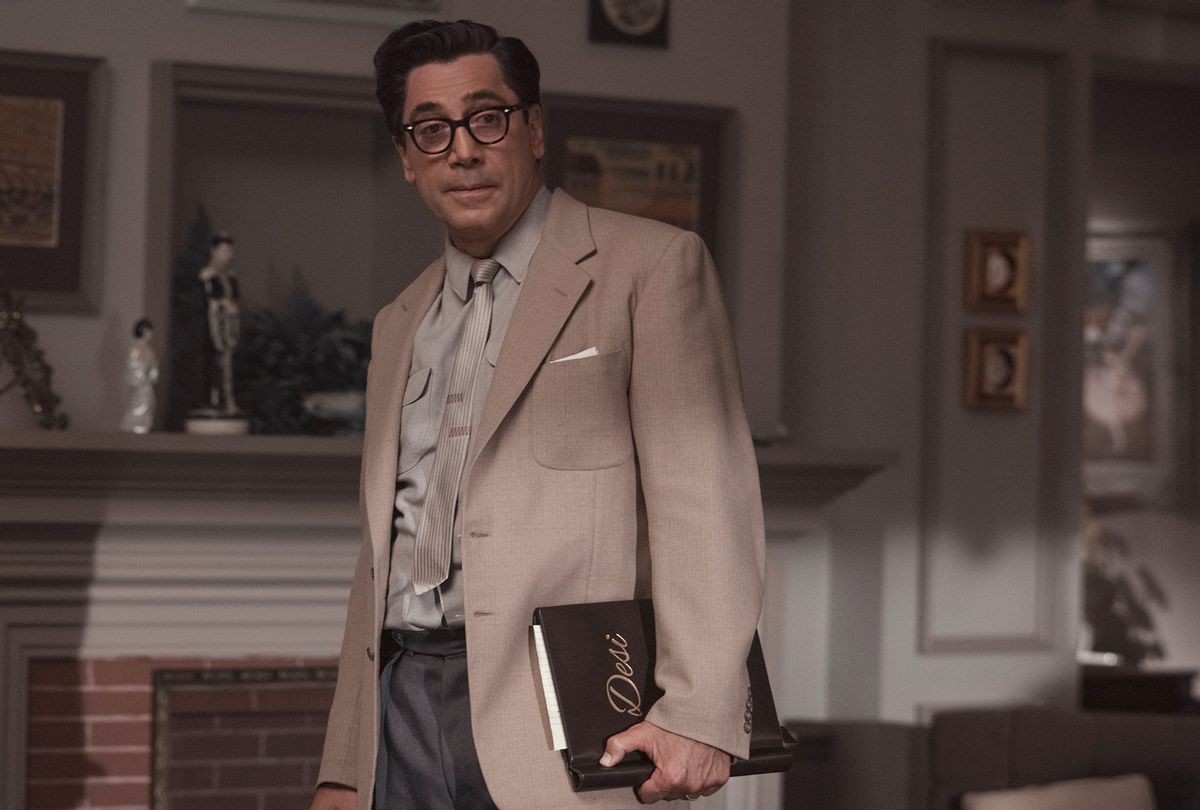 That bickering you hear? It's fans of old Hollywood vivisecting Aaron Sorkin's "Being the Ricardos," the loudest voices devoted to the question of the sufficiency of Nicole Kidman's transformation into comedy legend Lucille Ball. "Nicole Kidman Embodies Lucille Ball in First Full-Length 'Being the Ricardos' Trailer" was The Hollywood Reporter's Nov. 10 headline, but now that I've seen the film, I would argue that more wondrous is Javier Bardem's metamorphosis — his speech, his swagger, his capacity to command a room — into Ball's husband and "I Love Lucy" costar, Desi Arnaz.

Given that "Being the Ricardos" is a portrait of a troubled Hollywood marriage, why does it seem to be framed as Ball's-slash-Kidman's movie? I throw no shade in Kidman's direction in saying this, but as I watched, I became convinced that the singing, scene-stealing Bardem, playing a character who behaves in ways that risk eroding audience sympathy, is doing the heavy lifting. How fitting, I can't help but think, given that the real Arnaz was arguably doing the heavy lifting on "I Love Lucy."

Nothing will unseat Ball as a master of physical comedy, but "I Love Lucy" offers a different viewing experience when seen through a Desi-centric lens, which is the way I watched the sitcom some years ago when I was writing about "A Book," Arnaz's bawdy and almost ceaselessly entertaining 1976 autobiography. I stand by what I wrote at the time: "What he was doing on-screen was deceptively complicated: holding his own against Lucille Ball, building a sympathetic killjoy character, making you believe he would never divorce his lunatic wife, and keeping a straight face, sometimes while unleashing a logorrheal burst of Spanish." I forgot to mention that he also had to sing.

And yet I haven't found much of anything written on Arnaz's performance as Ricky Ricardo. It must have smarted that he was the only one of the "I Love Lucy" four principals not nominated for an acting Emmy for the show. One would hope that applause for his behind-the-scenes accomplishments somewhat offset the sting: not only was Arnaz a crack executive at Desilu, the television production company he started with Ball, but he invented the three-camera technique for filming TV shows. By all accounts, this was a necessity-born innovation: it meant that he and Ball didn't have to go to New York to make "I Love Lucy"; they could film the show in California, where they were starting a family and trying to patch their already fraying marriage.

Lucie Arnaz, the actress-singer daughter of Lucy and Desi, doesn't think her dad has gotten his due. (This I gleaned while the never-ending reel of YouTube interviews with old-Hollywood legends and their progeny coddled me through the worst days of the pandemic.) I'd have to agree. It's an inconvenient truth for raving feminists like me that, while the unsung-woman-behind-her-more-famous-man story is more typical (see "Fosse/Verdon," "How I Became Hettie Jones," et cetera), there do exist gender-switcheroo examples of the at-least-as-talented guy overshadowed by his gal.

"Being the Ricardos" does reserve screen time for Desi's unhappiness with being Lucy's perceived sidekick. In one scene, efforts are made to placate bruised second banana Desi with an executive producer credit for "I Love Lucy." There are also real-life tales of his demoralization. According to the TCM podcast "The Plot Thickens," which commits its third season to Ball (and is not, it's reasonable to conclude, taking the narrative liberties that Sorkin does in his movie), Desi blew a gasket in 1959 while on vacation with Lucy after he received a package addressed to "Mr. Ball." The incident, according to one of Lucy's relatives, exacerbated his already dedicated drinking.

In "The Plot Thickens," Lucie Arnaz indicates that, when it came to underappreciating Desi, his parents were at the head of the line. He was born in 1917 in Santiago de Cuba, a city of which his father was at one point the mayor. During the Batista revolution of the 1930s, the well-heeled Arnaz family lost everything, and teenage Desi and his father fled to Miami to start life over again. Desi's rise — musician turned bandleader turned actor turned cofounder of a production company with a hit TV show costarring him — was objectively impressive, but for the senior Arnazes it wasn't enough. In "The Plot Thickens," Lucie Arnaz says that her dad "had PTSD from the revolution, and from parents who never really said, 'You know what? You're phenomenal. What you've done is spectacular.' They went, 'Is that it? Is that all we got? Is there anything in there for me?'"

In a 1977 TV interview with Barbara Walters conducted during what I've come to think of as Ball's Phyllis Diller period, she acknowledges that within the industry, Arnaz wasn't recognized for his contributions, and that his background played a part: "Even while they were building, they would not believe that he was doing the building. And he was doing the successful building of a very well-run empire. I was doing the acting and having the children. I had no part of it — I took that on much later. But I knew what he had suffered — really. And how he did not deserve that. And just because he was Cuban and once a bongo player did not warrant calling him any of those names."

After I saw "Being the Ricardos," I wondered if, had Desi been alive to see it, he would have accepted the film as a form of restitution. I emailed my question to Lucie Arnaz, one of the people who presumably knew Desi best. (She was with her dad when he died of lung cancer in 1986, having finally gone into alcohol rehab not long before his diagnosis.) Lucie, who executive-produced "Being the Ricardos" and posted a video of herself in which she calls the film "frickin' amazing," told me this: "Both of them, I am certain, [would have been] very happy with the way they are portrayed in the picture. My father was portrayed with a great deal of professional respect and an enormous amount of love. Much the way I think Aaron Sorkin is hoping people will remember him: a flawed genius."

Desi's fatal flaw was his weakness for the ladies, and his affairs were at the heart of his and Lucy's 1960 split, after two decades of marriage. "Being the Ricardos" doesn't look at whether Desi's chronic cheating had a psychological basis (an urge to hurt Lucy? Self-sabotage?) or whether his philandering might have reflected an unshakable cultural norm. (From "A Book": "Having two houses and two sets of children was very common among Latin men of means, and Latin women understood this and didn't make a fuss about it.") To be fair, sticky psychosocial territory wasn't within the scope of a snappy biopic like "Being the Ricardos." And yet the film's lopsidedness niggles at me. While it includes moments from Lucy's perspective — there's that key scene when she's doing the laundry, for one — I don't recall any scenes from Desi's point of view. Had a scene of Desi alone been included, what might it have shown? What was Desi like, not just when the cameras weren't rolling but when no one was watching him at all?