Jokes aside, Nicole Kidman is commendable in Aaron Sorkin's mostly watchable "Being the Ricardos"

From fame and pregnancy to Communist aspersions, this overstuffed film suffers more from its director than it cast 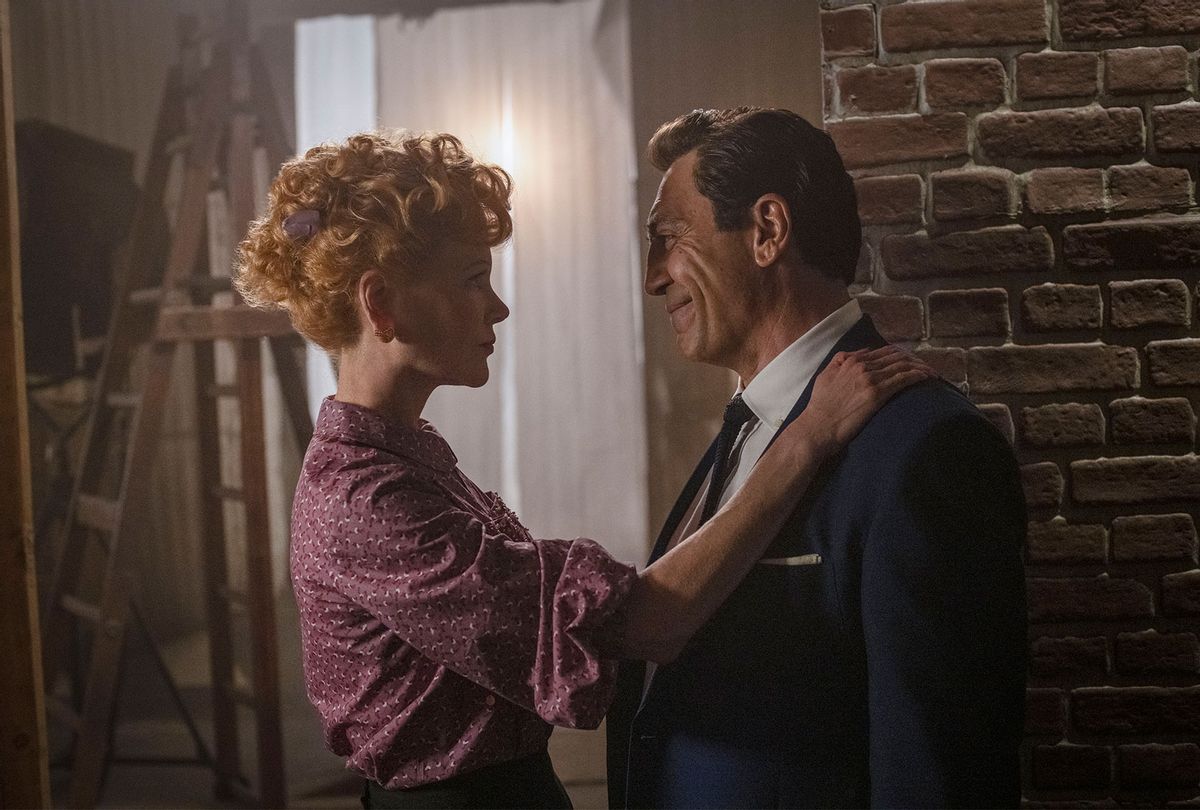 Nicole Kidman and Javier Bardem in "Being the Ricardos" (Amazon Studios)
--

It is tempting to hate-watch "Being the Ricardos," writer/director Aaron Sorkin's mercurial drama — based on true events — about a difficult week in the lives of Lucille Ball (Nicole Kidman) and Desi Arnaz (Javier Bardem). Although the film has a myriad of problems, it is, to damn with faint praise, mostly watchable.

Sorkin's trademark, hyperverbal dialogue is, of course, front and center, and there are copious scenes of characters walking and talking. But the bickering between the writers Madelyn Pugh (Alia Shawkat) and Bob Carroll (Jake Lacy) about who got the better joke first is tiresome, and the "clever" putdowns between William Frawley (J.K. Simmons) and Vivian Vance (Nina Arianda) can feel as canned as a laugh track at times. Sorkin's dialogue works best when Lucy is being especially precise in parsing out the words and meaning when other characters are talking at her. She forces them to reexamine whether she should absorb their remarks as an insult or just read it as proof of their stupidity. A terrific example of this is when she gets the last word after meeting with an RKO executive who cancels her contract with the studio.

Lucy is a tough cookie here, and Kidman's casting, which has been debated since it was announced, works because Lucy is more nervy and vulnerable than funny. Kidman makes viewers feel her rollercoaster of emotions. That said, the actress never truly disappears into the role, but it is a commendable performance.

RELATED: With "The Trial of the Chicago 7" we get a history of disobedience that is very relevant today

As Desi, Bardem's turn is also strong, even if he sounds like the last famous Cuban the actor portrayed — poet and novelist Reinaldo Arenas. Bardem makes Desi charming during a cringy comic bit about making the "h" after the "g" silent when pronouncing "Westinghouse," and charismatic performing a handful of musical numbers. But he also shows real mettle in the scenes dealing with the suits at the studio — although he is on less solid ground when Desi fights with Lucy.

"Being the Ricardos" opens when Walter Winchell floats a veiled suggestion in his Sunday radio broadcast that Lucille Ball is a communist. Lucy does admit to "checking the box" 20 years ago, but she has never been to a meeting or involved with the Communist Party. If the media catches hold of the story, it will end the couple's professional careers.

Another bomb goes off when "Confidential" magazine publishes a story that Desi has been cheating on his wife. However, the photo is old, the couple acknowledge, and the story is likely untrue. Desi denies it, and Lucy wants to believe him.

A third situation that arises is that Lucy is pregnant, and this development will need to be written into the show. Alas, showrunner Jess Oppenheimer (Tony Hale) insists that the executives will not allow it.

Sorkin has plenty of material here to examine the relationship between the celebrity couple at the time of their greatest fame and how they work through these problems independently and together. But why spin only three plates, when one can spin six? Sorkin lards "Being the Ricardos" with unnecessary scenes, such as a series of decades-later interviews with Jess (John Rubinstein), Madelyn (Linda Lavin), and Bob (Ronny Cox) to provide layers of context. These didactic interruptions feel superfluous and, feature annoyingly glib show business patter.

Sorkin also frames his narrative around the rehearsal, blocking and filming of an episode of "I Love Lucy" titled "Fred and Ethel Fight." (We get the metaphor, Aaron!) This provides an opportunity for Lucy to illustrate how she controls things on her show, down to choreographing the physical comedy of a dinner table sequence at two in the morning. Lucy also has concerns about making an opening gag believable, about Vivian Vance's weight, and working with a hack of a director, Don Glass (Christopher Denham). Moreover, she also hopes to save her marriage by asking Jess to make Desi an executive producer on the show. Now Sorkin is up to 12 plates. It is hard not to feel exhausted, or to wince as some come crashing down.

All of this drama ebbs and flows but it never gels. The communist storyline hangs in the background like a sword of Damocles, eventually building to a do-or-die moment right before the week's episode is taped, but it does not generate much narrative tension. It is better used to show Lucy's moxie; she is unapologetic about "checking the box," and angry that Desi is telling folks she "checked the wrong box," as if to belittle her thoughts and actions.

That emotion bleeds into her concerns about her marriage and how little time Lucy and Desi actually spend together. Even if "Being the Ricardos" mostly takes Lucy's point of view, it at least serves a purpose. A scene of Desi, leaving a club after a show has him ignoring his young female fans to go meet his wife. When Lucy attends a performance, everyone at the club swarms her, instead. The imbalance of their relationship is felt throughout, even in a flashback sequence when she is excited by getting cast in "The Big Street," just as Desi is about to go on tour.

Sorkin also overcompensates by showcasing Lucy's brazenness at every opportunity, from repeatedly insulting her director to dictating the terms for turning her radio show "My Favorite Husband" into the TV sitcom, "I Love Lucy" in a roomful of executives. Much stronger are moments of Lucy imagining the comic potential of Lucy stomping grapes, or when she and William Frawley have a heart-to-heart in a bar.

"Being the Ricardos" never quite gets at what makes Lucy tick even if Kidman does get into her determined mindset. But watching a despondent Lucy walking through the rain following an unpleasant discovery is gilding the lily.

Sorkin's film may feel sloppy in more ways than one. "I Love Lucy" purists may scoff that the film's "Fred and Ethel Fight" was, in fact, Episode 22 of Season 1, and not Episode 37 as "Being the Ricardos" indicates. The filmmaker may be taking poetic license to fold in a reference to Lucy's famous "Vitametavegamin" line, (Season 1, Episode 30). But it could just be part of Sorkin's plate-spinning. He takes on too much here. Some of it pays off.  Simmons and Shawkat deliver reliable support, and the film's look from the sets to the costumes is fabulous. But most of "Being the Ricardos" lacks the magic it is trying to capture.

"Being the Ricardos" is currently in theaters and streams on Prime Video starting Tuesday, Dec. 21. Watch a trailer for it below, via YouTube.