It's a new year — but time is broken in America. Can we recover from this?

When we can't process time or remember anything, stopping fascism will be especially tough. Set your clocks 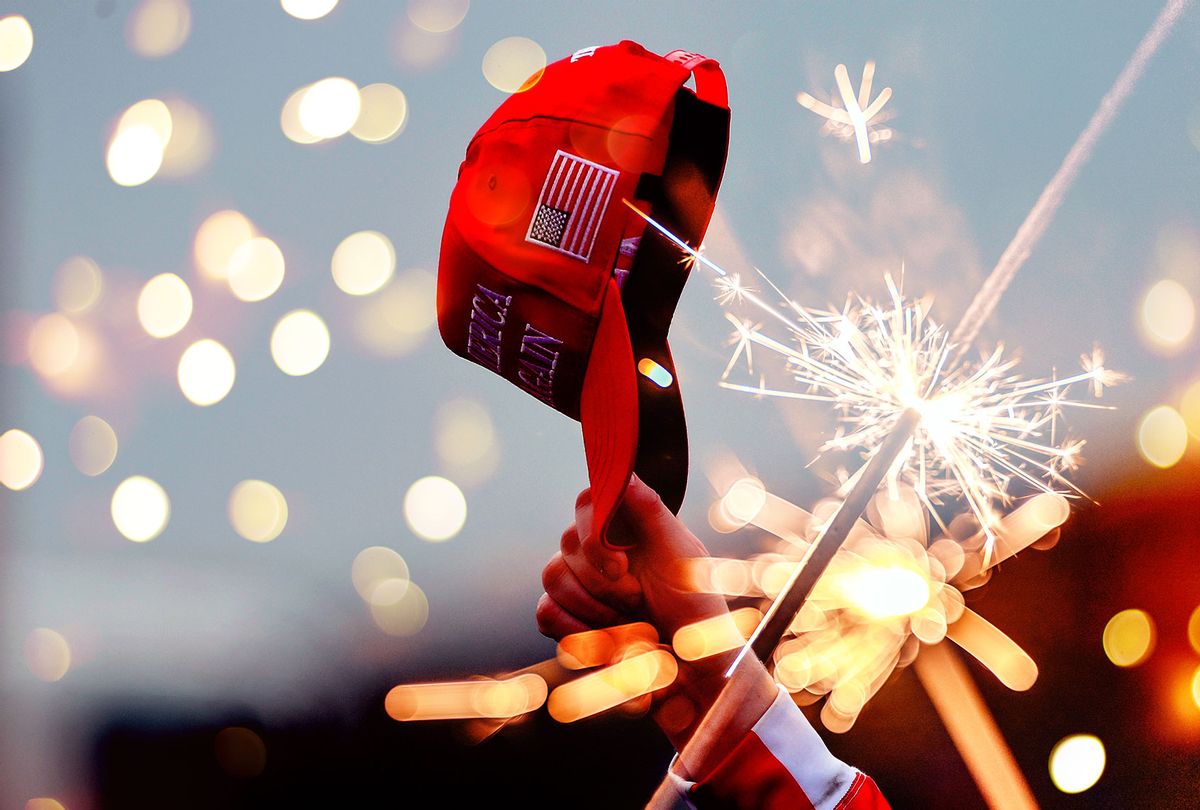 Happy New Year. I hope you let loose your "Auld Lang Syne" and other songs for relief and distraction — and perhaps even lamentation.

As 2022 begins, we face ascendant fascism, global climate disaster, an unrelenting plague, extreme inequality and many other existential troubles.

Fascism remains the mind killer, the destroyer of facts and reality, seeking to remake them in its own image. In our current state of malignant reality, Joe Biden may be president, but Donald Trump's maleficent influence endures. We need wisdom to guide us through this confounding and painful state of being. Here is literary critic Michiko Kakutani, in a 2018 essay for the Guardian:

There are no easy remedies, but it's essential that citizens defy the cynicism and resignation that autocrats and power-hungry politicians depend on to subvert resistance. Without commonly agreed-on facts — not Republican facts and Democratic facts; not the alternative facts of today's silo-world — there can be no rational debate over policies, no substantive means of evaluating candidates for political office, and no way to hold elected officials accountable to the people. Without truth, democracy is hobbled.

Hannah Arendt, in her essential work "The Origins of Totalitarianism," wrote that before autocrats "seize the power to fit reality to their lies, their propaganda is marked by its extreme contempt for facts as such, for in their opinion fact depends entirely on the power of man who can fabricate it." At a different point in the same work, Arendt issues this warning:

In an ever-changing, incomprehensible world the masses had reached the point where they would, at the same time, believe everything and nothing, think that everything was possible and that nothing was true. ... [U]nder such conditions, one could make people believe the most fantastic statements one day, and trust that if the next day they were given irrefutable proof of their falsehood, they would take refuge in cynicism; instead of deserting the leaders who had lied to them, they would protest that they had known all along that the statement was a lie and would admire the leaders for their superior tactical cleverness.

She was writing in response to the regimes of Hitler and Stalin, but that wisdom still pertains, nearly 80 years later.

Fascism is an assault on reality, and in a sense an attempt to break time. Time is more than measurement in seconds, minutes, hours, days, months and years. It is also temporality: the meaning we assign to time and our perception of it.

So much is happening now, yet there is a sense that nothing is changing; the doom loop is perpetual. With these ongoing crises — be they political, economic, environment, social, personal or existential — there is a collective sense that anything can happen at any moment.

For many people, a feeling of predictability has been lost. They feel unmoored in space and time. In many ways, the American people are collectively experiencing a waking dream. For some, indeed for many, it is a nightmare.

There is also the sense that America faces what the Italian Marxist Antonio Gramsci described as an "interregnum," an in-between moment where "the old world is dying and the new world struggles to be born. Now is the time of monsters."

"Such moments of crisis pose a fundamental challenge to the way individuals think about their role in society," as I wrote in an earlier Salon essay:

When a society's landmarks are erased and its lodestars or guiding lights are plucked from the sky, a collective confusion and disorientation — even madness — can take hold. Fundamental questions of personal identity come to the fore: Who am I in this moment? How do I make sense of it all? Will I even survive? Am I obsolete? Does my life have meaning?

To varying degrees and in different ways these kinds of questions are being asked by both America's elites and everyday people. There are no easy answers but the stakes are very high: America's choice between fascism and freedom.

Ultimately, something is deeply wrong in America. We have known that for a long time. Many of feel powerless because of that omnipresent. Such is the way of hegemonic power in a society under siege by neofascism and other anti-human and anti-social forces.

In a post at Tor.com (a science-fiction site), Emmet Asher-Perrin channeled this energy in a critical essay on the new film "Matrix Resurrections":

"Resurrections" finally tells us the story of what comes after the aftermath, and it does so with a frighteningly accurate measure of our weaknesses, both practically and existentially. How many people would actually take that red pill, if given the opportunity? How easy are we to manipulate, to coerce, to con into complacency even in the presence of facts? And why, despite all of that, do so many of us know that something is terribly wrong with the current state of things? …

It's ironic also that Neo is told, in no uncertain terms, that he will have to fight for a right to his life this time around. And that he truthfully does have to fight — but not in the way that anyone is expecting. It's a state of affairs that roughly mirrors where most of us are at in this point in time, if we're the sort of people who acknowledge that we exist under circumstances that are unsustainable.

To sustain such a state of angst and learned helplessness, fascists like Donald Trump and his followers are using the political weapon known as "sadopopulism" to traumatize the public. Sadopopulism is part of a feedback loop where fascists and their agents create the pain for which they then promise to provide the cure. The cycle continues until the fascist movement is destroyed or it destroys the society that harbors it — or quite likely both.

Psychologists and other researchers have detailed how such societal feelings of pain and trauma distort the way individuals and groups perceive time and reality. Writing at Psychology Today, clinical psychologist Cynthia Baum-Baicker explained, in an article published last fall:

Our sense of time is off. It may seem dissolved even though the structure of minutes-hours-days has remained the same. Suspended as it moves, why does the present seem isolated from the continuity of time? The reasons go beyond the changes to our daily routines and structures that COVID-19 has wrought.

The invisible threat of COVID-19 and the upcoming presidential election are a one-two punch to our felt sense of security. We no longer have our illusory assumptions that the future is knowable and predictable. Who will get sick? What will happen to our democracy? Will there be a peaceful transition of power? Researchers have found that without illusions of a knowable future, we tend to live more in the present moment. And our present moment — the very thing that is filling the gap of the unknown future — is riddled with stress.

Altered time perception has been termed "temporal disintegration" or "temporal discontinuity," and has been shown to be related to mood state. ... Unlike hearing, seeing, or tasting, the sense of time is not mediated by a specific sense organ but rather is "embodied" in a more all-encompassing way. It has been shown to be encoded in body signals governed by the insula, a fragment of the cerebral cortex folded deep within each lobe of the brain. Time sense fully embraces us because it lives throughout our brain.

Unconscious psychological defenses, too, can contribute to our altered sense of time. In a state of overwhelm, the psychological defense of dissociation often unconsciously kicks in. Dissociation is a feeling of being here and not being here simultaneously. This unreal feeling of time is analogous to an electrical system that gets overheated when overloaded. In a functioning system, the overheating trips the circuit breaker before it gets too hot. Dissociation helps us in times of powerful stress — overload — to remain as functional as possible.

Given that we are living a collective trauma, is it any wonder so many of us are experiencing temporal discontinuity?

On New Year's Eve, as I always do, I reflected on the year that is gone. I also offered up some hopes for the year to come. I went outside at midnight and howled and screamed at the moon, as I have done for many years. That was as much to say goodbye to the year now gone as to have some cathartic moment of relief for all our personal and collective frustration at the state of America and the world. Matters do not have to be as bad as they are. If a society lives this way, that's because it has made a choice.

I told my friends and family that I love and appreciate them. As the saying goes, I believe in giving flowers to people while they are alive.

Like millions of other Americans, I watched the New Year's Eve "Twilight Zone" marathon. During these last few years, I have asked myself, so many times, what would Rod Serling have done with this moment, given his genius, moral clarity and truth-telling about injustice, evil and the mysteries of the human condition?

I ended my New Year's Eve by watching one of my favorite episodes of "Babylon 5," J. Michael Straczynski's classic science fiction series. At the end of the episode "Z'ha'dum." Andreas Katsulas, who portrayed the character Gkar, offers the following monologue:

All around us ... it was as if the universe were holding its breath. Waiting.

All of life can be broken down into moments of transition or moments ... of revelation. This had the feeling of both … There is a greater darkness than the one we fight. It is the darkness of the soul that has lost its way.

The war we fight is not against powers and principalities. It is against chaos ... and despair.

The future is all around us. Waiting in moments of transition to be born in moments of revelation. No one knows the shape of that future or where it will take us. We know only that it is always born in pain.

The American people face a reckoning. They will have to make a decision about whether they will surrender to neofascism or purge it and the swamp from which it grew. There is a great challenge and paradox to be overcome in such a decision: We are running out of time — while having lost the full meaning of time during these last few years.

This year may be one of the most important in America's history, ranking with the Civil War, World War II and the turbulent years of the 1960s, which saw America's third founding" in the triumphs of the civil rights movement and Black Freedom Struggle. Are the American people ready to endure the pain that will be required to find themselves again, after becoming so lost in time during these last years? Or have too many of them now accepted this lost and broken state as the new normal?

The year 2022 will bring us answers, for better or worse.