As the threat of authoritarian takeover grows, most Americans have lost interest. They'll have nobody else to blame 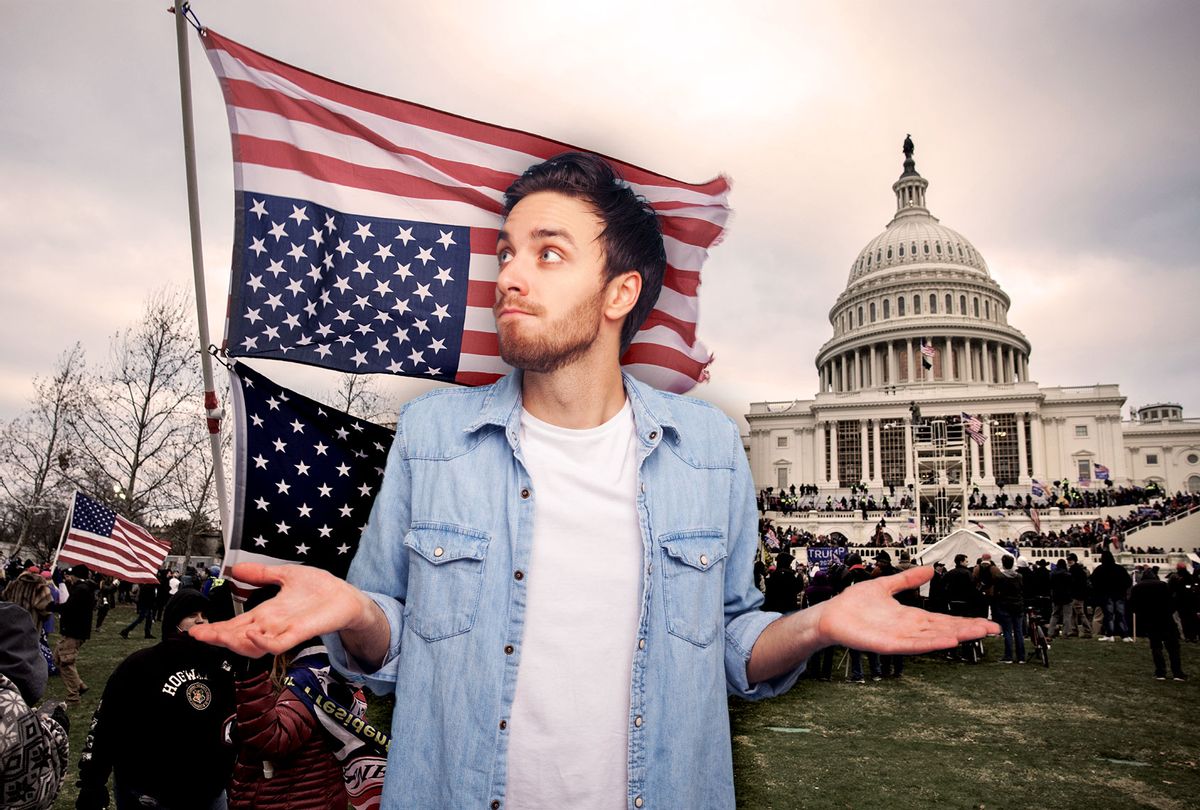 In America (and around the world) the year 2021 was one of great sadness and frustration. By many indications, 2022 may be even worse.

America's democracy crisis continues to escalate. The alarm is blaring but the American people, for the most part, continue to ignore it. Last Jan. 6, Donald Trump and his regime attempted a coup with the goal of nullifying the results of the 2020 presidential election and, in effect, ending American democracy. In many respects, Trump's coup attempt was atypical, if not wholly unique.

It was publicly announced by Donald Trump and his agents months or even years in advance. Despite those warnings, law enforcement officials and national security leaders did little to prepare for it. Most of the mainstream news media and pundit class did not take the threat seriously, instead choosing to mock those truth-tellers who kept sounding the alarm.

Nearly a year after the attack, Donald Trump and the other high-level planners and conspirators have not been punished, and remain free to continue plotting the overthrow of American democracy. As has been widely observed, the Trump regime's coup attempt may be the least-punished such high crime in recent history.

Even Trump's foot soldiers have not been punished to the full extent of the law for their participation in the Capitol attack. While some have faced prosecution, the Justice Department has acted with great restraint.

Some "good news": Donald Trump's coup attempt was an example of what experts on authoritarianism and democracy describe as an attempt at an "autocratic breakthrough." Most democracies quickly fall before such assaults. This one was repelled, which is something of a unique accomplishment.

RELATED: Fascism in America: It's nowhere near as new as you might think

In other ways, the Trump regime's coup attempt was not so unusual. As in other places and times in history, Trump's loyalists are continuing with their efforts, both through more or less legal means and otherwise. When a coup fails the first time, the second attempt is usually successful. All of this is happening in real time and in plain sight, with minimal attempt at deception. For the American people and their responsible leaders to ignore such threats is a willful choice.

What warnings should we be heeding now? In a recent op-ed for the Washington Post, retired U.S. Army generals Paul D. Eaton, Antonio M. Taguba and Steven M. Anderson are sounding the alarm about the possibility of a second civil war in the aftermath of a future presidential election, if Donald Trump or another Republican refuses to accept the results:

We — all of us former senior military officials — are increasingly concerned about the aftermath of the 2024 presidential election and the potential for lethal chaos inside our military, which would put all Americans at severe risk….

Imagine competing commanders in chief — a newly reelected Biden giving orders, versus Trump (or another Trumpian figure) issuing orders as the head of a shadow government. Worse, imagine politicians at the state and federal levels illegally installing a losing candidate as president.

All service members take an oath to protect the U.S. Constitution. But in a contested election, with loyalties split, some might follow orders from the rightful commander in chief, while others might follow the Trumpian loser. Arms might not be secured depending on who was overseeing them. Under such a scenario, it is not outlandish to say a military breakdown could lead to civil war.

In this context, with our military hobbled and divided, U.S. security would be crippled. Any one of our enemies could take advantage by launching an all-out assault on our assets or our allies.

This is but the most recent in a series of public warnings by America's senior national security leadership, both before and after Jan. 6, about the spiraling danger of a new civil war, a right-wing insurgency and other forms of terrorism and political violence. Such warnings are without precedent in modern American history and highlight the extreme peril the country now faces from the Republican fascist movement.

It has also been reported that military leaders were seriously concerned that Trump might order the National Guard to intervene on his behalf on or around Jan. 6 by invoking the Insurrection Act. If he had given such an order, the country would have come dangerously closer to an authoritarian takeover and perhaps widespread violence, with elements of the military battling one another. Experts on civil war have warned that the U.S. is well along such a path.

Domestic terrorism experts have also warned that right-wing extremists and paramilitary groups are organizing on the local and state level to intimidate, harass and target "liberals," Black and brown people, Muslims, Jews, immigrant communities and others deemed to be their enemies. This is part of a nationwide campaign by Republican fascists and the larger white right to attack American democracy on the local and state level in order to facilitate Trump's return to power (or the "election" of his designated successor).

It is reasonable to feel angry about the American people's apparent passivity in the face of these obvious threats against democracy. But the more important question is why they are responding that way, and what that tells us about the health of American democracy and political culture? In essence, why do so many people simply not care?

There are many explanations. Most Americans do not follow politics closely. They also do not understand it very well. As we approach the one-year anniversary of Jan. 6, opinion polls show that fewer people are paying attention to the investigation into those events.

This is not, in itself, surprising. A large percentage of Americans, if not a majority, do not closely follow the news. At least half the population cannot read at a sixth-grade level. The average American's understanding of politics also ebbs and flows, most obviously in response to shared crises or calamities, but also in response to those events that the news media and leading political figures focus on most intensely. In this case, if the Democrats and others who support democracy do not consistently highlight the existential threat posed by the Republican-fascist movement, then most Americans will not pay attention.

American voters are also strikingly poor at attributing responsibility to the correct political leaders or parties for their policy failures. Most people receive information about current events from a trusted network that may include friends, relatives, community leaders, clergy members, favored politicians and media voices and, increasingly, social media such as Facebook or Instagram. Such a network is likely to be insular and inaccurate, serving as a type of echo chamber — especially for Republicans and "conservatives."

In an era of extreme right-wing asymmetrical polarization and negative partisanship, disinformation and a coordinated assault on truth and reality, as well as an overall culture of spectacle, unrestrained consumerism, cruelty and endless distraction, many Americans lack the capacity to make informed and responsible political and social decisions.

A large percentage of Americans believe (quite correctly) that the country's political elites and other leaders have failed in their responsibilities to society and are increasingly detached from the experiences of everyday Americans. This reflects a 60-year trend of declining faith and trust in the country's leaders and the legitimacy of "the system."

There is also a worrisome decline in the American people's faith in democracy itself, especially among younger people. A recent poll by Grinnell College offers additional context about the deep political and cultural divides that are driving the country's democracy crisis:

Americans were somewhat more likely to have high trust in state governors (25%) and city or county elected leaders (19%) to offer good ideas to solve problems in their communities. In both cases, only a minority of Americans had high trust in elected officials.

"Trust in political institutions is the glue that holds democracies together and allows them to weather crises over time," said Grinnell political scientist Danielle Lussier. "While there will always be some skepticism toward the government, when a majority of people express distrust in elected officials, the legitimacy of the constitutional order is called into question."

"Americans lack a collective sense of whom to trust," Lussier said, which "helps to explain why it is so hard to build a consensus for solving the country's problems."

Perhaps most important of all, for at least the last 50 years right-wing libertarians and other extremists have advanced a strategy to undermine faith in American democracy and the idea of government itself. This has created a space for right-wing political entrepreneurs to expand their power and influence by convincing large portions of the white American public that democratic government is illegitimate if it does not secure continued white supremacy.

In total, Americans are collectively experiencing a moment of social and political alienation, in which many of their fellow citizens are willingly surrendering to the forces of demobilization and authoritarianism.

Philosopher and political theorist Sheldon Wolin described such a moment in his book "Democracy Incorporated: Managed Democracy and the Specter of Inverted Totalitarianism":

Antidemocracy does not take the form of overt attacks upon the idea of government by the people. Instead, politically it means encouraging what I have earlier dubbed "civic demobilization," conditioning an electorate to being aroused for a brief spell, controlling its attention span, and then encouraging distraction or apathy. The intense pace of work and the extended working day, combined with job insecurity, is a formula for political demobilization, for privatizing the citizenry. It works indirectly. Citizens are encouraged to distrust their government and politicians; to concentrate upon their own interests; to begrudge their taxes; and to exchange active involvement for symbolic gratifications of patriotism, collective self-righteousness, and military prowess. Above all, depoliticization is promoted through society's being enveloped in an atmosphere of collective fear and of individual powerlessness: fear of terrorists, loss of jobs, the uncertainties of pension plans, soaring health costs, and rising educational expenses.

Ultimately, who is to blame for the American public's passivity in the face of an escalating neofascist threat? Of course Republicans and other members of the "conservative" movement are the most clearly guilty. President Biden and the other leaders of the Democratic Party and the "liberal" or "centrist" leadership class are also responsible, to the degree they did not rapidly identify the threat and respond accordingly.

Right-wing libertarians and neoliberal gangster capitalists, who for years have longed who to destroy the commons and social democracy in order to create a society where profits rule over people in all areas of life, are also responsible. They weakened the social fabric to such an extent that it was much easier for neofascism to take root.

However this dark chapter in American history concludes, and whatever the next chapter may hold, there will be many Americans (largely white people in the privileged classes) who will exclaim in all sincerity: How could such a thing have happened? Are we not better than this?

The answer to such questions will stare back at them from the mirror every morning -- and even then they will deny responsibility.

Read more on the real and rising threat of fascism in America: