The savory, stewed comfort of these cabbage rolls is the perfect companion on a bitter winter night 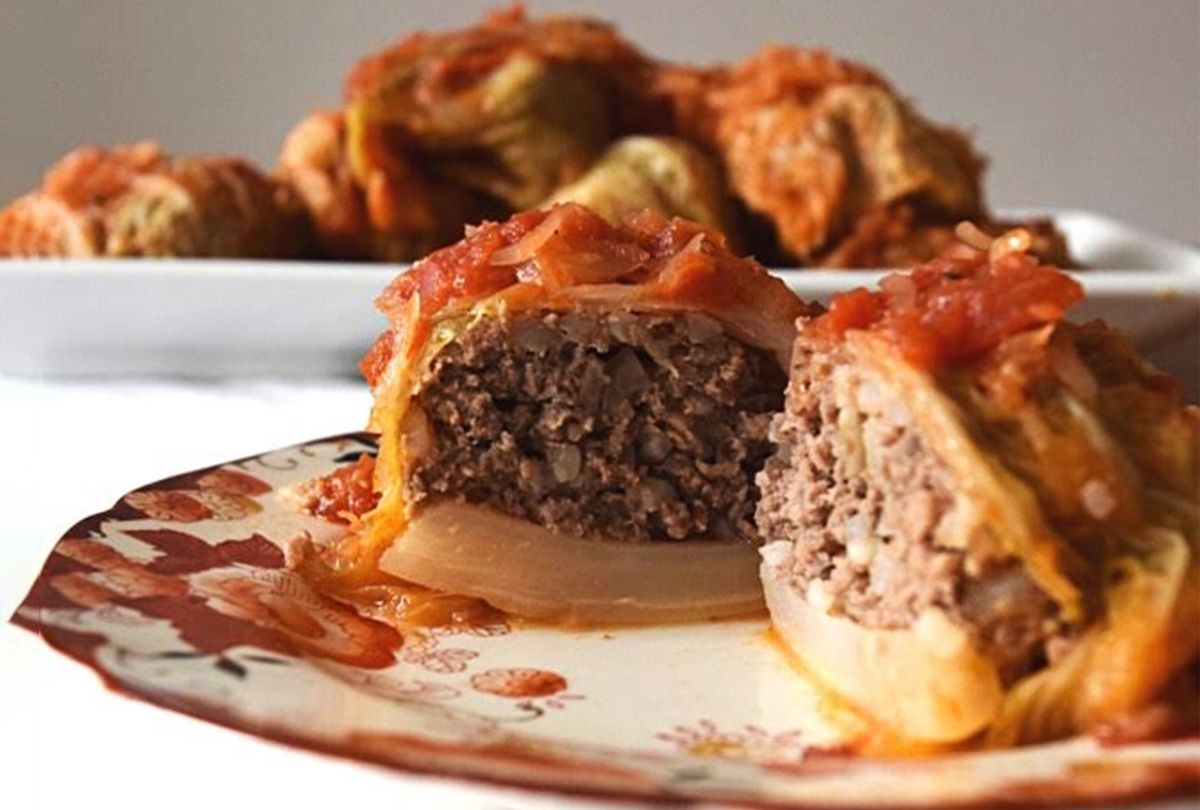 A recent Google search for "stuffed cabbage rolls" yielded some 17.8 million results, from Chinese fei cui bao rou stuffed with pork and mushrooms, to Lebanese malfouf with spiced beef and pork-filled Polish golabki with a dollop of sour cream on the side. The fillings spanned lentils, lamb and bison; some were bound with egg and flavored with cooked onions and garlic; others incorporated uncooked rice, while others still called for par-boiling the rice.

Almost every recipe I perused featured a lively and deep comments section, in which readers shared small epiphanies ("I line the pan with cabbage leaves"), ingredient swaps and additions ("parmesan!") or simply delighted aloud in finding a recipe close to what they'd grown up eating.

It briefly took me back to my recipe blogging heyday, when I shared my German Oma's stuffed cabbage rolls on my now-defunct Wordpress account in March 2013. It would prove the closest I ever came to going "viral" as a food blogger, by the way. Some half a dozen comments (from strangers!) appeared in my inbox within a matter of days. That's right, days.

RELATED: When you drink Chardonnay, the spaetzle get bigger

Alice wanted to know what liquid Oma used if she didn't have tomatoes. "Water and sauerkraut juice" was my uncorroborated reply. (That, or Oma would've made something else.)

Karen wondered if you could bake it in the oven or make it in a slow cooker. "Yes, either!"

Pam, who'd been searching online for a recipe just like her Oma's, thrilled at the new-to-her addition of bacon. Debbie's grandmother passed down a similar recipe (without the tomatoes and bacon) called pominy.

"Everything else is EXACTLY what we did," she wrote. "Dad complained if there was too much rice, and not enough meat, LOL."

Marilyn suggested freezing the cabbage whole for a few days rather than boiling it, to which Karen replied: "@ Marilyn … it totally sucks any flavour out of the cabbage."

Deb, on the other hand, was confused as to why the meat mixture looked raw in the step-by-step photos when the directions implied that it was pre-cooked, to which I apologetically clarified that everything but the beef went in par-cooked. (Inside, I nearly died of mortification about my unclear recipe writing.) 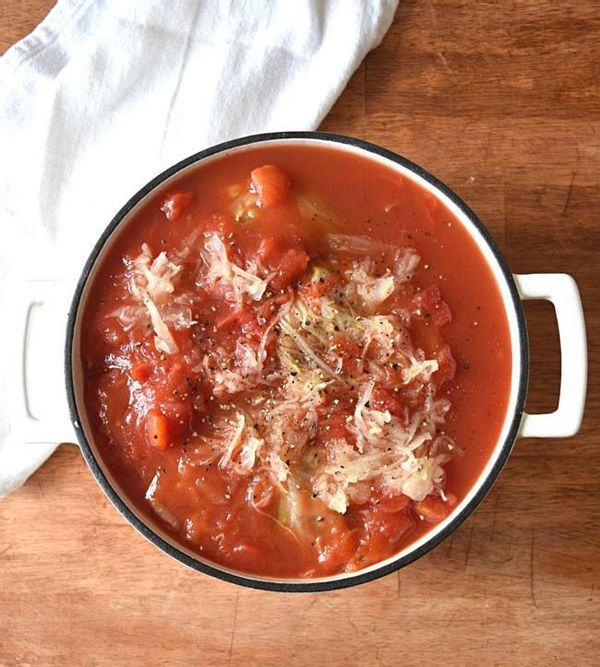 Stuffed Cabbage Cooking (Melisa Limanowski)Revisiting this spirited discussion was the first time I internalized what a gift this kind of recipe is, thanks to its endless variations and wide-reaching nostalgic appeal. My family recipe doesn't claim any remarkable flavor superlatives (except the tinge of smoke from the bacon, which indeed takes it over the top). Nor does it contain groundbreaking tips or techniques.

I make mine saucier than Oma did, but otherwise it's blissfully the same: ground beef, par-cooked rice and sautéed bacon and onions rolled up inside plain old cabbage leaves then stacked in my biggest soup pot to simmer in a tangy, unadorned sauce of tomatoes and sauerkraut.

Its savory, stewed comfort never fails to warm me through on those especially dark and bitter winter nights. And I always marvel when I retrieve each perfect little packet at the end of cooking, which forgives every lazy wrap job and torn cabbage leaf during assembly. Then again, I'm sure someone out there has figured out how to prevent the cabbage leaves from tearing. I sure hope they're active on the stuffed cabbage rolls comment boards this week.

Bring 1 cup of water to a boil in a small saucepan. Add the rice and cook for about 10 minutes, until cooked about halfway through (it will cook the rest of the way inside the cabbage rolls). Drain off any excess water and tip the rice into a large mixing bowl.

While the rice cooks, heat a large pot two-thirds full of salted water until boiling. Carefully add the whole head of cabbage and boil for 5 minutes. Remove and immediately plunge into a large bowl of ice water for 30 seconds, turning constantly to stop the cooking process. Set on paper towels to drain.

Place the diced bacon in a cold skillet with the butter. Turn the heat up to medium and slowly render the bacon until just starting to brown, about 5 to 7 minutes. Add the onion and a sprinkling of salt and pepper. Sauté until the onion is softened and slightly caramelized, about 5 minutes. Add the onions and bacon to the bowl with the rice. Then add the raw ground beef, eggs and another generous sprinkling of salt and pepper. Mix everything together with your hands until evenly incorporated.

To assemble the cabbage rolls, pull one cabbage leaf off at a time and place it on a cutting board with the inside facing up and the root end closest to you. (I used 12 leaves from a fairly large head of cabbage for this recipe.)

Place a few tablespoons of the beef mixture in the center of the leaf. Fold each side in toward the center so they're overlapping. (Don't worry if the cabbage leaves rip a little. Everything will come together when it cooks.)

Roll forward and away from you, tucking in the sides as you go like you're rolling up a burrito. Set the rolls seam-side down on a sheet tray and repeat until you've used up all the filling. Thinly slice about 1 cup of leftover cabbage and place the rest in an airtight container in the fridge for another use. Otherwise, seal the rest in an airtight container and put it in the fridge.

Place a 5-quart Dutch oven or other large, heavy-bottomed pot on the stove. Cover the bottom with a layer of sauerkraut (and extra sliced cabbage), then a layer of cabbage rolls. Season with a sprinkling of salt and pepper. Repeat this process until all the cabbage rolls are nestled inside the pot.

Pour the tomato sauce and diced tomatoes over everything. Fill the tomato sauce can with water and pour that over the rolls as well. Top with a little more sauerkraut and season again with salt and pepper.

Turn the heat to medium and bring the mixture to a simmer. Turn the heat down to low. (The pot should be lightly bubbling.) Cover the pot and cook the cabbage rolls for 2 hours, until the meat is cooked through and the cabbage leaves are tender.

To serve, place 2 rolls in a shallow bowl or on a plate. Top with a few ladles of the sauerkraut tomato sauce.

Stuffed cabbage rolls freeze beautifully. Place the cooked cabbage rolls and a few spoonfuls of sauce in airtight containers in the freezer for up to 3 months. The day you're ready to eat them, thaw them in the fridge for 8-ish hours, then reheat them gently over medium low on the stove.