From the costuming to the dialogue, Julian Fellowes' 1880s class warfare drama revels in its too-muchness 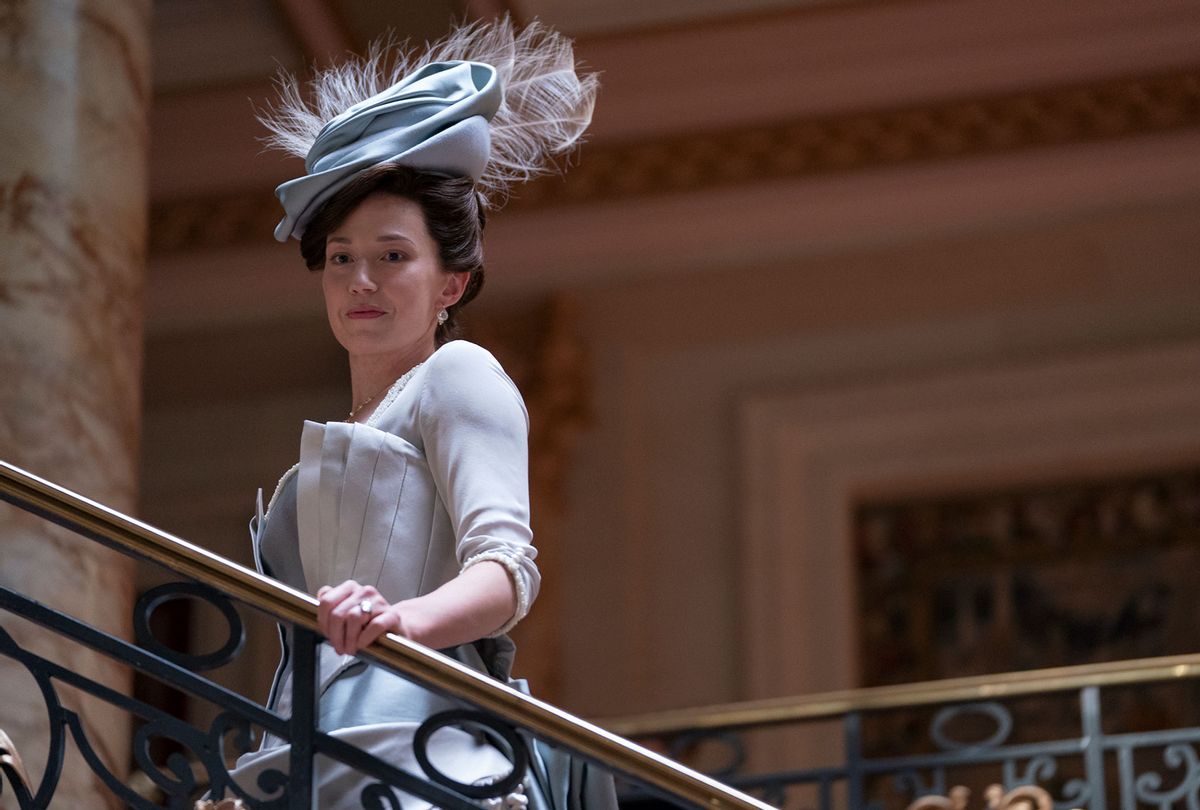 "The Gilded Age" theme song discernibly lacks the piano part that lent a warmth and grace to John Lunn's signature melody for "Downton Abbey." This is the first clue that Julian Fellowes' latest period drama is a different creature from his PBS showpiece, announcing the story's soul with forceful a string section in furious conversation with baritone brass swell.

One side is as demanding and impertinent as new money. The other is the voice of a dug-in, unmovable establishment. But the strings wash over the brass like the waves on an incoming sea storm.

Some might not immediately love Harry and Rupert Gregson-Williams' audacious composition for the very reason it works so well with the story. Like Fellowes' take on 1882 New York society, there's an unapologetic too-muchness about it that nevertheless builds upon what came before.

"The Gilded Age" was first announced in 2012 as an NBC series intended to recreate the magic of "Downton," only set in Edith Wharton's stomping grounds. This goes some way in explaining why its depiction of stupendous familial wealth feels equally as inspired by "Gossip Girl" and made for an audience that judges the value of a new prestige show by the faces on its cover.

Thus, we have Christine Baranski ("The Good Fight") and Cynthia Nixon ("And Just Like That") representing the old-money contingent as Agnes van Rhijn and her spinster sister Ada Brook, arsenic and old lace personified. They live across Fifth Avenue from George and Bertha Russell, Vanderbilt types played by Morgan Spector and Carrie Coon, frigidly cooing some approximation of a mid-Atlantic accent.

Agnes and Ada pride themselves on being descended from old New York stock, blue bloods who claim roots reaching back to the 1600s. To them the Russells are vulgar robber barons who came from nowhere, outfitted their garish palace with castoffs from European aristocracy and must never enter their social circle. 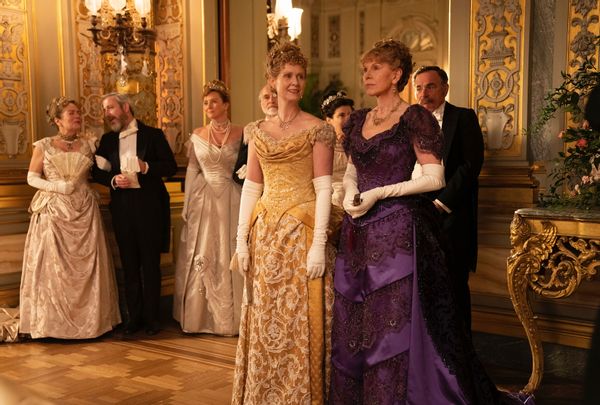 Never mind that the Russells' newly constructed home is palatial next to their own, built by a fortune that eclipses that of New York royalty like the Astors. They are nothing to society's old guard, and Bertha makes it her mission to crash its padlocked gates.

"The Gilded Age" plays like some overlap in a Venn diagram between "Dynasty," "Downton" and a mostly de-sexualized  "Bridgerton," and some people are going to hate that. One imagines literary purists puffing,  "Well, it's certainly nowhere near the level of our Edith!" and . . . they're right.

The counterpoint is that a good deal of the "Downton" viewership to whom this is designed to appeal probably read more literature by the likes of Julia Quinn – and please understand, that is not meant as a slight. Fellowes is a populist's period drama designer, which you can see in the costumes and set design and hear in the dialogue's zesty sprinkling of anachronisms.

Fellowes goes a bit wilder with them here, in fact, as he's channeling the cadence of Charles Lederer or other Hollywood Golden Age screenwriters into the dialogue. Those benefiting the most from this are Coon and Spector, who play their parts with the air of early 20th century film stars.

Spector makes George a charmer even when he destroys people, which he does; he's a bastard, but an admirable one. When it comes to business he has ice in his veins but his heart blazes for his wife and children. And he has a perfect match in Bertha, a brazen striver whose favorite six words consist of two phrases: "Until I say" and "When I say." To call them pre-Trumpian is accurate in the attitudinal sense but doesn't do justice to their panache and cleverness.

"Did you know they shot Jesse James?" George blithely tells his wife as he reads the paper to which she coolly replies, "He had his troubles; I have mine." At this he sweeps her off her feet for a loving embrace.

Like its public television predecessor, Fellowes' latest examines class stratification and prejudice through an upstairs-downstairs lens while widening the view from one household into several, but primarily navigates these two through a pair of well-meaning outsiders.

Agnes and Ada's unmarried, penniless niece Marian (Louisa Jacobson) comes from Pennsylvania to live with them after her father dies and befriends a Black woman, Peggy Scott (Denée Benton), along the way. Marian is entirely baffled about the labyrinthine rules of the social class while Peggy has both the blessing and the burden of sitting on its borders as an observer.

This in itself makes "The Gilded Age" noteworthy among corsets-and-silks types of pieces in that it attempts, albeit in the slightest of terms, to portray the era's race and class divisions without losing any of its confectionery appeal. 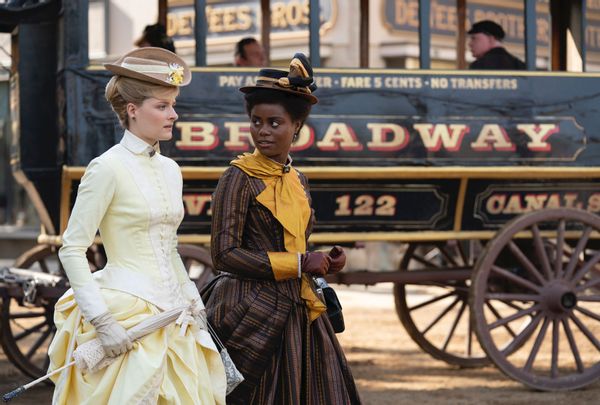 If you're looking for accuracy on this front, "The Knick" rings truer. But those seeking a series that includes Black characters within its fantasia of wealth and status and grants them a realistic version of both, may find that this one initially does a decent job of developing these characters with a sense of agency apart from the white upper-class world around which most of the story revolves.

Of the two ingenue roles, in fact, Benton's is the more engaging – especially when she's teamed with Baranski's "Good Fight" co-star Audra McDonald, who has a modest role as her mother. And one can see executive producer and director Salli Richardson-Whitfield's fingerprints on this part of the story as well, since Peggy is a talented writer who dreams of being published in a city, and country, and in a time, that valorizes white novelists and journalists.

Benton delivers a firmly planted interpretation of Peggy as a woman who knows who she is and what she's doing, and that includes placing herself inside a world determined to treat her as a lesser. But both she and Marian have a front-row view of what we know as history, with Marian hobnobbing with the Astor matriarch and Clara Barton and listening to scandalous gossip about the likes of J.P. Morgan, while Peggy received a front row view of the city's power brokers whose deeds and stunts make for terrific material.

Otherwise, Fellowes upcycles many of his "Downton" character types, with Baranski stepping into the Dowager countess role and Nixon taking on the part of her kindly foil Isobel Crawley. This also means she gets many of the best exchanges dripping with the type of polite poison that only vipers of a certain vintage can spray.

"Gilded Age" also has a scheming ladies' maid and a few delicate housekeepers, a closeted gay character determined to better his position and a battle ax of a housekeeper. Maybe that makes their various subplots predictable; possibly not. For his part Fellowes doesn't attempt to camouflage his return to the formula mine that made his fortune. "The vengeful lady's maid!" one of his gentleman remarks upon hearing gossip about a rival's household intrigue, adding, "Sounds like a character in a melodrama." Ha, ha.

What's important for the viewer is whether you see these remakes and enjoy how they're being employed in a broader and more ostentatious stage, or scoff at Fellowes' nearly precise lifts from Wharton or her male contemporary Henry James.

One front upon which "The Gilded Age" challenges us is to discern which side in the society battles is worth rooting for. As is Fellowes' way with his figures there are no pure black hats here, although he constructs the Russells in a way to make them more appealing to a modern audience than Agnes and Ada, who are uncharacteristically open-minded but still very much old society.

All of it dares a certain kind of "Masterpiece" acolyte to complain about missing the relative quietude of English countryside and nitpick over elocutionary details. The rest of us will be content to drool at each of Bertha's fabulous dresses or chortle at Agnes' quick comebacks. We'll always have the Granthams; in fact, their movie sequel is due to be released this year. But for now, to paraphrase Bertha, it's perfectly fine to want new friends, even ones whose egos and personalities can only be captured by an orchestra on full blast.