The "Sex and the City" spinoff attempts to be inclusive, but mainly as a back-up to its white woman trio 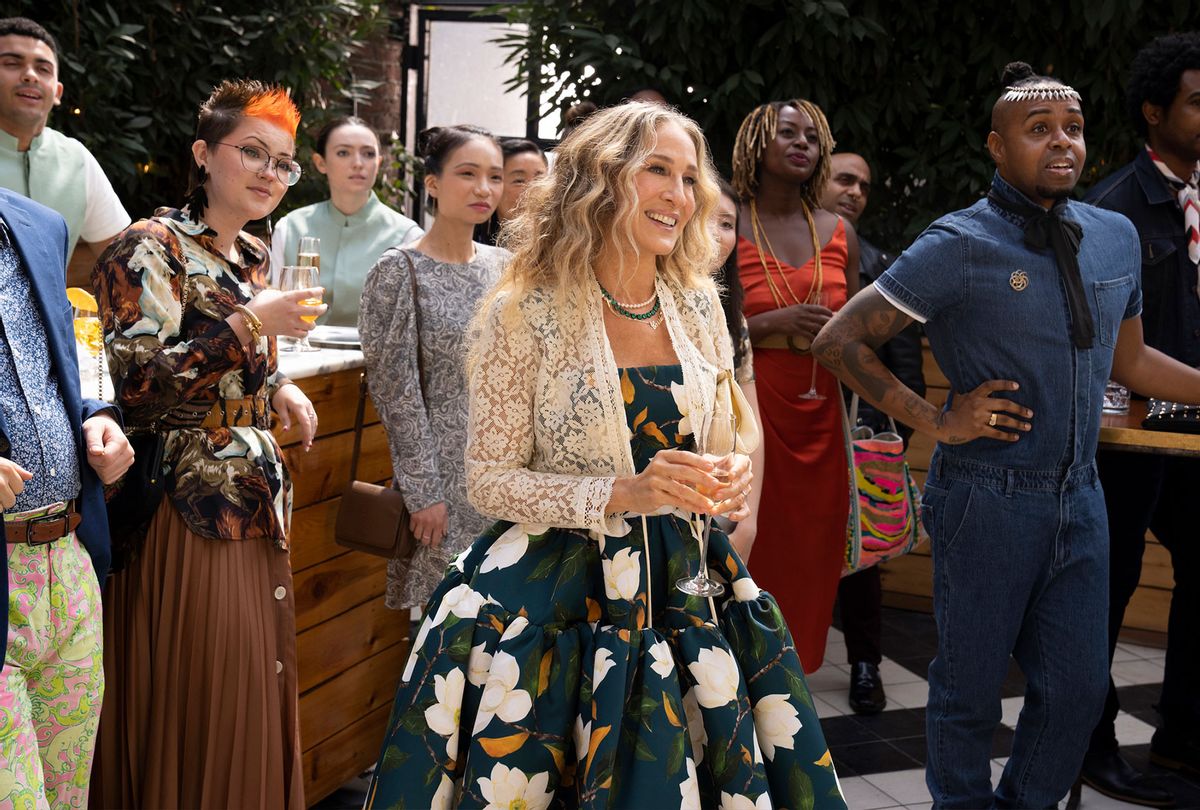 "And Just Like That…" covers a year in the life of Carrie (Sarah Jessica Parker), Miranda (Cynthia Nixon) and Charlotte (Kristin Davis) over its first season, but in many respects our fictional, fashionable besties barely moved beyond what we expected of them.

Executive producer and showrunner Michael Patrick King almost certainly would beg to differ with that, given the massive life changes Carrie and Miranda underwent.

Carrie loses the love of her life when John, aka Mr. Big, dies in the season premiere. He remains very present after he's gone, though. It takes her 10 episodes to set him free, along with herself, with a Paris journey to spread his ashes in the Seine – a trip from which Chris Noth was cut after several women claimed he sexual assaulted them.

Miranda dumps her job, then dumps her marriage to head west with her new love Che (Sara Ramirez), whom everyone hates, when they take a job in California to make a TV pilot.

RELATED: The fun 50s on "And Just Like That"

Out of all of them, Charlotte remains closest to the way we remember her while traveling the farthest from where she began, loosening her stranglehold on tradition and adherence to the Way Things Must Be. This is forced upon Charlotte by her child deciding she no longer wants to be known as Rose, but Rock, and doesn't want to be labeled as anything – including Jewish, a true inconvenience to one's parents at one's "they mitzah."

Old Charlotte would have canceled the party. Instead, she claims the celebration as her bat mitzvah, and why not? From the look of it, she and Harry (Evan Handler) spent a small fortune on the candy bar alone.

In the end, the overarching message is one of change. And yet, so much of what came before involved an unspoken audition for the empty fourth seat at the table.

This is not proverbial. In nearly every episode the ladies gather at a restaurant to dissect whatever issues are bedeviling them that week, a device "Sex and the City" employed with enough success to make brunch and cosmopolitans fashionable. Only this time, when the fourth seat wasn't empty, it was being filled by a rotation of guest diners, as if the ladies were auditioning their next top bestie.

This was the balancing act King and the writers struck between keeping Samantha in the series as a loving yet unseen presence and bringing in a new perspective – courtesy of a character who isn't white or necessarily straight.

The writers eased into it, seating Stanford Blatch (the late Willie Garson) first – who doesn't love Stanford? He called Charlotte on her uptight hesitance to include him in their reindeer games, as if to imply that he wasn't part of Carrie's A-team. Alas, Garson died in real life, and Stanford up and moved away, abandoning Mario Cantone's Anthony in the process. But Anthony has always expressly been Charlotte's main man, aside from Harry; more importantly, he fiercely maintains a life beyond these women.

From there is where things get . . . interesting. As the writers grappled with how to introduce new characters – specifically two Black women, Lisa Todd Wexley (Nicole Ari Parker) and Dr. Nya Wallace (Karen Pittman), along with Sarita Choudhury's Seema Patel – we see them mixing with the trio in their sacred restaurant settings with varying degrees of integration. And in each case, the success and plausibility of each of character's insinuation into the group corresponds to how much time they get to spend with all three at a four top. They are quite literally, if unconsciously, competing for a spot at a table.

Those who choose to rewatch are invited to look closely to see what I'm talking about. Charlotte's friend Lisa Todd Wexley meets Carrie and Miranda as they're enjoying a lunch date. Carrie and Miranda exit while LTW, as Charlotte calls her, sits down to nibble on someone else's fries.

Carrie and Charlotte have similar fly-bys with Nya, whose entire friendship with Miranda makes absolutely no sense – and yet, her infertility issues receive an extensive airing separate from Miranda's mess. Only, that is, after Miranda gives her airtime by shutting up about Che.

Later Nya and her husband have their own restaurant excursion with friends, entirely apart from anything Miranda, Carrie and Charlotte are doing – existing as a satellite to their lives as opposed to being fully woven into the mix. This is in addition to Nya's breezing over Miranda's cascade of racist microaggressions upon their first meeting, which she forgives without the two of them circling back to address it in any way that matters.

The only new friend who shares a table with all three of the "Sex and the City" O.G.s for an extended amount of time is Seema, who is single and sexy, and also the type of "ethnic" friend who offers Carrie a fashion shopportunity. Seema invites Carrie to her family's Diwali celebration and grants her permission to wear a sari to the event. Doing so, Seema explains, makes it "cultural appreciation" as opposed to cultural appropriation, which delights Carrie, a woman who's always on the hunt for unconventional fashion.

Anyway, this earns her the ultimate "in"-vitation, sitting at a restaurant with the rest of the girls as they plan Carrie's reintroduction to the dating world. This is something Samantha would have done, and yet, Seema is entirely distinct from Samantha. But the larger point this scene tacitly makes is that she's made it to the tier of intimates placing her in proximity to Carrie's nearest and dearest. Nya and LTW don't quite make it there.

I suppose we shouldn't expect a fully enlightened friend group blend from King, who explains his ethos regarding inclusion to The Daily Beast by saying, "What's in the world right now that wasn't in the world, on these characters' tongues, when they were 35? And what that is, is race, sex, privilege."

Give him and the rest of the show's producers some credit – at least they're trying. They're damn clumsy about it, but hey . . . they could have fallen back to the old "Sex and the City" view of New York. Nya, LTW and Seema women have always been in that world, proven by Seema and Carrie lamenting the death of the Barney's warehouse sale. Problem was, "Sex and the City" pretended they weren't. "And Just Like That…" tries to correct that massive slight, albeit in slapdash fashion, and while never quite figuring out how to integrate these new characters in a way that doesn't tokenize them.

Expanding the one-time foursome to a group of six, with Che on the outskirts along with the rest of the queer folks, would be a heavy lift for the most thoughtful writing team. My colleague Alison Stine already pointed out the many ways the show fails its queer characters by sliding into ancient tropes.

But Nya, LTW and Seema contend with another problem, in that they never quite move alongside their white counterparts as equal but, rather, supporting roles. Sympathetic viewers might give "And Just Like That…" a pass on that front in the first season, since so much revolves around the reintroduction of classic characters we haven't spent time with in a decade.

Nevertheless, in a show where having the right look is a central concern, it's a bit stunning to witness how imbalanced these relationships are, and how the development of plots involving characters of color are reliant on how much the three main white women decide to center them.

This includes the one between LTW and Charlotte, which is mainly propped up by Charlotte's ardent desire to have a powerful, chic Black friend. No kidding – when Carrie and Miranda ask Charlotte what's so special about Lisa, Mrs. Goldenblatt replies by rattling off the highlights of her LinkedIn page.

At least the awkwardness of their new friendship is plopped in the middle of the table in the fourth episode, "Some of My Best Friends," where Charlotte declares to Harry, "It is unacceptable that we do not have a more diverse friendship circle!" before walking into dinner at LTW's home, where they are the only white people.

Charlotte makes a couple of terrible mistakes before everyone acknowledges their discomfort and nervousness about saying the wrong thing when they only want to do their best. A few beats later Charlotte defends her friend diplomatically and passionately when her mother-in-law turns up her nose at the money LTW has spent on artwork, each piece of which is an investment item.

In that exchange Charlotte shows her passion for culture includes a high estimation for the contributions of Black artists. This isn't something Charlotte has to study – she simply knows. The gaze she shares with her new friend LTW is genuinely warm, confirming the start of something genuine.

Eventually – maybe – that will earn her a brunch invite.

All episodes of "And Just Like That..." are currently streaming on HBO Max.