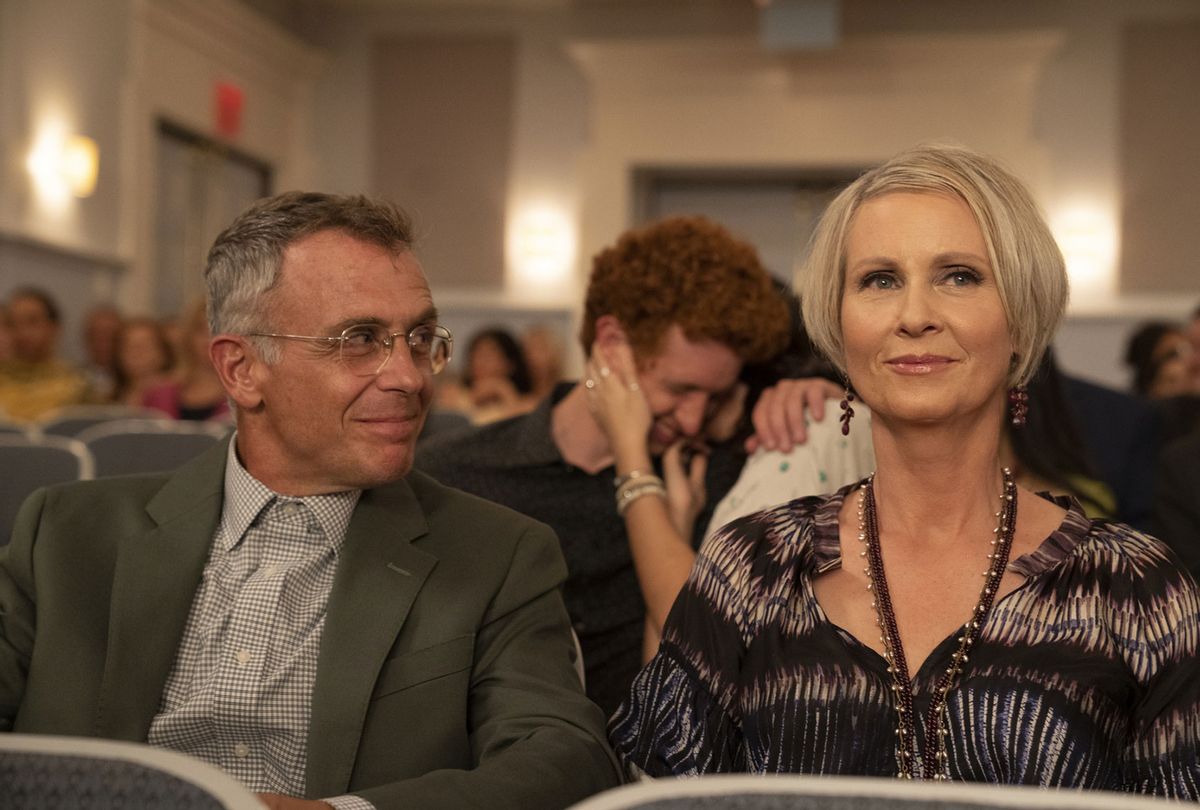 David Eigenberg and Cynthia Nixon in "And Just Like That..." (Craig Blankenhorn / HBO Max)
--

This article discusses a major relationship spoiler on "Sex and the City" sequel "And Just Like That..." If you're not caught up and don't want to know, stop reading now.

There are times when a TV show, even one we don't care much about, makes a person feel not so much seen as exposed. "And Just Like That..." pulls off that feat a few times this season in its glowy portrayal of womanhood in one's 50s, as a viewer might predict.

But if you're in a long-term relationship, as in one that's survived the seven-year itch at least once, if not a few times over, the scenes featuring Miranda and Steve's marriage may have set off alarm bells.

While he was alive, Big kept his romance with Carrie alive by bantering and dancing with her in their spacious kitchen. We see Charlotte and Harry lovingly tend to their two children and each other. Meanwhile, our first glimpse of Steve and Miranda together in this post-"Sex and the City" escapade shows them watching TV in a very sexless bed.

Steve requires hearing aids, rendering him immune to the sound of their teenage son Brady lustily rutting with his girlfriend in his bedroom, which shares a wall with his parents'. The two treat this like a minor nuisance, as if the situation has been going on for long enough to barely merit notice.

What they really aren't paying attention to is each other.

The next time we see them together, they're on the couch, bowls of ice cream in hand, selecting toppings from a neatly laid-out tray while watching TV. This reads as the kind of humble domestic custom that, like Steve, is easily taken for granted.

He goes on to describe the last couple of years as a time of stability, and a relief from riding the ups and downs of her affection for him or lack of it. They go out into the world and do their own thing, he says, after which "we come back here, home. To each other. Share the couch. We talk about Brady. Eat ice cream. Watch some TV. That's married life, Miranda. That's life."

That sounds lovely and cozy, and possibly painfully on the nose for couples who have been Netflix and chilling their way through this pandemic. Not that there's anything wrong with that. Streaming TV is the undisputed savior of COVID lockdowns, and if you've been able share it every day with someone you love and still like, consider yourself lucky.

However, to anyone whose partnership dates to the first time HBO introduced us to Miranda Hobbes (Cynthia Nixon) and Steve Brady (David Eigenberg), it may sound like Steve is describing an existential rut, the latest in a relationship defined by concession. This is only natural since Steve is the man Miranda settled for.

I've no doubt that this offends the Steve faithful, some of whom probably didn't identify as such until they met the person for whom Miranda is willing to upend her marriage, Sara Ramirez's Che Diaz. There are many reasons to hate on Che despite the earnest push by the writers to make them likeable and, in this situation, honorable.

Doing so out of loyalty to Steve isn't entirely fair even if it is understandable. Che runs in a circle adjacent to Miranda's while Steve has always known, without not entirely accepting, that Miranda was dating beneath her socioeconomic status in choosing him. 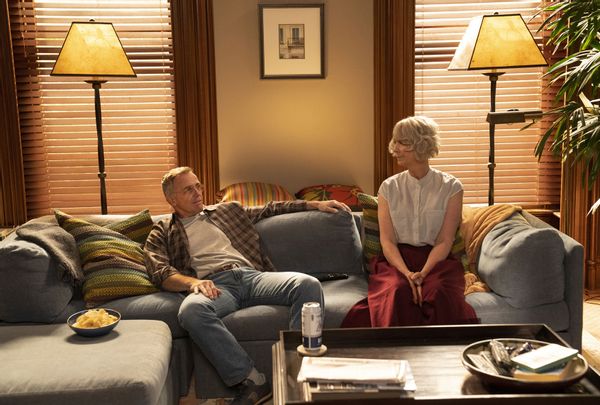 David Eigenberg and Cynthia Nixon in "And Just Like That..." (Craig Blankenhorn / HBO Max)

But people love Steve because he has always been humble and committed to Miranda, even when you count the time he cheated on her in the "Sex and the City" movie. Their marriage survived that because they put in the work to recover from his misstep and create new romantic sparks.

And now? Given the times we're in, when everyone is reassessing all the nooks and crannies of how they're living and so-called "gray divorces" (the term for marital dissolutions for couples in 55 years and older) are surging, Steve's portrait of marital stability sounds a lot like bliss for the average person while also looking like the definition of giving up. Every other man and woman in this show wears suits and designer dresses. You can't blame Miranda for wanting to ditch her sweatpants and rejoin chic New York any more than you can penalize Steve for wanting to tighten the strings on his own.

Letting things go isn't always a sin. In fact, "And Just Like That . . ." improves in the second half of its season by loosening Carrie (Sarah Jessica Parker), Charlotte (Kristin Davis) and Miranda's ties to their past lives so they can gracefully accept who they are in their 50s.

For Carrie, that has meant coming to terms with losing the two loves of her life: Big, who suddenly (and unnecessarily) dies of a heart attack, and Samantha, who dumped them all to start fresh in London. Charlotte's marriage to Harry is flourishing, and that helps her navigate the uncharted waters of her child Rose coming out as gender fluid.

Steve and Miranda fulfill the role they always have, playing out a version of a marriage that more closely reflects those of the average American than Carrie's and Charlotte's. That may be why Steve is seen as one of the rare truly good ones in this story – a good, salt of the Earth guy who knows how to retrieve jewelry out of a P-trap. Harry Goldenblatt is a gem. He would also probably opt to call a workman instead of dirtying his mitts.

And like the rest of us commoners, Steve and Miranda can't afford Harry and Charlotte's luxury brand of marital discord. You cannot bear grudges over gaffes committed during a doubles game of tennis when you can't afford a city club membership. Instead, they're saddled with the most COVID-relevant storyline of all, the one-two punch of Miranda's drinking problem and her midlife pivot, dumping Steve in the process.

The tragedy of it is that Steve is simply a decent guy who's a few beats out of step with the rest of Carrie's polished, wealthy crew, and who Miranda is obligated to bring along as the rest of them sail under their own power.

While this doesn't make me Team Miranda in this situation – if anything, I'm less patient with the character's flightiness now than I was when the season began – it does make a person realize that Steve was always going to be here at this point in their lives, when the couch represents the path of least resistance.

Steve is like so many of us. Miranda is too, if we're being honest. But he's also simply being the guy he's always been, that's the real heartbreaker. We've watched this couple live their way to this point in bits and pieces over many years.

"We've been together for a long time," he points out to Miranda in the last hurrah that fails to swerve her away from her choice. Later, after he's rescued Big's wedding ring out of a drain for Carrie – again, never count out a useful spouse! -- he points at his own and insists he's never taking it off. This may be a warning sign of impending stalker behavior or a vow to keep his devotion aflame. It could mean he's willing to fight for his marriage, or that he'll wait on that couch for Miranda's Che fixation to burn itself out.

Those of us watching may mull the value of and trap inherent to getting used to so much sameness after a couple of years of life being up and down every day. Maybe ice cream on the couch with the one you love is a good enough life. If it isn't, then beware the false comfort of settling.

The season finale of "And Just Like That..." debuts Thursday, Feb. 3 on HBO Max