Our big issue with "And Just Like That..." has nothing to do with the 911 debate 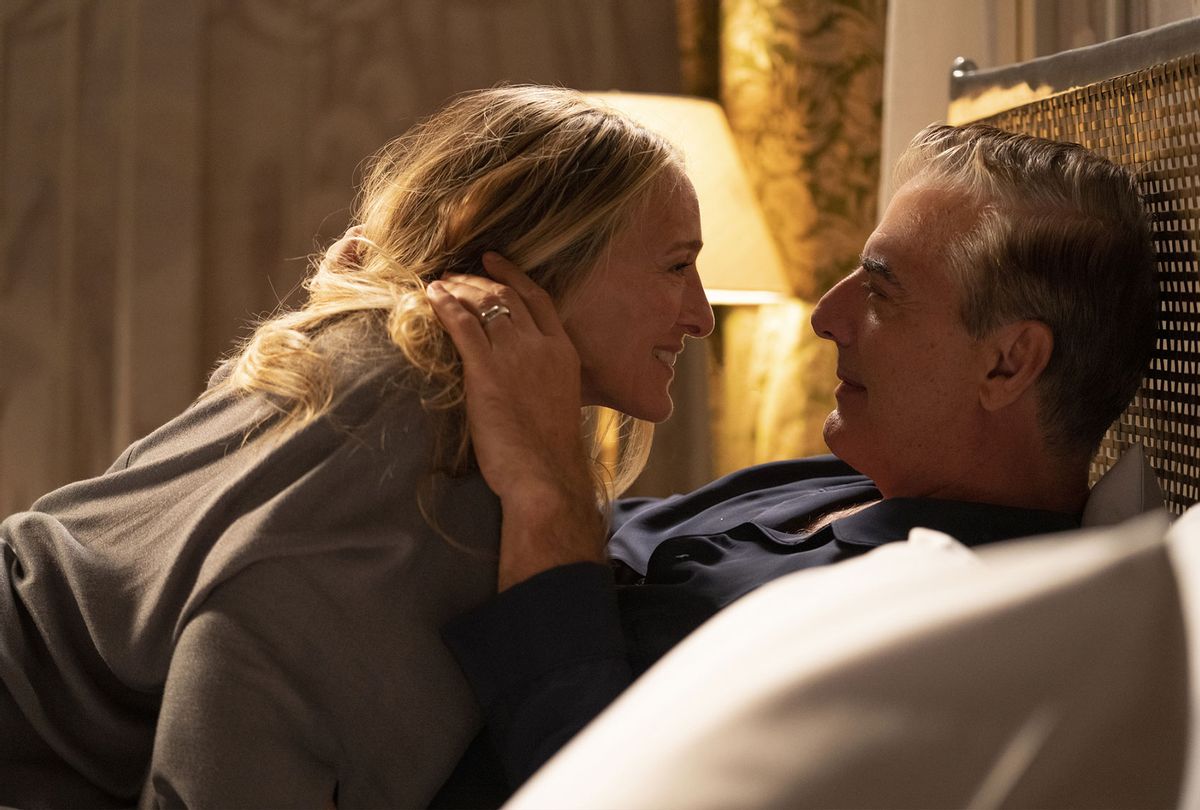 This article discusses a major death spoiler on "Sex and the City" sequel "And Just Like That..." and other deaths in series and movies that happened years ago. Nevertheless, if you don't want to be spoiled, stop reading now.

Presumably if you're reading this, you already know the story behind this holiday season's most colossal death – other than the annual passing of good taste, I mean. The Internet is abuzz with disbelief over the demise of a certain outsized presence within the "Sex and the City" universe, and not necessarily because said character will be missed.

For the most part, the problems people have with the cashing out of Carrie Bradshaw's (tainted) love of a lifetime Mr. Big (Chris Noth) in the "SATC" sequel "And Just Like That . . ." are in the execution. Granted, some of us are truly sad to lose the guy for the same reasons we're compelled to chase any emotionally unavailable lover. Big was the ultimate in that department. No matter what he did to push Carrie away, she kept running back to him.

Now that he's taken that leave from which there is no return, the main question is whether his fatal heart attack was avoidable. Should he have been blasting through that 1,000th Peleton ride with his heart condition? Could Carrie have saved him if she had called 911 and administered CPR instead of yelling "John! John!" and cradling him in the shower as he blinked out?

A cardiologist confirmed to Vulture that the answer is yes on both counts.

However, the bone I must pick with this whole development speaks to problem that's larger than the circumstances of Mr. Big's trip at that giant steak house in the clouds: I should not have seen it coming.

Please understand, I am not one of those killjoys who delights in sniffing out twists. I was genuinely knocked sideways by Bruce Willis' situation in That Movie. I refuse to monitor clue-hunting forums dedicated to solving puzzle shows, preferring to find out the true nature of Dolores Abernathy's reality in "Westworld" in real time with all the other rubes.

Meaning, if I called Big's death long before he suited up for his final ride with his favorite instructor, Allegra, that is a problem. That's an early sign of lazy writing, which doesn't portend a positive outcome for this show.

When did I know? Sometime after Carrie, during a rare sexy moment within this decidedly unsexy comedy, asks Big to put on a show for her. He raises an eyebrow, admits surprise, and reaches for the bedside table. For lube, he explains. "I thought you were reaching for your emergency nitroglycerin pill," she jokes with a "ha ha old man" lightness.

This doesn't necessarily qualify as the episode's equivalent of Chekhov's gun, but it does remind us that Big has heart a condition, established in the sixth season "Sex and the City" episode titled "The Domino Effect." By that point other signs and portents have dropped. Before their chaste made-for-TV sexual interlude Carrie and Big dance in the kitchen, proving there's still magic in their marriage by indulging in their lockdown ritual of playing the album du jour from Big's vast vinyl collection. On this night the selection is Todd Rundgren – "That's my favorite f**king album!" Big hoots, before launching into its opening verse.

Death, in its capacity as an unseen TV character, loves to be tempted with love songs about breakups. Honestly, if there's an anti-Cupid, the Man in Black is it.  And I'll credit Michael Patrick King, who both wrote and directed this episode (as he did "Sex and the City 2," never forget) for not making that night's song selection a cut from Blue Oyster Cult's catalog, because that really would have clanged the cosmic cowbell.

But there are any number of tropes that signal death is at the door, like showing the doomed character indulging in risky activities he deems ordinary ("The weekly cigar and Allegra on the same night?"). Or his soon-to-be widow pulling out a meaningful accessory she hasn't worn in a while on a whim (the blue wedding shoes!). Then they drop one of the most potent death lures around: a change in plans ("I was thinking, if get home early enough, maybe we can drive out east tonight. Would you be up for that?").

A writer can get away with stacking a few of these into an episode without raising too much of an alert. But King stuffs Carrie and Big's remaining hours on this Earthly plane together with Polaroid-perfect romantic moments, one after the other, none of which appear to move her story forward. 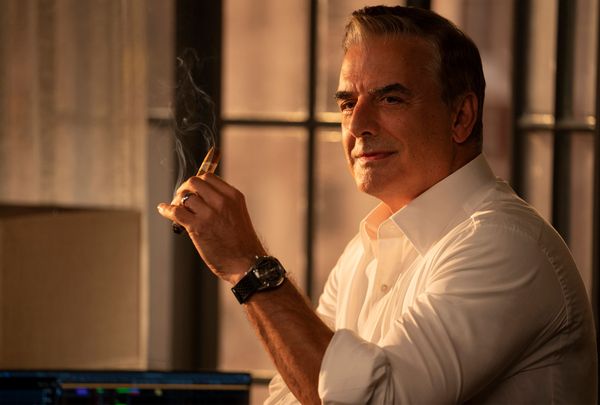 If we didn't suspect Big was on his way out when the shoes clacked out of the closet, surely when Carrie turns around on her way out the door to gaze at Big one more time, for no apparent reason, you could sense something was amiss. I mean, the man is framed by their the apartment's window, softly lit, nary a hair out of place and arms crossed in a full "Cigar Aficionado" cover model pose. He smiles and says, "I'm just looking at you. " And just like that . . . I knew he was goner.

Moments later, as he keeled over while Charlotte's daughter sails through the presto agitato section of Beethoven's "Moonlight Sonata," I resented being proven correct. And that was before the idiotic failure to call 911 or at least grab the emergency nitroglycerin pill she knew was in the bedside drawer.

What constitutes a good TV death? There are many correct answers to that question along with scores of wrong ones. Television is a veritable charnel house containing the bones of characters who died unnecessary or stupid deaths. Many sport the tatters of red shirts.

But from my point of view, a major character deserves to go out in a way that catches us off guard, that changes the story in a significant way and doesn't brazenly telegraph their departure. Think of the utter shock of Poussey's senseless killing during a mealtime uprising on "Orange Is the New Black," when a guard crushes the breath out of her. Before Poussey's death, she was . . . living.

So was Nate Fisher before his last conk-out in "Six Feet Under." In fact, he created a problem that would haunt his survivors for all time by screwing a woman who wasn't his wife and then, shortly afterward casually remarking, "My left arm is numb . . . numb . . . arm . . . NARM!" Famous last words that include one that isn't a word.

For "Buffy the Vampire Fans" the GOAT may be "The Body," but Buffy's blithe comments to her mother as gets home in the previous episode, before she notices her cold corpse on the floor – that's the gutting part. Back in the day, we agonized for a full a week before the story confirmed Joyce Summers was gone. That is the power of a good character death.

Even if we know an actor is leaving the show, the nature of their character's egress should remain a mystery until it happens. Case in point: Dan Stevens announced moving on from "Downton Abbey" prior to the season that Matthew Crawley is written off. We knew Stevens was leaving, but Matthew's fatal car accident came out of nowhere, albeit at the height of his joy. (DING-DONG!)

And to clarify, I'm not including characters who are part of shows where death is part of its engine, like "24" or "The 100."  "Lost" is a bit of an exception, in that the deaths were almost always unexpected and, similarly,  also almost always well-earned and creatively carried out. (RIP Charlie, and thanks for letting the living know that was Not Penny's Boat.)

On procedurals and ridiculous thrillers featuring bullets, explosives and psychopathic randos roaming around, we enter each episode expecting someone may not make it through the end credits upright.

Then again, it's been 30 years since "L.A. Law" dropped its resident wicked witch Rosalind Shays down an elevator shaft in the middle of an uncomfortable conversation she'd never finish, and even though the show isn't streaming anywhere, those who saw it will never forget.

The list of memorable, shocking and tragic "good" TV deaths is much, much longer that what's listed here. But the common qualification is that we do not see them coming – not even Charlie's – because the writers prioritized realism over maximizing emotional impact.

Taking that level of care of one's characters proves they're thinking seriously about the loss' impact and how it will complicate what comes next. Mind you, Big's death is followed by the world's chicest minimalist funeral, allowing Carrie to serve up quite the lewk. But if Big's death is meant to awaken Carrie and the rest to a fresh purpose in this new chapter, I shudder to picture the quality of the prose spelling out that part of the story.

For various reasons, a few having to do with King's track record with the "SATC" movies, expectations already were not high for "And Just Like That." Despite that, with the right handlers the show could have sobering and inspiring truths to convey about what it means to be older and single in a society in which women who are Carrie's age are tacitly expected to either resign themselves to invisibility.

If there are exceptions to that unspoken (and untruthful) rule about a middle-aged woman's irrelevance, it should be Carrie Bradshaw.

In the original series, the thought of being older and unmarried made 30-something Carrie seize up with dread. That's also why some people felt betrayed that the woman who chose herself at the end of one season leaps at the chance to be rescued by Big in the series finale. Most folks were delighted that Carrie's prince came to Paris to get her, without questioning why that was an acceptable goal for a supposedly independent-minded woman. Later he'd abandon her at the altar.

It was Mr. Big's time. That much we can probably agree on. His track record as a boyfriend was spotty. It took him a couple of times to get him to show up to the altar and stay put long enough to marry Carrie. The fact that these two make it for as long as they did is a miracle, even in TV fiction terms.

But even difficult men deserve a thoughtful exit. If "And Just Like That" can't get that guy's goodbye smooch right, how can we trust our heroine's next chapter to the people responsible for mucking it up?

New episodes of "And Just Like That..." premiere Thursdays on HBO Max.