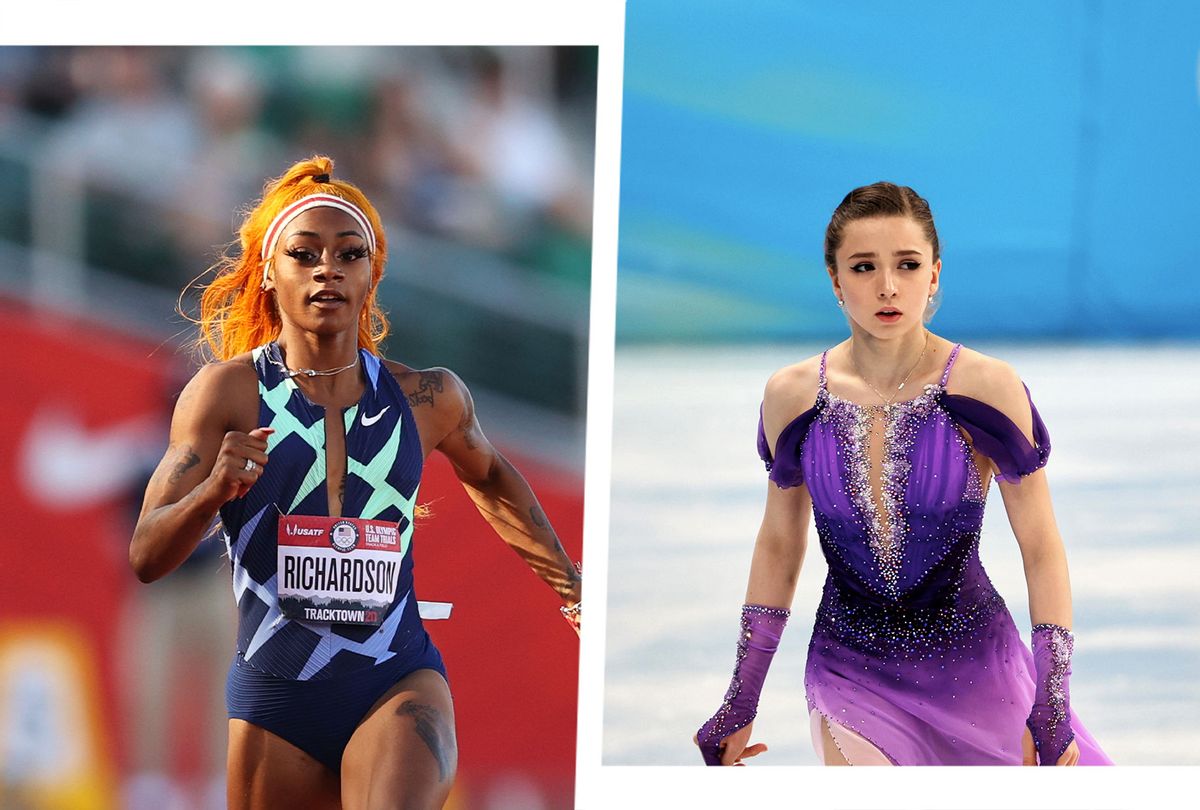 The Court of Arbitration for Sport's (CAS) decision on Monday to allow Russian figure skater Kamila Valieva to continue competing after a positive drug test quickly spurred outrage amongst those within the athletic community, especially former Olympians. In particular, the decision attracted the attention of a notable track & field star, who wasn't treated that leniently in a similar situation.

U.S. sprinter Sha'Carri Richardson first shocked the world after winning the 100-meter dash in last summer's Olympic trials. She shocked the world a second time when she tested positive for marijuana and was forced to serve a mandatory 30-day suspension and opt out of the Tokyo Olympics. During an interview on NBC's Today show, Richardson apologized for her actions and explained that she started using cannabis to help cope with her mother's death.

Commenting on a USA Today post disclosing the news allowing Valieva to compete, Richardson noted that the only difference she could see between her situation and the skater's was race.

"Can we get a solid answer on the difference of her situation and mines?" Richardson wrote. "My mother died and I can't run and was also favored to place top 3. The only difference I see is I'm a black young lady."

Valieva, who is just 15 years old, made history after becoming the first woman to land a quad jump — which touts four rotations — during the figure skating team event. The Russian Olympic Committee later won gold but were not awarded their medals due to Valieva's positive test. The recent CAS decision cleared Valieva for competition in the individual programs but prohibits her from attaining a medal if she secures a medal contending spot.

Former figure skaters, who've also been subject to the same doping rules as Valieva, also voiced their displeasure at the unfairness of allowing her to compete. Before and during the women's singles short program on Tuesday, former ice skaters and commentators Johnny Weir and Tara Lipinski agreed that Valieva should not be allowed to skate.

"It's not just about her skating or not skating," Lipinski said. "It's affecting everyone at these Olympic Games to think that there's going to be no medal ceremony if she's on the podium. . . I can't even comprehend that. Imagine how it's affecting so many other skaters' lives and their experiences." Lipinski, who won gold in the 1998 Nagano Olympics, added that the decision is "putting a permanent scar on our sport."

Weir agreed with Lipinski, "The Olympics were everything that I ever dreamed about, everything that kept me going on the day-to-day and to have that experience and that feeling . . . diminished because of a positive drug test on one of your competitors when everyone else adheres to the rules . . . it's a slap in the face to every other skater."

Both THC and trimetazidine — the heart medication found in Valieva's sample — are recognized as banned substances by the World Anti-Doping Agency. Richardson specified in a separate tweet that THC is not a performance enhancer. But trimetazidine, on the other hand, increases blood flow and may improve endurance, allowing athletes to compete and train in rigorous conditions.

A recent report from The New York Times also found two additional metabolic enhancers in Valieva's sample: Hypoxen and L-carnitine. Both substances are not banned but their presence alongside trimetazidine and in such a young athlete was regarded as "highly unusual" by an antidoping official.

CAS also explained that Valieva's status as a minor played a large part in their overall decision and noted that Richardson was 21 years of age at the time of her positive test.

"In terms of Ms. Richardson's case, she tested positive on the 19th of June, quite a way ahead of the (Tokyo) Games," IOC spokesman Mark Adams said, per Yahoo! Sports. "The results came in early in order for USADA to deal with the case on time, before the Games. Ms. Richardson accepted a one-month period of ineligibility that began on June 28. So I would suggest that there isn't a great deal of similarity between the two cases."

The answer still feels unsatisfactory and frankly puzzling. It seems that Valieva's status as a minor shouldn't be used as an excuse to bend the rules, rather it should be a reason to uphold the rules to allow her – and those who mentored her – to learn from the mistake. At 15, she's young enough to still be eligible to compete in another Olympics, one in which a medal-winning performance won't be tarnished by one athlete's disregard for fair play.