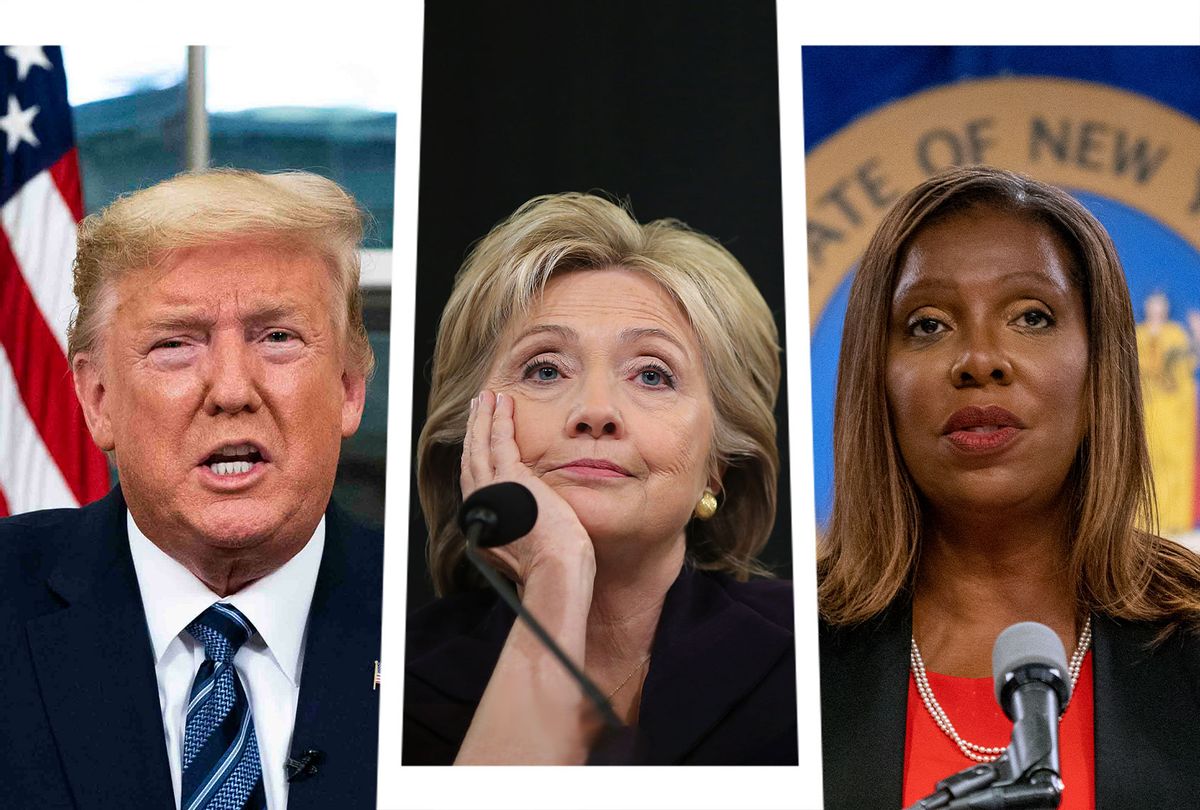 Donald Trump's lawyers turned a Thursday Manhattan Supreme Court hearing into a spectacle, before a judge issued a ruling against the former president.

Lawyers for Trump sought to block New York Attorney General Letitia James, who is investigating the Trump Organization's business dealings, from interviewing Trump, Donald Trump Jr. and Ivanka Trump under oath. Judge Arthur Engoron rejected the motion and ruled that James can enforce her subpoena, but not before Trump's lawyers demanded that James investigate former Secretary of State Hillary Clinton based on a debunked conspiracy theory instead.

"Ms. James, are you going to go after Hillary Clinton for what she's doing to my client?" Trump attorney Alina Habba said, according to Insider. "That she spied at Trump Tower in your state? Are you going to look into her business dealings?"

Engoron shut down the argument, noting that "the Clintons are not before me."

Habba's allegation appeared to be a reference to a misconstrued court filing by Justice Department special counsel John Durham, who was appointed during the Trump administration to investigate the origins of the Trump-Russia investigation. The filing accused former Democratic attorney Michael Sussman of obtaining nonpublic information from the White House through a tech executive who had legal access to the data. Trump and Fox News have falsely hyped the filing as proof that Clinton spied on the Trump White House.

In a filing on Thursday, Durham actually dismissed the false Fox News reports, clarifying that the incident happened during the Obama administration, not while Trump was in office.

"If third parties or members of the media have overstated, understated or otherwise misinterpreted facts contained in the government's motion, that does not in any way undermine the valid reasons for the government's inclusion of this information," the filing said.

At another point in the hearing, Habba argued that Trump should not have to testify in the probe because he is a member of a "protected class," a term that typically refers to groups or communities that qualify for special protection against discrimination.

"If he was not who he is, she would not be doing this, your honor," Habba said, according to CNBC. "That's what my argument is."

The judge wasn't having it.

"The traditional protected classes are race, religion, etc.," Engoron retorted. "Donald Trump doesn't fit that model. He's not being discriminated against based on race, is he? Or religion, is he? He's not a protected class. If Ms. James has a thing against him, OK, that's not in my understanding unlawful discrimination. He's just a bad guy she should go after as the chief law enforcement officer of the state."

Habba repeatedly accused James of political bias during the "heated" hearing, prompting Engoron and his clerk to literally "call a timeout" by raising their hands in the shape of a T, according to The New York Times. Habba was repeatedly admonished by the judge and his clerk to "stop interrupting them to try to tarnish the attorney general's motives," according to Law & Crime.

Engoron in his ruling rejected the argument, saying it "completely misses the mark."

"In the final analysis, a State Attorney General commences investigating a business entity, uncovers copious evidence of possible financial fraud, and wants to question, under oath, several of the entities' principals, including its namesake. She has the clear right to do so," he wrote.

The ruling marked the latest in a string of legal defeats for Trump. Since leaving office, he lost his Supreme Court bid to block his tax returns from the Manhattan district attorney, who is leading a criminal investigation into the Trump Organization. Last month, the U.S. Supreme Court, including all three of Trump's appointees, rejected his attempt to shield White House documents from the House committee investigating the Jan. 6, 2021, Capitol riot. Just days before Thursday's hearing, James released a letter showing that Trump's longtime accounting firm Mazars has cut ties with the former president. The firm now says that nearly 10 years of the Trump Organization's financial records are unreliable.

"Today, justice prevailed," James said in a statement after the hearing. "No one is above the law."

Trump slammed the decision, accusing the judge of bias against him. "I can't get a fair hearing in New York because of the hatred of me by Judges and the judiciary," he said in a statement.

Trump is expected to appeal the ruling. But even if higher courts uphold it, that doesn't mean Trump and his kids will be forced to answer James' questions. Her office has previously questioned Eric Trump, who invoked his Fifth Amendment right against self-incrimination more than 500 times during the six-hour deposition.

Attorney Ronald Fischetti, who represents Trump in the criminal investigation, demanded that the judge grant Trump immunity in the Manhattan probe if he is forced to testify in James' investigation.

"If she wants sworn testimony from my client, he's entitled to immunity. He gets immunity for what he says, or he says nothing," he said.

Engoron said the rest of the Trump family could just do what Eric did. "Can't they just refuse to answer?" he asked. "Isn't that what Eric Trump did 500 times?"

In his ruling, Engoron said it would have been a "blatant dereliction of duty" if James had not subpoenaed the Trump family members, given the "thousands of documents" her office provided to show sufficient basis for the investigation.

"Indeed, the impetus for the investigation was not personal animus, not racial or ethnic or other discrimination, not campaign promises," he wrote, "but was sworn congressional testimony by former Trump associate Michael Cohen that respondents were 'cooking the books.'"