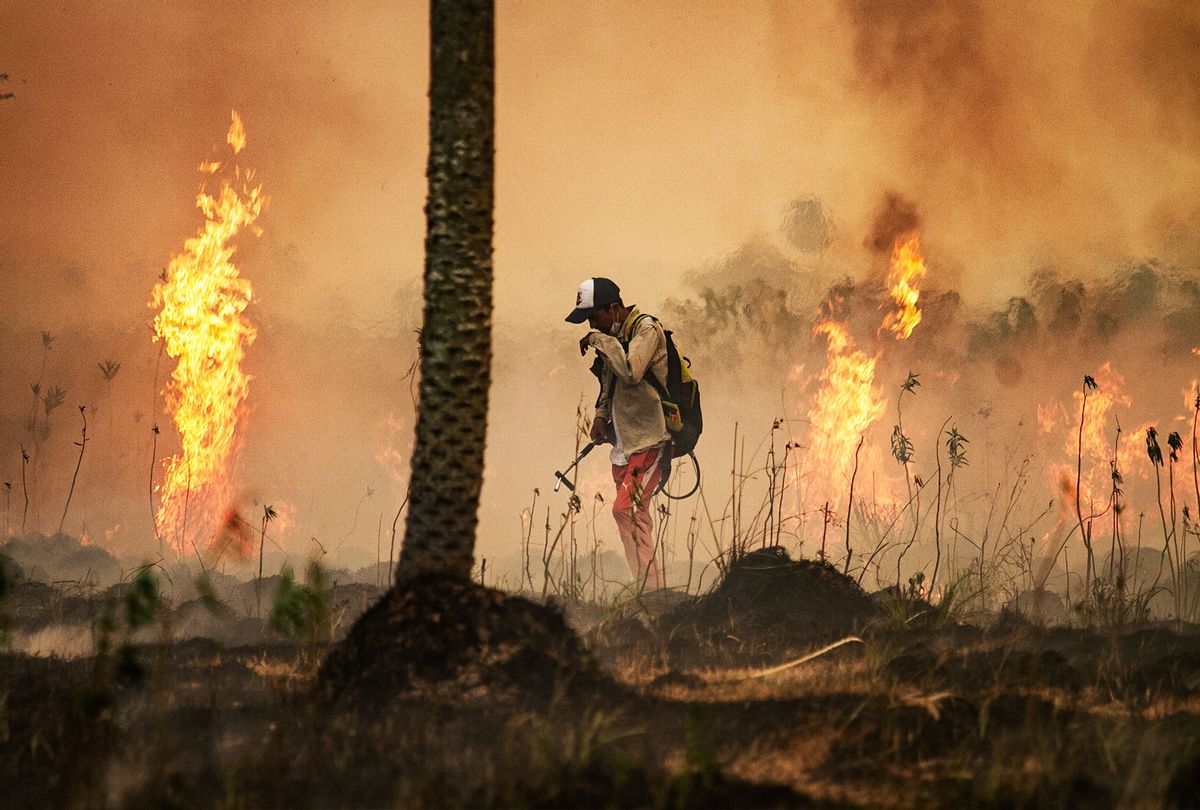 Firefighters and volunteers try to contain the flames destroying forests and wildlife in Corrientes, Argentina on February 19, 2022. (Joaquin Meabe/Anadolu Agency via Getty Images)
--

A blunt report from a United Nations panel on climate change says humanity is running out of time and options to reverse course on the climate and avoid permanent damage.

The findings — which come from the Working Group II of the Intergovernmental Panel on Climate Change's Sixth Assessment Report — are a scathing indictment of governmental responses to climate change worldwide. Without immediate and drastic cuts to fossil fuel consumption, the toll on human life will be profound, the report states.

"This report is a dire warning about the consequences of inaction," said Hoesung Lee, Chair of the IPCC. "It shows that climate change is a grave and mounting threat to our wellbeing and a healthy planet. Our actions today will shape how people adapt and nature responds to increasing climate risks."

Building on the previous findings, the report indicates radical action is now necessary to curb climate change after 30 years of insufficient governmental responses to the global threat since the UN first assembled the IPCC to assess the risks of human-induced climate change. Their message was clear then, and it is only more urgent now. Climate action is a matter of survival for millions of people.

Even if emissions of greenhouse gases were to cease immediately, climate change will continue for years due to the effect of emissions already released, as the report details. Notably, nearly half of the Earth's population — between 3.3 and 3.6 billion people — live in areas that will experience adverse impacts as a result. Moreover, the devastation is becoming biblical in nature as severe droughts, floods, fires, famines, and storms become more prevalent in addition to rising sea level, ocean acidification, harmful algal blooms, and further damage to fragile ecosystems and the people who depend on them or live near them.

"Nearly half of humanity is living in the danger zone – now," remarked United Nations Secretary-General António Guterres. "Many ecosystems are at the point of no return – now."

Even in the lowest emissions scenario presented by the report, global temperatures will almost certainly reach the threshold of 1.5ºC in the next couple of decades. Adaptation could still prevent some of the worst impacts if warming does not exceed that threshold.

At this point, the best-case-scenario modeled in the report would require a drastic slash in global emissions by nearly half current levels by 2030 and net-zero emissions by 2050. The report notes that such an outcome would require a concerted effort on the part of governments, corporations, and individuals to phase out the use of fossil fuels in particular. Beyond such an ambitious goal, regions most vulnerable to and least responsible for climate change — small island nations, low-lying coastal regions, arid and semi environments — are likely to become uninhabitable. Mass migration is likely to force an influx of refugees to less vulnerable countries as climate change drives the displacement of people.

"Unchecked carbon pollution is forcing the world's most vulnerable on a frog march to destruction – now," Guterres added. "The facts are undeniable. This abdication of leadership is criminal. The world's biggest polluters are guilty of arson of our only home."

Renewed efforts to curb emissions following COP26 are simply not enough to meet these goals. Greenhouse gas emissions are still set to rise 14% by the end of the decade under the current intergovernmental regime of climate action.

The report also cites the United States as the greatest contributor to both emissions and divisive rhetoric preventing climate action in North America, which with just 6.4% of the global population produces a quarter of all greenhouse gas emissions.

Though climate deniers would like to believe otherwise, there is not a debate among scientists; climate change is readily observable. Currently, the Earth is 1.1ºC warmer on average now than it was before industrialization; that is a scientific fact.

By nature, scientists will rarely predict anything with a high level of certainty. In that regard, science is rather conservative: you would be hard pressed to get any scientist worth their salt to say anything is 100% certain. There is always a margin of error, but virtually no doubt remains at this point that human activity is warming Earth. To put it in perspective, scientists have as much confidence that we are causing climate change as they do that gravity exists. The report is culmination of tens of thousands of scientific papers in a synthesis and analysis of decades of scientific research on the subject.

"The scientific evidence is unequivocal: climate change is a threat to human wellbeing and the health of the planet," asserted IPCC Working Group II Co-Chair Hans-Otto Pörtner. "Any further delay in concerted global action will miss a brief and rapidly closing window to secure a liveable future."

Scientists also indicate in the report that impacts will vary as climate change interacts with a multitude of emerging and preexisting global trends. Unsustainable resource use, urbanization, social inequity, and other global crises such as a pandemic also present a massive challenge to sustainable development.

"Our assessment clearly shows that tackling all these different challenges involves everyone – governments, the private sector, civil society – working together to prioritize risk reduction, as well as equity and justice, in decision-making and investment," said IPCC Working Group II Co-Chair Debra Roberts. "In this way, different interests, values and world views can be reconciled. By bringing together scientific and technological know-how as well as Indigenous and local knowledge, solutions will be more effective. Failure to achieve climate resilient and sustainable development will result in a suboptimal future for people and nature."

Read more on the climate crisis: