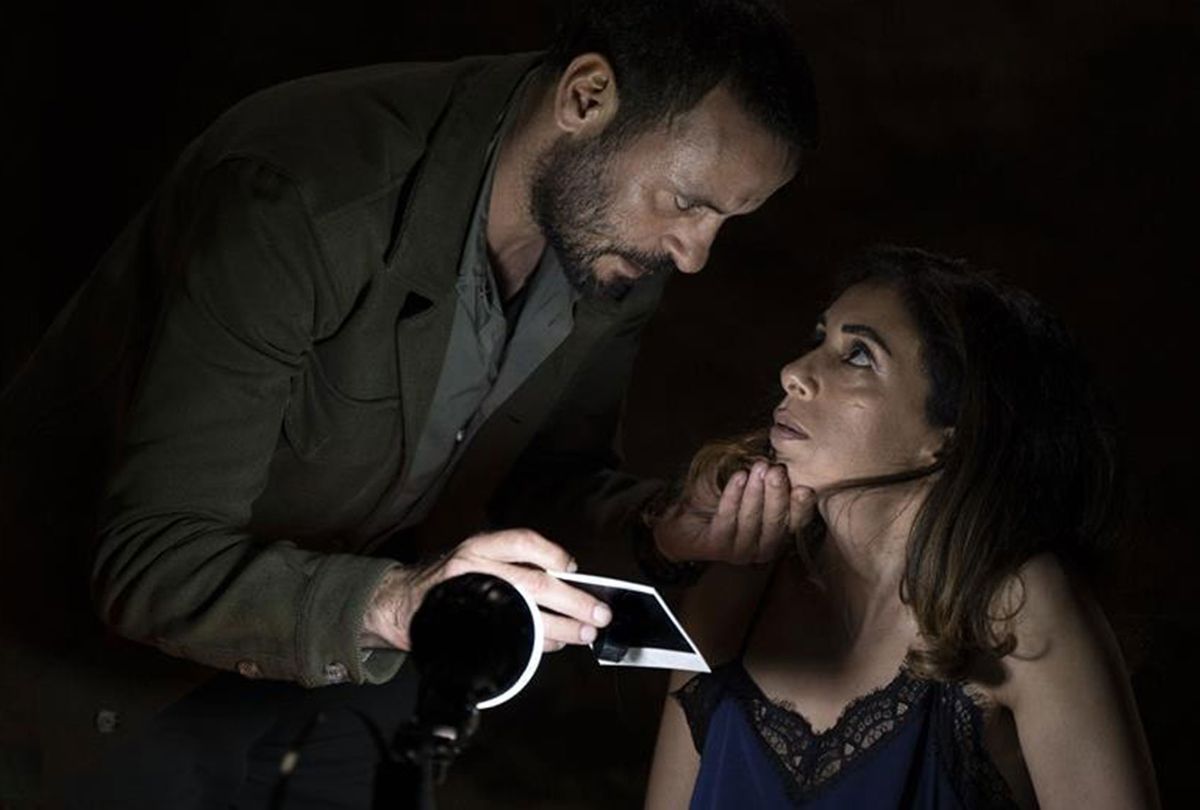 Hany Abu-Assad's gripping thriller, "Huda's Salon" is based on true events. In Bethlehem, Reem (Maisa Abd Elhadi), a Palestinian, is getting her hair done by Huda (Manal Awad). But after she sips some coffee, she starts to feel unwell. Reem has been drugged by Huda, who photographs her naked with a man (Samer Bishara) who is not her husband, Yousef (Jalal Masarwa). The images are being used to blackmail Reem. Huda asks her client to inform Musa, her contact at the Secret Service, about weapons and political activities.

Reem is devastated by what has happened to her and cannot tell Yousef, as she will be seen as a traitor and bring shame upon her family. However, the resistance, led by Hassan (Ali Suliman) captures Huda and interrogates her. Meanwhile, his men try to find Reem.

"Huda's Salon" uses this plot to articulate ideas about the oppression of Palestinian women in Israel. But it also addresses themes of guilt, betrayal, and sacrifice. The film is full of knotty moral conflicts as Reem and Huda are both seen as victims faced with difficult decisions.

Abu-Assad, who explored similar topics in his Oscar-nominated films, "Paradise Now" and "Omar," chatted with Salon about his new film.

How did you learn about this story and what decisions did you make in how you told it?

I read an article 20 years ago. Surprisingly, this is still happening. Three weeks ago, there was another article about the same topic — using hair salons to recruit girls for the Secret Service.

My wife wanted to write something about Palestinian women, and she asked me if I knew dramatic stories about women in Palestine, and I told her the story of the salons. She wanted to know, "What's the story? It's just an idea." The next day, I said, "You should do this and this and this," And this is how it became a film! It was by accident. If my wife had not asked me about it, I wouldn't have made it!

You establish Huda and Reem as women who are trapped by circumstance. One of the reasons Huda gives for drugging the women she does is because they had terrible husbands. I appreciated her feminist streak. Can you talk about representing these women who face so much oppression?

This is the main issue. The Secret Service could recruit these women because they have terrible husbands. They can't recruit every woman. If it happened to my wife, she would come to me, and I would be supportive. But some of our society would consider this a shame, which is why some women are vulnerable to blackmail.

The Israeli oppression is obvious, I don't need to make a film about it. I want to make a film about how our society is oppressing itself. It is easy to be oppressed by Israel. In order to contribute positively to my society, I need to [show] the responsibility of Palestinian society, rather than provide an accusation of the occupation. I don't need to condemn the occupation in a movie. I need to criticize us to support these women in the future, so they are less vulnerable to being blackmailed.

It's part of our culture. Most women will have support from their family. There are about 20% who don't, and they are crucial. If one woman is recruited for the Secret Service, she can do more damage than you think, so it's important to open the discussion of these women being oppressed by their own husbands. They are not the majority, but the damage they can do is huge.

One character in the film says, "Society needs a wake-up call." Is this film in particular, and your films in general, meant to foment change and call attention to these very harmful situations? One could argue that you are a political filmmaker, but I see your films as being more personal stories that happen to be set in a political backdrop.

We are living now under extreme circumstances, but I am sure we will be free like everybody else. There is no oppression forever. With revolution and resistance, injustice will comply. This is, historically, always the case. I make personal films because we are always more interested in the personal than the actual. All great movies are about personal journeys rather than about the time and place. They can be both, but if it is not a personal story it will be outdated. I want to make films that stand the test of time, because they are the films that I like the most: "Citizen Kane," "The Godfather," and "One Flew Over the Cuckoo's Nest." They are 50, 60, 70 years ago, and they still resonate now. I want the same level of personal honesty.

I found Hassan's speech about an episode from his childhood very revealing. However, I also wondered if it was even true. He admits to lying about something he tells Huda during his interrogation, so I wondered if he was an unreliable narrator. Can you talk about the ambiguity in your film? I liked that I reconsidered what he said.

The theme of the film is ambiguity — between true and false, loyalty and betrayal. I believe that contradiction can't exist without [opposites]. If there is no evil, good means nothing. Good will be defined by its opposite. If there is no betrayal, loyalty has no meaning. I love these themes because they allow you to maneuver at the touchpoint between these contradictions.  That touchpoint, where they seem identical, is cinematically mind-blowing. You are entertained, but also forced to use your moral compass. This is why ambiguity is a major theme in all my films. I want to make people think rather than just feel. 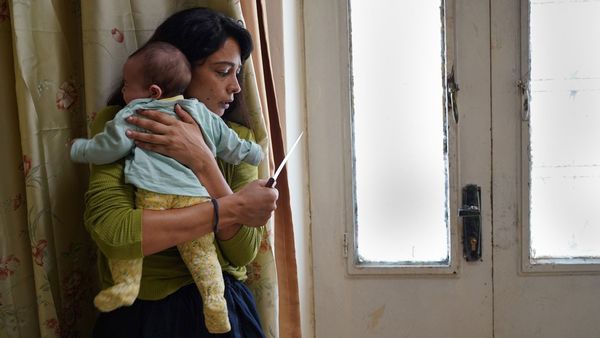 I love the line, "When bad things happen, people ask, 'Why me?' But they don't ask this when good things happen." The film plays with these kinds of dualities. Yousef teases Reem about seeing a boyfriend [she's not], but he also says, "I have a right to know everything you do." Can you talk about the paradoxes in your film? All the characters have these dualities.

All humans are in paradox. I believe that circumstances will force them to become who they are, but then they have free will. There is a never-ending struggle between the things you cannot choose and your desire to make your own decisions. Do we make our own choice, or do things happen by accident? And there is no bigger meaning? Even this movie was made by accident, if my wife hadn't asked me for stories. It was my choice. This is why I make jokes about it. When something good happens, I don't ask, "God, why me?"

Each character is confronted with a moral choice, and one of the decision points in the film is the question of if it is a question of your life or someone else's, what do you choose? What are your thoughts on this idea of sacrifice and self-preservation? This is a theme in many of your films, "Omar," and "Paradise Now."

My wife asked me this question when I gave her the script to read. "Do you realize all your films are about the same thing?" It's the traumatic experience of my life, the struggle between yourself and what you want and the greater good and the betrayal of that. She wondered, "You must have a big trauma from the past." I realized my biggest trauma is about a betrayal of trust. I don't want to go into detail about what happened, but two stories from my youth that defined my traumatic experience and probably my vision. I didn't consider that when I wrote "Huda's Salon."

The film is shot with a real urgency and immediacy. You use space very well, from Huda's salon to the underground lair and Reem's claustrophobic apartment. Can you talk about your visual approach to the story?

It was very simple. I wanted to do something different from what I did before. Usually I don't use handheld, but this time I thought I might. I also thought about duality in light — red and blue usually don't go together, but I tried to make a combination between blue and red in the scenes. The camera was handheld and one shot in every scene. Mostly that shows an objective point of view, but I tried to draw a subjective point of view and emphasize the duality of looking at the story. If you do one shot handheld, you feel like one of the characters is standing there because there is no escape from the time and the place. But this is objective. But I also wanted to make you feel you are the mirror of the character, or that you become the character. This is an experiment I did. I'm not sure I always succeeded, but I feel most of the shots are well-designed in this handheld, one-shot struggle between blue and red.

My last question also stems from something someone says in the film: "Tell me what lies inside you?" Maybe this gets back to your childhood trauma, but your films are very distinctive. I want to get a sense of who you are and what drives you to make the films you do?

When I was very, very young and I realized that my family and I are oppressed by occupation. My mother's sister fled to Syria, but my mother can't see her anymore. She wasn't allowed to go back. But if you are Jewish, you can come from Australia and live on the land of my family. There are also checkpoints, and in the night, the police can come to search for weapons. I remember as an 8-year-old, waking up with the light of police in my face to check under my mattress for weapons. You become very scared and feel something wrong. Why are we Palestinians treated differently? You see as a child, and as a teen, you live that injustice of the occupier daily.

When I was young, I couldn't stand injustice. My father had a company and when he treated his workers unjustly. I would stand with them, and not my father. When you see injustice as a child, you want to do something about it. I actually wanted to be a freedom fighter when I was 18. A wise man I met made me realize that violence would bring more violence, so I would do more to fight injustice by being morally superior if I studied. He convinced me to explore more non-violent resistance. My main motivation with cinema was to fight injustice through art. Cinema played a major role in my life as a child. My only escape from social and Israeli oppression as a child was through cinema. So, when I saw "One Flew Over the Cuckoo's Nest," I was so inspired, I wanted to be inspiring like that to others. I entered cinema to do something against injustice. This is me; this is who I am, and I am still doing that. The negative energy in me made me feel incompetent in changing the situation, but I can make beauty in art and a nice film. Art is able to change negativity to positivity. I can make something ugly into something beautiful to watch. Like Picasso with civil war. Civil war is very ugly, but his painting is beautiful to look at, at least emotionally. This is what I do. The frustration inside me, I am trying to express that in an art form. It's good that I didn't become a freedom fighter! [Laughs.]

"Huda's Salon" opens March 4 in theaters and available on VOD. Watch a trailer for it below, via YouTube.