For some, the embarrassment that stems from misreading social cues never ends 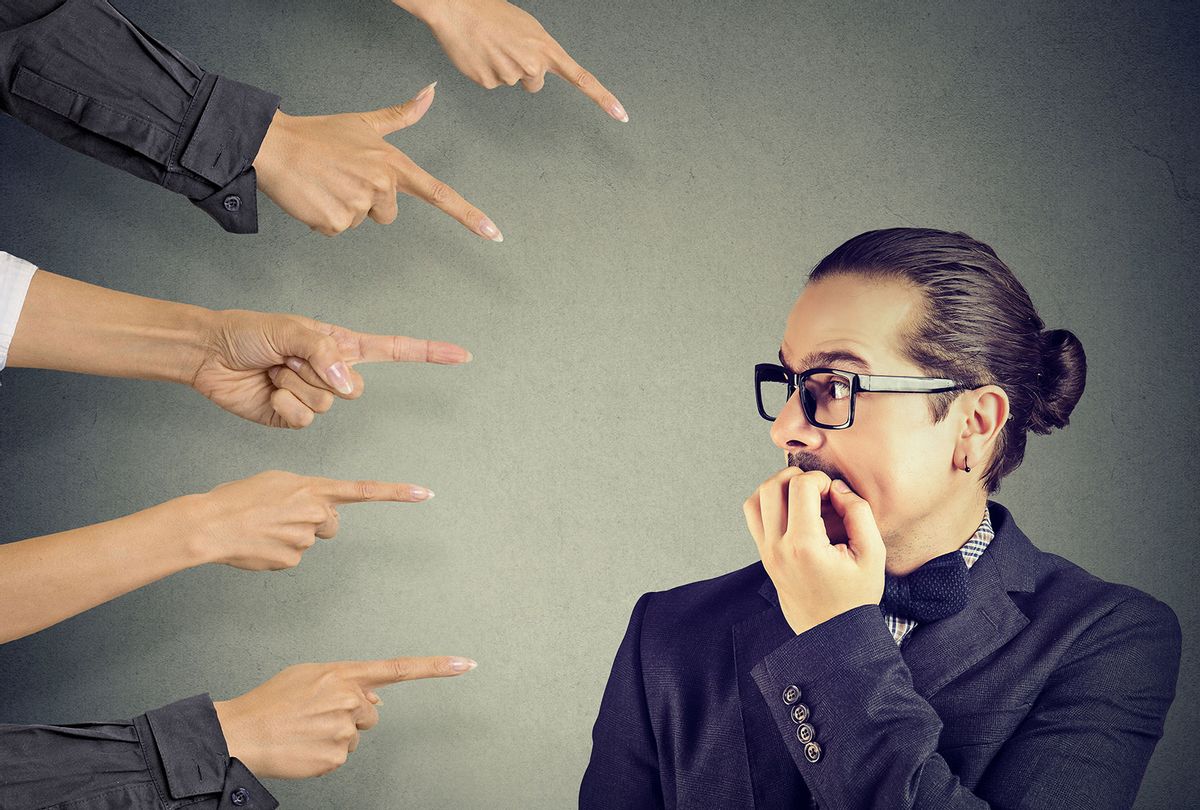 One of the trick-or-treaters had made too many jack-o'-lanterns. Each of her peers — the word "friends" would have been disingenuous — only carved what was needed for a silly game. Rhonda, misunderstanding and getting swept up in the artistry, carved multiple elaborate pumpkin sculptures. Overly-elaborate, in fact — and too numerous to count. She had mistaken a bit of juvenile fun for something more solemn, although she didn't realize this until her enthusiastic rambling about Halloween history was met with awkwardness.

At that moment, Rhonda's entire spirit seemed to retreat into itself. She suddenly saw with crystal clarity that she had screwed up. She had "outed" herself.

This is a minor scene from an obscure (and underrated) 2007 horror film called "Trick 'r' Treat." I mention it here because Rhonda, played brilliantly by Samm Todd, is heavily coded to be autistic. Like many autistic characters in pop culture, she is unusually intelligent and excruciatingly awkward. However, because the character is well-written and well performed, these traits feel authentic rather than stereotypical. This is especially the case during that moment when she realizes she has embarrassed herself by breaking unspoken social rules.

If you know how to look, you can see it. The pause. The wince, figurative or literal. The palpable sense of shame, followed by pathetic efforts at damage control. By the standards of the neurotypicals — that is, people who are neither autistic nor display other neurologically diverse behavior — you have failed, and whether it's their intention or not, they've let you know it.

I call that moment The Sting.

It doesn't just happen when you're autistic and talking about one of your obsessions, and it doesn't just happen to those who are neurodivergent. It happens when your need for structure and boundaries compels you to behave abnormally in public, and you feel as if you've become a spectacle. You experience The Sting when you're in a conversation and, forgetting to keep up with the rhythm of etiquette rules, get pegged as rude or abrasive or foolish. It strikes when you thought that people you cared about  or whose respect you needed had one impression of you, and then learned that instead they actually had a very different and negative one. The Sting occurs whenever you do something that made you different, outside of the group, and makes you fear that you will be defined by your perceived abnormality for the rest of your life.

That melange of horrible emotions, all rolled into one, is The Sting.

The Sting, by my definition, has three characteristics:

Autistic people like me have known The Sting for our entire lives. We have all been Rhonda in "Trick r' Treat," failing to properly function as a member of our social species because we speak a different neurological language and being ashamed for it. There needs to be a term for that specific type of shame.

"I have used the word 'sting' in my description of it before," Dr. Tasha Oswald, who works with autistic patients and is starting an eCourse and online community in Summer 2021 to help autistic people and their loves ones. "However, I think the word 'sting' does not capture the depth of pain and trauma experienced by autistic people. In my 17 years of working with autistic people, the sad reality is that they are chronically invalidated by others in their life. They are invalidated and told they are 'overly sensitive,' 'too emotional,' 'weird,' or 'shouldn't act that way.' Throughout life, their experience of the world (their reality) has often been questioned and criticized."

This does not merely create a hostile world for people who are not neurotypical — or, for that matter, those who are neurotypical but sometimes display these non-neurotypical behaviors — it is also traumatizing.

"What makes things worse is that they are often misinterpreted," Oswald added. "Others assume they are intentionally being a 'jerk,' 'rude,' 'selfish' or 'insensitive.' It's very painful for an autistic person when they have good intentions but are mischaracterized. To top it off, these misunderstandings often lead to grave consequences for an autistic person, like the loss of a friendship or being ghosted and not knowing why."

Frequently this mistreatment originates from the fact that many autistic individuals possess extensive, specialized knowledge, making them both intimidatingly intelligent and socially awkward. That in turn can cause them to struggle both socially and in the workplace — or flourish, particularly when a workplace is aware of how it can help autistic workers thrive.

Ultranauts, a software company, is renowned for having an astonishing 75 percent of its workforce on the autism spectrum. "There is an incredible talent pool of adults on the autistic spectrum that has been overlooked for all the wrong reasons," co-founder Rajesh Anandan, said in a BBC interview. Anandan says his company uses hiring practices and business practices that are adapted for those who are neurodivergent, and notes that such practices put his company at a competitive advantage.

Josias Reynoso, a young man on the autism spectrum who works at MOVIA Robotics, was frequently bullied and struggled to communicate with others as a child. He was diagnosed as autistic at the age of 11. Reynoso says that volunteering to mentor to children interested in STEM subjects at a local Boys & Girls Club helped him gain self-confidence, and he fell in love with teaching and mentoring children and teens.

Reynoso told Salon that he has some advice for neurotypicals to better understand people on the autism spectrum.

"Normies like the thought of accepting autistic people, but in practice, a shocking majority prefer to pull the trigger on judgment over establishing clarification," Reynoso explained. He used text messaging as an analogy.

"Imagine you are sending a text to a close friend congratulating them on having a new child," Reynoso posited. "You write 'Congratulations on the baby. I'm so happy for you.' with a smiling emoji at the end. Once your friend receives the text, they don't see a smiling emoji. Some incompatibility between software replaced the smiling emoji with an eye-rolling emoji. There could undoubtedly be some form of conflict between you and maybe even some damage to a relationship over a simple misinterpretation."

"This," he said, "is closely analogous to the experience of an autistic individual."

Wendy Gardner, a podcaster and a Skincare Alchemist at Glow Skincare, has Asperger's Syndrome. Gardner says she often feels blowback from people who didn't understand neurodiversity.

"I worked for an entertainment/ticketing company in London in the IT department back in the day when smartphones didn't yet exist," Gardner recalled. This was in the era when laptops needed to stay plugged in, Facebook was brand new and Blackberry phones were all the rage.

"One day all IT staff were unexpectedly given Blackberry phones," Gardner said. "I was stunned and blurted out something like 'Oh no, now we're going to have to work longer now, ha ha.' My boss didn't think that was funny." Gardner's attempt to be funny by stating the obvious backfired, while her neurotypical colleagues gave the "appropriate" expressions of gratitude and enthusiasm. She later paid a price for her gaffe.

"When redundancies came round, I was the one picked," Gardner explained. "I found the afterwork drinks too exhausting so went to as few as possible and only stayed an hour or two, not four or five. I had an hour commute so preferred to head home to get started unwinding from the stress of work. I took my work seriously. However, had I been a chatty, boozy [neurotypical] who could sling the approved comments instantly, I suspect another colleague would have been made redundant. I was the sitting duck, so to speak."

Temple Grandin, an autism community advocate and animal behavioral specialist, told Salon over email that she is well experienced with The Sting.

"There are two problems I still have when I am following back and forth social conversations in groups with three or four people," Grandin explained. "I often interrupt because I am not able to follow the rhythm to time my turn to talk. Another problem is often social conversations are too rapid for me to process them. My best relationships are with people where there is a shared special interest." That is why, as a teenager, she says she developed friendships with peers who shared her passions for riding horses, working with model rockets and building electronics.

Grandin's passions ultimately became her solution: As she told Salon, "To help me adapt to not fitting in well in purely social situations I directed my focus to my career. Having meaningful work provides purpose in my life."

I doubt there are many (or any) autistic people who don't have lots of stories about feeling The Sting. My most mortifying moment occurred in 2018, as I interviewed a former Israeli prime minister about his new book. As an ice-breaker, I thought it would be funny to thank the Israeli government for giving me a "free vacation," referencing the Birthright Israel trips available to many Jewish youths throughout the world. (I had availed myself of mine years earlier when I was a recent college graduate.) He immediately told me that he was taken aback by my remarks, treating them as an insulting and disrespectful breach of etiquette. It hit me: He takes this seriously! I immediately felt awful, since I had not intended to hurt anyone or disrespect my Jewish heritage. Nevertheless I had broken a rule of etiquette. In a moment I had gone from collected professional to sputtering social clumsiness. Commence The Sting.

I write this article for no other purpose than to draw attention to the fact that The Sting exists, and that it needs to have a name. Every so often our vocabulary is not entirely adequate to the needs of a group, and I believe this is one of those situations. People who are neurodiverse need a way to describe a key aspect of our experiences. Language legitimizes, and a term takes a complicated idea and makes it easier to understand — and harder to deny.