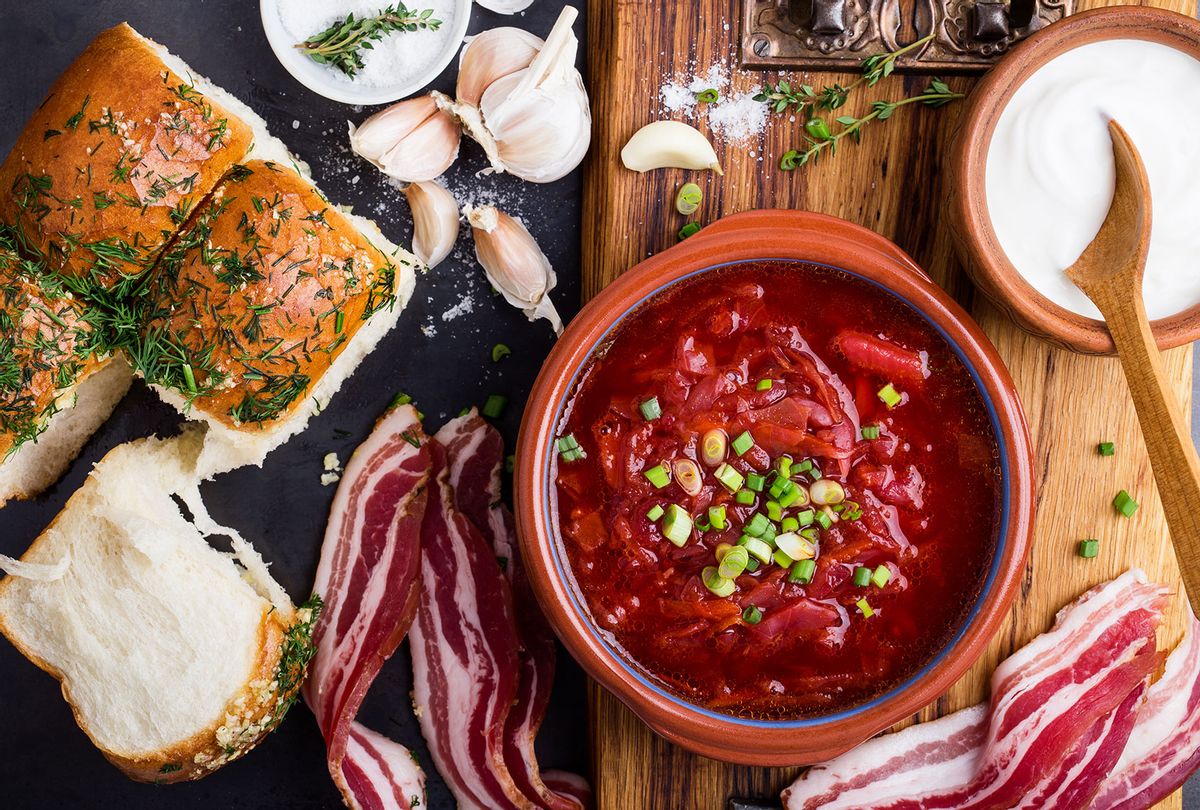 Participants are encouraged to cook and bake items for sale — specifically, in many cases, Ukrainian and Eastern European-inspired dishes — and donate the profits. On the collective's fundraising page, a mission statement reads, "#CookForUkraine aims to increase awareness of the humanitarian crisis the world faces right now, as well as raise the funds needed to aid children and families in Ukraine who have been displaced by the current situation."

The statement adds that hundreds of people from across the world — including home cooks, restaurant owners and top chefs — have joined the initiative. Together, they're turning their love of food into a global movement.

RELATED: Surging prices and wheat shortages: How the invasion of Ukraine is impacting global food supplies

In addition to hosting bakes sales and supper clubs, participants have made the suggested recipes — including Ukrainian challah, solyanka, layered cabbage pie and green borscht — simply to share on social media and spread awareness of the campaign, which has raised almost $140,000.

This isn't the only food-based effort that has developed in support of Ukraine in recent weeks, which seems fitting for the country known as the "world's breadbasket." Ukraine, after all, is one of world's largest grain producers.

Washington-based chef Paola Velez has also launched #BakeforUkraine, an offshoot of her popular #BakersAgainstRacism fundraisers that kicked off in 2020.

Bakers Against Racism started with a small pop-up called Doña Dona, which sold Latin-American-inspired doughnuts. The proceeds benefited undocumented workers in the nation's capitol amid the pandemic. After the murder of George Floyd, chef Willa Pelini reached out to Velez about hosting a similar pop-up with the proceeds benefitting Black Lives Matter.

Velez realized, though, they would need to do something bigger.

"Using the resources she learned during Doña Dona, Velez typed up a mission statement and several detailed documents about how to bake at scale and raise funds, brought on Chef Rob Rubba as the creative mind behind the graphics and as a co-founder of the movement," the Bakers for Racism homepage says. "She created a website, a hashtag and an Instagram."

Home cooks and professional bakers from across the country sprung into action — and into their kitchens — and Bakers Against Racism has gone on to unofficially become the world's largest bake sale, raising more than $2.5 million for social justice causes.

Now, the Bakers Against Racism community have mobilized once again. Their hashtag has been used more than 1,000 times on Instagram, flooding social media feeds with gorgeous images of blue and yellow cakes, sunflower-shaped cookies and traditional desserts like Ukrainian apple cakes and raspberry tarts.

Supporters of Ukraine also took to the internet in a different way, briefly leveraging food reviews as a way to spread accurate information about the conflict in the country. As Mashable reported, on Feb. 28, Twitter user @Konrad03249040 tweeted, "Get involved: find a random shop/cafe/restaurant in Russia in big city on google maps and write in the review what's really happening in Ukraine. Please spread the idea."

The Twitter user tagged an account that belongs to the "hacktivist" group Anonymous, who re-tweeted the message to its nearly 300,000 followers. The idea began to gain traction, especially after being shared to the r/Ukraine subreddit. Soon, posts urging Russian readers to seek out accurate information about the armed conflict began to appear on restaurant review sites, such as Google Reviews and Yelp.

One translated review that was shared on Twitter read, "The food was great! Unfortunately, Putin spoiled our appetites by invading Ukraine. Stand up to your dictator, stop killing innocent people! Your government is lying to you. Get up! google "Kyiv" and putler [sic] and share it with all people in Russia."

Mashable posted an update to the story on March 2 after a Google spokesperson shared the following statement: "Due to a recent increase in contributed content on Google Maps related to the war in Ukraine, we've put additional protections in place to monitor and prevent content that violates our policies for Maps, including temporarily blocking new reviews, photos, and videos in the region."