Yes, they're venomous, and yes, they fall from the sky like paratroopers. But experts say they're nothing to fear 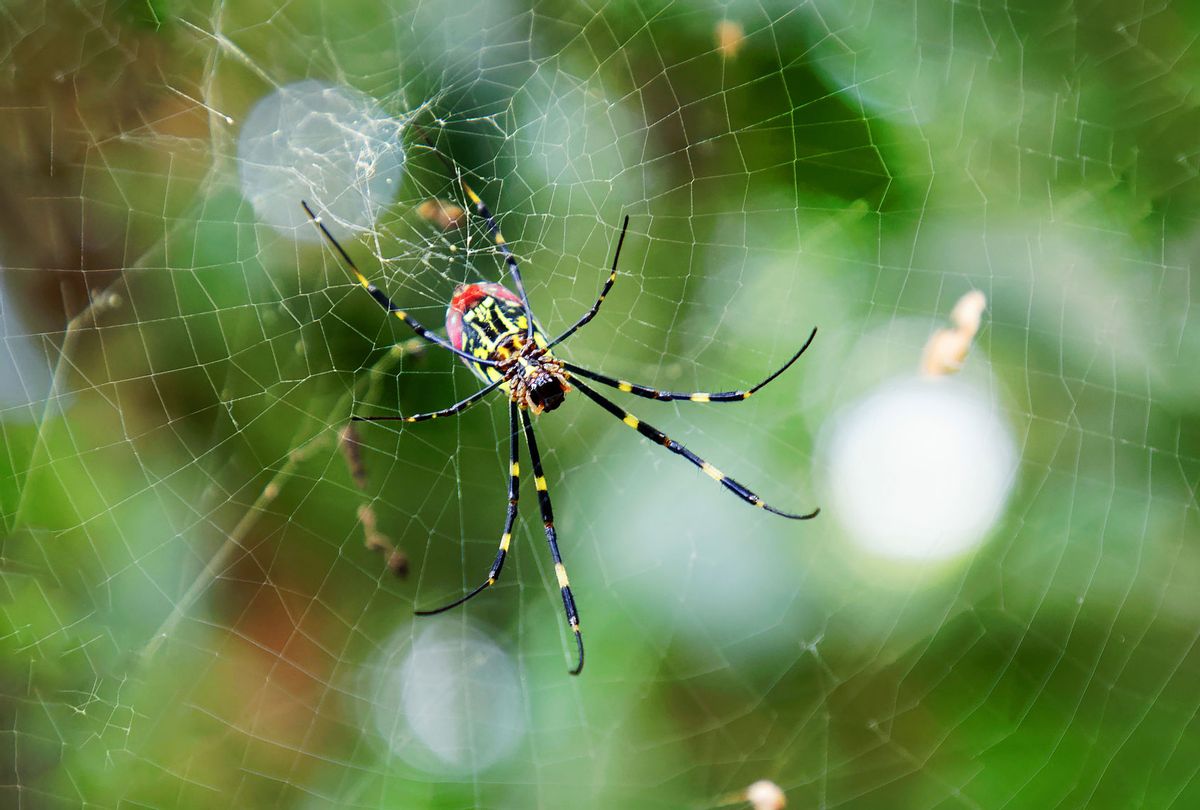 Closeup of the red, yellow and black spider Trichonephila clavata in the spiderweb, also known as Joro spider, member of the golden orb-web spiders (Getty Images/HasseChr)
--

They're venomous, they're as big the palm of your hand, and they're spreading fast in the United States.

They are called Jorō spiders, and they're the latest invasive species to hit American shores. Granted, the Jorō spider is indeed an impressive, even frightening specimen: they have a striped exoskeleton that takes on a number of hues — bright yellows, pitch blacks, softer grays, with blue patches on their spindly legs — and their webs, in the sunlight, can appear like shimmering gold because of the thread coloring. They are indigenous to southeast Asian countries like Japan and Taiwan, but through unknown means have entered the southeastern United States as an invasive species.

You might think that, like fellow invasive species spotted lanternfly, a brightly-colored bug from another continent should be feared and destroyed. That's certainly what the headlines are implying, at least; one typical example, from Axios, reads "Giant spiders expected to drop from sky across the East Coast this spring," which conjures up visions of paratrooper arachnids. USA Today actually used the verb "invade" in their headline describing the situation.

Yet scientists and science journalists agree that these new spiders are not merely harmless, they are fascinating — and shouldn't be feared, nor immediately smushed.

"Everyone calm down about the spiders — Axios is doing a bunch of bulls**t scare-mongering for clicks," freelance science journalist Erin Biba tweeted.

Dr. Benjamin Frick, coauthor of a study of the Jorō spider species published in the journal Physiological Entomology, told CNN that because the spiders are neither dangerous to humans nor damaging to the environment, it would not be right to harm them.

"In light of this, people should not embark on spider genocide — all this would achieve is the needless killing of a beautiful animal," Frick explained.

Dr. Andy Davis, a research scientist in the Odum School of Ecology and the other coauthor of the study, told NPR that "people should try to learn to live with them." Although they kill their prey with venomous spider bits, Davis pointed out that Jorō spiders' fangs are rarely sharp enough to pierce the skin of humans or their pets. Indeed, the spiders might actually provide an alternate food source to local predators like birds.

"If they're literally in your way, I can see taking a web down and moving them to the side, but they're just going to be back next year," Davis explained.

In the study co-authored by Frick and Davis, the two scientists described how the spiders have been in the southeastern United States for nearly a decade, where they have survived due to the hospitable climate. They assessed whether the spider would remain confined to that region or could spread to colder areas of the United States. They found that the spider can complete its entire life cycle in a narrow period of time, has a high metabolism, has a high rate when exposed to colder weather and in general can better withstand cold weather. This makes it entirely plausible that they could make a home for itself in the northeastern United States.

At the same time, the most common reported issue with these spiders is that their webs are so large, and three-dimensional to boot, that it is easy to accidentally walk into them. This makes them a nuisance, but little more.

RELATED: Scientists say spider silk could teach us how to replace plastic

"The webs are a real mess," Dr. Will Hudson, an entomologist at the University of Georgia, told NBC News last year when describing his predicament of having the spiders take residence on his front porch. He has had to kill 300 of them just to keep his property tidy. "Nobody wants to come out of the door in the morning, walk down the steps and get a face full of spider web," he said.

Like dandelions, the Jorō spider appears to fall under the category of "nice" invasive species, that do not seem to muck up the existing ecosystem too much. This is in contrast to the aforementioned spotted lanternfly, which has been making headlines as an example of the kind of insect that truly does pose a threat to humans. By consuming vital crops like grapes and Christmas trees, spotted lanternflies have hurt local industries.

"It has killed grapevines, which of course has direct negative economic impacts for growers," Dr. Julie Urban, an associate research professor of entomology at Penn State University, told Salon last year. "However, it also has caused growers to increase the number of insecticide applications they make to try to control [spotted lanternfly] (which still is not sufficient to allow them to overcome the damage caused by waves of [spotted lanternfly] coming into vineyards, particularly in mid-September), and more insecticide sprays cost more money."

For more Salon articles on arachnids and insects: