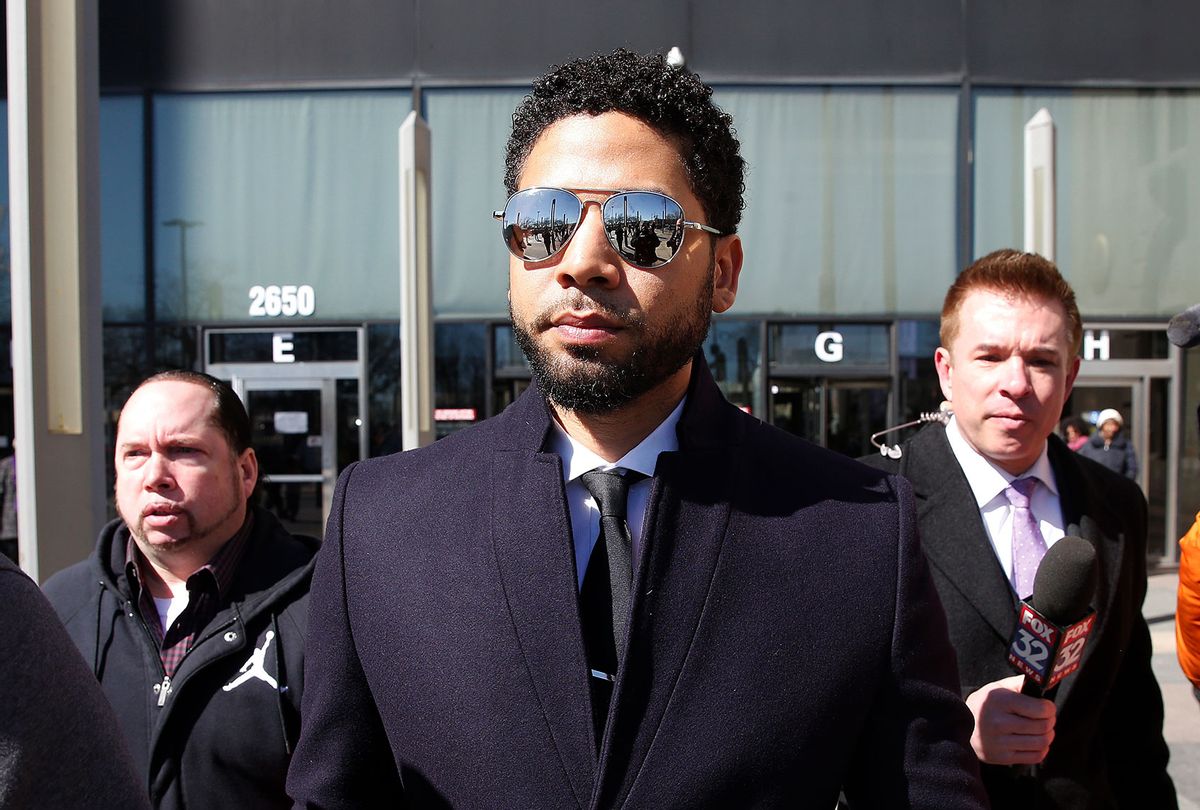 Actor Jussie Smollett leaves the Leighton Courthouse after his court appearance on March 26, 2019 in Chicago, Illinois. This morning in court it was announced that all charges were dropped against the actor. (Nuccio DiNuzzo/Getty Images)
--

On Thursday evening a Chicago court sentenced "Empire" actor Jussie Smollett to 30 months felony probation with the first 150 days to be spent in jail, starting immediately. In addition he received a $25,000 fine and an order to pay restitution to the city of Chicago in the amount of $120,106. Upon hearing his sentence Smollett made an emotional statement to the judge saying he's "not suicidal," and that if anything happens to him in jail, it's not because of anything he did to himself.

During the sentencing trial Judge James Linn heard statements from a variety of people in Smollett's life including his grandmother, 92-year-old Molly Smollett, who said "I ask you, judge, not to send him to prison ... "If you do, send me along with him, OK?"

In December 2021 a jury in Cook County, Illinois found Smollett guilty of five out of six charges of felony disorderly conduct for making allegedly fabricated police reports claiming he'd been the victim of a racist and homophobic hate crime. Smollett had claimed that two men attacked him in Chicago late one night in January 2019 calling him racial slurs while placing a noose around his neck and then pouring bleach on him. In 2021 it was ruled that this event was likely orchestrated by Smollett himself.

In March 2019 Smollett was initially indicted on 16 counts of felony disorderly conduct but Cook County State's Attorney Kim Foxx's office dropped all charges a few weeks later stating the actor was no danger to the community, had already done community service, and would forfeit his $10,000 bond, according to CNN. Rumors of special treatment began to circulate after this, leading to the case being taken to a second grand jury, which went on to indict Smollett on six felony charges in February 2020.

This was all put into motion when Chicago police tracked down two brothers, Abimbola and Olabinjo Osundairo, and gathered evidence and testimony leading them to believe that Smollett had paid them $3,500 to stage the attack on the night of January 29, 2019 with the instructions to not to hit him "too hard." Smollett had met the men while working together on "Empire," according to AP News who also reported that Chicago Police Superintendent Eddie Johnson claimed "Smollett staged the attack because he was unhappy with his salary and wanted publicity."

Throughout the preceding trial, Smollett has maintained his innocence.

Update: On Wednesday, March 16 an Illinois appeals court ordered Smollett's release pending an appeal, according to The Hill. The actor, who was also made to pay $150,000 bond, has made statements via his lawyers expressing that he's felt physical danger since his brief time in Cook County jail.