The traditions of the Netflix pagans, some of them bloody, are still strangely comforting 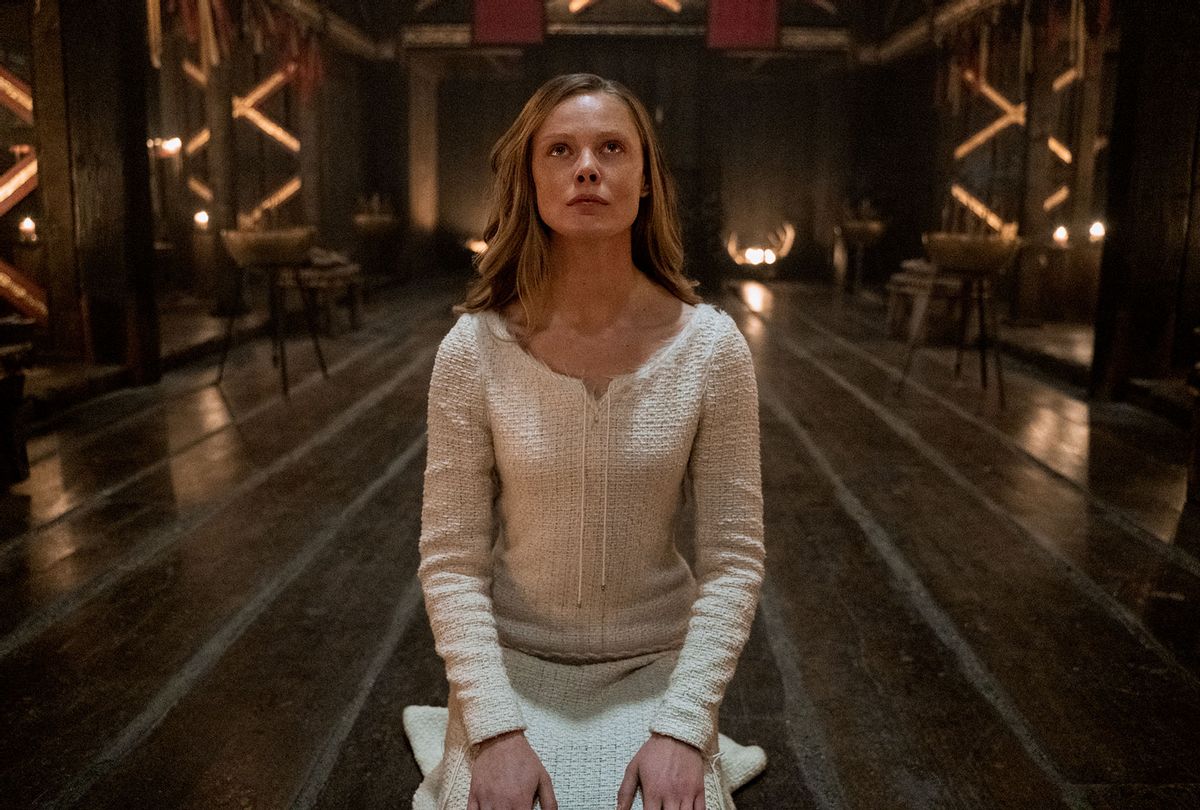 It's one of the minor but no less essential aspects of living that the pandemic robbed from us: Doing things the way they had been done. Routines are important for feeling OK, both in day-to-day life and special occasions. I missed Saturdays, when my child and I would walk to a local bakery and get the salmon bagel (he would mostly eat the bagel, I would mostly eat the salmon) as much as I felt the absence of party invitations, weddings and events. I missed and still miss having an excuse to dress up. Or, to dress.

That's part of the attraction of "Vikings: Valhalla," Netflix's new show set in the universe of legendary Vikings—not only the warriors' heroic exploits but their ways of worshipping and, even simpler, just their ways.

Watching traditions play out on screen, from the big (human sacrifice) to the small (important jewelry) is oddly comforting, even if some of those actions are more invented than actual fact. It's still compelling to witness a character get to do what they've always done, continue to do what matters to them. While Netflix is likely banking on violence and drama to be the big draw here, the routines and ceremonies of the Vikings, though smaller and certainly quieter, are mesmerizing.

In other words: Come for the bloody battles. Stay for the rituals.

Related: "Vikings": Our dark age, as seen on History

"Vikings: Valhalla" is a sequel to the popular, 6-season series "Vikings" which aired on History. That story followed the rise of Viking Ragnar Lodbrok from farmer to king, fictionalizing the exploits of a real figure from history. Emphasis on fiction.

Like its predecessor, "Vikings: Valhalla" takes a pick-and-choose from history approach. Some of the stories in the show happened, but not in the way they play out onscreen. And some of the characters were based on actual people, but not people who were living at the same time as each other. As David M. Perry, author of "The Bright Ages: A New History of Medieval Europe," writes in Smithsonian: "now that it's no longer airing on the History Channel, it's less likely to lead folks astray."

"Vikings: Valhalla" fast-forwards a hundred years into sort of history. Anyone looking for a direct sequel to Lodbrok's exploits will be disappointed. But anyone who can't remember exactly what happened in "Vikings" (raises hand) will find a compelling cast of new faces, including Leif Erikson (Sam Corlett)—yes, that one but not that one—and his sister, Freydís Eiríksdóttir (Frida Gustavsson).

Smartly, the show centers on a group of Vikings from Greenland, including Leif and Freydís, who have traveled a great, tumultuous distance by boat, hellbent on a noble mission of revenge. Strangers in a strange land, they are teased by other Vikings when they finally arrive in the great port city of Kattegat, mocked for their rustic ways and their cool fur coats (Leif killed a polar bear for his coat, OK?).

They have also brought their rituals with them, especially Freydís.

The central conflict of "Vikings: Valhalla" is between Vikings who have converted to Christianity and those who have remained pagans. Nowhere is this turmoil more apparent than in the character of Freydís who, wouldn't you know it, falls in love with a Christian Viking. Meanwhile, her mind and body literally bear the scars of another Christian Viking, one who hurt her deeply and one she has traveled across the ocean to bring to justice.

Freydís is quietly, resolutely faithful (and Gustavsson is mesmerizing). Her commitment to rituals and to the old ways fuels the show, and her storyline feels the most urgent. When we first see her, she's on the bow of her people's small boat, buffeted by rain but still screaming for them to pull. When the waves get rough, she lashes herself to the mast. Her choker necklace of polished bone glows in the darkness.

Visually, she's a stark, wild contrast to the "civilized" Vikings the Greenlanders will meet in the city. This is a pagan for the ages.

Freydís later gives a different necklace she wears to the man she loves, to protect him, like a knightly favor. When he survives battle, he in turn gives it back to her before a trial she must undergo. Small tokens take on big significance in the show, as they do in the lives of spiritual characters like Freydís. She burns items in offering: branches, effigies.

Unlike some of the Christian Vikings, Freydís is not showy in her faith. She just calmly and privately does the rituals that sustain her (and, she believes, will keep her brother and other warriors safe).

But her devotion to her faith consistently puts her in danger. She burns an offering in sight of amassing troops. "This is no longer a land safe for believers in the old ways," the leader of Kattegat, Jarl Estrid Haakon (Caroline Henderson) tells her. And when she attracts the attention of murderous, Christian zealot Jarl Kåre (Asbjørn Krogh Nissen) in a storyline reminiscent of Apple TV+'s "See," all Vikings are in danger, not just the pagan ones.

Part of the attraction of the rituals in this show is how fraught they are. Freydís won't give up her faith, not for a man and not for a murderer. But part of it is the newness of it all. Except for the original "Vikings," I'm not sure I've seen human sacrifice onscreen the way it's presented in "Vikings: Valhalla." Like a day that ends in y. Inevitable, a part of existence. To have life in this world, you must also have death—and sometimes, volunteer for it.

The drama of the rituals hinges on our not totally understanding. Realizing the depths of her faith, Freydís is sent by Estrid on a pilgrimage to Uppsala, a holy place for the pagans. When she attracts the eye of a priestess there, and next appears with her hair cut and wearing a white shift, the thought rose in me: Is Freydís going to be sacrificed?

She's only having a vision. Yet when Estrid asks for a volunteer to take a message before a giant battle, that man is ceremoniously put to death. I really just thought he was going to take a note.

Rituals are colorful and evocative in "Vikings: Valhalla." Uppsala is gorgeous, set high on a hill in the woods with bright, fluttering flags on the path. You don't have to be a Viking pagan to be impressed by the temple with its soaring ceilings, to be quieted by the wise-looking statues of gods like Odin.

The dress, face paint and branch crown of the priestess is intimidating—but not so much the way people journey to a site special to them, and how happy they are to be there together.

And a big part of the attraction of the rituals is familiarity too. The idea of community, belonging, and yes, doing things the way people have always done them. While some of the rituals, like a lot of the storylines, might be invented in "Vikings: Valhalla," that doesn't make them any less compelling.