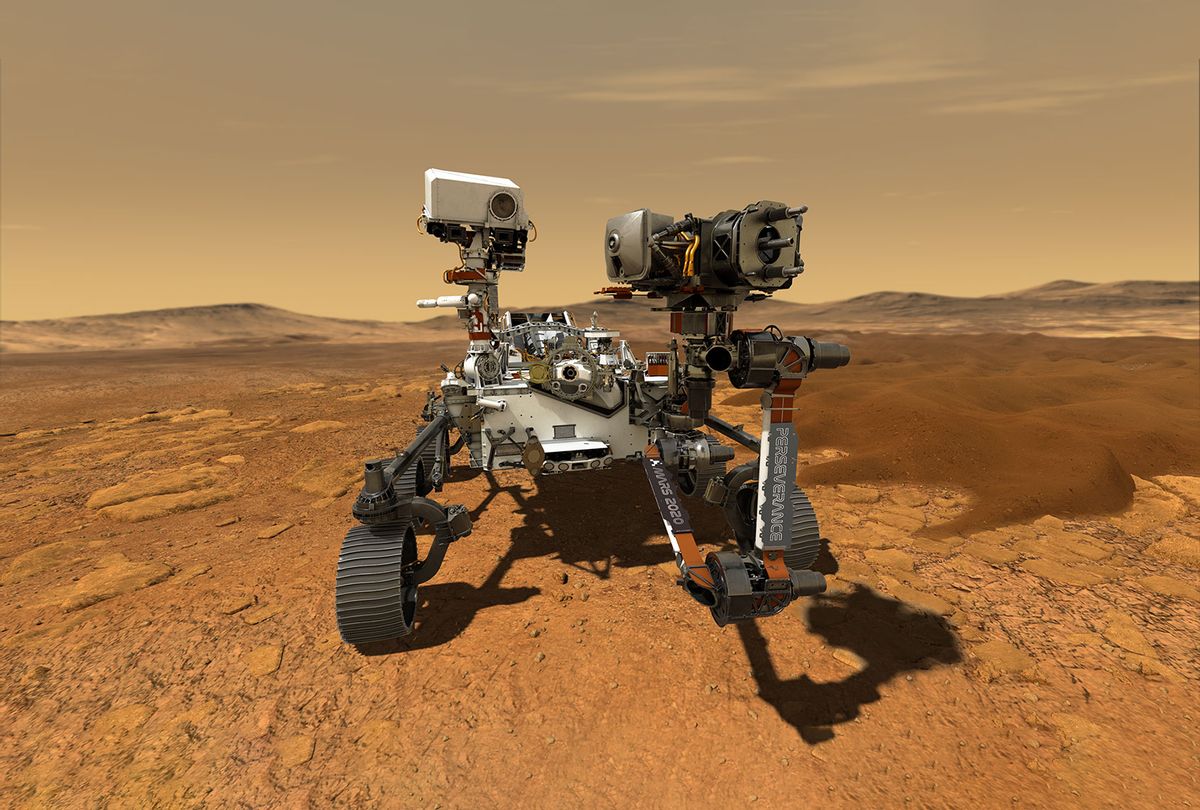 This illustration depicts NASA's Perseverance rover operating on the surface of Mars. Perseverance will land at the Red Planet's Jezero Crater (NASA/JPL-Caltech)
--

It's been 13 months since Perseverance landed on Mars, marking the beginning of a new chapter of exploration on the Red Planet. Since then, the Mini Cooper-sized rover has made history over and over, again racking up an impressive list of firsts. To wit: Perseverance was the first mission to successfully fly a helicopter on another planet. Perseverance managed to extract oxygen from the Red Planet's carbon dioxide atmosphere, which could eventually be a way to provide astronauts with oxygen on Mars. And perhaps most importantly, the rover successfully collected and stored soil and rock samples that will ultimately become the first Martian rocks to return to Earth for scientific study.

Sample mission return missions are rare in space exploration, because of the expense of two-way space travel. That makes Perseverance's sample-return mission particularly exciting, as humanity has never directly extracted rock samples from Mars and brought them back to Earth.

Unfortunately, us Earthlings are going to have to wait a little longer for this sample return mission to happen, as announced by NASA on Tuesday. However, NASA has a pretty good reason.

Previously, scientists were planning for the sample-return mission to commence in 2026 and be in the hands of (Earth) scientists by 2031. But now, due to the need for the development of a second lander, the mission team says they need more time.

"Detailed analysis of SRL [sample-return lander] landed mass requirements has led NASA to adopt a dual-lander architecture, with the second lander carrying the European-provided fetch rover," NASA officials explained in a document detailing their requests for the White House's 2023 federal budget, and explaining why they want two landers. "The development of a second lander necessitates a move to a 2028 launch date and 2033 sample return date and is consistent with the Mars Sample Return Independent Review Board's (IRB) finding that a dual-lander architecture may improve the probability of mission success."

The change comes after an independent review board went over NASA's initial plans for the sample-return mission, which will be the first time a rover embarks on a round-trip mission to another planet.

Though the sample return aspect of the mission has been pushed back, that doesn't mean Perseverance isn't currently doing exciting science. Currently, the rover is on a three-mile journey to one of the most exciting destinations in its mission: a river delta on the rim of Jezero Crater, a place that scientists believe may have once been home to microbial life. Its study of the soil around the Jezero Crater could yield definitive proof of life on Mars.

"The delta is so important that we've actually decided to minimize science activities and focus on driving to get there more quickly," said Perseverance's project scientist, Ken Farley, in a NASA press release. "We'll be taking lots of images of the delta during that drive. The closer we get, the more impressive those images will be."

Scientists believe this location is one of the best on Mars to look for past signs of life. Upon arrival, Perseverance will use the drill on the end of its robotic arm and collect rock cores for its sample-return mission. From Earth, scientists will begin to search images for the rocks they'll eventually want to look at in closer detail, albeit it will be a few years before they're able to get their hands on them. Perseverance is expected to arrive at the delta by mid April.

The ancient river has peculiar topography. As a fan-shaped delta, the crater floor is nearly 130 feet below the surface. The delta is full of angled surfaces, projecting boulders, and sand-filled pockets. In other words, it's somewhat dangerous and precarious terrain for a rover that doesn't have access to a repair yard. However, given the diversity in terrain, scientists are hopeful that it holds geologic revelations that could show proof of past microbial life that perhaps existed billions of years ago on Mars.

Luckily, Perseverance has a buddy on its journey, as scientists recently extended Ingenuity's helicopter mission. The small drone copter flits around Mars as an aerial complement to the rover's ground-based observatory.

"Less than a year ago we didn't even know if powered, controlled flight of an aircraft at Mars was possible," said Thomas Zurbuchen, the associate administrator of NASA's Science Mission Directorate. "Now, we are looking forward to Ingenuity's involvement in Perseverance's second science campaign. Such a transformation of mindset in such a short period is simply amazing, and one of the most historic in the annals of air and space exploration."

Once Perseverance arrives at the delta, Ingenuity will scout out two dry river channels and determine which one Perseverance should head for when it's time to climb to the top of the delta. Ingenuity will also assist with identifying potential science targets — and it may even scout landing zones for the landers part of the sample-return mission.