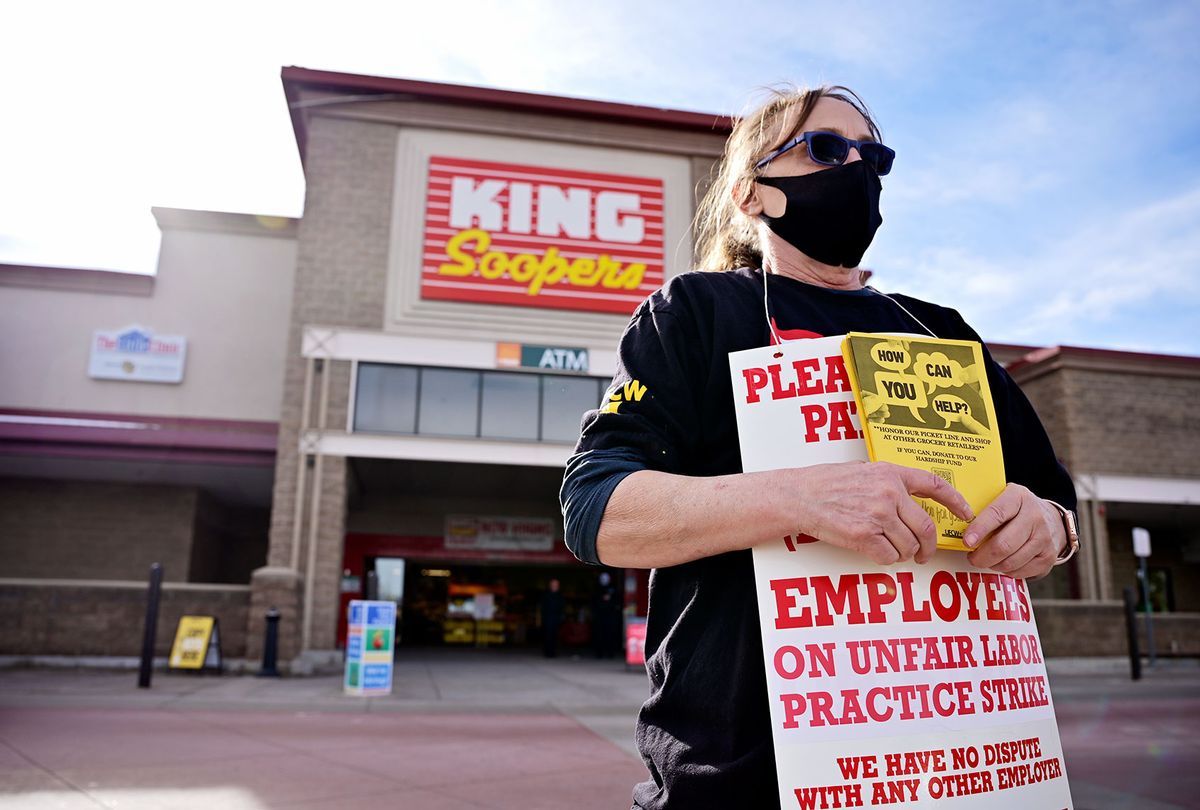 Suzy Vidger and members of United Food and Commercial Workers Local 7 ask support to the customers during the strike against King Soopers in front of the supermarket in Village Center in Highlands Ranch, Colorado on Wednesday, January 12, 2022. (Hyoung Chang/MediaNews Group/The Denver Post via Getty Images)
--

In a move aligned with the recent efforts of Starbucks and King Soopers employees to demand better working conditions, roughly 47,000 California grocery store workers have voted for their union to authorize a strike if current negotiations for a better contract are not successful.

This week, talks between union leaders and representatives from the Kroger Family of Companies — which owns chains including Ralphs, King Soopers, Albertsons, Vons and Pavilions — will continue after months of deliberation, and the pressure to keep business as usual is on.

Related: We aren't only facing a supply chain issue — for grocery workers, it's also a labor rights issue

As CBS News reported, "The union said…that the companies' wage proposal amounted to a 60-cent increase that was "shockingly low" and well below workers' cost-of-living needs. Employees were asking for a $5-an-hour raise, among other proposals."

Bargaining originally began in January, and has continued on since then without a result. The previous contract expired earlier this month, on March 6th, without an agreement.

The thousands of workers represented today are employed at stores like Ralphs, Albertsons, Vons, and Pavillions, situated in the central and southern regions of the golden state. The United Food and Commercial Workers International Union has several locals represented among the employees, which could mean a huge labor shortage for the various roles in each store. The walk-out could include pharmacists and grocery clerks, as well as deli and bakery workers, and any other specialized roles that customers depend on.

This isn't the first time that these workers have had to threaten withholding their labor. In 2019, employees from these exact four grocery stores voted to authorize a strike, but an agreement was met before it was necessary.

As Salon reported in February, employees at King Soopers, which is also owned by Kroger, also opted to strike for increased wages and employee safety measures.