The joy of "Abbott Elementary" is its lesson about fulfilling work

More than a terrific comedy about schoolteachers, this ABC comedy speaks to what we're all needing right now 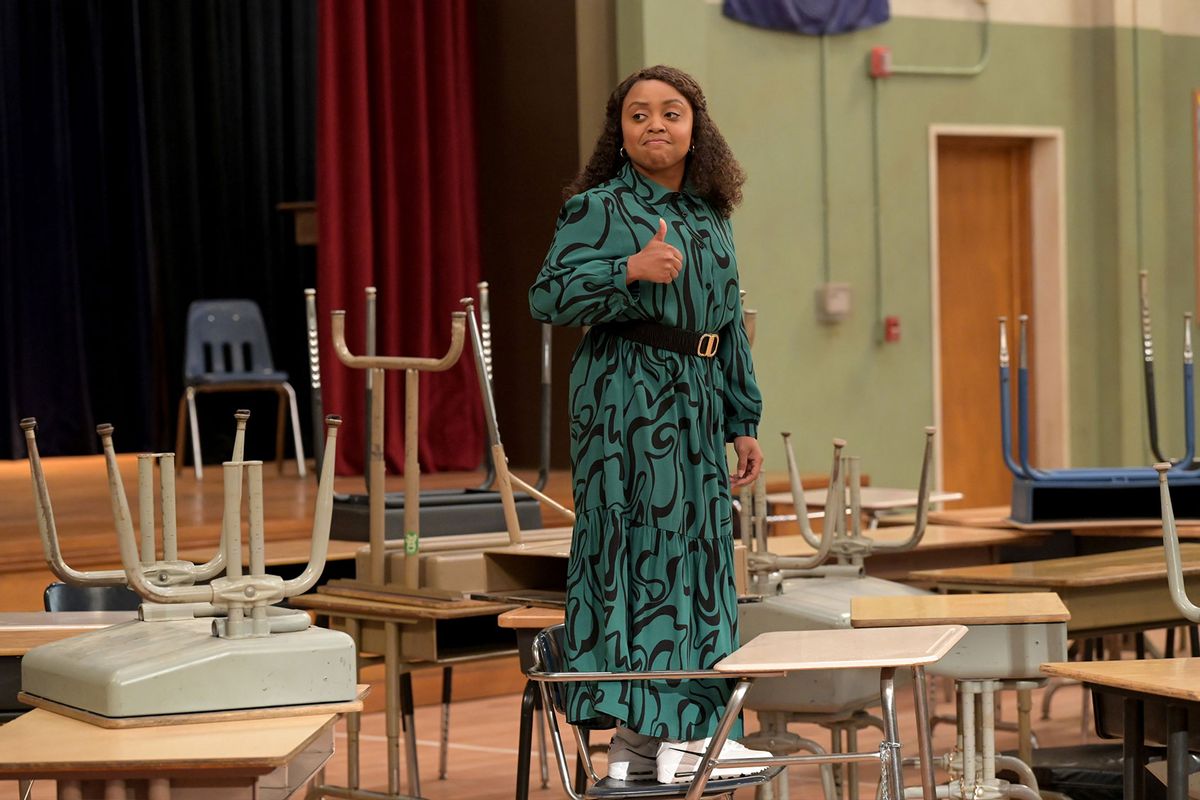 The "Abbott Elementary" season finale finds its endlessly optimistic second grade teacher Janine Teagues (Quinta Brunson) floating high in the sky during a class field trip to the zoo. This is not a metaphor – she loses track of a kid, finds him in the basket of the zoo's hot air balloon and before she knows it, the severe acrophobe is floating far above the ground, as terrified as her student.

Then again, maybe it is kind a metaphor. The finale, titled "Zoo Balloon," finds Janine touching down at a fork in the road. She could follow her useless boyfriend to New York, where she would have to continue supporting him. Or stay in Philadelphia and keep plugging away at a job she loves, continuing to teach second grade at the criminally underfunded Willard R. Abbott Elementary School.

By her own definition, she's already making it.

Classically ambitious professionals might see this choice as a no-brainer. New York's the place everyone wants to be. Like the song says, "If you can make it there . . ."

Janine is exactly the kind of go-getter who could land a better-paying job in that city . . . but why? By her own definition, she's already making it, improving life for her young pupils alongside veteran teachers like Melissa Schemmenti (Lisa Ann Walter) and Barbara Howard (Sheryl Lee Ralph). Janine's can-do attitude and tragic wardrobe works their nerves. She also inspires them. And when Janine returns to Earth, she steps out of her fear and moves beyond the person she was, dumping her dumbbell of a childhood sweetheart and choosing to stick with teaching.

RELATED: "Abbott Elementary" finds laughter in the challenge of teaching in underfunded schools

If you were to compile a list of the last six years' defining sentiments, you'd be obligated to include anxiety, anger and hopelessness. Each is an invisible psychological wedge driving people apart, but also toward TV comfort food, mainly comedies.

But we'd been turning to sitcoms for solace years before the phrase COVID-19 was even thought of. Among the most popular is  "The Office," Netflix's most-watched show in 2018 according to a widely covered Wall Street Journal report, viewed in far greater numbers than it was when it aired on NBC. (The sitcom moved to Peacock in 2021.)

Overtly that show has little in common with "Abbott Elementary" beyond their shared status as workplace mockumentaries.

But Brunson's ABC comedy speaks to 2022 in ways that classic, adored as it is by Gen Z and Billie Eilish, can't quite touch. "The Office" is a fantasy about work and a best-case scenario workplace family, while "Abbott Elementary" uplifts the value of choosing meaning and satisfaction in a profession, even one as financially thankless as teaching.

Aside from the ways that purpose and meaning can be exploited to increase product output and profit, meaning and satisfaction are worthless concepts to most corporations.

And as more people are rejecting the notion that this is the way work has to be, the career and life philosophy "Abbott Elementary" espouses feels comfortable and right. This isn't to say that  these teachers somehow have it easier than the average TV cubicle drone – quite the opposite.  Office politics still play prominently, with many episodes revolving around Janine and her fellow junior educators Jacob Hill (Chris Perfetti) and Gregory Eddie (Tyler James Williams) navigating bureaucratic and interpersonal absurdity to get supplies for their classrooms or make sure their students receive the best education they can provide.

They have to scrounge for every tool and treat they can lay their hands on, all while putting up with their kids' patience-dissolving antics. But their students also motivate them to spend their own money to buy books for them, or hoodwink privileged locals to get what their classrooms need. The young actors playing Abbott's pupils aren't catchphrase-generators, either. They play realistic kids with individual versions of intelligence, and they consistently remind the audience why their teachers refuse to give up on them or shuffle them through their days without ensuring that they're actually learning.

Witnessing the school's gradual improvement as the freshman season of "Abbott Elementary" progresses is one of the warmest joys the show offers. The other more central delights are found in the small victories teachers find by helping each other to overcome whatever obstacles are placed in the way of progress, usually by their massively unqualified boss Ava Coleman (Janelle James). But even she is only living up the low expectations of a local government that refuses to fund public education. 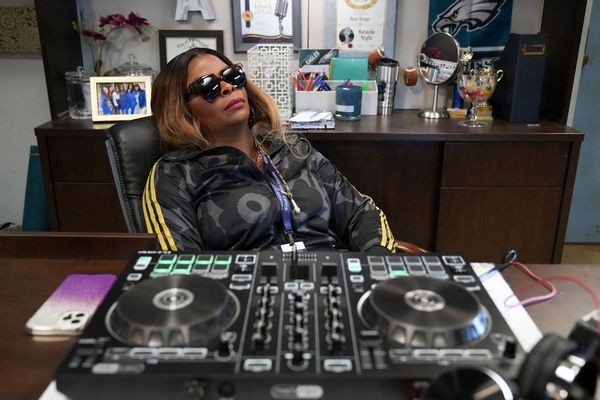 Abbott Elementary (ABC/Scott Everett White)Against these odds, test scores improve along with the overall mood at Abbott because the teachers have each other's backs. So does Ava, on occasion, although she most consistently behaves like a caricature of nightmare managers most office workers would recognize.

We may still fall back to Michael Scott as the prototypical management clown, in that he's obsessed with being liked and fostering a family vibe at a workplace that looks like the hell where fun is sent to die. But Ava's priority is keeping her job, not necessarily improving her performance, wringing as much as she can out of her position while she has it. And the wonderful James, a stand-up comedian gifted with crisp timing and flawless delivery, made Ava a breakout without overpowering her co-stars.

Despite all this, even Ava demonstrates her worth from time to time because, again, it's about the kids. She may have misappropriated the school's limited funding to buy ludicrous items like chrome rims for the wheels on their school buses, but her obsession with celebrities, TikTok and Instagram also makes her better at leading the school's step team than Janine.

Ava eventually wins even Gregory's respect, although he obviously still has his eye on her job, which was his main reason for coming to Abbott in the first place. But his was a career climber's point of view – he, more than anyone else in the show, has wrestled with the meaning of work. Near the end of the season his father calls him to belittle his choice to pursue such a low-paying, low-reward career as teaching, hence his quest to win a principal's position.

But he chooses to join Abbott as a full-time staffer, largely after realizing how much satisfaction he gets from teaching children something new and the small victories born out of understanding who they are and how they learn. He's still as uptight as he was at the beginning of the season, but he's also more open to being more childlike.

In TV-related social media conversations, "Severance" has dominated most longform discussion about what TV has to say about the modern American workplace. This isn't unwarranted, mind you – the Apple TV+ show is a multilayered dive into the empty promise of the work-life balance and the industrial disregard for a worker's well-being, along with being one of the most aesthetically impeccable shows of the year.

But "Abbott Elementary" earned its place in conversations about shows people need to be watching, or simply need, mainly due to its consistently hilarious writing and plausible, lovable characters. It is truly one of the best sitcoms TV has offered in 2022, and without a doubt one of the year's best shows. Much more than this, it validates what many millions of people have figured out during this society-wide shifting view of how we work and what we value about it, especially as it relates to the rest of our lives. When working parents also became part-time teachers, it dawned on many people how challenging our teachers' day-to-day jobs are. This show celebrates our educators' dedication to shaping the future not with earnestness, but joy, cleverness and humor that often leaves the viewer breathless.

For the rest of us, it validates the view that some of the toughest careers are worth undertaking as long as the higher reward is a greater purpose shared by likeminded, caring people. A larger paycheck would be nice, of course, and Abbott Elementary's teachers deserve that, too. Until that happens, they made the most of what they do have, including their satisfaction at doing the best by their kids. There's a lesson that for everybody, regardless of one's professional ambitions.

The first season of "Abbott Elementary" is available to stream on Hulu.