"Ozark" is back to close out its final season

Salon recaps the first two episodes of the second half of Season 4, saying goodbye to the Byrdes for good 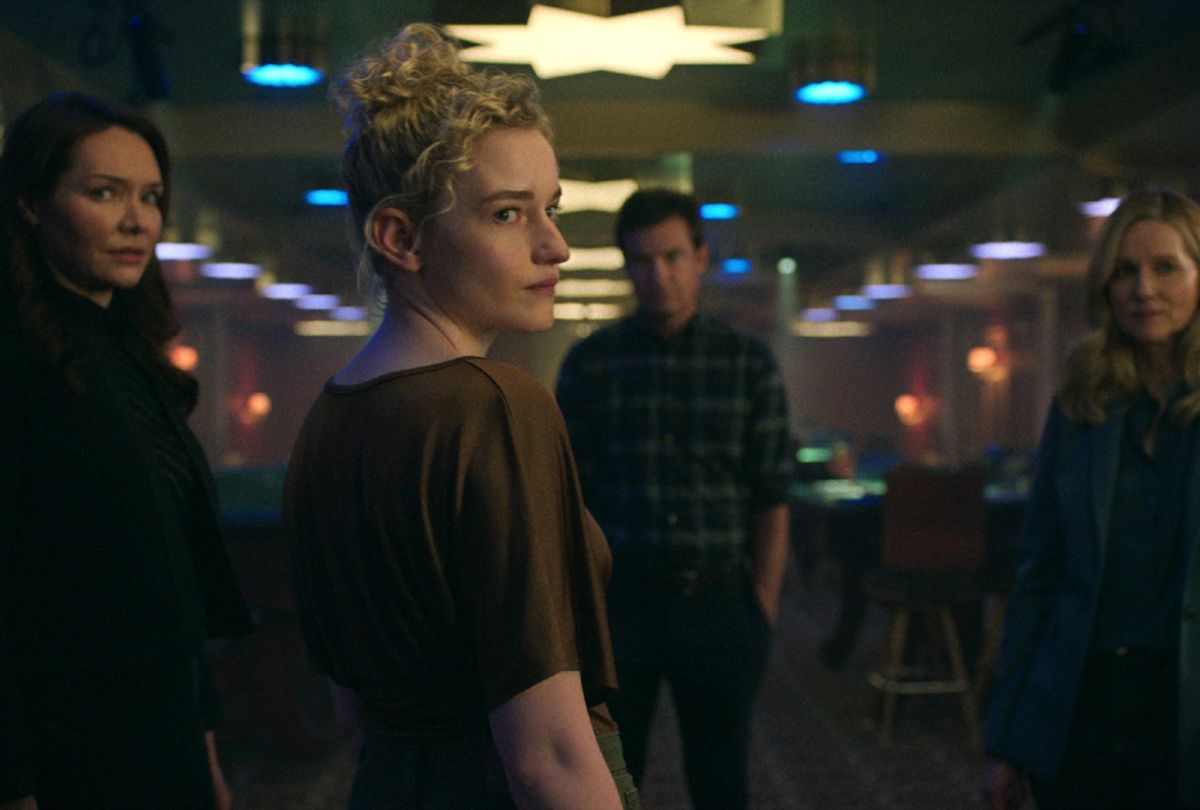 After a midseason break in January the Netflix crime drama "Ozark" is back to finish its fourth and final season with seven episodes to close out what has been a darker than expected series.

Since the show first debuted in 2017 we've been gripping the edges of our seats to see what will become of Marty Byrde (Jason Bateman), his wife Wendy Byrde (Laura Linney), and their kids Charlotte (Sofia Hublitz) and Jonah (Skylar Gaertner) as they dig themselves deeper and deeper into what started out as a Hail Mary money laundering scheme and has now placed them as public enemy No. 1 in the eyes of local law enforcement, the FBI, and various higher-ups within the Mexican drug cartel.

There's no option for a return to "normal" here when normal was never in the cards for this family from the jump.

On shifty footing from the very beginning when he relocated his family from Chicago to Missouri to operate a number of businesses all in an effort to launder money for his often crabby cartel associates, Marty now finds himself facing possible death at every turn as more and more of his safety net goes up in flames. There's no option for a return to "normal" here when normal was never in the cards for this family from the jump.

The rest of the Byrde family is in equal near-constant danger, especially Wendy, who has devolved into the selfish sort of two-faced villain many viewers of the show, myself included, no longer find value in rooting for. These last few episodes come pre-loaded with a warning air of "shocking death," and there's no way everyone from the Byrde family is walking away from this alive. Maybe none of them will make it. But if only one character has to be sacrificed to the gods of event television, my vote's for Wendy.

RELATED: "Inventing Anna" takes a good story, imprisons it in unnecessary excess and robs of us our time

Greed has turned into murder, time and time again as a result of Marty's financial dealings, and the family he strives to protect has the tendency to turn on each other when their own individual interests are threatened. When Wendy's brother Ben (Tom Pelphrey) talks a bit too much about the Byrde family's drug ties he winds up dead. And although Wendy didn't pull the trigger herself, she saw it coming and did nothing to stop it. This event led to a major rift between her and her son, Jonah, which they've yet to recover from, but Wendy doesn't seem all that upset about it provided Jonah doesn't also get in her way, lest he wind up dead as well. I certainly wouldn't put it past her.

Problems within the Byrde family have a way of seeping elsewhere, becoming the problems of other families to an often bloody end.

Problems within the Byrde family have a way of seeping elsewhere, becoming the problems of other families to an often bloody end. When Wyatt Langmore (Charlie Tahan) gets killed for having become wrapped up in the love life of heroin distributor Darlene Snell (Lisa Emery), his cousin, and heralded scene-stealer of "Ozark," Ruth Langmore (Julia Garner) sets out to avenge his death, which catches us up to part two of season four, titled in my mind as the "You're gonna have to f**kin kill me" season.

Ruth is, and always has been, the heart of "Ozark," and watching her drive to Chicago daydreaming about joyful times spent with Wyatt since they were little is a sharp and needed contrast to the much darker goings-on of the Byrdes. Ruth is loud and rough around the edges and bases her decisions on instinct and loyalty. While the Byrde family is quiet, reserved, and from the sort of privilege that breeds normalcy in your actions and your emotions working separately for so long that they often separate all together.

"You don't know the first thing about being f**king rich," Ruth says to Wyatt in a flashback. Although they are also interested in money, and would definitely do just about anything to have more of it, that doesn't steer them into disloyalty and other similar dirty dealings in the way it does the Byrdes, which makes for a superior, although far more difficult way of living. Ruth is on the right side of justice here, no matter how many people she kills.

Ruth doesn't know what Javi, her cousin's killer, looks like, but she begs that information from Charlotte and Jonah, as well as where she can find him. The next day Ruth drives to Shaw Medical in Chicago where Javi will be meeting with Marty, Wendy, and Clare Shaw (Katrina Lenk) but chickens out on her first opportunity to shoot. Marty spots her driving away from the building and keeps calling until she eventually picks up. He makes his best effort to talk her out of killing Javi, but telling her that Javi dying will mess up their business deal only fuels her flame more. She forces Clare and the Byrdes to lure Javi back to the building and this time she kills him on first sight.

With Javi dead, every bit of security, financial and literal, that the Byrdes had accumulated for themselves goes up in smoke. Their only remaining option is to leverage Javi's uncle, Omar Navarro (Felix Solis) to get whatever protection they can get from the FBI in exchange for manipulating Navarro however they're able. But manipulating someone as powerful and dangerous as that guy is a risky move, and one that we'll see the consequences of play out in the remaining episodes.

Towards the end of the second episode of Season 4's back half (technically this season's Episode 9) we get a harsh example of the kind of betrayal Wendy is capable of. While Ruth is attending the funeral of her cousin, which Marty organized in an effort to save face, Wendy is back home packing up go-bags to save her own ass and abandon her family. While, on one hand, they'd honestly be better off without her, this just says so much about the kind of woman she is.

Before Wendy can make it out the door two of Navarro's guys come in to the house, scaring her to death, but she puts on a calm mask of negotiation as her defenses kick in.

One of the men, Father Benitez (Bruno Bichir), Navarro's priest, gives a creepy monologue about Wendy needing to repent in order to be saved, to which she replies that she can save herself.

"You can try," Benitez says, chillingly.

With the latest of many attempts to sell out her family thwarted, Wendy has no other option but to nuzzle up to Marty again, circling the wagons to come up with a new plan for saving their lives and, if it's convenient, the lives of their children. But for every minute they spend occupied, Ruth is gobbling up allies and resources that once belonged to them. If all goes well, she'll see it through till the credits roll on the final episode of the series. But it's still anyone's game at this point. Well, aside from all the people who were already made casualties of all this mess.