Move over, Benedict. In Season 3, Colin and Penelope will get their time to shine first, and that's a good thing 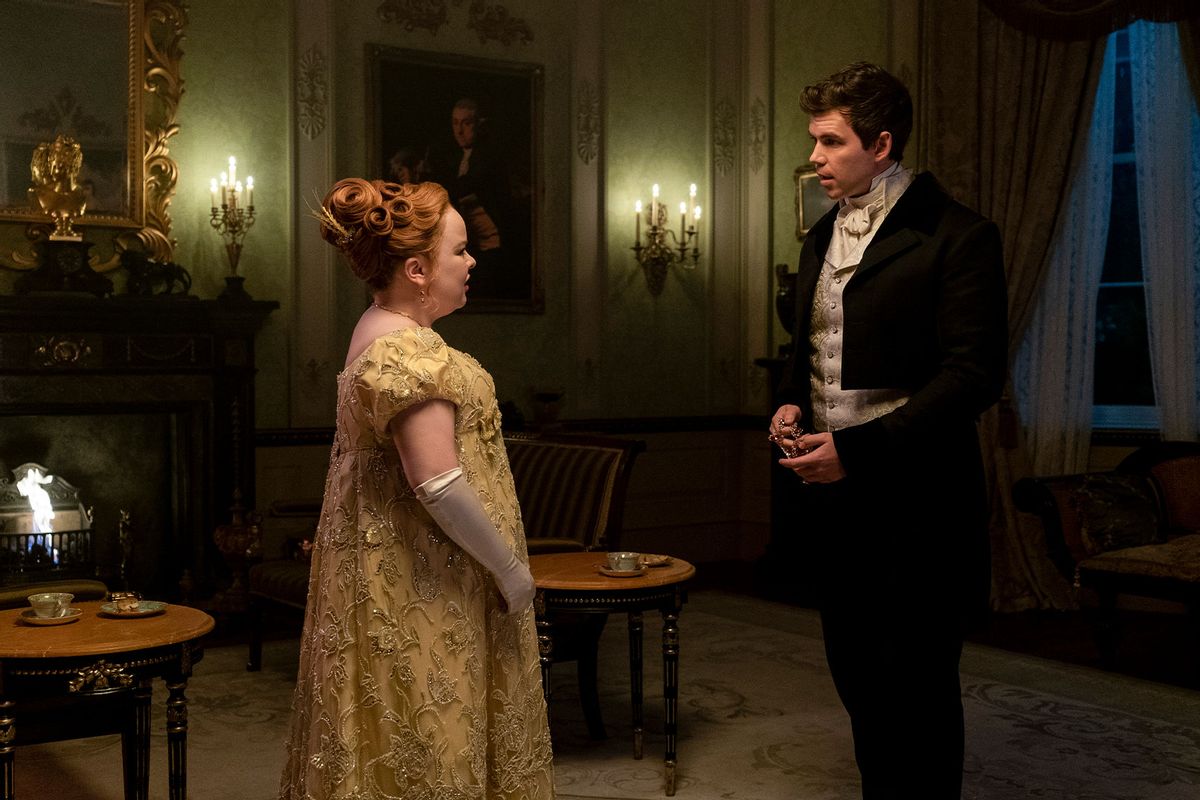 Fans of the acclaimed Netflix period drama "Bridgerton" were thrown for a loop after it was announced that the show's third season wouldn't follow the order set out by the book series.

According to Variety, the news was revealed by Nicola Coughlan who plays Penelope Featherington during Sunday's FYSEE panel. "Bridgerton," which is based on Julia Quinn's novel series of the same name, has so far followed the same progression as the books — the first season focused on Daphne (Phoebe Dynevor) and Simon's (Regé-Jean Page) story, followed the first book, "The Duke & I" while the next season, which focused on Kate (Simone Ashley) and Anthony's (Jonathan Bailey) story, as set out by the second book, "The Viscount Who Loved Me."

It was assumed that Season 3 would follow the author's third book, "An Offer from a Gentleman," about the romance between second-eldest Bridgerton heir Benedict (Luke Thompson) and his love interest Sophie Beckett, but Coughlan revealed that Netflix would save Benedict's tale for later. Instead, the spotlight will be on Penelope and Colin Bridgerton's (Luke Newton) burgeoning love story, which is detailed in Quinn's fourth book, "Romancing Mister Bridgerton." At this time, Benedict's season has not been confirmed, but it will most likely be pushed for a later date, perhaps after Penelope's showcase. The sudden change in focus came as a surprise to many and quickly riled up fans on social media.

On Monday, Jess Brownell, the new "Bridgerton" showrunner replacing Chris Van Dusen, explained how the timing works for Colin and Penelope's relationship to come next.

RELATED: 5 ways to fix "Bridgerton" next season to transform this guilty pleasure into guilt-free escapism

"I really feel like it's Colin and Penelope's time. Because we've been watching both of these actors on our screens since Season 1, we've already invested in them a little bit. We know who they are as people," she told Variety. "I feel like, especially in the last season, there are these moments of tension between them where it's like, Colin walks up to the line of almost realizing that Penelope has feelings for him but doesn't quite get there. Instead of treading water on that dynamic, we wanted to push it into their season. It really felt like the perfect moment to tee it up."

Frankly, fans of Quinn's books shouldn't have been too surprised at the sped-up timeline for this couple for several reasons.

There's only so much Lady Whistledown subterfuge that can be played out onscreen before it starts to feel repetitive.

One of the first major changes Netflix's series made was to unmask Penelope Featherington's secret identity as anonymous gossip columnist Lady Whistledown for viewers at the end of the first season. Whereas, in the novels, the reader – and the ton – doesn't learn of Penelope's double life until she finally gets together with Colin by the end of her novel, which marks the halfway point of the book series.

That meant that Penelope was suddenly in the foreground for Season 2, which led to more creative opportunities for conflict. She struggled to print her gossip sheet while simultaneously trying to hide her identity from both the Queen (Golda Rosheuvel) and her best friend, Eloise Bridgerton (Claudia Jessie), who is also Colin's younger sister.

Penelope had to make some difficult decisions to throw the vengeful Queen off the scent of Eloise, whom she suspected of being Lady Whistledown. The inelegant solution? Penelope floated a nasty rumor about the Bridgertons in the scandal sheet, which clearly Eloise would not do if she were the mysterious author – but in the process it hurt the clan's reputation. There's only so much Lady Whistledown subterfuge that can be played out onscreen before it starts to feel repetitive, so to move from this to Penelope's love life in Season 3 makes sense to change up the conflict.

The fallout from the Bridgerton rumor, however, is that it lights an intense hatred of Lady Whistledown in Colin Bridgerton's heart. How's that for an obstacle in the rocky road to love for him and Penelope? His prejudice against the gossipmonger will naturally be played out next season, and it's smart to then have him discover that his nemesis, Lady Whistledown, is one and the same as the woman he is destined to love. Can you imagine if "Bridgerton" stayed faithful to the books' order and tried to stretch that hatred out for another season?

It's smart to then have Colin discover that his nemesis, Lady Whistledown, is one and the same as the woman he is destined to love.

And it's clear that the show has been intending the Colin and Penelope storyline to come next anyway. Season 2 teased more "Polin" moments, especially after the pair had their first dance together. Although the moment is both tender and intimate, it's later revealed that Colin is not romantically interested in Penelope, which she overhears him telling his friends. It's a very "Pride & Prejudice" Mr. Darcy evesdropping moment, which can't make Penelope happy. Colin, who has already been rejected by Marina Thompson (Ruby Barker), can't stop "friend zoning" the one person who cares about him the most.

Getting them together earlier also means that the Lady Whistledown storyline can either be shelved or at least changed. Perhaps Colin will help Penelope in her endeavors or they can leave that behind them and just travel the world.

The problem with Benedict

Lastly, Benedict's own storyline still remains unclear at this point, including his sexuality, with many fans theorizing that he's queer and/or gay. To be clear, Van Dusen denied that reading of the character, and we've only seen Benedict trysting with women in the first two seasons. But LGBTQ representation hopes spring eternal. How about making Benedict bi? Already the series has delved far deeper into his artistic side, which could point to making him far more openminded than his peers.

According to the books, Benedict is destined to fall in love with Sophie — a Regency-era Cinderella who is mistreated by her stepmother and stepsisters and forced to work as a servant — after their first meeting at a masquerade ball. With "Bridgerton" being far more cognizant of how modern viewers see social issues, the class commentary inherent in a Cinderella-style story will need time to be finessed.

Not only that, but the show will need to cast a wide net to find someone to play Sophie if she's going to live up to the screen presence of previous Bridgerton love interests: the scene-stealing Duke (Regé-Jean Page) in the first season and fiery Kate Sharma (Simone Ashley) in the second. It's wise to hold on Benedict and give more time for his character — and possible love interest(s) — to grow.

In contrast, Colin and Penelope are already part of the core cast, and therefore filming can begin immediately (or as soon as scripts are approved). And while we're on the subject of people who have already been cast, Eloise's love interest in the books has already been introduced on the show as well. With her anger at sussing out Penelope's lies at the end of Season 2, we woudn't be surprised if that fuels Eloise to become disillusioned and soon leave London, which would move her story up also.