The sketch says about the domestic violence: "I'm glad it ain't me." But for millions of women, it is them 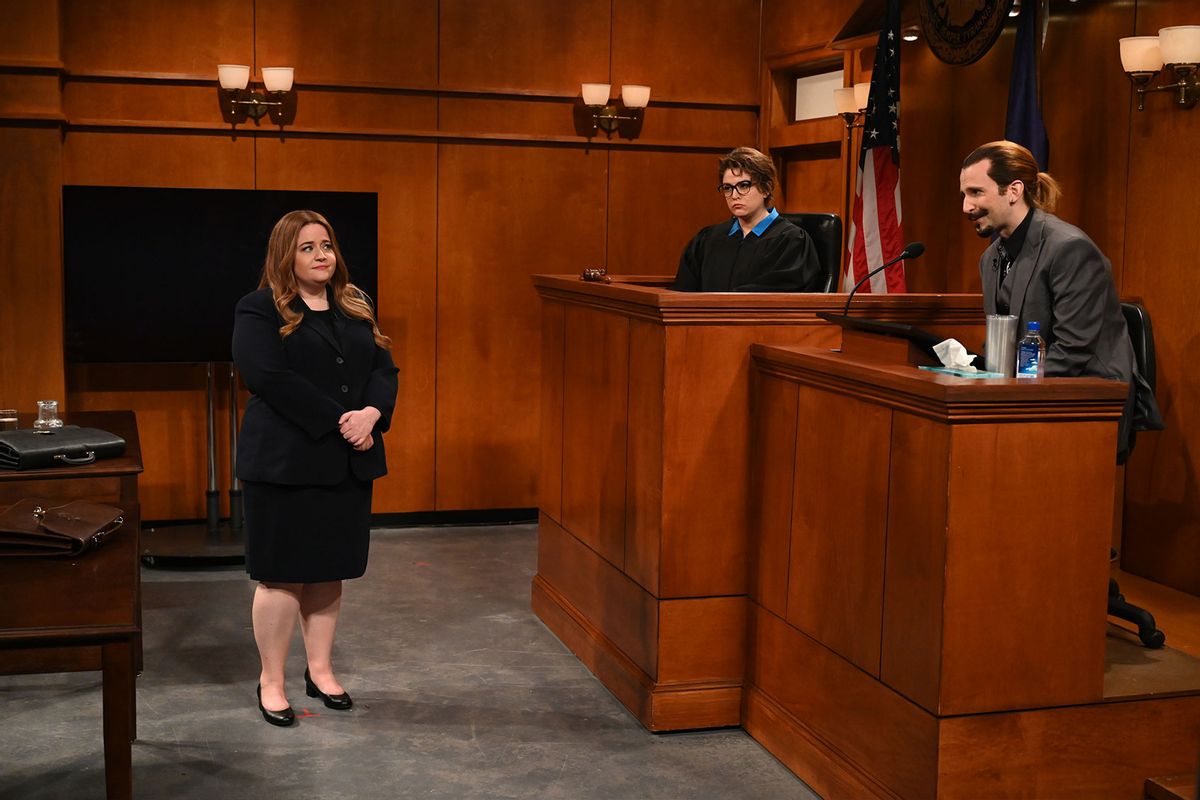 Aidy Bryant, Cecily Strong, and Kyle Mooney as Johnny Depp on "Saturday Night Live" on Saturday, May 14, 2022 (Will Heath/NBC)
--

In the cold open of the Saturday, May 14 episode, "Saturday Night Live" mocks the ongoing Amber Heard/Johnny Depp defamation trial. The odd skit starts with Kate McKinnon as MSNBC anchor Nicolle Wallace who calls the trial "cuckoo." It only goes downhill from there, switching to a courtroom where Cecily Strong portrays an eager judge who is viewing the case, with its extreme and repeated allegations of domestic and sexual violence, as a fun diversion.

In half-heartedly attempting to talk about the problem of using domestic violence for entertainment, "SNL" makes itself part of the problem in a major way.

Actors Heard and Depp are in are in Virginia's Fairfax County Circuit Court due to a contentious lawsuit. Depp sued Heard for defamation after her name was attached to a 2018 op-ed where she discussed being a domestic abuse and sexual abuse survivor, though Depp was not mentioned in the article. Heard then counter-sued Depp for damage to her career, the reason for the continuing legal battles. Depp and Heard are divorced, after being married for a little over a year and being in a relationship for several years.

Many horrific details have emerged in court, particularly about alleged physical abuse, sexual abuse and substance abuse. But men's rights activists, TikTok and now "SNL" have fixated on one detail: fecal matter found in the couple's bed. Depp alleges Heard or a friend defecated in their bed to punish him; she said it was one of their dogs, ill after ingesting marijuana that belonged to Depp. It's a widely disputed story — and a minor detail in a case that also includes allegations of martial rape — but "SNL" won't let it go.

The show makes it the focus of the sketch, with a courtroom viewing of a "surveillance video" where Depp and Heard household staff discover the mess in the bed. Repeatedly, cast members in the skit acknowledge how ridiculous this is, yet they keep going, with Strong uttering lines such as she'd "like to see more of this video . . . because it's funny," and "We don't have to watch any of it but we want to. So, hush." Strong's judge character says she finds the trial "amusing . . . You bad, Captain Jack." She then lifts up a full glass of wine in toast to Depp, on the stand.

Strong appears less and less committed to the sketch as it goes on, perhaps realizing the scene is bombing with the studio audience (and the viewers at home) or perhaps never enthusiastic about the lackluster sketch to begin with. It is telling that it's the women cast members who are forced to perform the primary roles in the sketch — yet Heard is not represented — along with actors of color: in the show, Depp and Heard's entire domestic staff are Latinx or Black.

Reactions to the sketch have been overwhelmingly negative, with many viewers responding harshly to the show making light of very serious allegations of abuse. By focusing on the juvenile fecal matter story, "SNL "makes the case more of a joke. "This trial is fun," Strong's character says.

But it isn't fun. Coming at a time when the rights of vulnerable people are more and more under attack, when Chris Rock – who endured violence witnessed by millions – can make a quip like, "Believe all women except Amber Heard," "SNL" has never been less funny or less relevant. As Kristyn Burtt wrote, the show "confirmed just how little empathy we have."

Several times in the sketch, women performers express in lackluster asides how they enjoy the case and how they're relieved it isn't about them. As McKinnon's news anchor says: "With all the problems in the world, isn't it nice to have a news story we can collectively watch and say, 'I'm glad it ain't me.'"

But for millions of women, it is them. According to the National Coalition Against Domestic Violence, 1 in 4 women will experience severe domestic violence, sexual violence from a partner or stalking from an intimate partner leading to injury, PTSD and more. That amounts to about 20 people per minute being abused. The mockery around the trial, the vitriol directed specifically at Heard, the jokes that focus on the most immature aspect (while ignoring real stories of violence) all make it harder for victims to come forward, to seek support — to leave, already a nearly insurmountable task. We need to do anything other than what "SNL" did, which is to disbelieve, to downplay and dismiss.

Watch the "Saturday Night Live" sketch below, via YouTube.