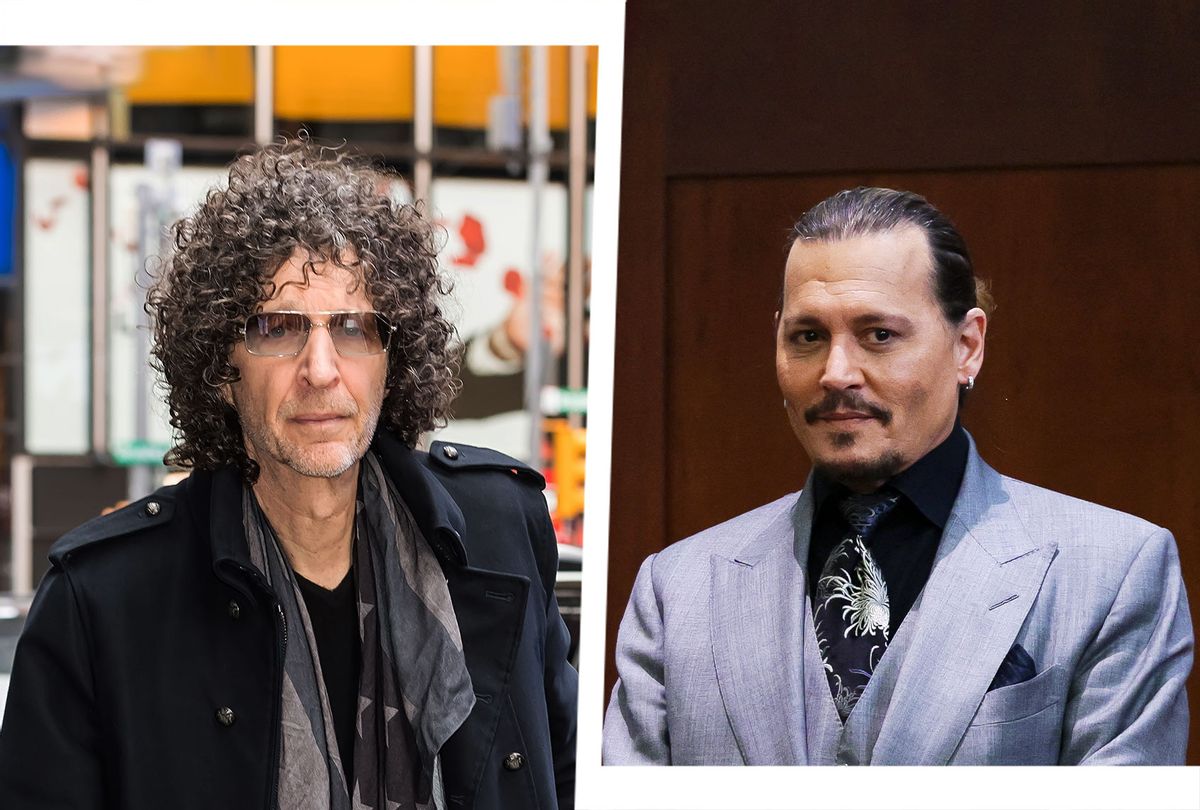 Radio and television personality Howard Stern is seen arriving to the ABC studio for GMA on May 09, 2019 in New York City. | US actor Johnny Depp looks on at the end of the second day of his testimony during the defamation trial against his ex-wife Amber Heard, at the Fairfax County Circuit Courthouse in Fairfax, Virginia, April 20, 2022. (Photo illustration by Salon/Getty Images)
--

Howard Stern shared his thoughts about the ongoing Johnny Depp and Amber Heard defamation trial, specifically criticizing the plaintiff in the case.

In a recent episode of his SiriusXM radio show "The Howard Stern Show," Stern discussed recent developments within the trial — which has been livestreamed since April 11 — before accusing Depp of "overacting" throughout his testimony. Depp is suing Heard over a 2018 Washington Post op-ed, in which Heard details personal accounts of domestic violence but refrains from explicitly naming Depp as her abuser. Heard's legal team reportedly tried to block cameras from covering the trial, however, Depp's team did not publicly challenge the decision, which was approved by Judge Penney Azcarate.

"The reason he wanted that on — he wanted it televised [because] that's what narcissists do," Stern said of Depp, per Mediaite. "They think they can talk their way out of anything. I think Johnny Depp is a huge narcissist and what I mean by that is — he figured, 'I'll put this on TV and because I'm so persuasive and because I'm so smart, I'm such a wonderful guy.'"

Stern didn't stop there — he then cited clips from the trial as evidence of Depp behaving like a "narcissist."

"I'll play you some clips from the Johnny Depp trial. If he isn't acting — I mean, he's so overacting because he's writing his own material as he goes along," Stern added. "You know, I gotta tell you, he's wrong. He shouldn't be putting this on TV in any shape."

Co-host Robin Quivers agreed with Stern, saying, "[Depp] is trying to save his career. I don't think this is going to help."

Stern later threw jabs at Depp's lengthy testimony, which took place over the course of two days. "Think about that, lots of room to embarrass yourself," the host said. "Two full f**king days!"

Stern's final criticism of Depp was the actor's accent. Stern claimed that Depp, who was born in Owensboro, Kentucky, doesn't sound like someone who is from "the South of the Midwest."

"First of all, his difficulty in speaking the English language is fantastic . . . And the accent," Stern said. "First of all, isn't he from like the South of the Midwest? Johnny Depp was born in Kentucky. Does that sound like a guy from Kentucky?"

Depp's cross-examination ended on April 25. Heard has yet to take the stand to begin her testimony.