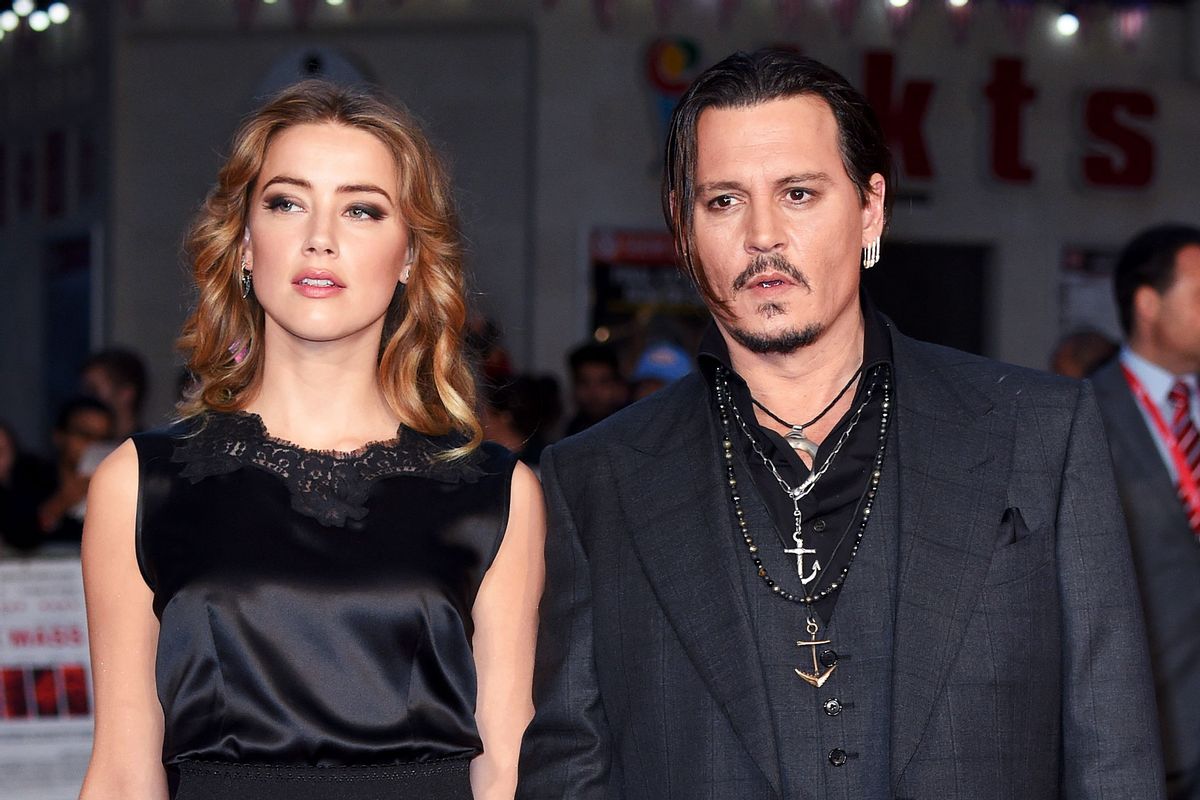 Amber Heard and Johnny Depp's legal battles are now in the spotlight as the estranged pair face off in a $100 million defamation trial.

The current case at hand concerns Heard's 2018 op-ed for The Washington Post, in which the "Aquaman" actor self-identifies as a survivor of domestic abuse and sexual violence. Just two years prior, Heard filed for divorce from Depp, alleging that he had physically abused her throughout their relationship. In her piece, Heard did not explicitly mention Depp, but it didn't take long for the public to put the pieces together and trace the accusations.

What came afterwards was chaos. Depp was dropped from his leading roles in the "Pirates of the Caribbean" and "Fantastic Beasts" franchises, after which he sued Heard for $50 million, accusing her of defamation. Heard then countersued for $100 million, claiming Depp had attempted to slander her name and smear her career.

But how did a Hollywood romance become so ugly, and what's happened since? Here's everything you need to know about their tumultuous relationship, its breakdown and the latest updates on the trial, which formally began April 11 at Virginia's Fairfax County Circuit Court.

The early days of a rocky relationship

In 2009, Heard and Depp met on the set of "The Rum Diary," Bruce Robinson's comedy-drama film based on the 1998 novel of the same name. The pair were cast as each other's love interest — Depp as the struggling author-turned-journalist Paul Kemp and Heard as Chenault, the fiancée of a shady businessman. At the time, Depp was dating French singer Vanessa Paradis, his long-time partner of 14 years, while Heard was in a relationship with photographer Tasya van Ree. Heard and Depp officially started dating in 2012 and three years later, they tied the knot in a private ceremony in L.A.

Life was seemingly great for Hollywood's "it couple" for a while. But in 2016, only a year later, Heard filed for divorce from Depp and later obtained a temporary restraining order against him. According to a report from The Guardian, Heard alleged Depp had physically assaulted her, usually while under the influence of drugs and alcohol. The court filing cited photographs of Heard's bruised face and pictures of smashed bottles in the couple's apartment as evidence.

A statement from Heard to the Los Angeles Superior Court also recounted an incident in May 2016, when Depp "began obsessing over something that wasn't true," "became extremely angry" and threw a phone at Heard, hitting her cheek and eye "with extreme force."

"Our relationship was intensely passionate and at times volatile, but always bound by love."

On August 16, 2016, a $7 million settlement was reached out of court. Per The Independent, Heard and Depp released a joint statement, saying: "Our relationship was intensely passionate and at times volatile, but always bound by love. Neither party has made false accusations for financial gain. There was never any intent of physical or emotional harm."

Depp and Heard's divorce was finalized in 2017. According to The Hollywood Reporter, the settlement included a non-disparagement agreement, which prohibited the pair from saying anything negative about their relationship and its fallout.

On December 18, 2018, Heard's op-ed, titled "I spoke up against sexual violence — and faced our culture's wrath. That has to change," was published in The Washington Post. The piece detailed her own experience with sexual violence and spoke on behalf of her fellow survivors.

"I was exposed to abuse at a very young age. I knew certain things early on, without ever having to be told. I knew that men have the power — physically, socially and financially — and that a lot of institutions support that arrangement," Heard wrote. "I knew this long before I had the words to articulate it, and I bet you learned it young, too."

"Like many women, I had been harassed and sexually assaulted by the time I was of college age. But I kept quiet — I did not expect filing complaints to bring justice," she continued. "And I didn't see myself as a victim."

Heard did not name Depp in her piece.

Depp sued The Sun for libel and lost

The actor filed his libel claim against News Group Newspapers Limited after the media company's British tabloid newspaper, The Sun, referred to Depp as a "wife-beater" in an April 2018 column. According to CNN, the trial was heard in July at the Royal Courts of Justice in London. The trial also highlighted 14 alleged incidents of abuse that Heard said took place between 2013 and 2016.

Depp once again denied the claims and countered with his own allegations. He claimed Heard, or one of her friends, defecated on his bed while he was away. He accused Heard of constructing a kind of hoax "'insurance policy' – presumably in the event that the marriage broke down." And he even characterized Heard as a "gold-digger," a "narcissist" and a sociopath.

On November 3, 2020, Depp lost the high-stakes case after a judge ruled in favor of The Sun and its executive editor Dan Wootton.

"The claimant [Depp] has not succeeded in his action for libel . . . The defendants [the Sun and News Group Newspapers] have shown that what they published in the meaning which I have held the words to bear was substantially true," said the judge, Justice Andrew Nicol. "I have found that the great majority of alleged assaults of Ms Heard by Mr Depp have been proved to the civil standard.

"I have reached these conclusions having examined in detail the 14 incidents on which the defendants rely as well as the overarching considerations which the claimant submitted I should take into account," he added. "In those circumstances, parliament has said that a defendant has a complete defence."

"I can only hope that karma kicks in and takes the gift of breath from her."

The judge also cited a 2016 email sent by Depp, which illustrated the actor's unfiltered sentiments towards Heard. A snippet of the message reads as follows:

"I have no mercy, no fear and not an ounce of emotion or what I once thought was love for this gold digging, low level, dime a dozen, mushy, pointless dangling overused flappy fish market . . .  I can only hope that karma kicks in and takes the gift of breath from her . . .  Sorry man . . . But NOW I will stop at nothing!!!"

Depp then sued Heard for defamation

The Post op-ed became a topic of concern in 2019 when Depp sued Heard for $50 million for defamation. Depp denied the abuse allegations, shutting them down as "demonstrably false," and claimed Heard's piece "brought new damage to Mr. Depp's reputation and career." He also argued that Heard "is not a victim of domestic abuse" but rather, "a perpetrator." The suit also asserted that Heard's allegations were part of an "elaborate hoax to generate positive publicity."

Heard and her lawyers attempted to dismiss the suit but were ultimately unsuccessful. Heard then countersued for $100 million in August 2020, which brings us to . . .

April 11: Heard and Depp's trial commenced Monday the Fairfax County Courthouse. And as expected, things got heated pretty quickly. In their opening statements, Depp's legal team echoed the actor's past claims and asserted that Heard made up her accusations in order to advance her own career.

"She presented herself as the face of the #MeToo movement — the virtuous representative of innocent women across the country and the world who have truly suffered abuse," said Depp's attorney Camille Vasquez, per Variety. "The evidence will show that was a lie."

Heard's legal team, in response, argued that her allegations were all true.

"For years, all Mr. Depp has wanted to do is humiliate Amber, to haunt her, to wreck her career," said Heard's attorney Ben Rottenborn, who also called Depp "an obsessed ex-husband hellbent on revenge."

April 12: On Tuesday, Depp's sister Christi Dembrowski, 61, testified about their abusive mother betty Sue Palmer as they were growing up and how their father would not interfere.

"We would run and hide . . . She would hit us. She would throw things," said Dembrowski, according to People. She added that not only did Depp never hit back, but this treatment made him determined to stop the cycle of abuse.

"Both Johnny and I actually, we decided that once we left, once we had our own home, we were never going to repeat, ever, anything similar in any way to our childhood. We were gonna do it different."

"I want her to take her responsibility, to heal and move on."

"I want her to take her responsibility, to heal and move on," Baruch said. "There are so many people affected by this stuff, it's not fair and it's not right, what she did and what happened, for so many people to be affected. It's insane."

He also claims that he saw Heard days after she said Depp beat her in 2016 and that she did not display any physical evidence of abuse on her face: "no marks on her face, no swelling, no bruising, no redness, no cuts, no nothing."

In cross-examination, however, Barusch admitted he had received a text message from Depp in October 2016 that said he hoped Heard's "rotting corpse is decomposing in the f**king trunk of a Honda Civic," according to People.