"What can be scarier than death?": Ukraine filmmaker on making a war film during wartime 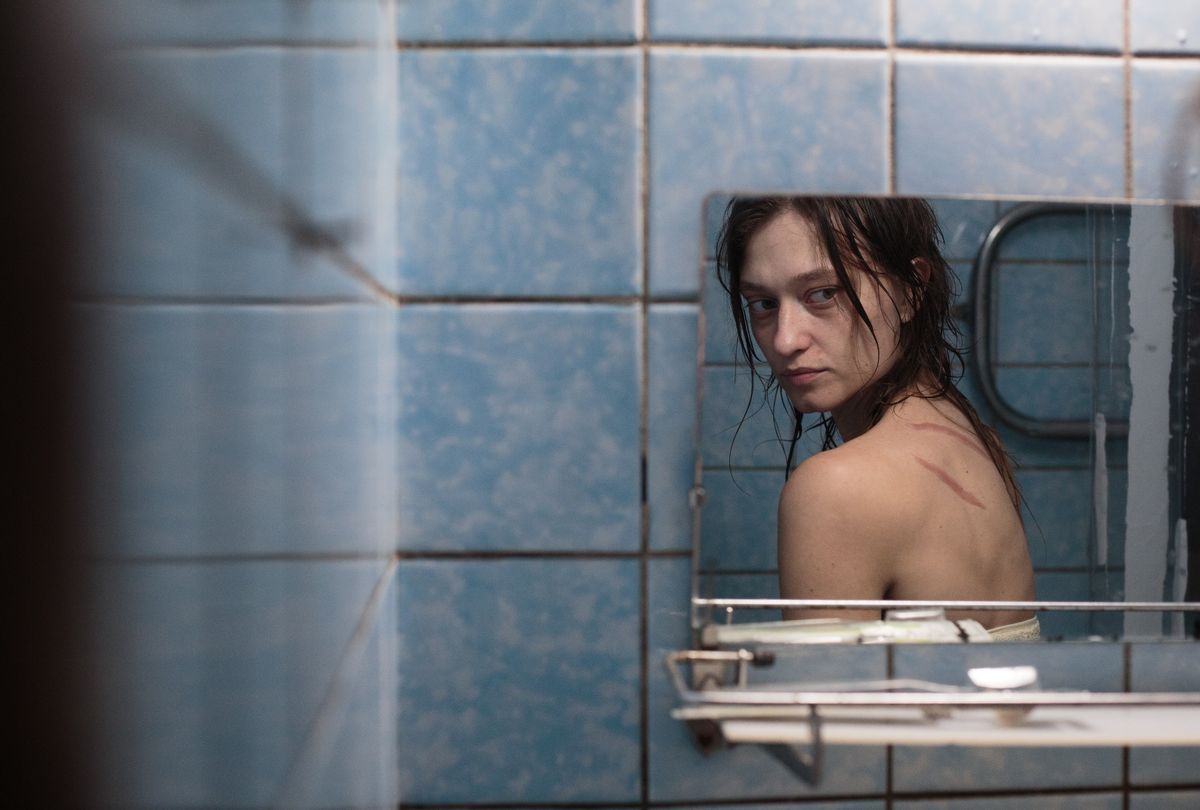 "Butterfly Vision" is the stunning feature debut film by Ukrainian director Maksym Nakonechnyi, who cowrote the film with Iryna Tsilyk. It is screening as part of the Un Certain Regard program at this year's Cannes Film Festival. This intimate drama is certainly timely as it depicts Lilia (Rita Burkovska), a soldier who works with drones, returning home after being held captive in Donbass for two months by separatists.

Lilia is scarred physically — there are marks on her body — and emotionally. She has episodes of PTSD and is skittish when her husband Tokha (Liubomyr Valivots) first tries to touch her. What is more, she is pregnant, having been raped while imprisoned. Tokha is furious and vows revenge, and Lilia opts against having an abortion. Their relationship suffers as a result, but Lilia finds resilience and a will to live in the face of the trauma she has endured.

Nakonechnyi captures Lilia's fragmented psyche, from sitting with her in silence as she absorbs information or cutting between her past and present in ways that magnify her situation. This is a tough but necessary and compassionate film that speaks to the crisis unfolding in the Ukraine right now.

The filmmaker spoke with Salon in the days before his film's premiere at Cannes about making "Butterfly Vision."

What inspired you to tell this story and how did it depict or foreshadow what is currently happening in the Ukraine?

"I started thinking: What can be scarier than death?"

I had the idea for the film when I was editing another film, "Invisible Battalion," a documentary about women fighting in the Russian-Ukrainian war. It was six short portraits of female soldiers, so I was listening during the edit and seeing scenes again and again. The stories and words of the protagonists impressed me deeply, especially when one woman said the scariest thing for her was the captivity. I started thinking: What can be scarier than death? That's how I made up the fictional story about Lilia. I started writing a script and worked with Iryna Tsilyk, my cowriter, who is also the codirector of "Invisible Battalion." I was grateful because she is carrying a lot of experiences that I have not had — she's a mother, and her husband is a veteran. She could bring a lot of insight and perspectives to the story.

One of the protagonists of that documentary film, Julia "Tayra" Paevska, is unfortunately in captivity now. She was captured in Mariupol almost 50 days ago, and we are now claiming for her immediate exchange. She was a volunteer paramedic; she cannot be considered a prisoner of war and has to be released immediately.

Can you talk about how you were able to make this film both during the pandemic and at wartime.

"The war affected the shooting ... We were told by authorities that the location we secured was too dangerous and we had to move.

It was made during wartime from the very first moment of the idea. During the research, we were travelling to the frontline with the main actress, production designer and cinematographer, and seeing the soldier's routines and their daily life and researching and understanding what war is like. When we started shooting, the pandemic happened. It was really kind of tough, to be honest. We were supposed to start shooting late spring, but we had to postpone because of the pandemic and replan and reorganize everything following all the restrictions. We started shooting in the summer, and after the first day, I tested positive for COVID, so we had to replan and postpone, and reschedule. After the first shooting day of the second block, the director of photography had a positive COVID test. Again, postpone and reschedule. We had a solid pre-production and that made us confident that despite all these obstacles we will finish it.

The war affected the shooting — beside that it was a war-related story — we were doing research with different people who are either participants or witnesses or victims of war. In the last shooting block, there was a situation where we had chosen the location and permission to shoot, but it was close to the frontlines. When Russia started gathering their troops near the borders for the first time — April 2021 — we were told by authorities that the location we secured was too dangerous and we had to move. We had to choose another location without actually seeing it.

We were lucky to have the film sent to the mastering studio one or two days prior to the full-scale invasion on Feb. 24. Once the first shelling arrived in Kyiv, and we were hiding in the metro station, I contacted our post-production partner and asked if we had sent everything to the Swedes who were in charge of mastering, and the post-production coordinator said we were all covered. I felt a big relief that no matter what happens, the film will be finished.

What does it mean to be part of the Un Certain Regard program at Cannes, which is rare for a Ukrainian film? And can you discuss attending the festival, given the situation in the Ukraine?

"We tried to get a collective image of women at war."

I managed to get permission from a request from the Ukrainian State Agency for the border service because it's not easy for men to leave the country now because of martial law. To be present at Un Certain Regard is a big honor and a sign of great recognition to my crew and me as filmmakers and to Ukrainian cinema. At the same time, I feel that it is really essential to be clear with our position and our narrative and our point of view on the cultural process even despite disagreements with the festival's position. The film should speak for itself and being presented at Un Certain Regard gives that possibility of speaking out and making our voices heard. We should use opportunity to gain more recognition.

What decisions did you make about Lilia's resilient character — her work as a soldier, her relationship with her husband and family as well as her decisions about her baby? She is described as "an unbreakable woman," but she is also naïve, reserved, and vulnerable as a result of her PTSD.

Lilia's character doesn't have a certain prototype. My cowriter and Rita, who portrayed the main protagonist, and I collected different stories of women who were victims of war violence, or fighting the war, or held as captives. We tried to get a collective image of women at war. Rita has a strong personality and a strong individuality, so I knew she would bring her vision into the character. It includes unbreakable-ness and vulnerability and naiveness and bravery and stubbornness and maturity. After I wrote the story, that's why I chose such a perspective — a female and ex-captive and sexual violence victim perspective. This is an inclusive perspective that is allows you to make the story universal.

The style of the film is very intimate, yet there are flourishes such as the drone shots, or "glitches" that suggest Lilia's past trauma. Can you talk about your approach to telling this story and getting inside Lilia's headspace?

It was a multilayered process at every stage. Even writing the script we wanted to express what someone with PTSD experiences and just observing a life of such a person and seeing small details that tell big stories — not "talking it out." When we started researching and did pre-production with RIta and director of photography, we discussed the shooting style and that we wanted to include drone shots because it was part of Lilia's vision; it was part of her work at war. We understood it was something that would remind her, or something she would see or recall. Every filmmaker likes drone shots, but we were lucky to have a story that fit it and makes it an artistic decision.

We started elaborating more on set and in post-production on this combination with the inclusion of different images, such as media shots that allowed us to start exploring the fringes of digital, social, personal, and metaphysical images and combining it. It makes the film eclectic, but it is a good expression of our reality now, as it relates to current affairs and life as a society and as a nation. The glitches came at the last stage of post-production.

One of the most striking scenes has Lilia boarding a bus and being both honored for her service by some passengers, criticized by others, and thrown off by the driver. Another woman gets off with her in solidarity, showing respect. I appreciate how you show the various responses. Can you discuss this scene?

It was our intention to include this layer — to show what the film is about, that the war isn't over once you leave the battlefield. It just becomes more complicated, and it can follow and chase you anywhere, and the enemy can be someone unexpected, like your fellow citizen boarding a bus with you. Suddenly, your allies may not be fully your allies, civilian life is more complicated than life at war, and why it can be scary for people with war experience.

Tokha's character is also interesting. He is a hothead. He externalizes everything that Lilia internalizes. What observations do you have about his character and male soldiers who are unable to contain their justifiable rage?

Tokha is not an antagonist; he is the same victim-participant as Lilia, but he is dealing with his trauma and his experience in his own way, which is accessible, and understandable, and organic to him. He is not able to cope with that due to his nature, or other reasons. Despite him being a hothead and doing controversial things which immediately have consequences, it was important for us to show that this is a part of his war, and what is happening to him and how he reacts, is a result of the enemy attacking him personally as well as part of the larger society.

What do you want viewers to come to understand from seeing your film?

What I realized making the film is that you never can get someone's traumatic experience without experiencing it personally. It is impossible.