"Obi-Wan Kenobi" reminds us that the Force is not always with us – and that's fine!

Ewan McGregor – with his dad bod – is more space daddy than Jedi zaddy, and that gives us hope 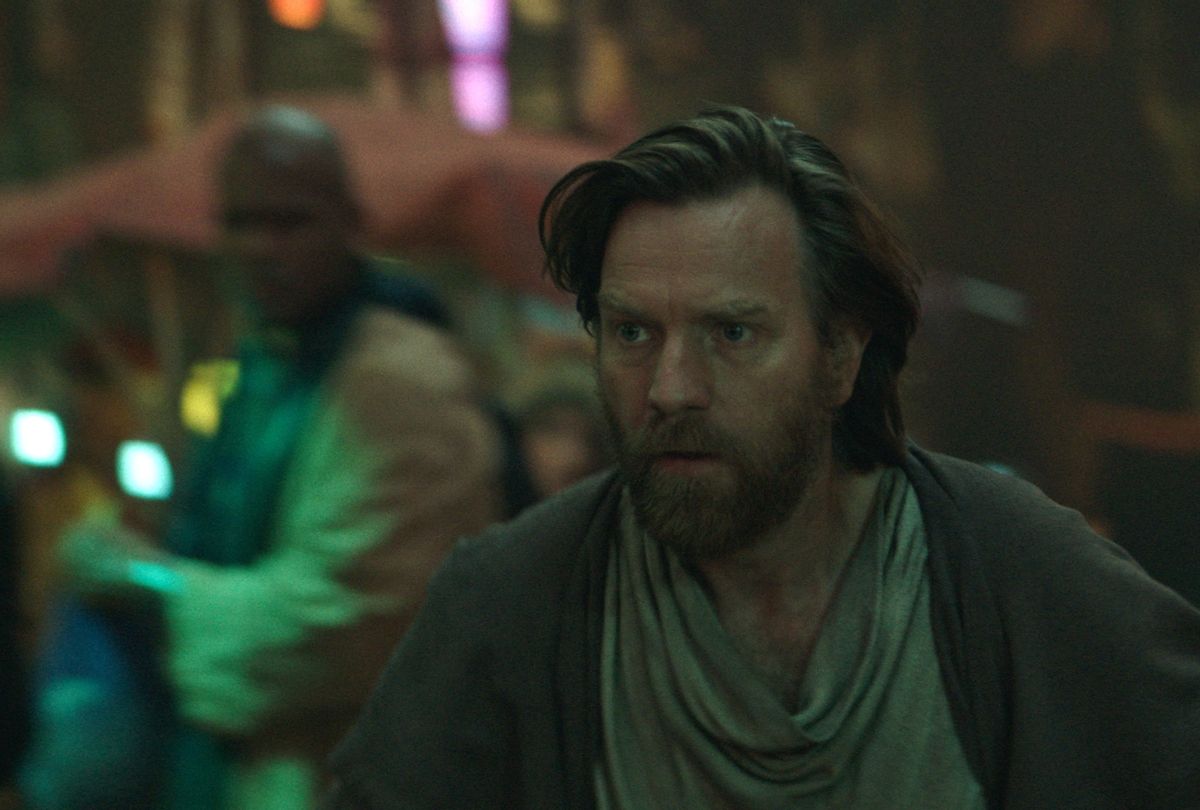 Days before "Obi-Wan Kenobi" premiered, a meme circulated that features Ewan McGregor's mug next to that of Sir Alec Guinness – the two faces of the "Star Wars" universe's second most beloved mentor. McGregor's lined face still carries some youthful ruddiness, and his mane and beard are dark.

Guinness's hair, on the other hand, is completely white. He looks grandfatherly.

And as the post's author points out, Obi-Wan Kenobi goes from Ewan – Generation X's cool boyfriend, star of "Trainspotting" and a series featuring him roughing it on motorcycles – to stately old Sir Alex in nine years.

The "Star Wars" movies and TV shows don't specify the ages of its characters, save for Master Yoda, who announced that he was 900 years old before he laid down for his long Force nap. This leaves room for actors like McGregor to age into the version of the character that's been etched into Generation X's consciousness since we were toddlers.

RELATED: Maybe we expected too much of "The Book of Boba Fett"

Less expected, though, is the fact that the Obi-Wan we're meeting in this series, a version one decade removed from the fall of Anakin and the rise of Darth Vader, does not have it together. He's out of shape and fearful. His connection with the Force has gone to seed. And when he comes face to face with 10-year-old Leia Organa (Vivien Lyra Blair) for the first time, her initial evaluation of him is, "You're a Jedi? It just . . . you seem kinda old and beat up." 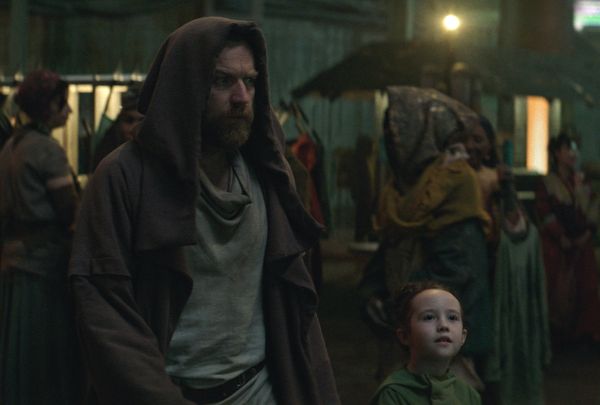 Obi-Wan Kenobi (Ewan McGregor) and Princess Leia Organa (Vivien Lyra Blair) in "Obi-Wan Kenobi" (Lucasfilm/Disney+)When a person spends a lifetime marinating in "Star Wars" mythology, as so many members of my generation did, certain traits of a character are assumed to be changeless. Obi-Wan is marked by his bravery, a trait McGregor develops in the prequels that carry through this galaxy's animated chronicles of the Clone Wars. But if the first version of a personality roots in us the deepest, then Guinness' guru is the one I'm betting many were expecting would show up in this series.

McGregor could have played the Jedi we looked up to as some space zaddy. Instead, he's ... dragging him down the dad bod route.

One of the kindest acts a show can perform is to demystify our legends and heroes. That also can be one of the cruelest thing its writers can do, depending on what transpires. Either way, making our myth bleed a little enables us to be kinder to ourselves when it comes to setting expectations.

With this take on Obi-Wan, McGregor is doing a favor for "Star Wars" fans that are his age. He could have played the Jedi we looked up to as some space zaddy. Instead, he's throwing in with the mere mortals and dragging him down the dad bod route. 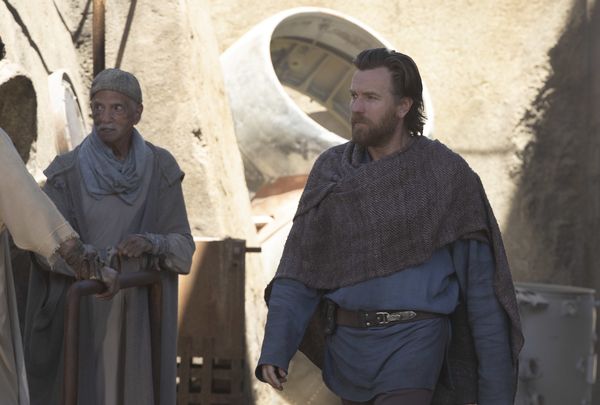 Obi-Wan Kenobi (Ewan McGregor) in "Obi-Wan Kenobi" (Lucasfilm/Disney+)It's long been drilled into us that Yoda is all-knowing, and Obi-Wan is mysterious and wise. But this version of the former General Kenobi, Jedi legend, is an exploding jar of rookie mistakes: blowing his and young Leia's cover in front of stormtroopers, getting his cloak handed to him in a creaky duel with his former apprentice, asking the twin sister of the boy he's watching over how old she is.

He has much in common with today's Earthlings that have lost all connection to calendars and clocks. Like many of us, he's also fatigue-weathered and figuring out how to navigate a sea of people when he's forgotten how to swim through connecting with Blair's Leia, an observant kid who isn't so sure she fits in anywhere.

"Obi-Wan Kenobi," like other "Star Wars" series building out established characters, is equal parts fan service and bridge-building. But in many ways, the stakes for it are higher than they may have been for "The Book of Boba Fett." We never really knew that bounty hunter and, as it turns out, the show may have been better off maintaining his mystery.

But McGregor's reprise of his character is saddled with expectations. This season establishes the history Leia references in "A New Hope" when she sends for him; that part is easy. Depending on who you are, watching Ben Kenobi flail and be defeated in the third episode by his former student Anakin Skywalker (Hayden Christensen), now wearing Darth Vader's suit, might feel like an attack. Perhaps that's the point. 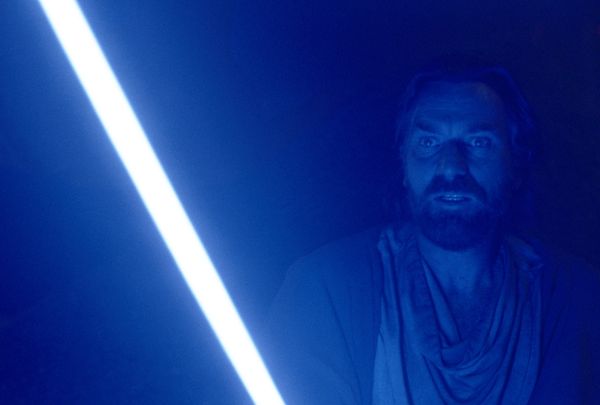 Concurrently, part of me wonders if some of the vitriol being hurled toward Ingram is a reaction to her wielding power while the show's legendary hero is being tossed around like a rag. The hero's journey involves falling and rising again, and the way these "Star Wars" series have played out, I'm guessing that Obi-Wan will get at least some of his mojo back by the end of the season.

This takes us closer to the version of the Jedi Master Guinness originated in the first "Star Wars," when he was 63 years old. McGregor was 28 when he assumed the part, playing him as a padawan in 1999's "Episode I – The Phantom Menace," and 35 in 2005's "Episode III – Revenge of the Sith," when Obi-Wan closed the book on his apprenticeship of Anakin Skywalker by cutting him off at the knees.

That doesn't mean the character's age corresponds neatly with the actors when they played him. But as we reconnect with McGregor in "Obi-Wan Kenobi," he's a lot closer to the age Guinness was in 1977, which means a lot of the original trilogy's generation is too. It's a weird but wonderful thing to meet a fictional hero we've grown up with, at a time when his life may align with our own so uncomfortably well. As turns out, even Jedi doubt themselves and the Force. Somehow, that gives us hope.