"I love [Depp] ... No bad feelings or ill will towards him at all," Heard told Savannah Guthrie 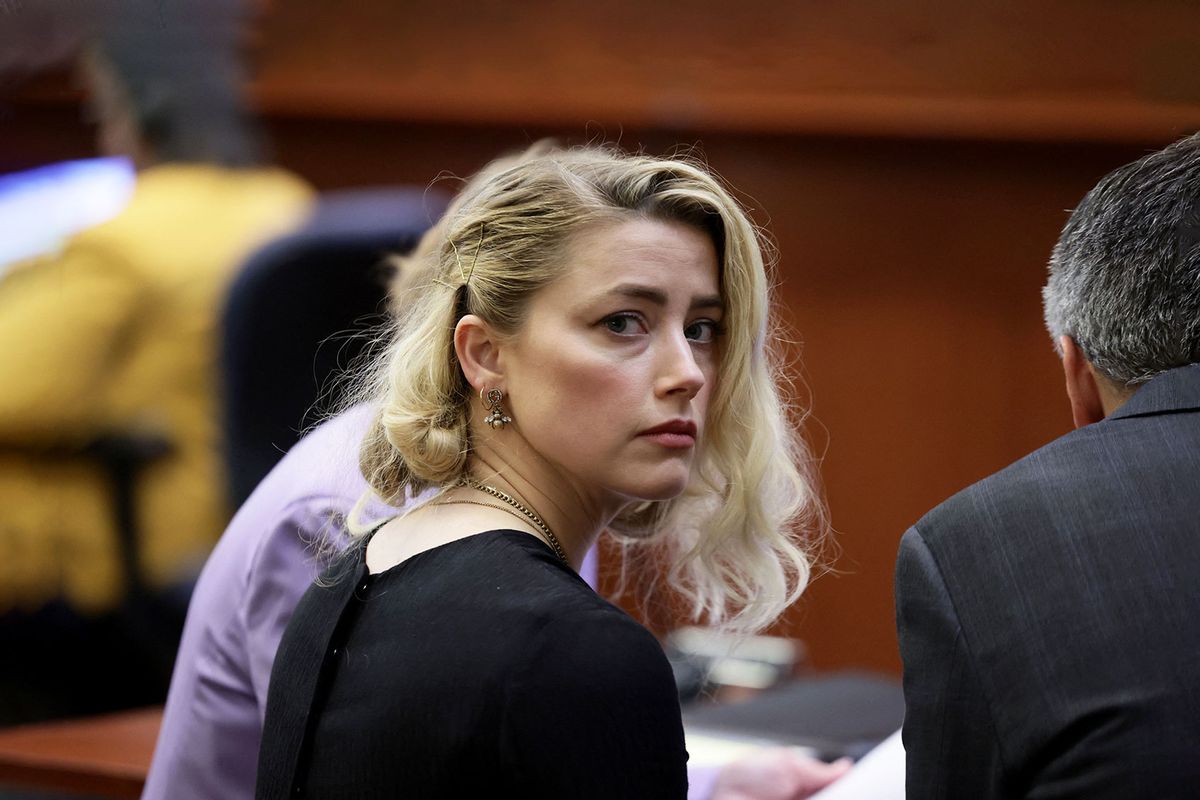 US actress Amber Heard waits before the jury said that they believe she defamed ex-husband Johnny Depp, while announcing split verdicts in favor of both her ex-husband Johnny Depp and Heard on their claim and counter-claim in the Depp v. Heard civil defamation trial at the Fairfax County Circuit Courthouse in Fairfax, Virginia, on June 1, 2022. (EVELYN HOCKSTEIN/POOL/AFP via Getty Images)
--

On Tuesday and Wednesday, Amber Heard made her first television appearances following the conclusion of a contentious defamation lawsuit brought by her former husband Johnny Depp.

In a two-part "Today" show interview Heard sat down with Savannah Guthrie to discuss the aftermath of the trial and its impact on her personal life. In a shocking moment, the actor also opened up about her endless adoration for Depp and revealed her looming fear post-trial.

"I'm scared that no matter what I do…every step I take will present another opportunity, for this sort of silencing, which is what, I guess, a defamation lawsuit is meant to do," Heard said. "It's meant to take your voice."

The former couple's six-week-long trial came to a dramatic end earlier this month after a seven-person jury determined that Heard had acted with "malice" in her 2018 op-ed published for The Washington Post. Per the jury, Heard's written accounts of domestic abuse were enough to qualify as defamation and subsequently tainted Depp's own career and reputation. Heard was ultimately awarded $2 million in compensatory damages for her counterclaim while Depp was awarded $10 million in compensatory damages and $350,000 in punitive damages.

"I think no matter what, it will mean something," she added. "I did the right thing. I did everything I could to stand up for myself and the truth."

Here are the biggest takeaways from the interview:

The actor criticized the damaging coverage she received across social media, where she became a subject of mockery while Depp was hailed as a hero.

"I don't care what one thinks about me or what judgments you want to make about what happened in the privacy of my own home, in my marriage, behind closed doors," Heard told Guthrie. "I don't presume the average person should know those things. And so I don't take it personally.

Heard and Depp's treatment on platforms like TikTok and Twitter have been startingly different. Many fans of the "Pirates of the Caribbean" actor launched a "Justice for Johnny" movement on behalf of Depp while also poking fun at Heard's testimony in an attempt to diminish her abuse allegations.

"I think even the most well-intentioned juror . . . it would have been impossible to avoid this," Heard said of the blatant hate she received both online and in person. "Every single day I passed three, four, sometimes six city blocks lined with people holding signs saying, 'Burn the Witch,' 'Death to Amber.' After three and a half weeks, I took the stand and saw a courtroom packed full of Captain Jack Sparrow fans who were vocal, energized."

"Says the lawyer for the man who convinced the world he had scissors for fingers? I'm the performer?" Heard responded when asked about the accusations from members of the court. "I had listened to weeks of testimony insinuating or saying quite directly that I'm a terrible actress, so I'm a bit confused how I could be both."

The actor also said she "stand[s] by every word of my testimony" and maintained her own innocence, asserting that the abuse allegations made against Depp were all true.

"I made a lot of mistakes, but I've always told the truth."

3 Heard claims the audio tapes, in which she spoke of starting fights with Depp, were edited and therefore inaccurate

When talking about the abuse she endured throughout her relationship with Depp, Heard said she never "had to instigate" violence but instead, "responded to it."

"When you're living in violence and it becomes normal, as I testified to, you have to adapt," she explained.

Heard also revealed that the audio recordings where she admitted to "hitting" and abusing Depp were edited and essentially, not evidence of what was actually taking place behind closed doors.

"I know much has been made of these audiotapes. They were first leaked online after being edited," she said. "What you would hear in those clips are not evidence of what was happening. It was evidence of a negotiation of how to talk about that with your abuser.

"As I testified on the stand about this, when your life is at risk, not only will you take the blame for things that you shouldn't take the blame for, but when you're in an abusive dynamic psychologically, emotionally and physically, you don't have the resources that, say, you or I do with the luxury of saying, 'Hey, this is black and white,'" Heard added. "Because it's anything but when you're living in it."

Heard told Guthrie that she has nothing but love for her ex-partner, even after their long history of legal battles.

"I love him. I loved him with all my heart," she said. "And I tried the best I could to make a deeply broken relationship work. I couldn't. No bad feelings or ill will towards him at all. I know that might be hard to understand or it might be really easy to understand. If you've ever loved anyone it should be easy."

5   Heard fears Depp may sue her for defamation ... again

Throughout the interview, she frequently described the trial as "the most humiliating and horrible thing I've ever been through." As Guthrie mentioned, Heard also previously texted Depp that she would suffer "total global humiliation" during the case's hearing.

"I testified to this. I'm not a good victim, I get it. I'm not a likable victim. I'm not a perfect victim," she continued. "But when I testified I asked the jury to just see me as human and hear his [Depp] own words, which is a promise to do this. It feels as though he has."

The actor also claimed that her Washington Post op-ed was not about Depp and that she had no intention of "cancelling" him.

"The op-ed wasn't about my relationship with Johnny," Heard explained. "What the op-ed was about was me loaning my voice to a bigger cultural conversation that we were having at the time."