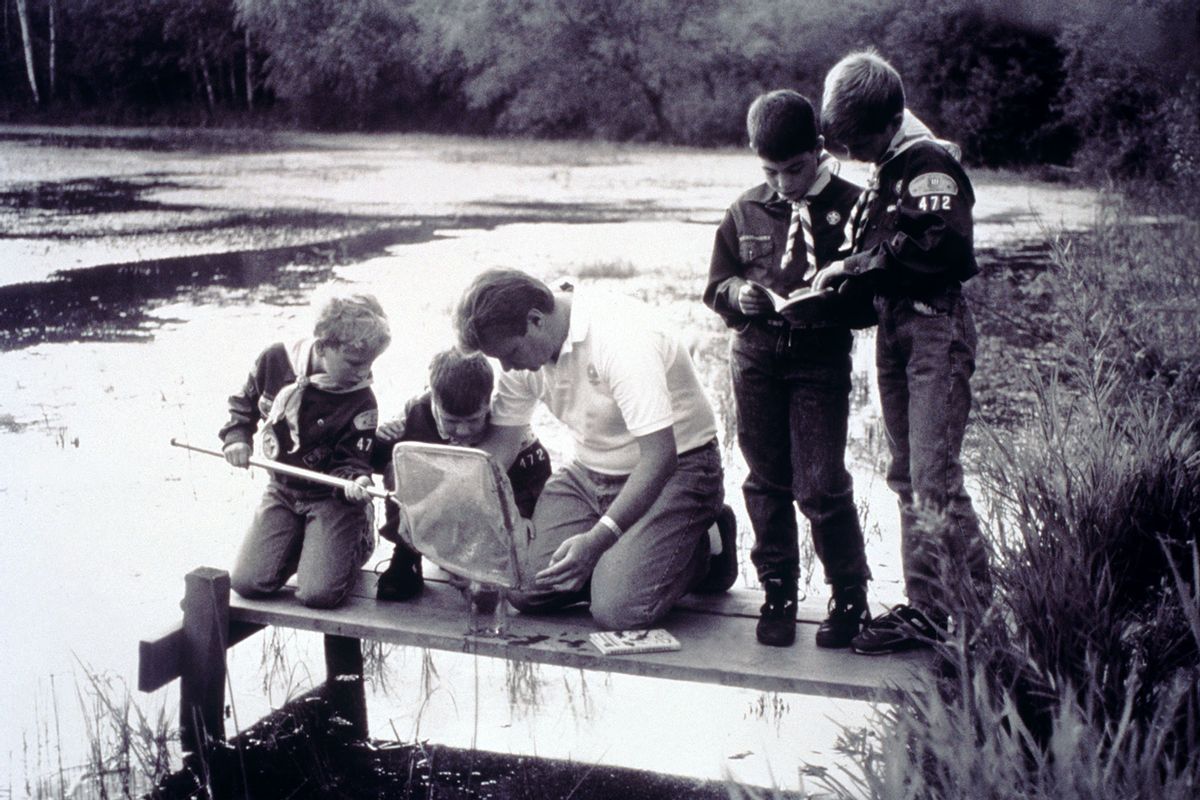 The Boy Scouts of America (BSA), once hailed as "a vital factor in American life," has long preached the importance of moral behavior, instilling a sense of trust among families that its programs can transform young boys into disciplined, well-rounded men.

Revered as one of the largest scouting organizations and one of the largest youth organizations in the nation, the BSA touts over 1 million participants and an impressive alumni, including Neil Armstrong, President John F. Kennedy and Steven Spielberg. Being a Scout became more than just donning a tan troop uniform complete with a patrol emblem and a merit-badge sash. It was about upholding — and embodying — the institution's principal promises: 1) Duty to God and country 2) Duty to other people and 3) Duty to self.

RELATED: "I was shocked and appalled": Ousted gay Boy Scout leader sounds off to Salon

For years, the BSA was successful in maintaining its admirable image. But that image hid a darkness underneath with the revelation that at least 7,800 suspected scouting leaders sexually abused 12,254 Boy Scouts members between 1944 and 2016.

The sex abuse claims and its painful history are now being revisited in Hulu's latest documentary, "Leave No Trace." The two-hour-long showcase features interviews with multiple survivors — many of whom are speaking out for the first time — along with the reporters and attorneys working closely on the investigations.

Here are just a few of the horrifying revelations from the documentary:

Humphrey, who served as a Scout from 1972 to 1974, was sexually abused between the ages of 11 and 13 by Thad Alton, his schoolteacher and Scoutmaster.

"I think back at all of the times that I was abused two, three, four times a week . . . at troop meetings, in the car after troop meetings, in the jug-band practice room, on the foam mats in the locker room, on camping trips, winter trips, summer trips," Humphrey recounted. "I mean, the first time I ever ejaculated was at the hands of this Scoutmaster."

He continued, "You know, it slowly became clear to me as I got older and a little more mature that something was wrong, that something wasn't right. I wanted to run away from it as fast and as hard as I could."

Humphrey revealed that he was abused more than 200 times and as a result, lost all his hair when he was 13 due to stress from the enduring trauma. He kept mum about the abuse for most of his life and broke his silence just five years prior, when he was 55 years old.

Today, Humphrey works as an IT consultant in Dallas, Texas, and leads the Official Tort Claimants' Committee (TCC), a group consisting of survivors who are fighting for the justice they deserve.

From 2015 to 2017, Yoxall was sexually abused by his Scoutmaster, Douglas Young. During his interview from home, Yoxall said he doesn't remember much about Young, such as what he looked like or how he acted. But he does remember one, distinct thing:

"I remember his smell and his smell was disgusting. But I don't really remember a lot of other stuff about him."

He added that his abuse began immediately during his first night of camp.

"The first thing that happened is he stuck his hand down behind . . . in my pants," Yoxall said while his parents sat just a few feet away from in the living room, horrified.

"First thing that was going through my head is, 'What the f**k,'" he continued. "It just, it got much worse from that. It progressed like really fast. I'd wake up with him doing stuff. I know he used to take pictures, as well."

Yoxall's parents explained that their son initially joined the Boy Scouts in hopes of becoming a police officer in the future. "We got manipulated. We got groomed. We got played hard," his father said sadly.

3  The abuse dated back to 1920, but the Boy Scouts of America did nothing

According to Peter Janci, an attorney and advocate for victims of sexual abuse, the leadership of the BSA were well aware that pedophiles were using the Scouting program to abuse dozens of boys in one troop.

"Starting back in the 1920s, they [BSA] had identified over a thousand men," Janci explained.

The names of each abuser were included in a list called the "red flag list." Also known as the "red list," the list's misleading name "led people to believe that the institution was trying to root out communists from their ranks" when they were actually identifying child molesters, said Nigel Jaquiss, an investigative reporter who won a Pulitzer Prize for his 2005 exposé on child sex abuse within the government of Oregon.

The list was only available to a small, select group of Boy Scouts executives who kept the files under lock and key. It wasn't shared with the public nor was it shared with law enforcement, as the BSA feared the abuse reports would damage its favorable reputation.

"Developing my body and my athleticism, it's another way of protecting myself to make sure that no one is going to harm me," said Lord, who was involved in Scouting from the ages of 11 to 20. "I get to own that."

Lord was sexually abused by Scout leader Lonnie Barnes, who also served as an assistant Scoutmaster. Just one week after the start of camp, Barnes was fired and removed from campgrounds.

"And it was, like, one of the best days of my life," Lord said. "He was rushed out of camp. They said they found a liquor bottle outside of his tent."

Despite his departure, Barnes was still involved with Scouting and the BSA.

"It did not affect his participation at all in the program," Lord recounted. "And he was the one who told me that if I told anyone, then he would kill me."

The first person who learned of Lord's abuse was his mother. But sadly, upon hearing the news, she experienced a stroke and passed away.

James Dale, who served as an assistant Scoutmaster of a New Jersey troop during the summer of 1990, was excluded from the program after an interview, in which Dale said he was gay, was published.

"Dear Mr. Dale, the ground for your membership revocation are the standards for leadership established by the Boy Scouts of America, which specifically forbid membership to homosexuals," read his letter of dismissal.

Dale, who was a Scout from the ages of 8 to 20, described his participation in the BSA as "the singular, most formative part of my youth." And even though he wasn't able to vocalize or understand his sexuality at a young age, he credited the BSA with helping him feel more confident about his own identity.

"I was not out when I was younger. And even in the back of my mind as a gay kid, I had that doubt or fear or, you know, self-hatred, you could even say," he explained. "The Boy Scouts really helped me not feel so bad about myself as a gay kid, even if I didn't have the words at the time. I was really caught off guard but it wasn't something I could also walk away from."

Dale soon took matters into his own hands and sued the BSA, alleging that it was actively shutting out members simply on the basis of their sexuality. The New Jersey Supreme Court ruled in favor of Dale, which prompted the BSA to challenge the case and appeal to the United States Supreme Court.

On June 28, 2000, the Supreme Court voted in favor of the BSA, ruling that its exclusion of gay Scouts and leaders did not qualify as discrimination.

Watch the official trailer for "Leave No Trace" below, via YouTube: