Baratunde Thurston is making America love the outdoors again: "There's history in nature for us"

Comedian Baratunde Thurston talks about PBS' "America Outdoors," taking viewers into the wild inside of the country 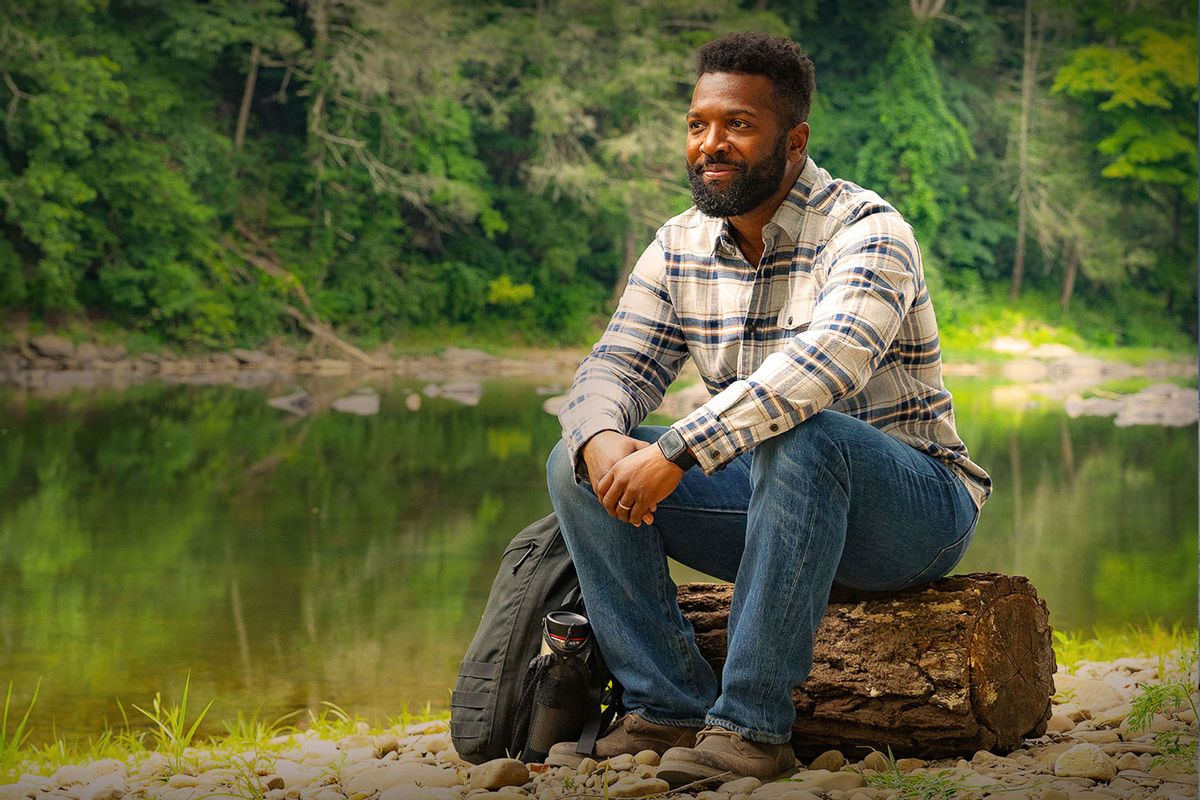 Long before Baratunde Thurston became a bestselling author, a producer for "The Daily Show with Trevor Noah" or created his first podcast, the host of "America Outdoors" was a kid who loved being in nature. He credits his mother for that, recalling that his earliest adventures happened on the back of her bicycle, riding around the streets of Washington, D.C..

Once his mom bought a car, the road opened for their family even more. "By the time I was 12, we had visited every state on the East Coast. We mapped them out very carefully," he told Salon in a recent Zoom interview. "And almost as often as a hotel, we would camp." They stayed at KOA campgrounds or in state and national parks camping areas, using borrowed gear from co-workers.

"She was the parent on the block that took me and several of my friends camping, bike riding, and hiking when the other parents were like, 'What are you doing? . . . OK, I'll never do that. But thank you. Burn off that energy!'" he said.

Asked why, he answered, "They were Black. You know?"

I do. But many people don't, so I asked him to clarify. "Sometimes," Thurston said," Black people have this complex relationship with the outdoors where it feels like slavery all over again. So we don't want no part of it."

From the "Green Book" to Buicks, PBS' "Driving While Black" examines the history of Black mobility

In truth, many Americans have a complex relationship with nature. There are self-described nature lovers who deny the existence of climate change. There are city dwellers who ignore the natural splendor that exists in their backyards or down the street.  And many splendid, awe-inspiring places are off the radar of most travelers.

The first season of "America Outdoors" journeys through six such spots, including Death Valley, the North Carolina coast, and places deep within Idaho, Minnesota, and Appalachia. Each is a relatively unsung gem connecting us with the larger natural and cultural histories of their regions and America at large.

In case high gas prices have you feeling slightly less adventurous, Thurston also provides an encouraging example of destinations to which people can walk, bike or bus in the next episode, "Los Angeles: It's a Vibe."

Thurston's enthusiasm about America's landscapes is infectious, which is the point of the show. By journeying into corners of America that are relatively off the beaten path, not merely as a host but as a Black man living in 2022 edition America, he's hoping to inspire folks to expand their horizons and reconnect to our nation's natural spaces, wholeheartedly and honestly.

Let's talk a little bit the places that you choose to feature. For instance, for the Pacific Northwest, I think it's wonderful that you choose Idaho because a lot of people would think you'd go someplace in Oregon or in Washington. In terms of cities, you talk about the nature within LA, which is spectacular. Can you talk about a little bit about the decision process, in terms of "We're going to go to these spaces as opposed to places like –"

Yeah, yeah. So much of this show was about showcasing the non-obvious. And I think we did that along every plane – in terms of the literal plane, like what land we would feature and what people, and what activities. So you just shake it all up. You can kayak on a river in Los Angeles? That's unique, that's a remix. You can whitewater raft in West Virginia with a paralyzed man? What?

"The show, basically, is the biggest mirror possible of the country."

You can harvest wild rice in Minnesota with the original inhabitants of the land. You can hike the Appalachian Trail with the woman who set the world record for speediest through-hike on the whole thing. And you can go surfing in LA with Black people.

We all were most excited to make an outdoor show that hadn't been made before, and that featured people in places doing things that we don't expect. The show, basically, is the biggest mirror possible of the country. I've commented that like I think of this as "America, comma, Outdoors," in that it is showcasing the diversity of the people and the diversity of the land. And we can support each other in that and be stronger for that, which is a much different message than I get primarily through most of my screen-based activities. It was awesome. It was healthy. For me, it was a really healthy choice to make this show and break some of my own media consumption and even media creation patterns.

Were there any parts of this that you walked into with any kind of thoughts or, or even trepidation, that ended up surprising you?

Almost everywhere, from multiple angles. I'll try to speed through a few examples. Starting right here at home in LA. I'm new to LA. I'm an East Coast person, I move fast. I expect density. I know what a river is. OK? I know what a river looks like. And when I came to LA and people started talking about the LA River. I'm like, "Y'all are as deluded as the fictional narratives you pump out of Hollywood. You need to chill."  Until I met George Wolfe, who took me out on the LA River to kayak, and I met Lino Jubilado, who took me out into the LA River to fly fish. Already: assumptions blown wide open. It is a river, it's proper, it's navigable. There's wildlife, there's fish, there's birds. And there are, you know, some shopping carts and a lot of underwear. But you know, wild things in wild spaces.

When I had my first fire summer here in 2020 – when everything was on fire across the country, but like, literally on fire here, I read these headlines about conscript prison labor being essential to surviving wildfire season. And the hourly wage, I'm pretty sure it was under $1. It was criminal wages for people we call criminals.

Well, I spent time in training with this brigade of formerly incarcerated, wildland firefighters and I ask them, basically, very loaded questions with militant voice inside my head: "My brother, what does it feel like to be exploited by [governor] Gavin Newsom?"

And each of them was like, "It was the best job I ever had in prison. We got to go outside, we got to leave the building. We got better food, we got to exercise like in the natural environment." And yeah, of course they wanted to be paid more. But they took an asset-based view of their limited circumstance. I still think we should pay them more, but I'm not so presumptuous in my opinions anymore.

Flip over to Idaho as a state. I'm spending time with this guy, Martin Black, who's a fifth-generation rancher. And he is super understated, very conservative – definitely, like, a Trump kind of guy – and so compassionate, and so generous with sharing his wisdom and his knowledge. Not just with me, because cameras are there, but he runs this intern program.

So my assumptions coming from a left angle, or a right angle, were all made more nuanced.

Last one I'll offer up as an example is national parks. I grew up exploiting these national parks, feeling born at a time when as a Black person, I could go and I was never made to feel unwelcome there. And I hadn't recognized the land theft involved in that – the fact that these national parks were an even more recent disrespect, treaty-breaking, act of displacement, in the name of preservation.

"There's history in nature for us. There's healing."

Meeting the people of Timbisha, which we call Death Valley, and really hearing firsthand from this 97-year-old elder, now 98, Pauline Esteves, about how the federal government forced these people out, tricked them into moving into these adobe houses where they migrated for the summer because it was mad hot. They then hosed them down with fire hoses – in my mind, the same fire hoses they hosed King and the Black Power movement, Black freedom struggle down with, and disappeared their homes. And then said, "Oh, you don't live here anymore. Now it's a national monument. Now it's a national park. Sorry, not sorry." This show just complicates all the stories that I've been told.

There's also something about being with the land that softens all of us. It softens me, it softens the guests, the cameras disappear. And we start to have these more human moments.

In 2020, a lot of reporters were interrogating Blackness in America, and one of the things that was talked about was road trips and exploring natural spaces. Along with that were stories about, for example, a couple who went out to a KOA campground and was greeted by the keeper with a [gun], telling them they couldn't go in.

We can be terrorized anywhere. That's part of how terrorism works. We were terrorized en masse out of the South – six million of us, one of the largest migrations in humans in this hemisphere, pretty recently. And we've been murdered in our homes, by police, by people who look like us. We can get killed at school. We can get shot playing in a park. We can get shot up in a Walmart. We can be in a the most patriotic, America-loving event, a Fourth of July parade, and get mowed down from a rooftop.

So there is technically no place that we can't be hurt. However, there are few places, I would say none, that compete with nature for the power to restore. And, you know, with respect to Walmart, the energy and the community and the connection that you can get from being with trees is much healthier for us than a place of commerce.

I'm very recently protected by cameras. But when I walk every day, ain't no crew around, and nobody knows who I am. I'm just a Black dude walking in the hills. And as Mosi Smith told me in the first episode, "Death Valley," I refuse to let the outside world dictate my joy. And there's so much joy to be had. There's so much healing to be had.

There's history in nature for us. There's healing. There are mental health benefits. There are emotional benefits. It's pretty obvious there's physical benefits.

So I get it's not always safe. People might approach you with a shotgun. Somebody might shoot at you; I heard that story too. But again, that can happen in other places that are far more detrimental to our health on a day-to-day basis, and an average moment in time, than in nature. We owe it to ourselves to reclaim that connection.

"America Outdoors with Baratunde Thurston" airs at 9 p.m.Tuesdays on PBS and can be streamed on the PBS app. Check your local listings.