Boris Johnson only wishes he were Donald Trump: But his comeback dreams won't come true 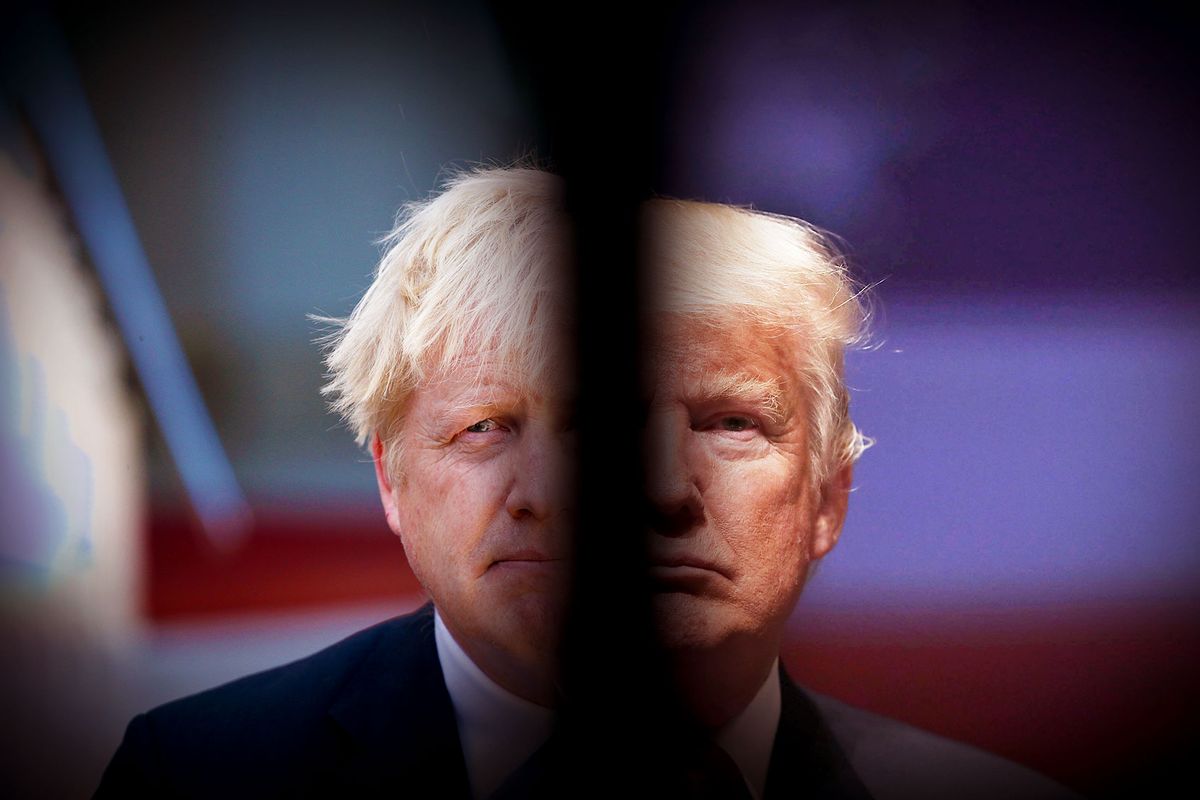 In a certain sense, you almost have to admire Boris Johnson. Please note: I said "almost." In his final appearance last week for the always-entertaining ritual performance of Prime Minister's Questions before the House of Commons (seriously, watch it sometime if you're inclined to believe the British are unfailingly polite), Johnson seemed exactly the same as ever — a mischievous, intelligent and unreliable schoolboy, overstuffed with expensive chocolates, entirely unrepentant and largely upbeat — only days after having been driven to resign by his own party in one of the most humiliating political collapses of recent history.

And from his blasé, Oxbridge, upper-class-wag, profoundly narcissistic point of view, why not? What Johnson told the honorable members in Westminster was pretty much true (which is a point to keep in mind as we go on): He had conquered the dominant political party in Britain and re-engineered it, pulling in large numbers of working-class voters in the north of England for the first time and leading the Tories (i.e., the Conservative Party) to their largest electoral majority since the days of Margaret Thatcher. He had accomplished the seemingly impossible and quite likely undesirable task of extracting the U.K. from the European Union (i.e., Brexit), something his own party hadn't previously much wanted to happen.

So what the hell happened to Boris Johnson — and can it happen to Donald Trump?

Johnson's unasked and unanswered question during that performance was obvious to all: Given how awesome I am and how much I have accomplished in just three years, why in the name of Sweeney Todd are you chucking me out? He ended on a simultaneously ludicrous and threatening note that even his worst enemies would have to admit was vintage Johnson, winding up his peroration to the House with: "Mission largely accomplished — for now. Hasta la vista, baby!"

Let me revert for a moment to resisting the impulse to admire someone possessed of enough thoroughly unearned self-confidence to quote George W. Bush and the Terminator in a single soundbite. Whew! Let's move on: Whatever effect Johnson was looking for, he got it. Within hours, even respectable media outlets like the BBC, the Guardian and the Wall Street Journal felt compelled to follow the lead of the right-wing London tabloids and game out scenarios for Johnson's immediate or eventual comeback, while admitting, almost in passing, that under Britain's parliamentary system that outcome was somewhere between wildly unlikely and completely impossible.

One right-wing tabloid promised a "shock poll" revealing that 85% wanted Johnson to stay on as prime minister. It was a poll of the tabloid's online readers.

On the website for the Express, probably the British daily that most reliably represents pro-Boris working-class Tory voters, the top three stories on Saturday evening (and four of the top five) were all variations on the theme of "Boris Johnson's incredible comeback," as one nearly substance-free article breathlessly put it. (It comprised 16 sentences of prose, several of them cribbed from earlier coverage, spread among six or seven photographs of Johnson.)

Another Express article promised a "shock poll" of Johnson's popularity, finding that "85% still want him as PM." Which would indeed have been a shock if it hadn't been an online poll of angry people reading Boris Johnson content on Express.co.uk, rendering it about as rigorous as a poll of hungry foxes asking whether they prefer live chicken or cold tofu — or, rather more to the point, a poll of Fox News viewers asking them to choose between a Donald Trump dictatorship and a seven-hour lecture on veganism delivered with painstaking attention to gender pronouns.

Several of these articles, at the Express and elsewhere, have quoted outraged Johnson supporters (largely unnamed) describing the parliamentary infighting that drove him from power as a "coup" or a form of "impeachment," and observing that the entire process of ousting and replacing Johnson was undemocratic. First of all, those terms were imported piecemeal, and without much attention to detail, from contemporary American discourse, which is something of a tell.

Second of all, there's some justice to those observations, to be fair. But you have to wonder what country those people thought they were living in, and whether they believe they get to change the system just by whining about it. (And, goodness gracious, wherever would they have gotten such an idea?)

Sometimes British prime ministers are removed from power through elections, to be sure. But at least as often it happens through an intra-party coup or a process approximately similar to impeachment, and especially so within the Conservative Party. (The Tories haven't lost a national election since 2005, but have gone through plenty of internal drama during that time.) That's exactly what happened to Johnson's two predecessors, Theresa May and David Cameron. That's what happened to Maggie Thatcher in 1990. It's pretty much what happened to the most revered Tory PM of all, Winston Churchill, who was forced to "retire," not altogether voluntarily, in 1955.

It's hardly a secret that the British parliamentary system is at best an indirect form of democracy, and that the prime minister is not elected by the voters at large. He or she is leader of the party that controls a majority in Parliament, and until recently was chosen by the other elected members of Parliament from that party, with zero public input.

While both the Tories and the center-left Labour Party have "democratized" that process lately, both have been eager to avoid anything resembling the chaotic scramble of the American primary system. Johnson's replacement as Tory leader (and, in effect, prime minister) will be chosen by an electorate of roughly 160,000 registered members of the Conservative Party — or about 0.3% of all U.K. voters — but only after the party's MPs have whittled a field of eight or so contenders down to two finalists.

Boris Johnson, as noted in the headline above, would love to be more like Donald Trump. His shit-stirring suggestion that he may try to stage a comeback, before he's actually left, may be the most overtly Trumpy thing he's ever done. (He remains prime minister for the moment, and apparently will not resign until the new party leader takes over in early September.) But for better or worse, both British politics and British culture — including the enduring cultural politics of the supposedly-abolished class system — sharply limit the possibilities of balls-to-the-wall Trumpiness.

Johnson would love to have a Trump-scale cult of personality behind him backing everything he does — but a week's worth of clip-job articles in the right-wing press won't get that done. He'd love to be able to terrorize leading figures in his own party into silent acquiescence with the threat of political doom, even though they not-so-secretly hate his guts — but in fact his collapse came because dozens of prominent Tories decided he was a political liability and flung him to the curb. As noted above, Johnson's final address to Commons was not full of blatant or outrageous lies — and in fact the numerous falsehoods that got him into trouble as PM have been of the penny-ante, prevaricating variety, and would barely even register on the Trump scale.

Johnson's speech clearly implied that his fellow Conservatives had made a dreadful mistake in driving him from power, and the mini-bubble of "comeback" stories are no doubt meant as a trial balloon toward undoing that decision. To the extent that the left-behind Johnson supporters offer any sort of coherent narrative, it goes like this:

In the leadership election that's about to happen, his fans throw themselves behind Foreign Minister Liz Truss, a political chameleon and more or less a Johnson loyalist, over former Chancellor of the Exchequer Rishi Sunak, who despite his South Asian background is pretty much a dyed-in-the-wool tax-cutting conservative with a Stanford MBA and a Goldman Sachs pedigree. In a year or so, Truss bows out or flames out or loses an election, and the chastened Tories, yielding to the public outcry for more Boris, return to the embrace of their dishonorable schoolboy.

Johnson can't claim that his political downfall was fake news and didn't really happen. And he doesn't need to claim that he fell victim to a conspiracy of backstabbers, since everyone knows that's what happened.

There are about 11 reasons why that won't happen, starting with the fact that there will be a British general election in 2024 (if not earlier), and almost no one believes that a party led by Boris Johnson could conceivably win it. But even the fact that such a scenario lingers somewhere on the outer margins of plausibility, and that Johnson and his supporters dare to dream of short-circuiting the established political process by way of a popular uprising, speaks to the global legacy of Donald John Trump.

But Boris Johnson isn't Donald Trump, and really can't be — and this is a moment where the general historical parallels between postwar British and American politics begin to break down. For all his mendacity, vulgarity and hunger for power, Johnson is a consummate insider, an upper-class populist of a sort stereotypically familiar to the British public. After he leaves office, he'll be back at the bar at whichever exclusive London club he belongs to, cheerfully drinking excellent sherry with former allies and former foes and well positioned to make major bank in the private sector.

Johnson cannot claim that his political downfall is fake news and didn't really happen, only that it was a bad idea. He doesn't need to claim that he was the victim of a conspiracy of backstabbing traitors, since that's how the system works, and everyone understands that's exactly what happened.

I'm not here, trust me, to deliver some anguished Anglophile cri de coeur about how at least the guardrails of democracy held up in Blighty and in the end the Conservatives showed they had some principles and, gosh, maybe we'd be better off with a parliamentary system. That's not even remotely what happened: The Tories stood with Boris Johnson, giving him everything he wanted and ignoring his lies and ethical failings, right up to the moment they decided he was a loser.

If Boris and his dead-end allies dream of terraforming an American-style system, in which a political party can be swamped by mob sentiment, a whole lot of prominent Republicans in the U.S. would love to import the British system, in which a party leader who's gone sour — and who won't shut up about how he didn't really lose the last election, just for instance — can be junked without risking a massive primary rebellion.

I'm not sure that I would trade the American political system, compromised and paralytic as it currently is, for a constitutional monarchy with, um, no actual constitution and a distant-cousin relationship to actual democracy. But that's not the point, and neither of our nations is in a position to point fingers at the other one just at present.

There is, in the end, a continuing if approximate kinship: Boris Johnson's downfall represents roughly the same kind of conditional victory for democracy as Donald Trump's electoral defeat. Both men yearn for doubtful comebacks that remain, for the moment, out of reach — but the larger question of whether the tendency toward autocracy that both men represent can be defeated will not be answered anytime soon.

about Boris Johnson and U.K. politics