Scientists think COVID-19 originated at a Wuhan "wet market." Here's what that means

SARS, COVID-19 and Ebola all originated in "the most dangerous types of wet market," one researcher says 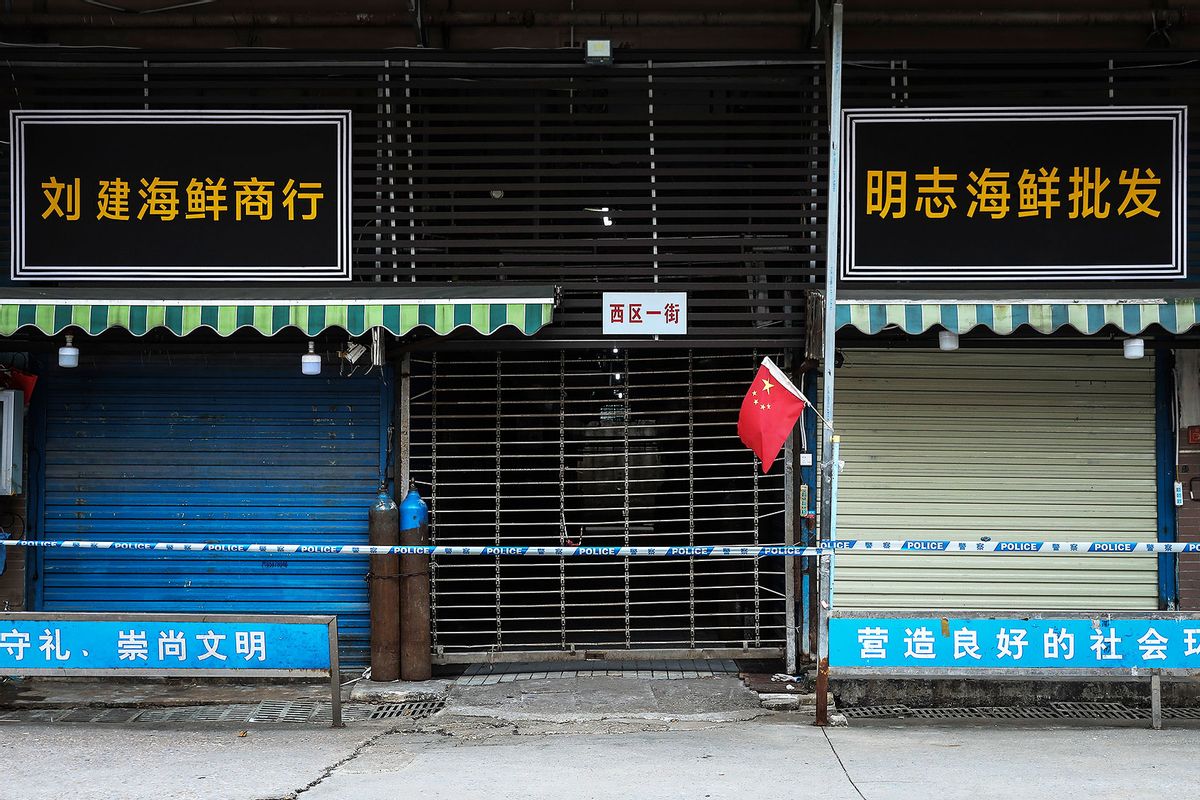 A general view of the closed Huanan Seafood Wholesale Market, which has been linked to cases of Coronavirus, on January 17, 2020 in Wuhan, China. (Getty Images/Stringer)
--

Last year, Peter Daszak, a member of a World Health Organization (WHO) investigative team that looked into the origins of the COVID-19 pandemic, told NPR that he believed the outbreak most likely began at a southern Chinese wildlife farm. Now, a recent research article in Science Magazine has confirmed a long-suspected theory — more specifically, that "the emergence of SARS-CoV-2 occurred via the live wildlife trade in China." Specifically, researchers show that the Huanan Seafood Wholesale Market in Wuhan, China was the "epicenter" of the COVID-19 pandemic, meaning where the virus crossed over from animal to human.

Globalization, poverty and the exotic pet trade often send humans to natural places where they have interaction with wildlife that humans might not encounter otherwise, increasing the risk of zoonotic disease — meaning transmitted from animal to human. And curiously, the Huanan market wasn't the first of its kind to help spur a pandemic.

To more effectively illustrate exactly which types of wet markets pose a threat, Lin suggested people think of them in terms of "a nested progression of risk."

"The least risky markets are those selling only dead and domesticated animals (very low chance of pandemics emanating from here)," Lin told Salon.

"I was not surprised that COVID-19 originated in an animal market," Stanley Perlman, MD, Ph.D., a professor of microbiology and immunology at the University of Iowa told Salon by email. "SARS began in a similar market. Animals carry many viruses that can cross species to infect humans and markets provide an easy way for transmission to occur. The Science study is really elegant and makes a lab leak as the source for the virus much less likely."

Indeed, Perlman and other researchers typically see markets like these as likely originators of future pandemics that could again encircle the Earth. By their very nature, wet markets in which merchants do not take proper hygiene precautions are tailored to produce zoonotic diseases.

As these types of live-animal markets are uncommon in the United States — depending on how strict your definition is, there are thought to be just a few hundred in the U.S. —  it's natural to ask what these markets are like, just how many of them there are, and if they're all truly risk sources for zoonotic disease.

Experts with whom Salon spoke emphasized that there is tremendous variation in what wet markets look like, and that by some definitions, even American farmer's markets would qualify. However, some present a far greater risk of spreading zoonotic disease than others.

President Biden has COVID-19 — but experts say it's unlikely to be a bad case. Here's why

Bing Lin, a third-year Ph.D. student under Dr. David Wilcove in the Program in Science, Technology, and Environmental Policy at Princeton University, urged against castigating all wet markets. Many, he says, are safer in terms of the risk for zoonotic disease transmission.

"It's hard to give a quantitative estimate, but if you're referring to wet markets as those selling 'consumption-oriented, perishable goods in a non-supermarket setting,' they remain the predominant source of food for millions of people in East and Southeast Asia, Africa (more commonly referred to as public markets there), and even in Europe and the US (farmer's markets)," Lin explained. "Most importantly, wet markets aren't created equal and are differentiable based on whether live and wild animals are sold alongside produce and dead/domesticated animals."

"On the other end of the spectrum, there are wet markets selling live and wild animals, which have very high zoonotic transmission risk. But these constitute a vast minority of wet markets."

To more effectively illustrate exactly which types of wet markets pose a threat, Lin suggested people think of them in terms of "a nested progression of risk."

"The least risky markets are those selling only dead and domesticated animals (very low chance of pandemics emanating from here)," Lin told Salon. "This is also what most wet markets are like. Then, on the other end of the spectrum, there are wet markets selling live and wild animals, which have very high zoonotic transmission risk. But these constitute a vast minority of wet markets."

When it comes to pandemics with a zoonotic origin, Lin observed, scientists and others with an eye toward the public welfare have been issuing warnings for a long time.

"Scientists (e.g., Peter Daszak of the Eco-Health alliance) and prescient members of the public (e.g. Bill Gates and David Quammen) have been predicting a pandemic outbreak for decades," Lin explained. "SARS in 2003 was a big wake up call for many, so it really was not a surprise. Also, there have been many zoonotic diseases that have arisen from the most dangerous types of wet markets, including severe acute respiratory syndrome [SARS], Ebola Virus Disease, monkeypox, Nipah virus, and now COVID-19."

Speaking to NPR last year, Daszak elaborated on exactly what types of wet markets should be avoided — and these are very different from the vast majority of wet markets from which people derive food.

"They take exotic animals, like civets, porcupines, pangolins, raccoon dogs and bamboo rats, and they breed them in captivity," Daszak, who works for EcoHealth Alliance as a disease ecologist, had explained.