COVID-positive Biden experiences a Paxlovid "rebound." Doctors still aren't sure why they happen

After taking Paxlovid, Biden tested negative for several days, then positive. He's not the only one 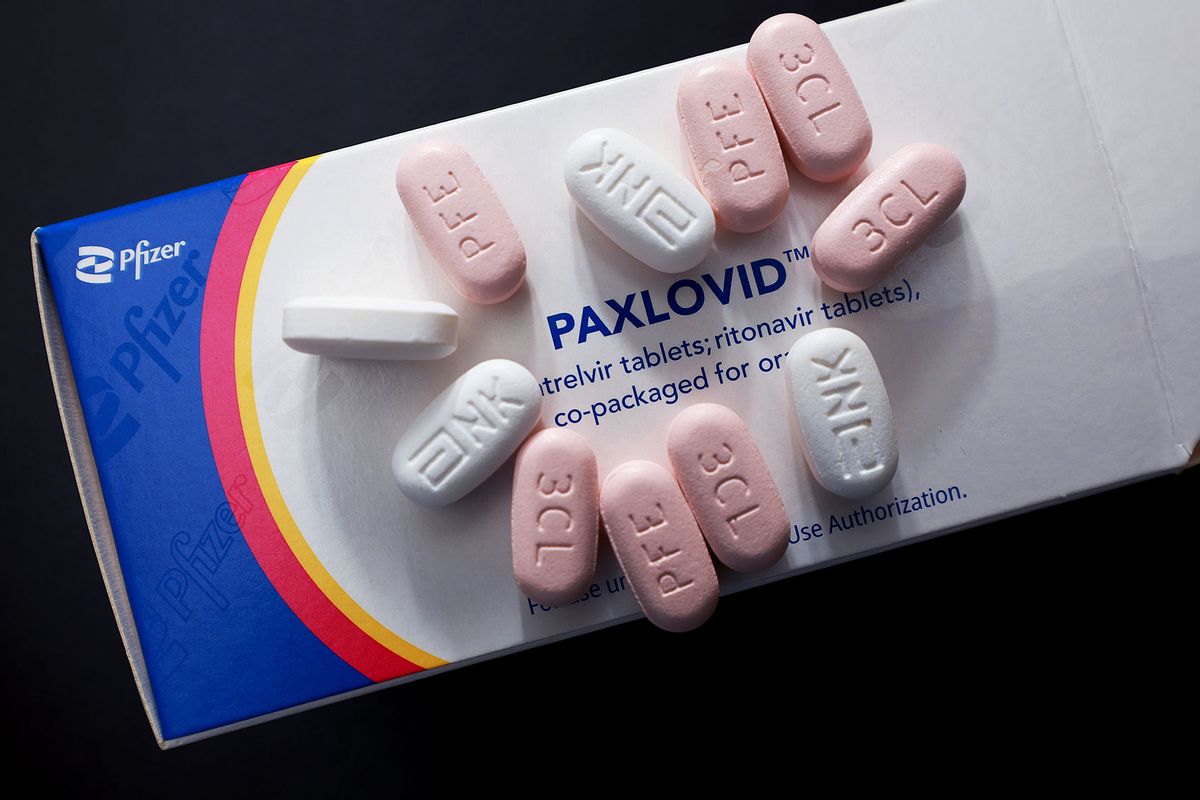 Pfizer's Paxlovid is displayed on July 07, 2022 in Pembroke Pines, Florida. The US Food and Drug Administration revised the emergency use authorization for Paxlovid, Pfizer's Covid-19 antiviral treatment, to allow state-licensed pharmacists to prescribe the treatment to people. (Joe Raedle/Getty Images)
--

President Joe Biden isn't in the clear with COVID just yet. After testing negative for COVID-19 last week, press secretary Karine Jean-Pierre said in a memo on Monday that Biden's latest antigen test was still positive. That means that Biden tested positive — again — after a period of testing negative. While President Biden has reportedly not experienced a re-emergence of symptoms, he is still presumed to be contagious and will be working remotely.

The unusual results pattern doesn't mean that Biden experiencing an immediate reinfection. Rather, Biden has become yet another victims of what is sometimes called a "Paxlovid rebound."

Biden certainly isn't the only one. The neologism entered popular discourse because it is a common thing that happens after taking Paxlovid: A period of vigor, in which the patient tests negative and/or sees a drastic reduction in COVID symptoms; followed by a relapse in which they test positive once again.

Though the phenomenon is well-known, researchers, public health experts and infectious disease doctors are puzzled as to why it's happening — though they do say it might not be a unique feature of Paxlovid.

Don't pull a Biden and work while sick

"I think that rebound probably occurs in people who don't get treated with antivirals, but it seems to be more common in people who have," Dr. Michael Charness, Chief of Staff of the Veterans Administration Medical Center in Boston who co-authored a preprint paper on rebound cases, told Salon. "But the 'why' is still somewhat mysterious."

As Salon has previously reported, Paxlovid is actually not one drug, but two generic medications — nirmatrelvir and ritonavir — that are packaged together. The Food and Drug Administration (FDA) granted emergency use authorization of Paxlovid in December 2021 for anyone ages 12 and older who weighs at least 88 pounds. The oral antiviral pills can be taken at home to help keep people who are high-risk for severe disease from getting so sick from COVID-19 that they need to be hospitalized. It has been said to be a game-changer COVID treatments, and it works by interfering with the way the virus processes proteins.

In one clinical trial conducted in unvaccinated individuals in the second half of 2021, the Pfizer-developed drug was found to lower the risk of hospitalization and death by 89 percent compared to a placebo group, without evident safety concerns. Unlike some cold and flu drugs used to treat COVID, Paxlovid is not an over-the-counter medication: you need a prescription from your physician to access it.

"We've observed this in our own health care system, but I think what we believe also in what the literature seems to be suggesting is that people rebound more frequently when they've had antiviral treatment," Charness told Salon. Charness noted that the trials took place when the delta variant was dominant, raising the question as to whether the omicron subvariants are playing a role.

Charness said there is one school of thought that posits that one's immune system needs to have a "certain exposure to the virus" to ramp up an effective immune response.

"So some people have speculated that because the antivirals work so well and clear the virus initially, the immune system doesn't get as good a look at it, as it might in a person who doesn't get treated.... [so it takes] longer for the immune response to ramp up and for the virus to be eventually cleared."

"People who have rebound, even though they're well outside the period for isolation, may be contagious again — and accordingly, the CDC has recommended that people restart their isolation clock if they experience a rebound."

A separate study published in Clinical Infectious Diseases suggested rebound symptoms could have to do with an "insufficient" exposure to the drug.

"Our main concern was that the coronavirus might be developing resistance to Paxlovid, so to find that was not the case was a huge relief," said author Aaron F. Carlin, MD, PhD, assistant professor at UC San Diego School of Medicine, in a press release. Rather, the researchers suspect that not enough of the drug was getting to the infected cells to stop the virus from replicating.

Still, this remains speculation. In Charness' recent study, which has yet to be peer-reviewed, he and his colleagues looked into rebound cases and found that patients are still likely contagious when reinfection occurs, bringing to light one of the dangers of a rebound case. For example, in one case noted in the study, a 67-year-old man transmitted the coronavirus to a 6-month-old after spending nearly 30 minutes near the child.

"People who rebound, their viral loads can be quite high and there's evidence now in the literature that you can culture [the] viruses from people who have rebound — and there are also suggestions that people can transmit during rebound," Charness said. "People who have rebound, even though they're well outside the period for isolation, may be contagious again — and accordingly, the CDC has recommended that people restart their isolation clock if they experience a rebound."

This is likely why some people, including Biden, move from testing positive to negative to positive again.

Charness added that rebound cases don't appear to be a significant risk to the patient themselves.

"For most individuals, it doesn't appear that rebound poses a significant risk for hospitalization, or more severe consequences of COVID-19," Charness said.

For 79-year-old Biden, who is considered high risk due to his age — this is good news.