"I hope that in your ruling that it doesn't end my life here," Griner said prior to sentencing 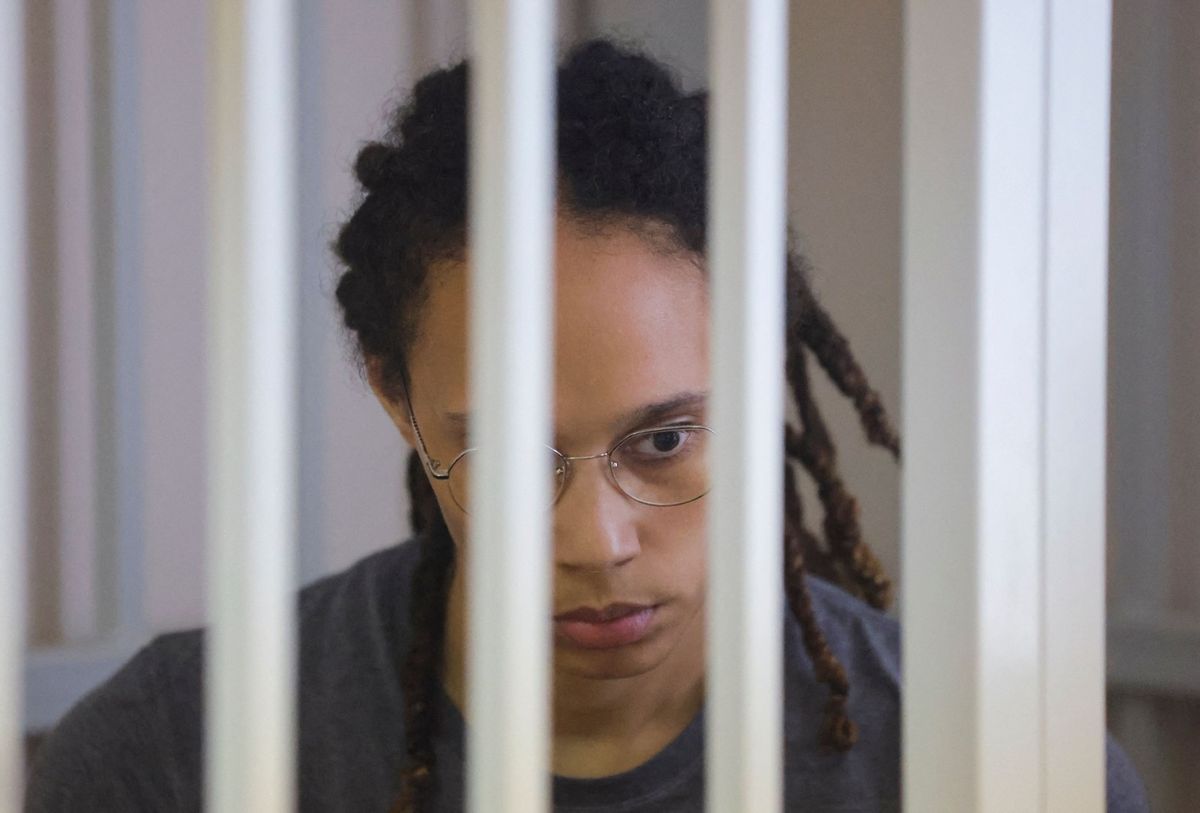 WNBA basketball player Brittney Griner waits for verdict inside a defendants' cage during a hearing in Khimki outside Moscow, on August 4, 2022. (EVGENIA NOVOZHENINA/POOL/AFP via Getty Images)
--

Brittney Griner, a basketball player for the W.N.B.A. team The Phoenix Mercury, was sentenced to 9 years in a Russian penal colony after being found guilty of drug smuggling and possession charges. This sentencing comes nearly six months after Griner was detained at Sheremetyevo International Airport near Moscow where several cannabis vape cartridges were found amongst her belongings. Griner had traveled to Russia to compete with UMMC Ekaterinburg, a Russian women's basketball team she'd been part of for the last seven years during her W.N.B.A off-season.

In NPR coverage of Griner's sentencing they make clear that Russia has a conviction rate of 99% in their criminal courts, yet the judge's ruling still registered as a shock to many weighing in on her sentencing via social media. For others, like Fox News commentator Tomi Lahren, the 9 year sentence registered as something else.

"Brittney Griner is a cautionary tale. Hate America? Think it's oppressive? Go to another country, play stupid games and find out what oppression and "No justice" looks like," says Lahren on Twitter. "Too bad too sad."

"It seems like the Russians are doing to Griner what the Biden administration is doing to non-violent January 6 protesters," Dinesh D'Souza said, in a similar frame of mind as Lahren. "Hard for us to feign indignation when the same thing is going on here!"

In a statement issued by President Joe Biden following Griner's sentencing on Wednesday, he calls Russia's detainment of the star athlete "unacceptable."

"Today, American citizen Brittney Griner received a prison sentence that is one more reminder of what the world already knew: Russia is wrongfully detaining Brittney," Biden says at the start of his full statement. "It's unacceptable, and I call on Russia to release her immediately so she can be with her wife, loved ones, friends, and teammates. My administration will continue to work tirelessly and pursue every possible avenue to bring Brittney and Paul Whelan home safely as soon as possible."

Former U.S. Marine Paul Whelan is currently being held in Russia under suspicion of espionage, with the United States attempting to make a deal for his freedom, as well as Griner's, in exchange for handing over convicted arms dealer Viktor Bout.

"We've made a serious proposal, made a serious offer, and we urge the Russians to take that offer because it was done with sincerity and we know we can back it up," White House national security spokesman John Kirby told reporters during a briefing Tuesday, as reported on by The Hill. In that same report, a quote from Whelan sheds further light on what the next steps may be in terms of his possible exchange, as well as Griner's.

"My assumption is … that it will be many months yet before we see any sort of outcome," Whelan said in a phone interview reported on by The Hill. "I don't know that the discussions will even start until after Ms. Griner's case has been resolved."

In NPR's coverage of Griner's sentencing they highlight that "the basketball star was prescribed medical marijuana by a U.S. doctor to treat chronic pain in the offseason — and still had never failed a drug test."

"What does this show?" said defense counsel Maria Blagovolina. "It shows that Brittney Griner used marijuana only at home and only in very small doses and that she had no intention to bring the substance into Russia."

In earlier coverage by NPR they state that Griner admitted to "bringing cannabis into the country" but that she'd "packed in a hurry and did not intend to break the law."

"Brittney Griner has been convicted and sentenced to 9 years in prison for bringing into Russia two cartridges of cannabis oil," says Barb McQuade, legal analyst for NBC News and former US Attorney. "Russia is not our friend. It is a hostile foreign adversary preying on an innocent person as a political pawn as trade bait for a prisoner exchange."

"Americans *should* be outraged that Russia sentenced Brittney Griner to 9 years in prison for a non-violent cannabis charge, echos Former Ohio State Senator, Nina Turner. "We should all speak out *and* reflect on the fact that many Black and brown Americans face similar sentences here."