Enter "Sandman," right on time for us to relate to his plight 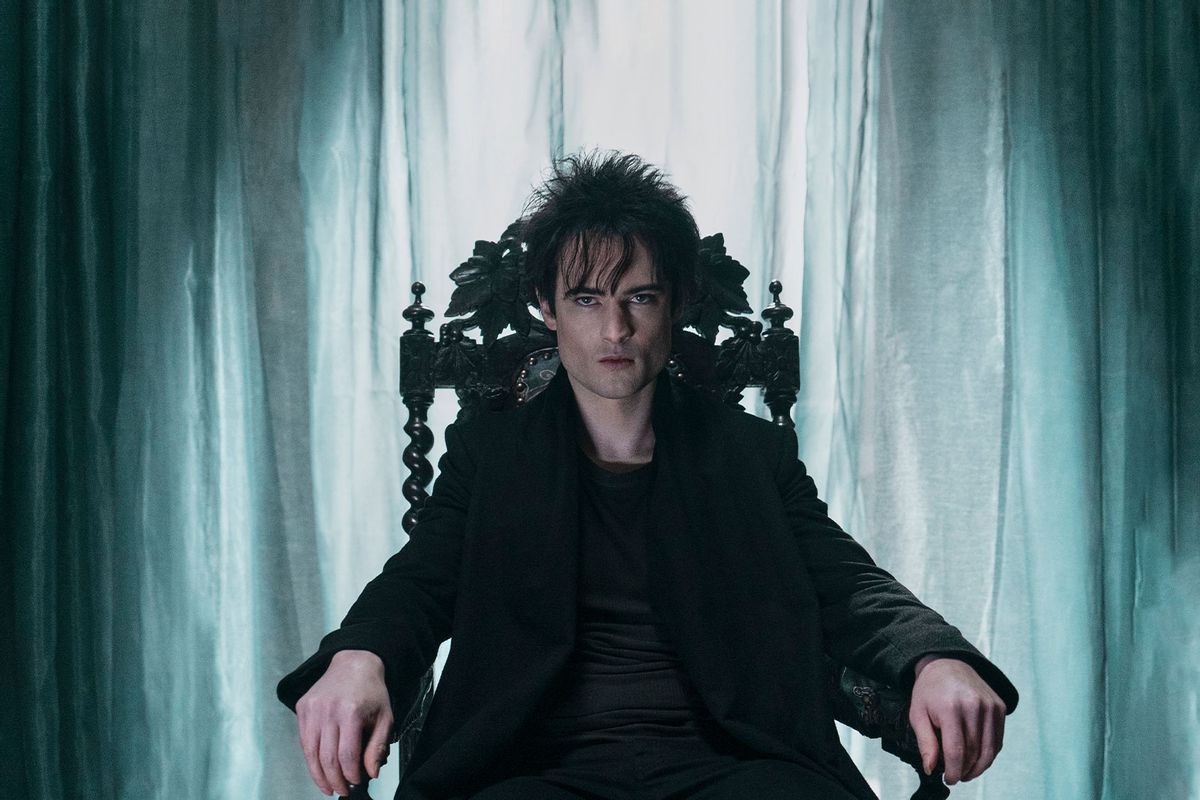 Tom Sturridge as Dream in "The Sandman" (Liam Daniel/Netflix)
--

It's both odd and poetic to realize the town nicknamed the Dream Factory almost became the place that buried The Dreaming. But this is an aspect of the lore attached to "The Sandman," Neil Gaiman's lyrical masterpiece: it spent years trapped in the agonizing plane know as Development Hell.

If you know the story, it's easy to see why that's happened. "The Sandman" lacks a supervillain to rally the audience against, a necessary component in every superhero that's been cranked out since Christopher Reeves played Superman. If that 1978 movie established what theatrical adaptations of comic books are supposed to look and feel like, Gaiman's Master of Dreams never stood a chance.

Dream, also known as Morpheus, Oneiros and The Sandman, among many other sobriquets (Tom Sturridge), doesn't fit the mold of the standard superhero.

He is one of a group of siblings known as The Endless, immortals that have existed since the first sentient lifeforms emerged from the void. In the first season we meet his siblings Death (Kirby Howell-Baptiste), Desire (Mason Alexander Park) and Despair (Donna Preston). But there are others, including Destiny and Delirium.

The Endless are not a close-knit unit. In fact, some of Dream's siblings would love to destroy or dethrone him. Regardless, he never indulges in physical violence. He's largely unconcerned with common definitions of good or evil and he's not a muscle-bound giant.

Rather, his dominion is the human subconscious, and his duty is to reinforce the boundary between The Dreaming and our reality.

The magic inside Gaiman's "Good Omens"

If you believe in fate, perhaps the decades-long delay to bring "The Sandman" from page to screen was meant to be. Television and our tastes have evolved in ways that make us better able to appreciate Gaiman's fable in terms of its artistry and its adventurous plot progression.

"The Sandman," which Gaiman developed and executive produces alongside David S. Goyer and showrunner Allan Heinberg, follows the main rules of TV dramas while stretching others. Like Dream does in the graphic novel, its hero leaps across time and skips between realms and, at least once, wears a different face. Much of the inaugural season is devoted to layered character establishment and world-building.

Television and our tastes have evolved in ways that make us better able to appreciate Gaiman's fable .

Inadvertently, however, the crime that launches Dream's introductory adventure lands differently today than it did three decades ago.  In the late '80s and early '90s Dream was a goth kid mascot that resembled The Cure's lead singer Robert Smith.

Sturridge is about as physically close to that original sketch as one can picture. Thirty years ago, Dream was distinguished by his emotional distance and coolness. Today, in this age of scams and thefts, he's simply another guy minding his own business when his existence is irrevocably transformed by a criminal he never saw coming.

"The Sandman" sticks closely to the original plot of the first two graphic novels, "Preludes and Nocturnes" and "The Doll's House," starting with Dream's accidental capture and imprisonment by a con artist and magician named Roderick Burgess (Charles Dance). 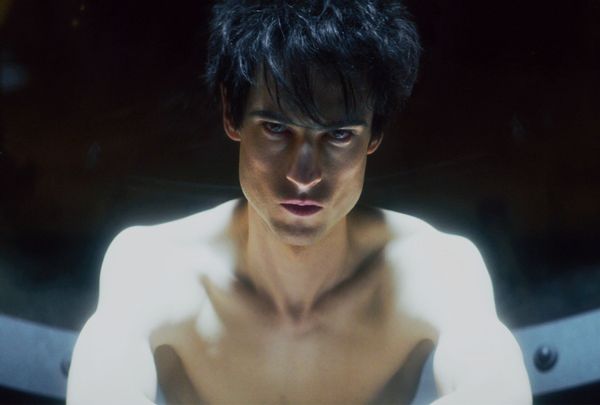 Tom Sturridge as Dream in "The Sandman" (Netflix)

Decades ago, my immature first reading of this moment viewed Dream's ordeal as simply the inciting incident in an epic odyssey that's equal parts head trip and road trip. Reconsidering the page today may yield a different reading, but seeing it onscreen leaves little ambivalence as to the fact that we're witnessing an extreme violation.

Burgess originally intended to capture Death but when Dream materializes instead, unconscious and helpless, the "magus" decides he'll do just fine. Burgess steals Dream's sigils of power – his bag of sand, a flawless ruby, and his helmet, the equivalent of his crown – and keeps the Master of Dreams trapped inside of a glass bubble for more than a century.

The magician uses Dream's tools to become wildly wealthy and influential as the rest of the world suffers. Some people never wake up. Others lose their sanity because they can't sleep. Burgess and his followers don't care, since it doesn't affect their never-ending party.

In the comic books, Dream seethes at the fact he, an omnipotent deity, was trapped by a charlatan's cheap spell. Today, too many of us can relate to that feeling; lamenting that we should be smarter than this is a common refrain in the era of rampant conspiracy theory and sophisticated grifts. However, Gaiman doesn't allow Dream's imprisonment to harden him.

Once he escapes, he sets about finding his possessions and repairing The Dreaming, which has decayed in his absence. Gaiman allows Dream to triumph using his superior wisdom and ingenuity, even when facing Lucifer (Gwendoline Christie) in her domain. All the while he confronts who he is to the universe and contemplate the possibility that even the worst of us can change for the better.

Where he could seek revenge he chooses restoration instead, using what he regains to rebuild his universe.

That isn't necessarily a glorious choice, since the season's second half introduces a threat to The Dreaming personified by Rose Walker (Vanesu Samunyai). Rose is a kind, determined young woman who simply wants to find her brother she had to leave behind when their parents divorced. Without wanting or meaning to do so, she also has the power to annihilate existence.

"The Sandman" is a story about the power of stories, especially the ones we tell ourselves.

Dream sees little in common with Rose because he's struggling to come to terms with his vulnerability, exposed by Burgess and embittered by the fact that none of his all-powerful siblings made an effort to rescue him. But Rose and her younger sibling are also survivors, like Dream. Instead of walling herself off from others, she expands her connections to others.

"The Sandman" is a story about the power of stories, especially the ones we tell ourselves. Dream is the weaver of delights and the originator of nightmares, the entity charged with bringing solace to humans and challenging them to confront their fears. But he's also convinced himself of truths that no longer fit him or were never accurate in the first place. 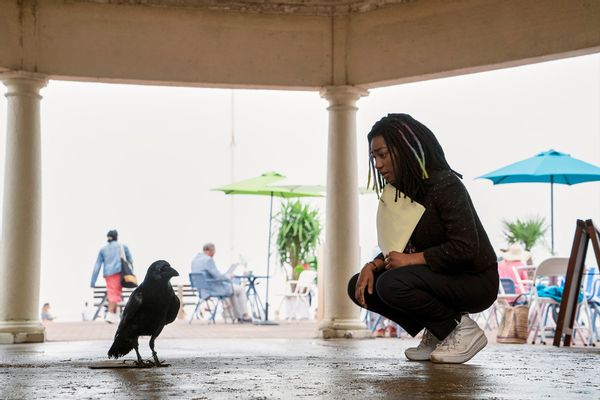 The narrative engine of "The Sandman" is fueled Gaiman's examination of mythmaking in the modern age. At the time of the graphic novel's publication, that meant the late 1980s.

Mythmaking has a different connotation in 2022, although Gaiman may refute that notion. After all, his creations are interpretations of the ways we define words and terms. Myths can be benign, creative explanations of traditions or beliefs, or they can be malevolent lies presented as dangerous truths.

Sturridge's Dream believes his world is a balm or a wellspring of artistic inspiration. Nevertheless, in the wrong hands – human hands – his power eats people alive or causes them to cannibalize one another.

The Dreaming, when neglected or attacked, can crack apart, damaging it along with our reality. And the direst threats to it involve figures claiming not to care about how their actions on one side affect the other.

For all of the difficulty surrounding the long journey of "The Sandman" from lush illustration to live action reality, there has always been something about the story that drew people in. If more of us are familiar with the tale than even a few year ago, credit the mainstream anointing of two of its tangential characters.

John Constantine, for example, pre-dates "The Sandman." Alan Moore introduced the warlock detective in a 1985 issue of "The Swamp Thing," but he showed up in Gaiman's universe within the first couple of issues. In any case, it was Constantine, not Dream, who inspired a 2005 movie starring Keanu Reeves and a short-lived NBC series in 2014 that Goyer had a hand in developing.

The 2016 Fox/Netflix fantasy "Lucifer" also links to the "Sandman" universe and managed to live through six seasons. But its creators only kept remnants of the author's initial portrrait, placing the fallen angel inside of a case-of-the-week procedural with a subplot depicting his struggle to figure out where he fit in God's plan.

"The Sandman" also presents mysteries to unravel, but its scope is too broad to fit in a case file. Helpfully, Dream's weakness looks much like our own: he's convinced that he's all-knowing, doesn't need anyone and cannot possibly change.

But the violence Burgess did to his ego did change him; his subjects and his sister Death remind him of that. When he embraces that fact, we see his heroism shine through. Not long ago, a few Hollywood executives with limited imagination decided such a conceptual premise could not be filmed.

That was before an era when many things we never could have conceived of happening have come to pass, for better or much worse. The Dreaming, as it is lushly in this series, is a lovely escape. But it's also a fantasy with an honest core, showing that even the boldest beings in the universe can be undone by petty men.

All 10 episodes of "The Sandman" are currently streaming on Netflix.