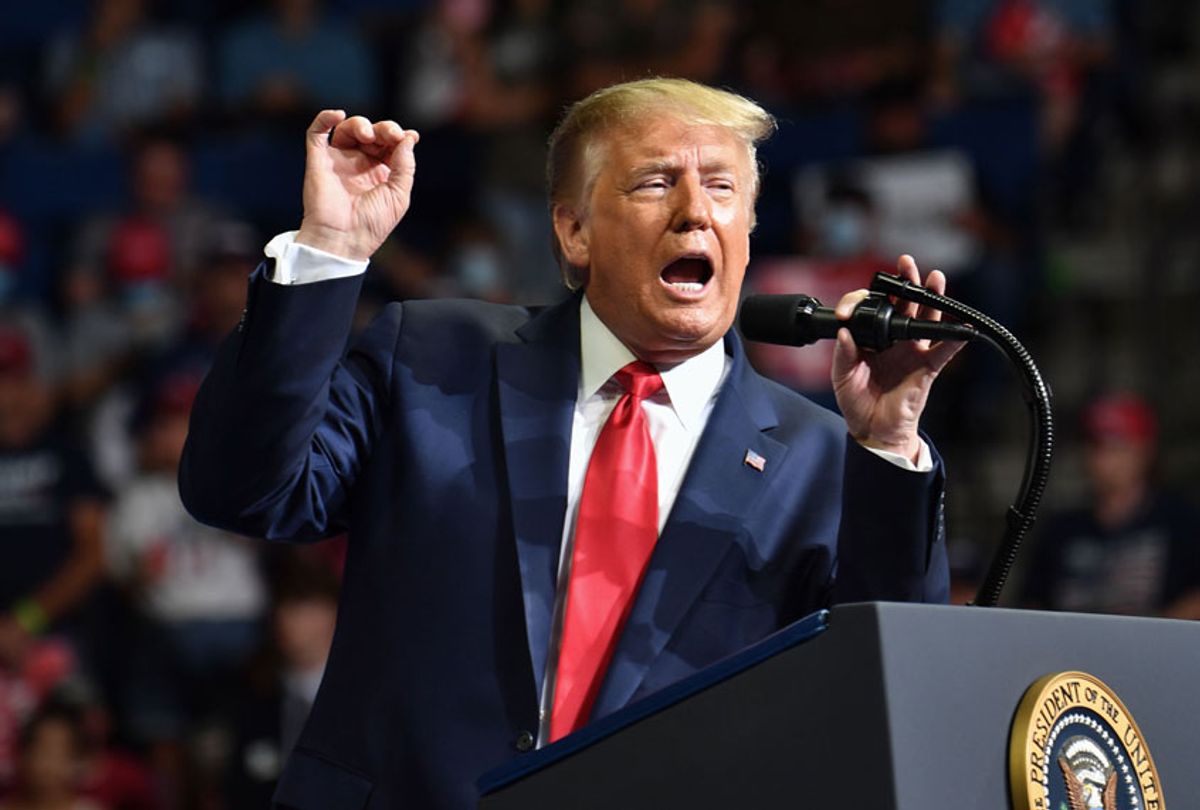 US President Donald Trump speaks during a campaign rally at the BOK Center on June 20, 2020 in Tulsa, Oklahoma. (NICHOLAS KAMM/AFP via Getty Images)
--

Over the course of the January 6 committee hearings earlier this summer, Donald Trump defenders churned through a number of defenses, each less plausible than the last. The committee then sliced through them all. They dispelled not just the sillier claims, such as Rep. Marjorie Taylor Greene, R-Ga., blaming the Capitol insurrection on "antifa" or Fox News host Tucker Carlson blaming imaginary FBI instigators, but they also dismantled some of the more robust, though still unlikely, defenses. Trump, his defenders argued, somehow didn't know what the rioters were going to do and the siege was organized without his knowledge, etc. Eventually, Trump defenders landed on the "too stupid to know better" defense, arguing that Trump just really believes the Big Lie.

Yes, they were defending him by arguing he's delusional. The idea is that they could claim Trump's innocence by framing him as befuddled enough to sincerely believe he was defending, instead of trying to overthrow, democracy. Setting aside the question of whether it's wise to support the presidential aspirations of someone so deluded, the members of the January 6 committee rejected the "too stupid to know better" defense. On July 12, Rep. Liz Cheney, R-Wyo., dismissed this defense in her opening statement: "President Trump is a 76-year-old man. He is not an impressionable child." She reiterated that there was overwhelming evidence that advisors repeatedly told Trump he had lost the 2020 election and there is no way he can reasonably be believed to be confused.

Still, the question of whether Trump is a liar or merely delusional when it comes to the conspiracy theories he touts continues to linger. At least, that is, until early Tuesday morning, when Trump unleashed one of those lengthy social media rants that became so normalized prior to his Twitter ban.

Trump inadvertently proved the argument of the January 6 committee: He doesn't actually believe his own conspiracy theories.

The impetus for this particular 60-post stream on Truth Social, his own faltering social media app, appears to be anger over the Department of Justice continuing to push for classified documents Trump is illegally holding onto. The actual content of the rant was disarrayed, touching on anti-vaccination conspiracy theories, vitriol towards President Joe Biden, and QAnon talk.

Donald Trump is having a total meltdown on Truth Social this morning. All of these posts are from just the last few hours. pic.twitter.com/qtQs6KEA7D

While it seemed motivated by the so-far unrelated scandal over classified documents, in this rant, Trump inadvertently proved the argument of the January 6 committee: He doesn't actually believe his own conspiracy theories.

As the committee posited, and his Truth Social rant proves, Trump leverages claims he knows are untrue for no other purpose than to rile up his supporters, confuse the public discourse, and attempt to gain political leverage from the chaos. Mixed in with the various memes Trump posted were some conspiracy theories we can know for a fact he understands are false. First, there are the anti-vaccination conspiracy theories, complete with a fabricated quote from his own daughter.

And promoting anti-vaccine messaging that includes an obviously fake quote attributed to his daughter pic.twitter.com/f2g2Yv5ZST

It's not just that the quote from Ivanka Trump is fake. We can know that Trump does not believe in anti-vaccination conspiracy theories because not only did he personally get vaccinated against COVID-19, he spent months speaking proudly of the vaccines as if he had invented them and asked his followers to get vaccinated. It was only after getting major pushback from an anti-vaccine base that Trump stopped talking up the vaccines. It was only after the anti-vaccine "occupation" of Ottawa demonstrated that the anti-vaccine cause could be harnessed for political violence that Trump really showed much interest in the conspiracy theories at all.

Prosecute Trump — it will lower the heated political temperature

It's the same story with the QAnon conspiracy theories Trump posted.

Trump is spending his morning on Truth Social directly posting 4chan and Q messages, a day after calling to be reinstated as president. He's doing explicitly what he used to try to shade or use coded language for. pic.twitter.com/ksCMJnJ8KW

Trump will repeat a conspiracy theory because he thinks doing so serves his ends, not because he believes it.

Because of this, we can conclude that what draws Trump to a conspiracy theory is not, as his defenders argue, sincere and well-meaning gullibility. Instead, his motives appear entirely opportunistic and self-serving. He will repeat a conspiracy theory because he thinks doing so serves his ends, not because he believes it.

To be certain, this is just more confirmation of what was already obvious, that Trump knows he's lying when he says he's the rightful winner of the 2020 election. As Dan Friedman at Mother Jones reported in July, a leaked tape shows Trump's close friend and advisor Steve Bannon outlining the plan to a group of associates: "What Trump's gonna do is just declare victory. Right? He's gonna declare victory. But that doesn't mean he's a winner. He's just gonna say he's a winner."

Still, it's not surprising that until now, Trump has carefully avoided signing off too openly on conspiracy theories that there is no possible way that he could actually believe. He benefits, as the "he really means it" defenses of the Big Lie demonstrate, from the air of mystery over whether he really believes the false things he says. By openly endorsing conspiracy theories he simply cannot believe, Trump has pulled back the curtain and shown that the wizard of Oz knows he's just faking it.

Trump is giving the FBI the January 6 treatment

Why Trump is now openly endorsing conspiracy theories he used to tapdance around isn't too mysterious: He and his allies have been drastically escalating rhetoric that unsubtly invites political violence in response to the FBI's efforts to recover classified materials that Trump has been illegally holding on to. By blitzing out these conspiracy theories, he's sending signals to the most unhinged people in his base. And they are most definitely hearing the signals he's sending. As NBC News reports:

Users of QAnon forums rejoiced at Trump's apparent endorsement of the conspiracy theory and its mythology. The top response on the most visited QAnon forum to one of Trump's posts about the conspiracy theory read simply, "Wipe them out sir." Others pleaded with Trump to "nuke them from orbit" and to "sir, please finish them off," referring to QAnon enemies such as Hillary Clinton and President Joe Biden.

Ultimately the "too stupid to know better" defense is a legal defense, not a political one. Even in the current hyper-partisan environment, it's a tough sell, arguing that Trump should be president again despite his own supporters believing he cannot tell truth from fiction. No, the idea that Trump attempted a coup because he was caught up in a delusion that he was righting a wrong is a clumsy attempt at making a "mens rea" argument towards innocence. The January 6 committee has already done most of the important work in dismantling that argument by establishing how his own lawyers and advisors told Trump the truth about losing the 2020 election. Still, it can't hurt that Trump just established a very public record of endorsing conspiracy theories he cannot possibly believe, showing once and for all that he knows full well the lies he tells are just that — lies.