The horrifying lesson of "Barbarian": No good deed goes unpunished 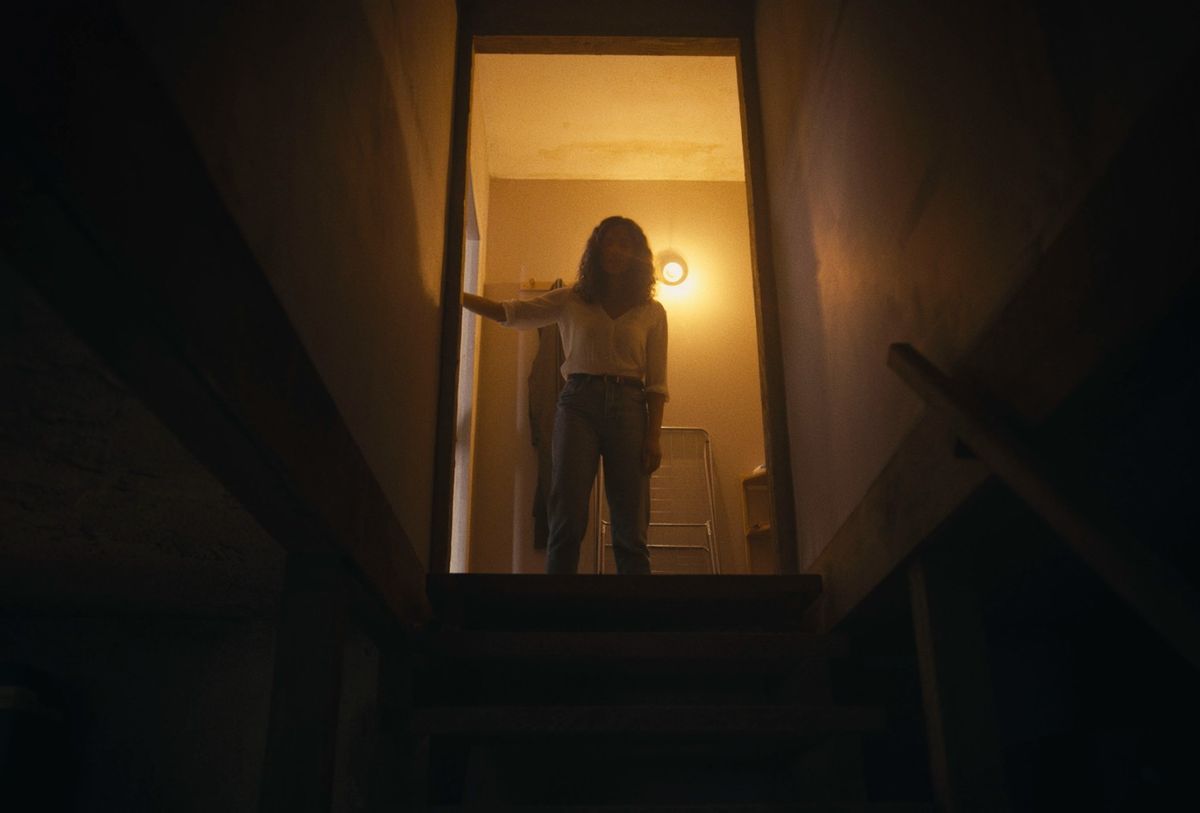 Characters in horror movies spend the majority of their screen time doing inadvisable things, which is a genre formula designed primarily for the designated "good guys" in the scenarios playing out before us.

Fans of horror usually have no problem watching maniacs slice and dice co-eds, or dance through fields wearing a face mask made out of human skin while waving a chainsaw in the air with all the joy of Christmas day. These characters are doing what they're supposed to be doing — what we want them to do in order to sufficiently rattle us. Bad guys get off easy in the court of viewer opinion, It's the protagonists that bear the brunt of our scrutiny as we mentally berate them with thoughts like, "Why the hell did they go in there?" Or, "She should have driven away when she had the chance!"

In Zach Cregger's box-office topping "Barbarian," Tess Marshall (Georgina Campbell) checks into a double-booked Airbnb in a sketchy part of Detroit and then willfully goes against what would seem like common sense by, time and time again, returning to situations that are life threatening with the hope of doing a kindness for someone else. And while it's easy to come away thinking you would have done something different, thereby saving yourself from the horrors encountered had you been in her shoes, what would a horror movie be without characters like Tess? If a bad guy is hiding in a closet and no one makes the mistake of opening the door, that would make for a pretty short movie. No good deed goes unpunished in "Barbarian," but, as we see in the film's last big gross-out scene, the alternative of being a huge selfish dick presents a far more gruesome, and way less honorable outcome. Horror movies may put their good guys through hell, but even the devil hates a coward.

"The Texas Chain Saw Massacre": A metaphor for Nixon-era mayhem 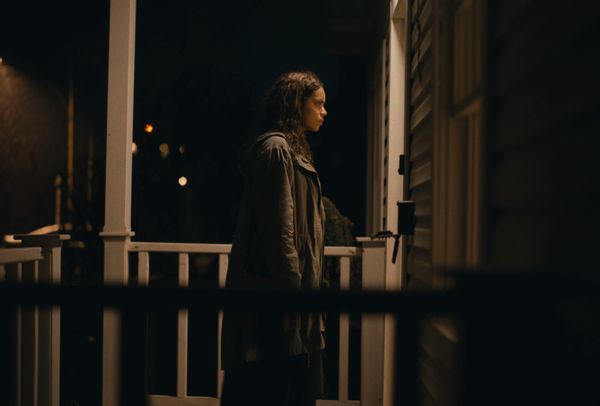 Georgina Campbell as Tess in 20th Century Studios' "Barbarian" (Courtesy of 20th Century Studios)Anyone who has seen "Barbarian" will tell you that it's best experienced by going in blind. While I'd be doing a disservice to anyone who hasn't already added themselves to the film's massive ticket sales since opening in the U.S. on Sept. 9 by providing too many spoilers, It's easy enough to describe without giving away too many of the surprises that make it so special.

In a recent interview with The Hollywood Reporter, writer and director Zach Cregger — who makes his directorial  debut with this film — says an accumulation of his own experiences both as a short-term rental host, and a user of popular rental apps like Airbnb and Vrbo, may have had a subconscious influence on his writing of the script.

"I went to a wedding one time, and I booked an Airbnb. And when I got there really late at night, it was a really bad neighborhood, and the lockbox code didn't work. So it was really scary, and I was out there on the street for half an hour. It was just sketchy as hell," Cregger says to THR.

He goes on to describe that in this experience he flagged down a nearby cop car and told the officer inside that he was going to try and break in, but assured him that he was supposed to be there. When the officer was like "don't do that," Cregger found lodging elsewhere. In "Barbarian" the character Tess does not follow her creator's lead, much to the shock and delight of viewers.

When Tess arrives at her rental in the middle of the night, she tries to access the key inside the lockbox out front, but it's nowhere to be found. Already stressed out by the snag in her plan to rest up before heading out to a big job interview early the next morning, she's further alarmed when a light turns on inside and the door is opened from the interior by a young man named Keith (Bill Skarsgård). The mere sight of Skarsgård in this role, and in this setting, sets off an alert in viewer's minds that this must surely be the bad guy, since he's best known as the notorious Pennywise the clown from the 2017 "It" remake. But where "Barbarian" goes from here could not (unless the movie had already been spoiled for you elsewhere) be anticipated. 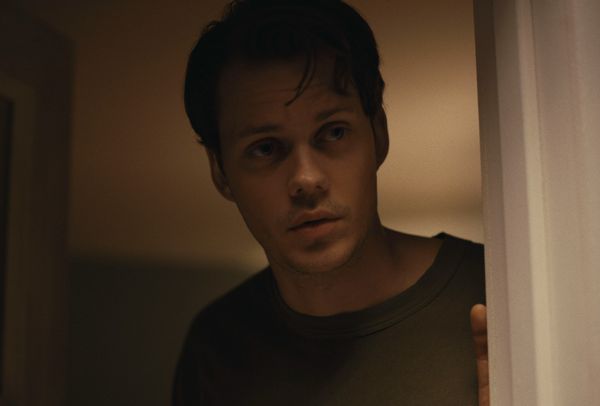 After Keith convinces Tess to come in "where it's safe" so she can try to get ahold of someone at the booking agency, or use the WiFi to locate somewhere else to sleep that night, we're just bracing for what's coming next. We don't know what's about to happen, but we know it won't be anything good.

Unable to get in touch with anyone who could help clear up the rental's double booking, Tess goes online to try to book a hotel in the area, but nothing shakes out. Keith says it's probably because there's a convention in the area, and offers to let her sleep in the bedroom while he takes the couch for the night. "Yeah right," we're thinking. "Yeah right" is right!

Through all this tense anticipation, Skarsgård does a fantastic job of invoking his Pennywise eyes to keep viewers on the edge of their seats. He offers tea, which Tess doesn't drink; and then he offers to open up a bottle of wine right in front of her so she knows he didn't put anything in it. At first Tess keeps a safe distance, but before too long she lets her guard down enough to take him up on that wine. Several red herrings are thrown out during the early interactions between Tess and Keith but, somehow, seeing her wake up safe and sound the next morning is even more chilling than anything we'd already been shown. If Keith isn't gonna try to kill her, then who, or what, will be popping up next? Well, turns out it's not what's in the house that Tess should be worried about, it's what's under it.

Tess made a huge mistake by going into that house in the first place, but she makes the first of many larger ones when she successfully leaves to go on her interview and then COMES BACK. During a series of scenes wherein she continuously teeters on the edge of danger, retreats to safety, and then comes back to teeter some more before finally falling in completely, she's maddening for her inability to choose saving herself over trying to help others.

While rooting around for toilet paper, Tess gets locked in the basement and discovers a hidden room containing the most ominously sparse furnishings you could imagine: a bloody mattress, a video camera and a bucket. When Keith returns, having gone off to run an errand or something, she yells for him from a small window in the basement and then squeezes a key through so he can let himself in. Hearing her frantic recounting of what she discovered doesn't register to Keith as being as big of a concern as it very much is, so he makes his one and only mistake by going down to check for himself. Does he make it back out? *Insert shrug emoji*

Through this whole film I found myself grappling with the concept of villains, and what makes a true villain. Is it someone who is Inherently bad — born and bred in evil, going on to inflict more evil upon the world? Or is a villain someone who knows how to be good, but chooses not to be?

Halfway through "Barbarian" a new character is introduced as the story takes a sharp turn. In Cregger's previously mentioned interview with The Hollywood Reporter he said that this choice was one that caused many doors to be slammed in his face while trying to get the movie green-lit.

"It took me two years to get anyone interested in this," Cregger says. "I just kept hearing the same things: 'You can't introduce a character on page 50.'"

The character he's talking about here is a morally devoid show business turd named AJ Gilbride (Justin Long) who is being black-listed in the industry after being exposed as a rapist. Current owner of the rental home, AJ is less concerned with the bloody mattress in the basement than he is calculating the exact square footage of the place so he can flip it. This character, more than what lays beneath the home in the film, is the true villain. But Tess risks her life, multiple times, to save him. Was it the best decision? Probably not, but I'd venture to say that it was the right one. Being a good samaritan can get you killed, sure, but you should try to be one anyway. Once a person starts weighing the value of another person's life over their own the already fuzzy line between villain and hero blurs even more.

The fact that the audience knows that AJ is a rapist but Tess does not leaves us with an interesting moralistic question to ponder. Would she, as someone presented as "good," still have tried to save him if she'd known? And if we'd been in her shoes, knowing what we did know, would we have? 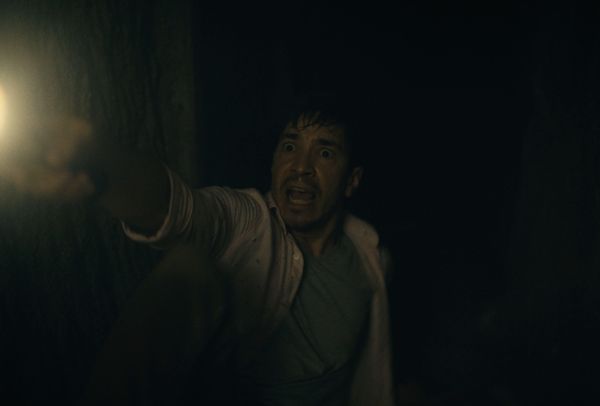 While watching "Barbarian," which is one of the only horror films I've ever seen to make me audibly exclaim "What. The. F**k," right out in front of God and everyone, I was, oddly enough, reminded of the two-part series finale of "Seinfeld." In that finale the long-running comedy show is put to rest by the key characters; Jerry, George, Elaine and Kramer being sentenced to a year in prison for not being good samaritans.

If you haven't seen this episode, it starts off with Jerry getting a call from NBC saying they're finally interested in moving forward on the long-shelved show about nothing he wrote with George. While courting Jerry on this project, NBC offers the use of their private jet so he, and whoever he wants to bring, can take a trip wherever he wants. The group decides on Paris but a mishap mid-flight causes them to do an emergency landing in Latham, Massachusetts. While wandering around the town they witness a man being carjacked and, rather than help, stand around making jokes about his weight. Kramer even whips out a now very vintage-seeming video camera to tape the event. Thinking they'll just move on to find someplace to eat lunch, they're surprised when a cop swoops in to arrest them all for violating the newly installed good samaritan law. In a trial that takes up the second half of the finale, a parade of characters from throughout the whole series testify that, yes, these are all horrible people, and they're sentenced to jail.

What "Barbarian" offers, in addition to a full runtime of unexpectedly horrifying imagery mixed with surprising twists, is the chance for all of us to reflect on who could potentially show up as anti-character witnesses at our own good samaritan trials. Personally, I do appreciate my own safety, but I place far more value on working towards being a person whose gruesome death doesn't get cheered in my final act.