Oh you handsome devil: How "Bram Stoker's Dracula" ushered in our thirst for the "sexy killer"

30 years after Coppola's "Bram Stoker's Dracula," the start of the sexy killer craze can be traced back to 1992 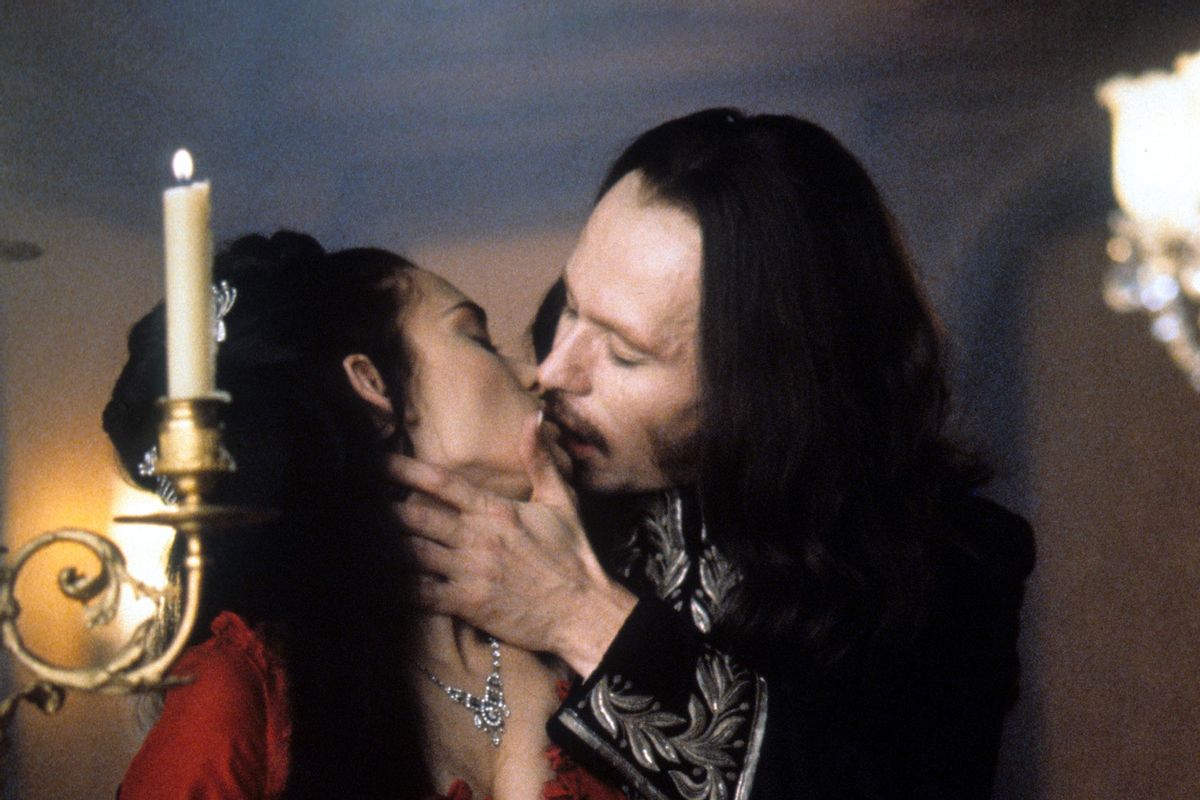 Winona Ryder and Gary Oldman kiss in a scene from the film 'Dracula', 1992. (Columbia Pictures/Getty Images)
--

In 1890, Bram Stoker began research on what would become his most famous book, "Dracula." During this research, which spanned years, the Irish author kept extensive journals in which he scribbled down his findings from hours spent poring over ancient texts pulled from the Subscription Library in Whitby, England, and from interviews conducted with members of Whitby Harbor's Royal Coast Guard.

According to a fascinating account of Stoker's research written for Time by the author's great grand-nephew, Dacre Stoker, "Dracula" — which was eventually published in 1897 — was not intended to be entirely a work of fiction, but "a warning of a very real evil, a childhood nightmare all too real." And oceans of time later in 1992, Francis Ford Coppola turned that nightmare into a romance, which filled the hearts and minds of people the world wide with a burning desire to experience a condemned love as darkly beautiful as the one portrayed by Gary Oldman as Dracula, and Winona Ryder as his destined bride, Mina Murray.

In the original text that became the basis for Coppola's "Bram Stoker's Dracula," the author did not set out to make a love story that would launch generations of people into an obsession with sexy killers.

In the original text that became the basis for Coppola's "Bram Stoker's Dracula," the author did not set out to make a love story that would launch generations of people into an obsession with sexy killers; he meant for it to be a cautionary tale – but we did not proceed with caution. Prior to Coppola's reimagining of Stoker's book in 1992, those looking to have their hearts broken and have fun doing so were presented with much tamer options for suitors. In the '50s we had James Dean in "Rebel Without a Cause" and Marlon Brando in "The Wild One," rumbling with switchblades and getting their scrapes kissed by lovers who had stepped over from the right side of the tracks to scuff their saddle shoes for a little adventure. In the '70s we had John Travolta in "Grease" and Matt Dillon in "Over the Edge," whose worst crimes didn't go much further beyond those of the petty variety. In 1987, Joel Schumacher gave us his version of the "sexy killer" with "Lost Boys," but while Kiefer Sutherland as the baby-faced, spiky blonde haired vampire David was undeniably hot, he repelled his chosen lover Star (Jami Gertz) because of his blood-sucking lifestyle.

Prior to "Bram Stoker's Dracula" most were willing to brush clumps of cigarette ash off of cardigan sweaters and, at most, bail a lover out of jail. After, we seemed more inclined to run towards danger, rather than away from it. Straight up murder was no longer a deal-breaker. And the lack of a pulse was no deterrent to pledging our undying love.

The queer horror of "Dracula"

At the center of Stoker's research when writing "Dracula," was a Romanian warlord named Vlad III who went by many other names: Vlad the Impaler, Vlad Dracula and also Voivode of Wallachia. As Stoker's great grand-nephew, Dacre, detailed in his article for Time, Stoker's notes contained many entries in which the author attempted to narrow down how it came to be that a real-life man was associated with names that had such devilish connotations.

"Dracula in Wallachian language means DEVIL," Stoker wrote in his journal. "Wallachians were accustomed to give it as a surname to any person who rendered himself conspicuous either by courage, cruel actions, or cunning."

Writing these words into my article now, I can feel my skin warming and my heart begin to quicken. Not because the thought of a warlord called DEVIL who cut off the heads of his victims, put them on stakes and used those stakes to decorate his property makes me afraid. On the contrary. Because I was born in 1977, thus placing me in high school smack dab in the center of the "killers are sexy" Renaissance of the early '90s, I'm hardwired to find this all extremely attractive. I'm sorry, youth, but Robert Pattinson's Edward Cullen has nothing on young Gary Oldman as Dracula. I'm gay as a valentine and I'd still kiss that man, with tongue, right this very second. But only as Dracula. Top hat and goofy tinted glasses and all. That handsome devil.

This movie taught us that not even death could stop love, and we've been chasing that feeling ever since.

To celebrate the 30th anniversary of "Bram Stoker's Dracula," Sony Pictures Home Entertainment released a Steelbook 4K Ultra HD package containing hours of extras. In one featurette titled "The Blood Is the Life: The Making of Bram Stoker's Dracula," Oldman talks about his portrayal of the character saying, "I tried to play him more like Raphael, like a fallen angel." And he achieved that. With his soft, long brown hair and mournful eyes delivering lines through tears like, "I've crossed oceans of time to find you," and "See me now," it's easy to understand how Ryder as Mina could tell him, "I love you. Oh, God forgive me, I do." This movie taught us that not even death could stop love, and we've been chasing that feeling ever since. 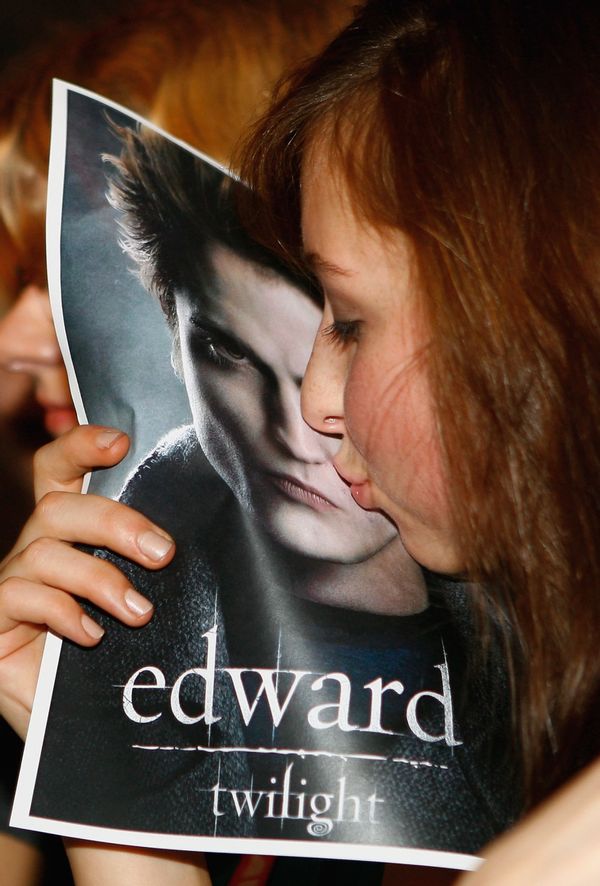 A female fan kisses a poster showing the face of actor Robert Pattinson before the presentation of his new film 'Twilight - New Moon' at an HVB youth event at the Olympic Hall on November 14, 2009 in Munich, Germany. (Alexandra Beier/Getty Images)By the time author Stephenie Meyer released "Twilight" in 2005, having a steamy crush on a killer did no longer register as cause for concern. In fact, her series of books that centered on a family of dreamy vamps bewitching a mortal girl, causing her to give up her own life and mortality to join them, were marketed towards teenagers, as well as the film adaptations that followed.

In 2019, Brooke Cameron, an assistant professor of English who teaches a class on Victorian vampires at Queen's University  was interviewed by the school's paper and asked why she thought the "Twilight" books and films were so alluring.

"The seductive vampire is, by definition, a source of irresistible fascination," Cameron said. "But rewrite this figure as an outsider or bad boy in a movie made for teenagers and you have an instant recipe for success . . . 'Twilight' knows its audience and delivers the goods. It taps into teenage feelings of alienation and sexual frustration. Its love story facilitates the teenage need for rebellion and some kind of expression of unconventional desire."

That unconventional desire that Cameron mentions branches outside of vampires. Since the release of "Bram Stoker's Dracula" in 1992, TV showrunners and filmmakers ran with the whole dreamy vamp thing for years, sure, and there's no sign of it stopping, but past the heyday of "Buffy the Vampire Slayer" and "Twilight," we now have Skeet Ulrich as Billy Loomis in "Scream," and, my personal favorite, Adam Driver as Kylo Ren in the most recent block of "Star Wars" films to lust over. All killers. All fine by me.

Towards the end of "Bram Stoker's Dracula," Winona Ryder as Mina leans over the body of her slain lover, Dracula, and even in knowing that she made the right decision in killing him to save her mortal soul, she misses the love she knew with him.

"There, in the presence of God, I understood at last how love could release us all from the power of darkness. Our love is stronger than death," she says through tears.

Sure he was a killer, but once you experience a love like that, nothing else can quite compare, and we have "Bram Stoker's Dracula" to thank (blame?) for it.