Did Western philosophy ruin Earth? A philosopher's letter of apology to the world

Much of western European philosophy, from ancient Greece to the present, has led directly to unspeakable evil 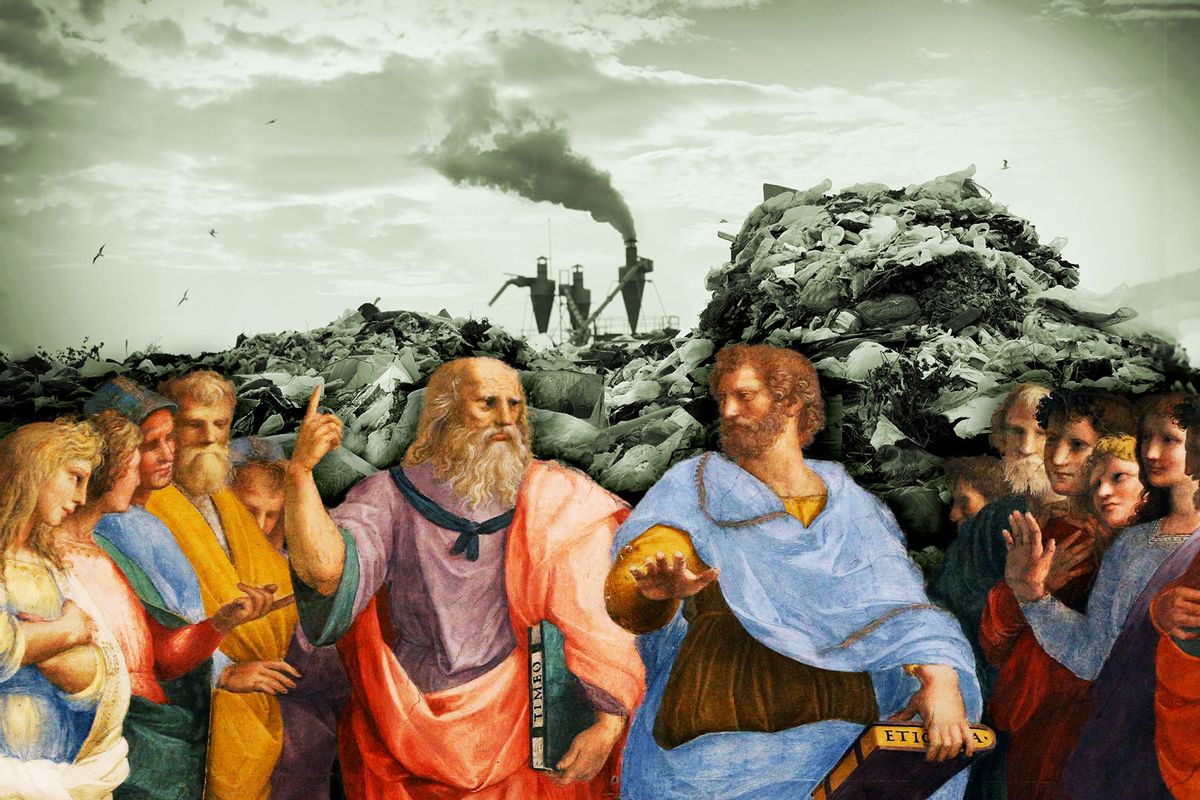 As a little girl, Roberta Hill survived four years of physical and sexual abuse in the Mohawk School in Canada, one of 139 residential schools designed to forcibly assimilate Indigenous children. An estimated 6,000 other children did not survive. Ms Hill, a Mohawk (Turtle Clan) elder once known to the nuns as #54, was raped twice by the school's principal, an Anglican priest.

"There were two ministers at the school," Ms Hill recounted. "One liked the little girls and one liked the little boys . . .  They were pretty brutalized, the boys, and if they weren't getting beaten, they were being raped." The schools were funded by the government and run by churches, primarily the Catholic Church.

We believe that much of western European philosophy, from ancient Greece to the present, has gone catastrophically wrong, pushing a worldview that justifies practices that will be seen in the future as unthinkably evil.

Ms Hill added her story to innumerable accounts of kidnapping, torture, and sexual and physical abuse in the residential schools. Children died of starvation, infectious disease, fire and, when they tried to escape, exposure. One of three possible punishments awaited children who spoke their Native tongues, Ms Hill told the Toronto Star — a beating with a leather strap, a needle through their tongues, or a kerosene-soaked rag in their mouths.

In his recent penitential pilgrimage to Canada, Pope Francis begged forgiveness for the "catastrophic" and "deplorable" wrongs the Church had committed against these Indigenous children. The cultural genocide and cruelty inflicted on the children seem unthinkable now. But as shocking as the acts themselves is the fact that, at the time, large numbers of people took them to be right and good, even morally necessary. The atrocities were justified by ideas embedded in the worldview of western European civilization and, by extension, in Catholic doctrine.

The dreadful lesson is that ideas have powerful consequences. When worldviews go wrong, so do the acts that grow from them.

We believe that much of western European philosophy, from ancient Greece to the present, has gone catastrophically wrong, pushing a worldview that justifies practices that will be seen in the future as unthinkably evil. Primary among these are the profit-driven rape and pillage of the planet, and the consequent immiseration of the people.

We are two professional philosophers who have been trained to advocate the destructive worldview that has made world-wrecking practices not only thinkable, but normal, necessary, the way things have to be. We step forward now to ask for forgiveness. Western philosophy has made terrible mistakes. We repudiate the destructive ideas, "with shame and unambiguously," as the Pope said, and call for the creation of new or the rediscovery of old truths that redeem our species' promise as full members of a shining, resilient, endlessly creative Earth community.

What set of ideas makes it okay (natural, right and good, inevitable) that people grow rich by tearing the trees, the minerals, the living beings from the earth? In what moral world is it just-the-way-it-is when nations and industries in collusion disrupt the climate, putting more than a third of Pakistan underwater, killing entire ecosystems, and pushing the world toward an extinction event as disastrous as the asteroid that ended the era of the dinosaurs? The atrocities visited upon the wild, reeling world and its inhabitants are the perfect manifestations of a set of claims made originally by Ancient Greek philosophers such as Democritus and Leucippus, glorified in the 15th and 16th century European Renaissance by philosophers such as Francis Bacon and Rene Descartes, refined by public scholars such as John Locke and Adam Smith, and to a large extent unquestioned to this day.

It is clear that this experiment in thought and action took the world in the wrong direction, leading to moral failings of jaw-dropping, world-threatening proportions.

What are some of those disastrous claims? Begin with the debasement of many people and all of nature in the Great Chain of Being, a hierarchy that put white men next to the angels at the top of Creation, separate from and superior to people of color, above the animals, plants, and all the 'lesser' levels of beings. Strip the sanctity from the world by insisting that only humans have souls, while the rest of creation – forests, wildlife, domestic animals (and quite possibly Indigenous people) — are soulless, unthinking, unfeeling machines, created to serve the needs of their human masters. Add the idea that the purpose of science is to increase the human ability to control nature and turn it to human uses. Add the doctrine of Terra Nullis, that lands not occupied by Christians were empty lands, open to colonialization. Add the ideology of manifest destiny, that those of the dominant western worldview are destined by God to spread their way of being around the world. Announce, counter to evidence, that humans are naturally selfish and that raw competition is the most efficient route to wealth and thus happiness. Then add the moral travesty that the means are justified by the ends. The power of these ideas fused with the mechanical power of the Industrial Revolution to create the harms visited upon the Earth and its people.

We live at the end of a millennium-long experiment in thought and corresponding action. As the Earth's living systems unravel, as the world becomes biologically and economically impoverished, as men of immense wealth build bunkers or rocket ships to protect themselves from the disasters they have created, it is clear that this experiment in thought and action took the world in the wrong direction, leading to moral failings of jaw-dropping, world-threatening proportions. Western European philosophy got it horribly wrong. The world has a chance now – probably a last chance – to get it right.

Now we ask all people of conscience and imagination – including other philosophers — to join in the search for a better understanding of the relation of humans to the wild world and to one another. We call for humility to replace hubris, for service to the Earth to replace service to the economy, for an ethic of care and reciprocity to replace one of callous rapaciousness, and for acts of love to replace those born of selfishness and arrogance.

The "disastrous error," to use Pope Francis' words, leads us to a "sense of sorrow, indignation, and shame." We, philosophers, ask for the world's forgiveness, taking heart in the Earth's ability to heal -- those new beginnings that come each year with the seasons, the tides that turn, always turn when they reach the lowest ebb, and the human proclivity to think of a better way.

about climate change and humanity

Michael Paul Nelson, Ph.D., is Professor of Environmental Ethics and Philosophy at Oregon State University. He is the author of more than 200 articles and essays in and around the area of environmental ethics, and the co-author or co-editor of four books.

Kathleen Dean Moore, Ph.D., is Distinguished Professor of Philosophy Emerita at Oregon State University and the author or co-editor of a dozen books about our cultural and moral relation to the natural world. Among these are "Moral Ground, Ethical Action for a Planet in Peril," co-edited with Michael Paul Nelson.