As senators debate the Kroger-Albertsons merger, some grocery employees still aren't being paid

Since Labor Day, Kroger has blamed a "glitch" in its new payroll system for incomplete and late paychecks 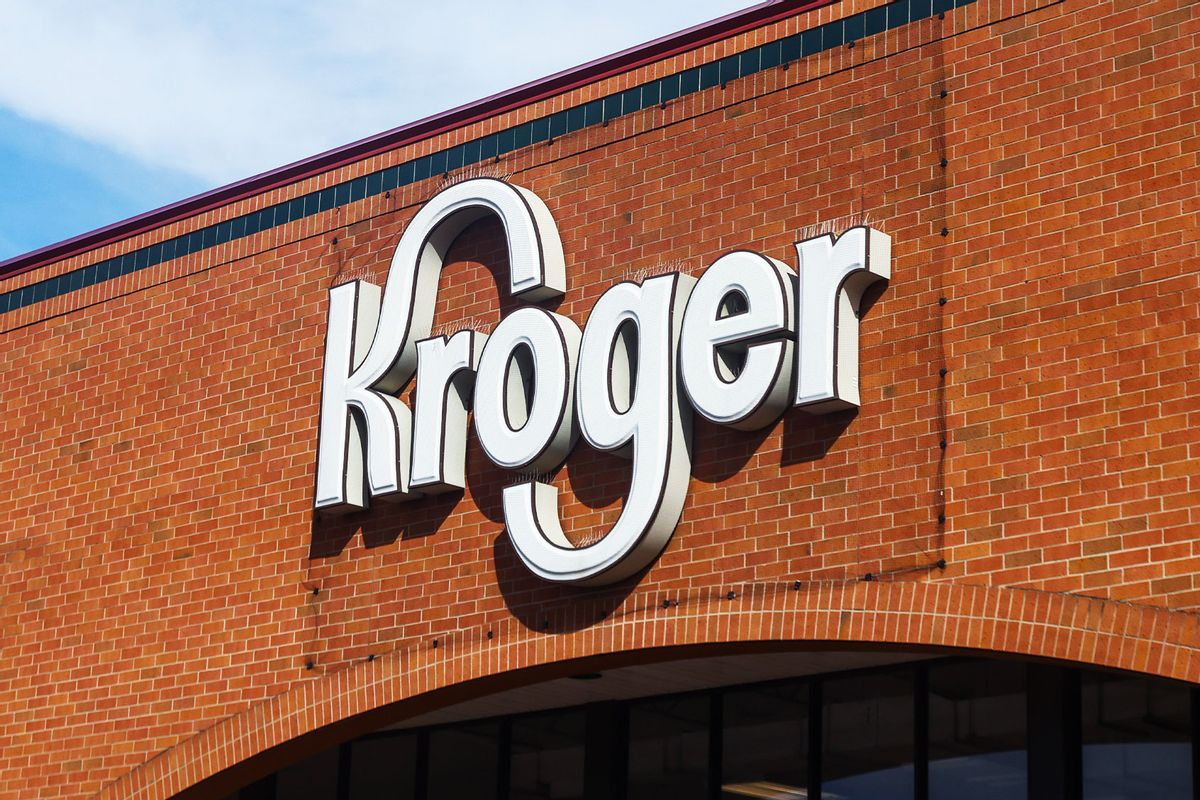 Chief executives of the two largest U.S. supermarket chains, Kroger and Albertsons, stood before members of the Senate Subcommittee on Competition Policy, Antitrust and Consumer Rights on Tuesday to defend a proposed $20 billion merger.

Rodney McMullen, chairman and CEO of The Kroger Co., told committee members, chaired by Sen. Amy Klobuchar, D-Minn., that the merger would "bring together two complementary organizations to establish a national footprint, allowing us to expand our customer reach and improve proximity to deliver fresh and affordable food."

But senators across party lines questioned the need for a merger — and voiced concerns over whether one would result in lost jobs and decreased competition in the grocery sector. Among them, Sen. Mike Lee, R-Utah, the subcommittee's ranking GOP member, expressed skepticism that the companies would actually keep prices low for customers.

"Inflation, to put it gently, is wreaking havoc on our entire economy," Lee said. "But not on the grocery industry, it appears."

McMullen responded that the combined entity had plans to keep prices stable. Price cuts, he said, would begin immediately, and no "front-line workers" in stores, warehouses or manufacturing facilities would be laid off amid the merger.

Members of Congress aren't the only parties who have voiced concern over the proposed merger, however.

Prior to the hearing, grocery workers represented by the United Food and Commercial Workers (UFCW) International Union — which represents 100,000 Kroger and Albertsons workers in 12 states and the District of Columbia — held a press conference demanding that lawmakers stop the merger.

"This merger is based on pure greed. I want the executives and Wall Street bankers who cooked it up to know how devastating it will be for both workers and customers," Judy Wood, a cake decorator at Albertsons for 34 years and a member of UFCW Local 324, said. "The stores are going to raise prices without consequence because they won't face competition. Kroger will close down stores that are too close to one another, putting customers out of options and workers out of jobs. It's estimated over 5,700 workers could lose their jobs just in Southern California, so we need to do everything we can to fight this merger."

"What does my future hold working for a company without any money? How will Safeway keep its promise to fund our pension? You can see why workers like me are worried."

Jane St. Louis, a front end associate at Safeway, which is owned by Albertsons, said "the private equity guys" who are brokering this deal have never worked in the grocery industry.

"They do not know or care about our business — all they care about is making money for themselves," she added. "And now, they are trying to give themselves a $4 billion payday before this merger is even reviewed by the FTC. What does my future hold working for a company without any money? How will Safeway keep its promise to fund our pension? You can see why workers like me are worried."

In her remarks, St. Louis referred to an "unusual" $4 billion special dividend announced by Albertsons in conjunction with the merger. The payment would represents nearly all the supermarket chain's liquid assets.

Critics of the deal have alleged that Albertsons announced the payout in an apparent attempt to make the merger look more favorable to government regulators, as it would give the appearance of a financially solvent company merging with a company in need of financial assistance.

"It is seemingly a brazen attempt to manufacture new facts on the ground by destabilizing Albertsons' competitive position and jeopardize the FTC's ability to fully exercise its statutorily-mandated antitrust oversight because the self-sabotaged shell of Albertsons that remains will likely argue that it will fail if the merger is rejected," said a letter sent to sent to Khan by 26 organizations, including the American Economic Liberties Project, the Center for Economic and Policy Research and the UFCW.

D.C. Attorney General Karl A. Racine filed a lawsuit on Nov. 2 "asking that the Court block Albertsons from issuing the payout to shareholders until a full review of the proposed merger agreement can be completed and is seeking a temporary restraining order (TRO) for immediate relief."

This suit was joined by the offices of the attorneys general for the states of California and Illinois and filed under seal in the U.S. District Court for the District of Columbia.

However, Judge Carl Nichols — who clerked for Supreme Court Justice Clarence Thomas from 1997 to 1998 and was appointed to the U.S. District Court for the District of Columbia by former President Donald Trump in 2018 — refused to halt the payment. According to court documents, Nichols noted that the company had reported strong earnings, and the dividend payment had been vetted by investment banks and approved by Albertsons's board of directors. Halting the payment would "interfere" with the board's decision and harm shareholders, the judge found.

That said, Washington state Attorney General Bob Ferguson also filed a suit in state court seeking to stop the payout. King County Superior Court Commissioner Henry Judson approved a temporary restraining order blocking Albertsons from paying a special dividend while the court determines if the payout violates state antitrust laws. The judge scheduled time to hear witness testimony, and then have a follow-up hearing on the matter, meaning that the temporary restraining order will remain in place through at least the Dec. 9 hearing.

Running parallel to anxieties surrounding the merger — though they've received far less mainstream attention — are ongoing reports from Kroger employees regarding late, partial and missing paychecks. As Salon Food reported on Nov. 11, these reports appear to have originated around Labor Day, following a shift to a new payroll software.

Management at Kroger referred to this issue as "a glitch," according to a November email sent to an area manager in the Midwest that was reviewed by Salon Food. Per the email, they were "aware of the issue with relief [pay] being entered, but not paid out." However, they didn't indicate to employees when the issue would be resolved.

In a previous story shared with Salon Food, Mark Kilbrade had been working at one of the supermarket chain's Centreville, Ohio, locations for about a year when he put in a vacation request. Though Kilbrade's request was approved by management, paid time off wasn't reflected in his check after he returned from vacation. In fact, it wouldn't be reflected for another four weeks, after he involved a union representative.

"I decided once I got my pay to leave the company, and I did without a proper notice," Kilbride wrote in an email to Salon Food. "You don't mess with employee's pay. Fortunately being married, my spouse had income, so it did not hurt much. But if it were just myself, there is no way I could have made ends meet."

Kilbride isn't alone; Salon Food previously communicated with more than a dozen past and present Kroger employees, all of whom shared similar stories. It remains unclear how many employees have been impacted by the ongoing payment issues. The company hasn't responded to a total of five requests for comment.

According to an email sent from corporate leadership to area managers, at least 5,000 Michigan Kroger employees received impartial Labor Day weekend paychecks. Since Salon Food's story about this "glitch" was first posed earlier in November, 10 present employees have reached out to Salon Food, saying they haven't received full paychecks on background via email and social media messaging.

Nationwide, Kroger has nearly 2,800 stores in 35 states operating under 28 different brands, including Mariano's and Ralph's. Salon Food has spoken to more than 20 employees from across the country — both on the record and on background — whose stores have been personally impacted by the payroll glitch.

In recent weeks, several lawsuits and class-action grievances have been filed against Kroger.

Most recently, on Nov. 25, one current and one former Fred Meyer store employee filed a complaint in federal court against Kroger, Fred Meyer's parent company. According to a report in The Oregonian, the workers alleged that Fred Meyer had violated Oregon wage laws when it rolled out a faulty payroll software as part of a companywide human resources system upgrade that caused widespread pay errors.

"Fred Meyer knew, or should have known, in advance of activating the new payroll system that it would cause widespread pay errors," the complaint said, alleging that Fred Meyer didn't plan adequately nor conduct enough testing before the rollout. Moreover, it claimed that the problems could have been prevented.

The lawsuit is seeking class-action status, all wages owed to the plaintiffs, attorney feed and incurred damages as a result of the payroll errors.

"When you are living paycheck to paycheck, a short or missed check isn't just a temporary inconvenience; it can mean racking up late payments on rent and bills, skipped meals, and struggling to afford gas."

According to records obtained by The Oregonian, at least 20 former and current employees have filed suit against Kroger regarding incomplete and late payments.

Dan Clay, president of the UFCW Local 500, which represents Kroger employees from the region, issued a statement on Nov. 17 indicating that his organization was connecting members with legal representation.

"Kroger, who owns Fred Meyer and QFC, implemented new accounting software they didn't know how to use," he said. "When you are living paycheck to paycheck, a short or missed check isn't just a temporary inconvenience; it can mean racking up late payments on rent and bills, skipped meals and struggling to afford gas. Victims are being pushed into a financial hole that can take months to crawl back out of. For a worker to go without pay because a multibillion-dollar corporation cannot figure out their payroll software is beyond unacceptable."

The chains have said they expect the regulatory review process to take as long as two years, with the deal closing in early 2024, if a federal judge rules that the merger can move forward.

This story has been updated to include developments on the Washington state court level. Follow Salon Food's ongoing coverage here.