They're called "elaliite" and "elkinstantonite," and geologists have never seen them form naturally on Earth 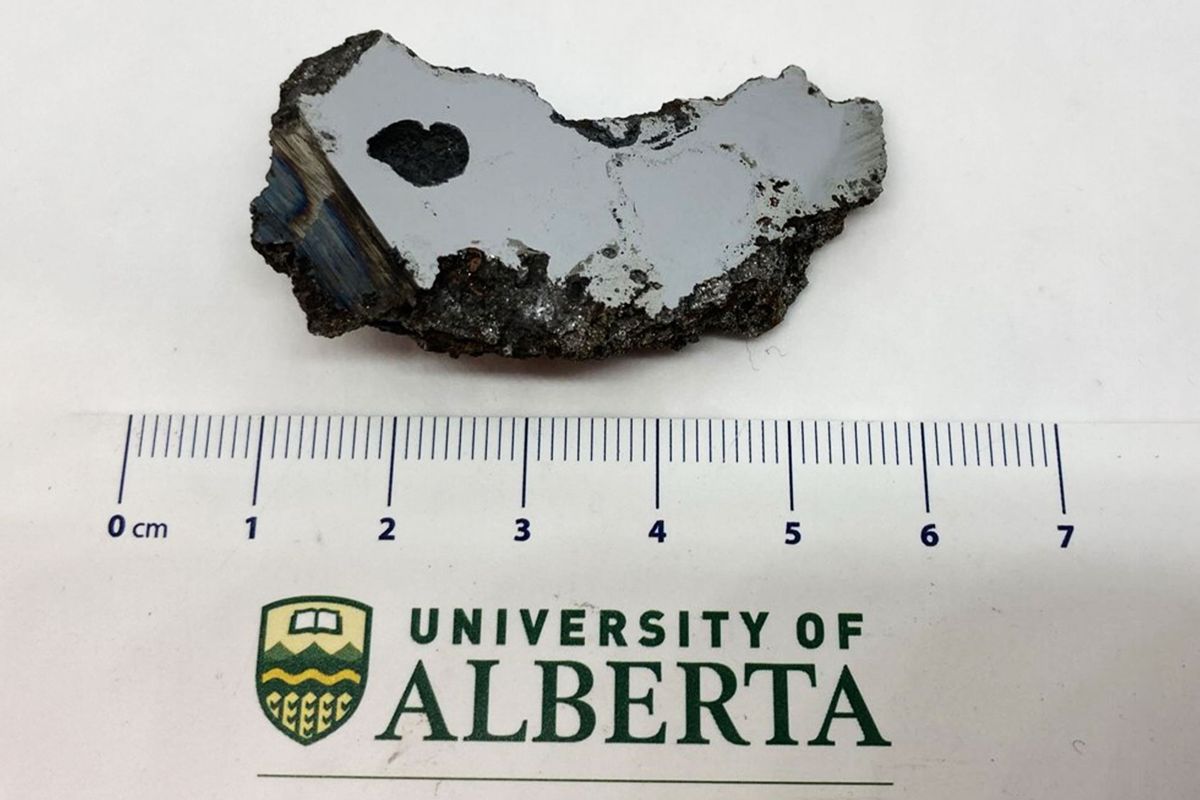 A space rock that crashed in Somalia decades ago lay partially encased in sand until 2020, when researchers dug it up and sliced into it for samples. Inside the 15 ton meteorite — the ninth largest ever found intact on this planet — were two minerals, and possibly a third, that had never before been seen on Earth. The finding could not only inform theories on how asteroids form, but inspire new forms of synthetic materials for future manufacturing.

El Ali is a small village in Somalia's Hiiraan region, with a population under 200,000, but a long time ago it received a new visitor from space. Local camel herders have known about the large chunk of (mostly) iron, which they call "Nightfall," for between five to seven generations. The El Ali meteorite has been "memorialized through Saar folklore, songs, dances and poems," according to a report in the Meteoritical Bulletin Database. They even used the rock as an anvil to sharpen their knives.

In September 2019, artisanal miners were hunting for opal in El Ali, as the desert region is rich in the popular gemstone. When they learned of the El Ali stone, they immediately recognized it as a meteorite and collected a sample. The prospectors, from the Kureym Mining and Rocks Company, sent a single 70 gram slice to Chris Herd, a professor in the Department of Earth and Atmospheric Sciences and curator of the University of Alberta's Meteorite Collection.

After the specimen was polished and etched, it revealed an unmistakeable Widmanstätten pattern, which is a key indicator that this rock originated off-world. When he dissolved and analyzed the sample, Herd discovered two minerals that have never previously been found on Earth before. He dubbed them elaliite and elkinstantonite.

The first is named for El Ali, the region where the meteorite was found, while the latter is named for Lindy Elkins-Tanton, a planetary scientist, professor at Arizona State University's School of Earth and Space Exploration and principal investigator of NASA's upcoming Psyche mission, which is slated to explore the metallic asteroid 16 Psyche in 2029.

"Lindy has done a lot of work on how the cores of planets form, how these iron nickel cores form, and the closest analogue we have are iron meteorites. So it made sense to name a mineral after her and recognize her contributions to science," Herd explained in a statement. "Whenever there's a new material that's known, material scientists are interested too because of the potential uses in a wide range of things in society."

There could be more minerals waiting to be discovered in the meteorite, but further analysis is needed. The reason why elaliite and elkinstantonite were relatively easy to detect is because they've both been made synthetically in a lab in the 1980s, so chemists had references to go from. But lab-made materials aren't technically minerals, so they don't receive special names like grossite, a mineral made from calcium aluminum oxide found on Earth and in meteorites.

"The very first day he [Locock] did some analyses, he said, 'You've got at least two new minerals in there,'" Herd said. "That was phenomenal. Most of the time it takes a lot more work than that to say there's a new mineral."

A mineral is a solid inorganic substance that occurs naturally. Under the right conditions, it can form crystals, depending on its chemical makeup. Diamonds are pure carbon minerals. There are many different kinds of minerals that have been first discovered in meteorites, including some with interesting names like brianite and xifenguite.

Herd noticed something strange about El Ali when analyzing it, but then he brought in Andrew Locock, the head of the University of Alberta's Electron Microprobe Laboratory, whose work has included describing Heamanite-(Ce), a new mineral discovered inside a diamond in 2020.

"The very first day he [Locock] did some analyses, he said, 'You've got at least two new minerals in there,'" Herd said. "That was phenomenal. Most of the time it takes a lot more work than that to say there's a new mineral."

Herd first presented his findings at the Space Exploration Symposium on November 21st, describing the unique way in which El Ali likely formed. Most iron meteorites were part of the core of an asteroid, but the El Ali is the exception to the rule.

"It's thought to be formed by impact-induced melting on an asteroid," Herd explained at the symposium. Sometimes asteroids will smack into each other so hard, their materials can become molten. "During collisions between the asteroids, that metal dust, those metal particles became molten and were assembled into one large molten body that then was later broken up. And each of these meteorites may be related then to that molten body."

The results will be published soon in a peer-reviewed journal, Herd told Salon in an email, which will cover the occurrences of the new minerals and the interpretation of the conditions under which they formed.

But one question seemingly lost in the coverage of this space rock is, didn't it technically belong to the residents of El Ali? In other words, was it taken without permission from these people who seemingly have a strong cultural connection to this meteorite?

"What I understand is that the meteorite was taken from its original location by the finders to Mogadishu, where it was reportedly confiscated by the government," Herd told Salon. "However, eventually it was released, allowing for its export to China. I don't know much beyond that — except to say that I know that meteorites such as this one can have cultural and historical significance. We (the scientists involved in classifying the meteorite) hope that something can be done to recognize this potential significance."

Studying meteorites and asteroids (the difference being a meteorite is an asteroid that has crashed to Earth) can tell us a lot about what the early solar system was like and how it formed 4.6 billion years ago. There are potentially other minerals waiting to be discovered in El Ali, with one under consideration by the Commission on New Minerals, Nomeclature and Classification of the International Neurological Association, according to Herd's presentation.

Unfortunately, while this sample Herd and others were able to obtain was less than 100 grams, as Herd mentioned, the rest of the 15.5 ton meteorite was taken to Mogadishu, Somalia's capitol, and later moved to China, where it may be awaiting to be sold. El Ali has a long, chaotic history that brought it to Earth, but for now, its future is uncertain.