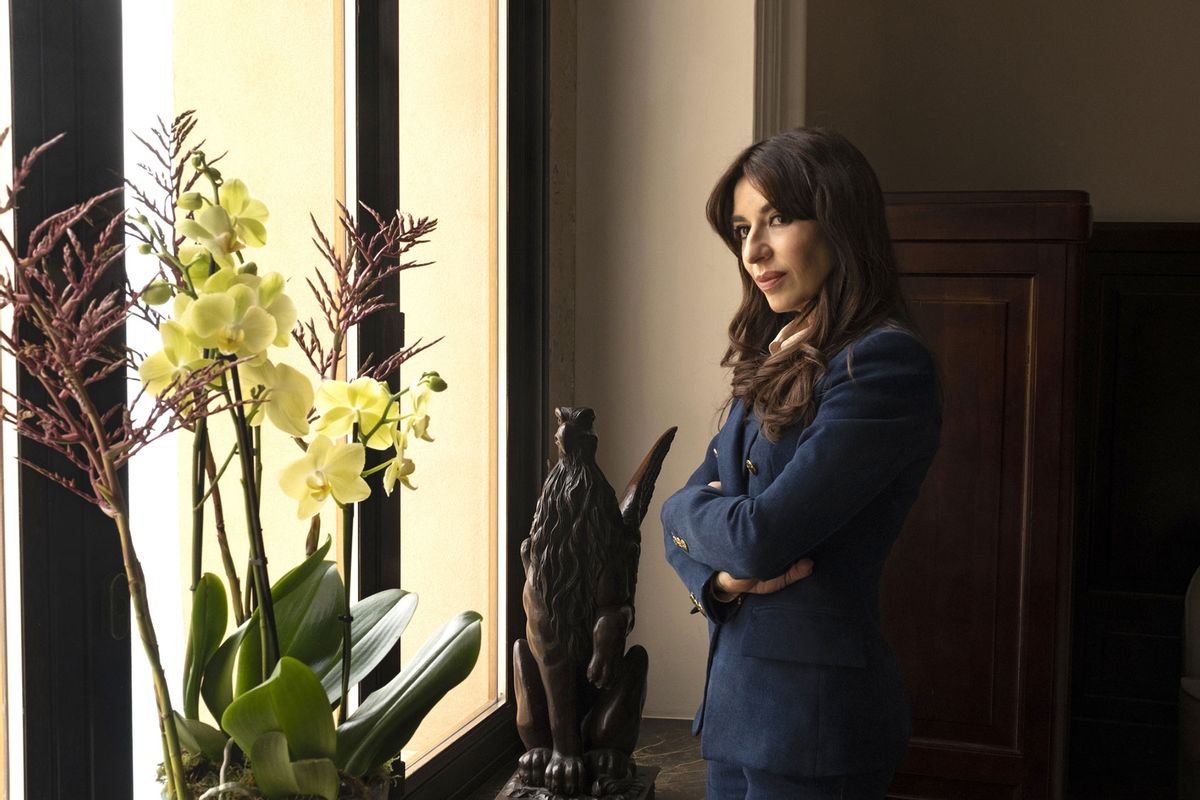 Sabrina Impacciatore in "The White Lotus" (Photograph by Courtesy of HBO)
--

"The White Lotus" envisions Sicily as a feast for the eyes . . . which are everywhere. Every room has a sculpture bearing witness to acts meant to be kept secret. The paintings on the walls judge the living; one makes a character cross herself before she exits its sightline.

Then there are the men taking in the view – leering, gawking, evaluating a woman's worth by her sensual appeal.

Sabrina Impacciatore's dictatorial resort manager Valentina acknowledges all of this by managing every detail of how the property looks and her staff behaves. But she's hardest and most exacting on herself. What Valentina's guests see reflects her stewardship's effectiveness. How her employees and the people of Taormina see her is a measurement of the respect she wields.

Valentina's gruffness is a rough mosaic combining her wish to have her orders followed and her desire to be left alone. Understandably, she's hardest on her male subordinates and customers. The man who provides her morning coffee gets her; the man who bothers her while she's efficiently consuming it does not.

The imposing shield Valentina slams between herself and the world is partly a matter of survival, partly to ensure she gets her way. But it doesn't take much to weaken it – simply a few kind words acknowledging that her front is neither impenetrable nor opaque.

The resort's concierge Isabella (Eleonora Romandini) is the first to crack it open by acknowledging her punishing work ethic. "I think you work too hard," she tells Valentina, "but I admire you. I love how you handle everyone, especially the men."

When gaze is referenced in cinematic terms, what's actually being discussed is power and control.

Valentina is visibly stunned by this kindness. It's the part where Isabella tells her, "I want to be like you" that awakens something unfamiliar in the strict manager, which doesn't augur a great outcome for Isabella's co-worker Rocco (Federico Ferrante) . . . or Isabella, for that matter.
Examining the gendered gaze in TV and film isn't a routine feature of most analysis, unless a series makes it a central feature, as "White Lotus" creator Mike White has done.

When gaze is referenced in cinematic terms, what's actually being discussed is power and control, and who the director favors with it. In this season White artfully plays both sides, although the men are constantly failing to notice what the people around them want or understand how they're perceived.

The three generations of Di Grasso men provide the most tangible example of this, with the 20-something Albie (Adam DiMarco) expressing near-perpetual shame at the examples of retrograde masculine ignorance displayed by his flatulent grandfather Bert (F. Murry Abraham) and his Hollywood producer father Dominic (Michael Imperioli). Bert is the mascot for the everyday misogyny that was acceptable until "a few years ago," while Dominic is a sex addict who can't stop cheating on his wife or disappointing his son and yet declares he's a feminist. 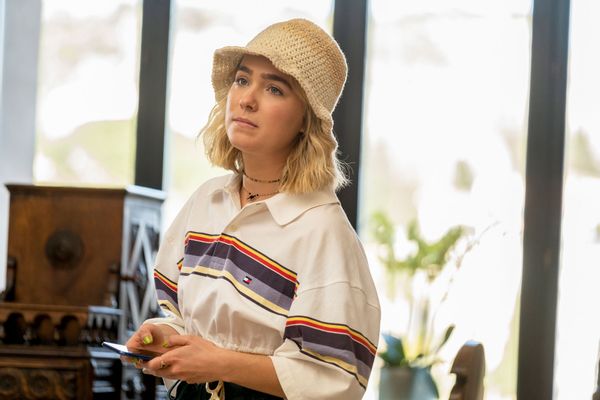 Albie, however, moves through life smugly impressed by how enlightened and considerate he is of women. Clutching those principles trusses up his passionate side, preventing him from asserting himself with the girl with whom he's smitten, a personal assistant named Portia (Haley Lu Richardson). She appreciates his niceness for a time until an edgier option comes along in the form of a British rogue named Jack (Leo Woodall).

Men like best bro millionaires Cameron (Theo James) and Ethan (Will Sharpe) are so busy eyeing each other as competition that they don't notice much about what their wives Daphne (Meghann Fahy) and Harper (Aubrey Plaza) want or need from them.

Somehow that's slightly better than what's happening to Jennifer Coolidge's Tanya, who is so desperate for attention after her husband abandoned her that she allows a sketchy yet charming gay local, Quentin (Tom Hollander), to scoop her up as a diversion. 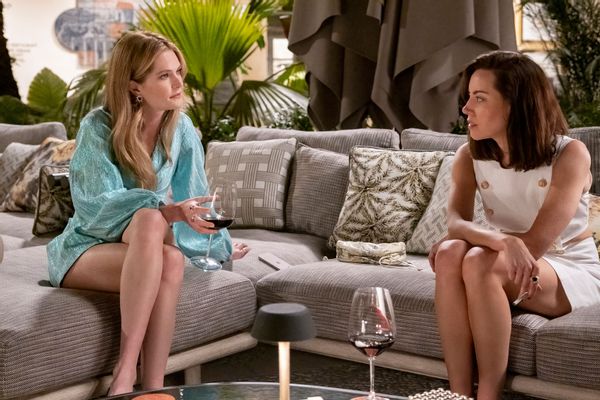 Valentina tolerates some of these guests and looks down on most of them. But she shares a common desire with these women in that all simply want to be seen.

The second season of "The White Lotus" is loaded with sex and tremors intimating the danger and tragedy looming ahead, but there's something else floating beneath the bitter shell of introversion that defines some characters and the egocentrism driving others. Let's call it longing.

Daphne knows Cameron only sees what he wants to see, which is that women are objects. She uses that as psychological camouflage to get what she wants out of their marriage, mainly his money.

So what if Cameron cheats on her, as he does with Lucia (Simona Tabasco), a sex worker who drags her best friend Mia (Beatrice Grannò) in her mess? "If anything ever did happen," she tells Harper, "you just do what you have to do to make yourself feel better about it."

Valentina's motives lead us back to the way this show interprets gaze.

Tanya wraps up her self-worth in unrealistic images; her Italian dream means dressing like Monica Vitti but it doesn't win her the worship she desires from her husband Greg (Jon Gries) her husband. Instead of this inspiring her to treat her assistant Portia better, it makes her treat her like a device that vanishes and materializes on demand. At her lowest point, Tanya crawls into bed and orders the burnt-out Portia to keep watch as she sleeps. 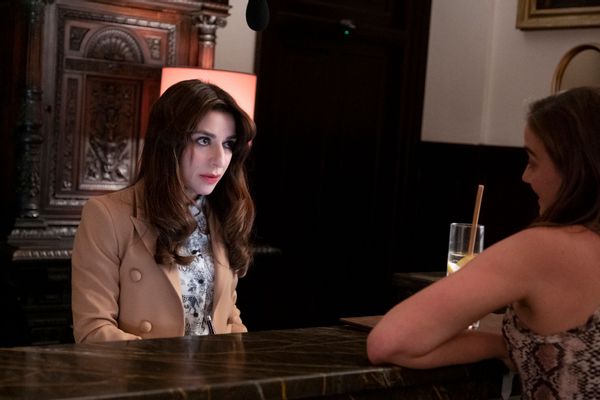 Sabrina Impacciatore on "The White Lotus" (Photograph by Courtesy of HBO)

Valentina nicknames Tanya the crazy lady. And yet, the most innocent, work-appropriate exchange with Isabella erupts into a crush blinding her to reason and propriety. She showers Isabella with gifts and moves her work friend Rocco to work beachside – for Isabella's sake, she claims, but obviously to reduce the competition.

An observant Mia sees what's going on and turns Valentina's attraction to her advantage, flirting her way into Valentina's graces by letting the manager know Mia knows she's gay. She sees something Valentina keeps hidden and uses this astuteness to angle for a job singing in the hotel lounge.

Another way to view this, as "The White Lotus" reminds us, is that the show's exhibitions of vainglory and egotism are neither inherently masculine nor feminine. Every character is some flavor of self-serving.

What moves Valentina away from her rigidity is the validation offered by people who notice her efforts and strain, and who might provide better companionship than the stray kittens she lunches with behind a building. For her, the right glance loosens the stopper holding back her need to be appreciated and adored. In a place like The White Lotus, where locking eyes with a stranger can be a steep gamble, fulfilling that desire is as likely to satiate as poison.

about "The White Lotus"