The Colorado River toad is being poached for its psychoactive venom. Is the lab-made version just as good? 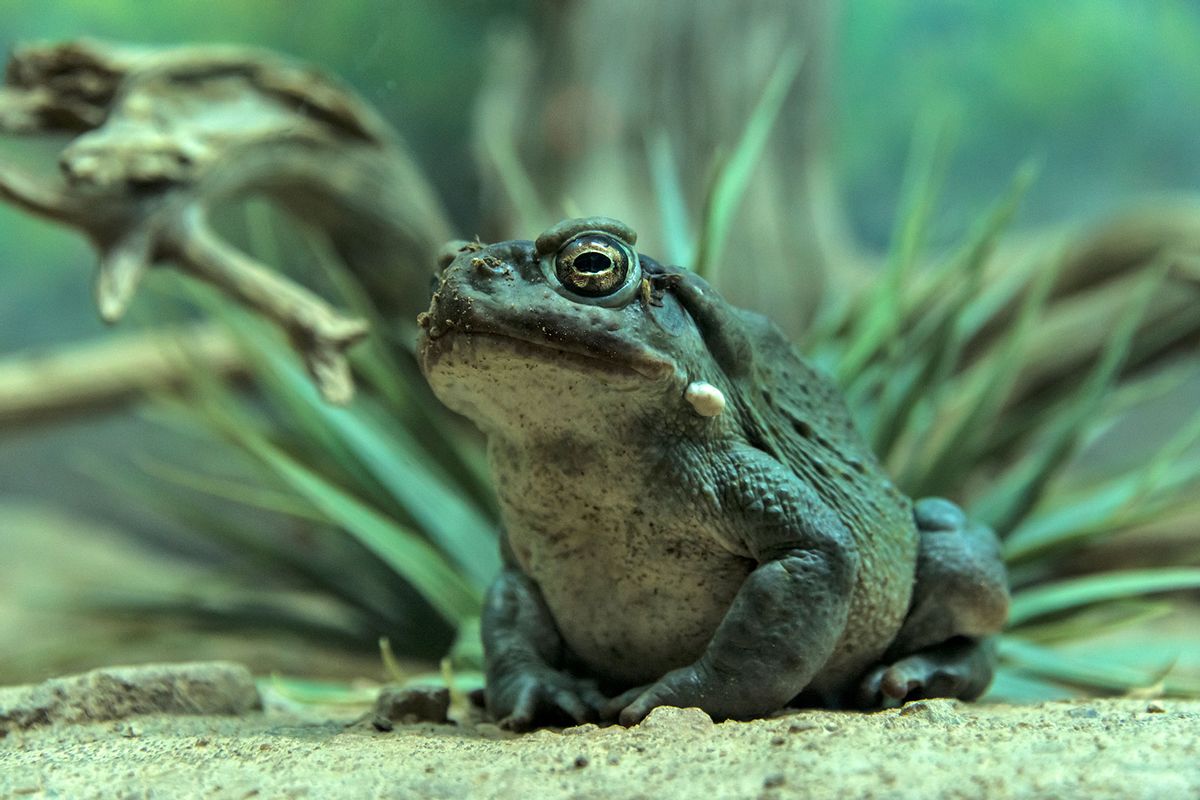 In an unusual turn for an unassuming species, a desert amphibian is at the center of both a potential ecological crisis and an evolving question of drug policy. The creature in question is the Colorado River toad, Incilius alvarius, which lives throughout the American Southwest, and evolved a unique way to deter predators: synthesizing a potent psychedelic venom whose psychoactive ingredient is known as 5-MeO-DMT.

While a coyote or hawk might freak out from ingesting this toxin, allowing the toad to escape, more and more humans are seeking out the powerful drug the toad secretes. 5-MeO-DMT (5-methoxy-N,N-dimethyltryptamine) is a psychedelic substance that has been used for centuries in traditional shamanic practices, particularly in the Amazon Basin, where it is found naturally in numerous plants.

In the Sonoran desert, which straddles Arizona and northern Mexico, Colorado River toads (also known by the outdated taxonomic name Bufo alvarius) are the only animal known to science to naturally produce 5-MeO-DMT. Despite the name, it is very different from the drug DMT (dimethyltryptamine), although both substances yield a high that lasts about the same length of time, approximately 20-30 minutes. But while DMT is characterized by bright hallucinations in which encounters with otherworldly beings are a regular occurrence, 5-MeO-DMT drug experiences are often likened to entering a "void" that completely dissolves the self or ego.

Aaron Rodgers fumbles the science on psychedelics. Drugs like ayahuasca can alter the brain—but how?

Accordingly, the drug has gained a huge number of advocates who champion its therapeutic uses.

"5-MeO-DMT helps people by allowing them more direct access to their inner workings than any other method or means or substance that I've ever seen," Joël Brierre, the president of Tandava Retreats, told Salon. At Tandava's center in Tepoztlán, Mexico, Brierre regularly hosts sessions in which participants take 5-MeO-DMT, usually by vaporizing and inhaling the drug.

"It's almost like throwing a hand grenade into the lake of the subconscious. And it allows everything to come to the surface," Brierre added.

Like other psychedelics, including psilocybin and LSD, research into 5-MeO-DMT suggests that it can alleviate symptoms of depression, anxiety, PTSD and addiction. And it usually only takes one experience to enjoy these benefits. Joe Rogan, Mike Tyson and numerous other celebrities have openly expressed how the drug has helped them. Enticed by this promise, treatment centers are popping up across the globe, especially in Mexico, where the drug is not illegal. In the United States, 5-MeO-DMT carries steep legal penalties after it was banned in 2009.

"As we say with most things you come across in a national park, whether it be a banana slug, unfamiliar mushroom, or a large toad with glowing eyes in the dead of night, please refrain from licking. Thank you."

But legality isn't stopping anyone from trying this psychedelic. Yet ethical issues and supply problems are. That's because most sources of 5-MeO-DMT come from the Colorado River toads, which are increasingly facing stresses that could make their existence more challenging. The toads' venom must be manually extracted by human hands that the toad perceives of as a threat, enough to emit the venom — an invasive process reminiscent of the extraction of snake venom for use in antivenins.

The popularity of the drug has created a cottage industry of hobbyists and psychonauts who venture into the desert in search of these toads. Indeed, the problem of toad poaching has become so severe that in late October, the U.S. National Park Service issued a social media warning to the public telling them to stop "licking" the toads.

"As we say with most things you come across in a national park, whether it be a banana slug, unfamiliar mushroom, or a large toad with glowing eyes in the dead of night, please refrain from licking. Thank you," the agency wrote.

The toad-poaching situation is a little strange for a few reasons, not least of which is that the toads are not active during October. They only emerge during the summer monsoon rains. And no one is actually licking these amphibians to get high — that wouldn't really work. Instead, people are "milking" the toads, which involves squeezing their glands until a white, pus-like venom squirts out. This is dried into a crystalized powder, then smoked or vaporized, giving users an intense rush.

If not extracted correctly, the toads can be left defenseless against predators. If too many toads are kept together in a terrarium for periodic milking, their close proximity can also spread fungal diseases. Ecologists have warned that this could have devastating impacts on toad populations. This is why more and more people who tout the benefits of 5-MeO-DMT are insisting that its users use synthetic or plant-derived versions of the psychedelic that don't involve milking an animal.

To that end, Brierre and others started an educational organization called F.I.V.E, which aims to better educate the public about 5-MeO-DMT. One of F.I.V.E's tenets is that synthetic 5-MeO-DMT is the "ethical solution" to extracting toad venom. In fact, F.I.V.E. recently announced a research collaboration effort with the University College London to study synthetic 5-MeO-DMT in 32 participants.

Yet toad venom "purists," as they might be called, don't believe the synthetic stuff is as good as the "real" thing. Evidently, toad venom contains other molecules besides 5-MeO-DMT, including a drug called bufotenine (5-HO-DMT), which also has some psychoactive effects, but are far less intense. The theory is that natural toad venom yields a so-called "entourage effect," a phenomenon where different chemical compounds within a substance work together to produce a specific effect. In short, the purists say 5-MeO-DMT on its own may just not be as good. Even if they are right, questions abound as to whether it is worth putting the health of a species at risk for this drug.

Dr. Alan Davis, a clinical psychologist and the director of the Center for Psychedelic Drug Research and Education in the College of Social Work at Ohio State University, says this difference between "natural" and synthetic 5-MeO-DMT is likely minimal.

"We don't really have enough evidence to know one way or the other," Davis told Salon. "In the absence of a clear benefit to consuming the natural substance, and there's a negative impact on a species like Bufo alvarius toad population, then to me the equation equals leave the toads alone. Don't harm a creature just because you have a desire to consume a natural substance when there is no other evidence that suggests that there's actually something superior about doing it that way."

"Yes, there might be some differences between synthetic and toad," Davis added. "But either one is going to bring you into this level of intense psychedelic experience, so it kind of doesn't matter."

The International Union for Conservation of Nature, an international organization that assesses the level of extinction threats to animals, lists the toad as "least concern," based on a 2019 assessment, but some argue that the threats against toads are still rising.

Psychonauts that are going out and catching toads are a relatively mild threat compared to urbanization, pesticides and street lights, which attract bugs and thus amphibians, which are then easy prey for predators or simply become roadkill. Davis describes these compound threats as a "concomitant trajectory of devastation."

But as interest in 5-MeO-DMT grows, underground commercial markets are emerging, with clandestine toad milking farms springing up, some of them with connections to drug cartels.

"Especially the ones that are cartel connected, they're known for over-milking," Brierre explained, noting that this not only leaves the toads defenseless but extremely stressed. "You can always tell because there'll be bits of blood and pus in the in the samples."

Nonetheless, Brierre said that there are still purportedly "ethical" ways of extracting toad venom, such as wearing gloves and milking the toads infrequently. Still, he gently tries to encourage interested parties to use synthetic versions, which aren't difficult for underground chemists to cook up.

"So many people are like, 'oh, you have to do Bufo because synthetic is poison.' And then people are like, 'oh no, you have to do synthetic because if you do Bufo, it's killing 50 toads,'" Brierre said. "And it's like, there's room for gray areas everywhere. There's room for sensibility and balance. Everyone loves to get very up in arms about their beliefs. And when it comes to something that has liberated people emotionally or spiritually, we generally over-identify with that which we've experienced to liberate us."

If 5-MeO-DMT is ever approved clinically, it is likely that its preferred route of administration will not be smoking. An intramuscular syringe is one option Davis said his team is exploring, while a psychedelic startup called Biomind Labs is developing a thermosensitive nasal gel that can deliver the drug. Clearly, there are therapeutic benefits to 5-MeO-DMT, and it is being touted as an alternative treatment in an era in which a global mental health crisis permeates almost everything. But a "vegan" process that doesn't involve extracting a drug from an animal may be the preferred method for people who care about toad welfare and conservation.

"Frankly, even if we did have a study that showed that toad was somehow better, it still is an ethical issue," Davis said. "And I don't know that like we should harm a species in order to have maybe a slightly better product, when we can still have a good product that still does a lot of the same things, and we don't have to have the ethical, karmic baggage of decimating a species."