Why do we drink champagne on New Year's Eve? 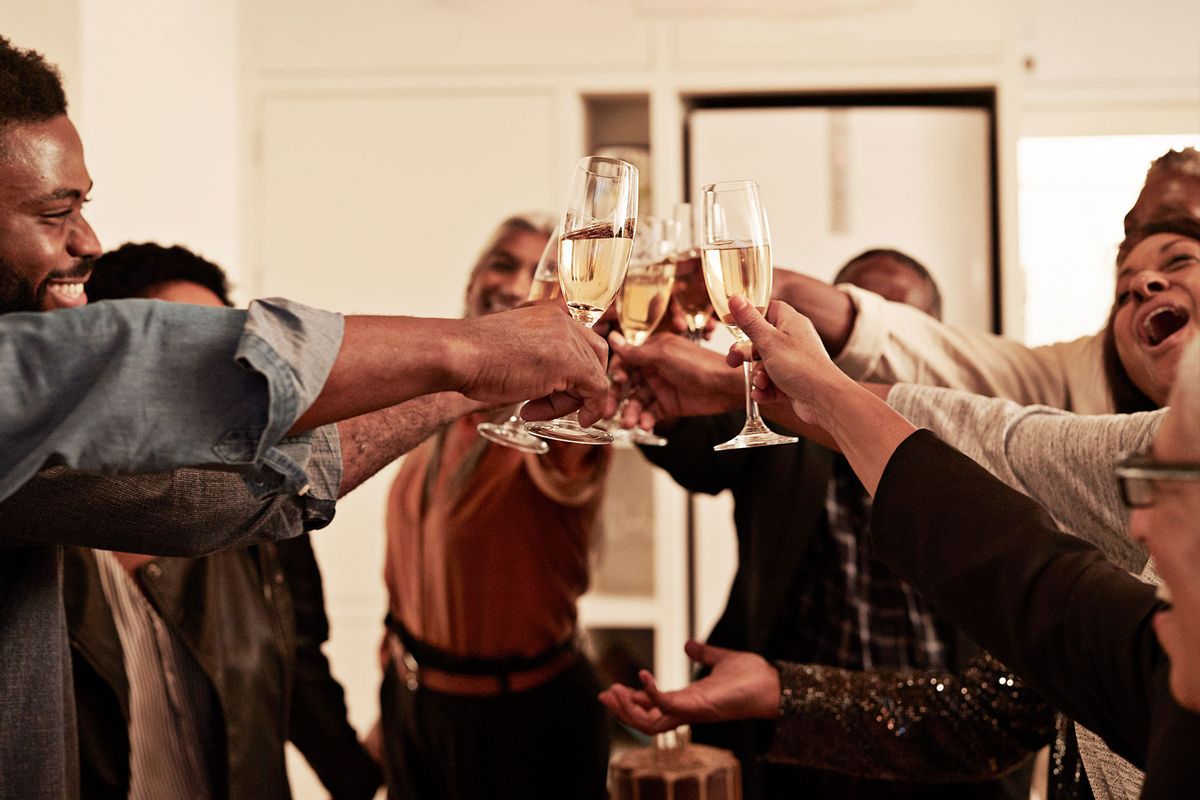 Earlier this week, I stopped into my local wine shop to pick up something bubbly for the weekend. Typically in the winter, my tastes tend to veer more towards bold, oaky red wines, but, as I texted my partner, "the New Year calls for champagne."

As soon as I hit send, I looked up and realized that I wasn't alone in the sparkling wine aisle — far from it, in fact. Dozens of shoppers were huddling around bottles of Dom Pérignon and gently pushing towards the end cap display of Veuve Clicquot. Here we all were, purchasing the exact same kind of beverage to imbibe on the exact same night and I'd never before stopped to wonder why.

The correlation between toasting champagne and celebrating the advent of a new year in the United States can be traced back to early New Year's celebrations, but as the Tiverton Historical Society has written, in the Colonial period, a different drink was associated with New Year's Eve. At the time, young ladies would get together, prepare a large bowl of wassail — a heated, spiced ale — and carry it from house to house, sharing the warm drink with their neighbors, and receiving small gifts in return.

"This was called 'wassailing,'" they wrote. "The name comes from the Middle English, waes and haeil, meaning 'health to you.' The drink consisted of mulled (heated) cider or ale, with sugar, ginger, cinnamon, and other spices mixed in."

However, it wasn't until the 1800s that staying up until midnight, when church bells would sound and some would shoot firearms, became a common practice for the holiday. Simultaneously, champagne's reputation as a celebratory beverage had already been cemented overseas. In France, the sparkling beverage, which was popularized by Benedictine monk Dom Perignon, was used to toast royal coronations, diplomatic meetings, the signing of major treaties and, in 1790, the Fete de la Federation, an event held in honor of the French Revolution.

As such champagne began to be associated with luxury; it was a beverage that gained major traction as an aspirational product. As Kolleen Guy wrote in "When Champagne Became French: Wine and Making of a National Identity," there is a record of "one observer [who] noted in 1881 that the increased use of champagne at festive gatherings was 'a charming fashion' that is beginning to be more common."

According to Imbibe Magazine, as the Industrial Revolution catalyzed the idea of an American middle class, sales of sparkling wine soared from 6 million bottles in 1850 to 28 million by 1900.

In 1902, two French brothers named Jean and Louis Martin opened Café Martin, which was well situated between Fifth Avenue and Broadway. It catered, specifically, to the American upper class and according to records, only sold champagne after 9 p.m., which only further cemented the beverage's reputation as being synonymous with luxury.

"To get a table at all on New Year's Eve is difficult," wrote a visitor in 1910, "when you get one you must drink what you are told."

According to The American Menu archives, a 1903 Café Martin menu advertised 69 champagnes; it was aggressively promoted at late-night suppers and celebrations. This wasn't just to foster a jovial environment.

"Waiters saved the corks in order to get a kickback from the wine importers for each bottle they sold," the publication reported. "After major holidays, the newspapers reported the amount of Champagne sold at the leading restaurants and hotels."

It continued: "On New Year's Eve, restaurants often displayed 'Champagne only' signs to ensure its consumption."

Through time the "champagne only" ethos has continued to saturate the holiday; according to data collected by WalletHub, 360 million glasses of sparkling wine are consumed in the U.S. each New Year's Eve, though cheaper alternatives like Prosecco and cava are increasingly popular. I can toast to that.