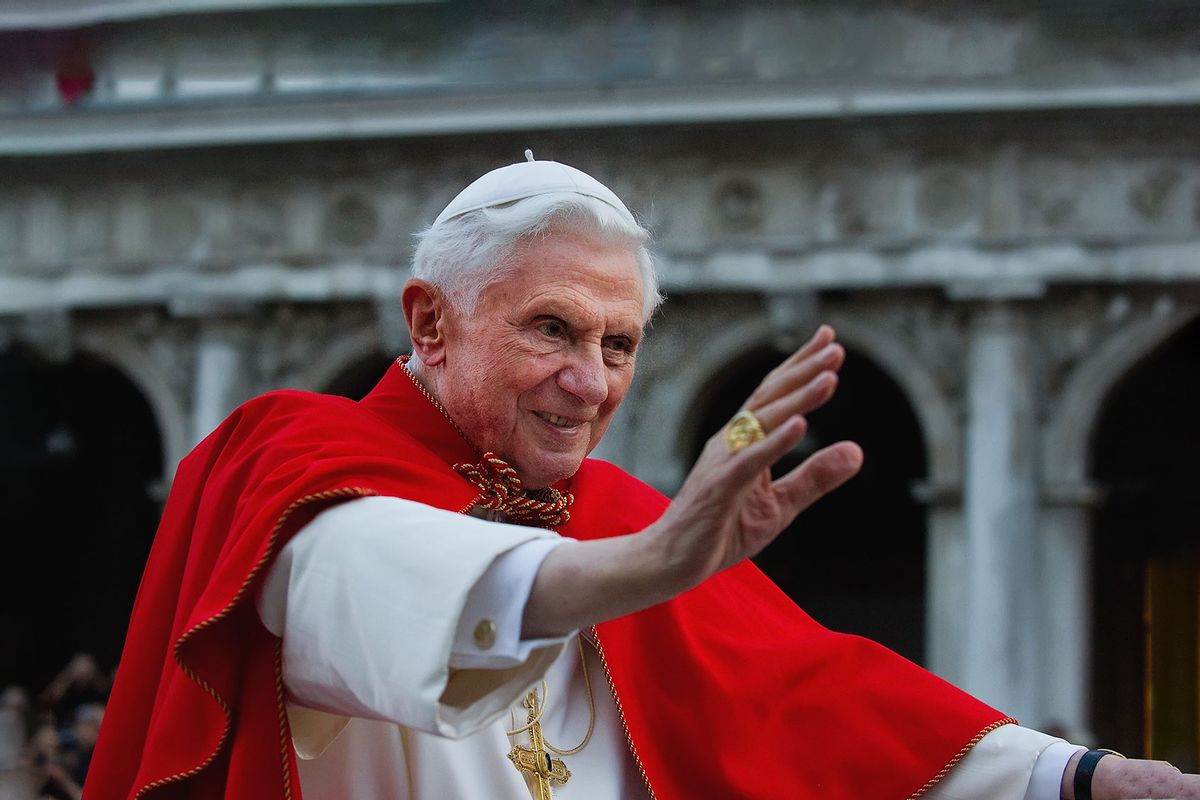 Pope Benedict XVI greets the crowd gathered in St Mark's Square while crossing the square on an electric car on May 7, 2011 in Venice, Italy. (Marco Secchi/Getty Images)
--

A civil lawsuit against the late Pope Benedict XVI, his fellow church officials and his successor will still be heard despite the pontiff's death on New Year's Eve, The Daily Beast reported on Tuesday.

The case and a declaratory action were brought in June by a 38-year-old German man — using the pseudonym Julian Schwarz — who accused the former pope of dismissing complaints about convicted pedophile, Father Peter Hullermann. Schwarz said the priest showed him pornography and forced him to have sexual intercourse and oral sex when he was between 11 and 12 years of age.

At the time of the abuse, Benedict was Archbishop of Munich and Freising. His successor Cardinal Friedrich Wetter and another anonymous church official were also named in the complaint.

Just a month before his death, Benedict said he would defend himself in the case in front of a German court. He also hired a law firm, which will continue to represent his estate in the subsequent proceedings.

Andrea Titz, spokesperson for the Traunstein Court in Bavaria, said in a statement Monday, "It is true that in principle an interruption occurs with the death of a party. In the present case, however, this does not apply, as the deceased was represented by an attorney of record."

"The proceeding will continue against the heirs," Titz added.

Prior to the June case, Benedict was also at the center of scandal after a 1,900-page report found that the pope mishandled four sexual abuse cases between 1977 and 1982, when he served as Archbishop of Munich. Furthermore, the report detailed that 235 people in the Munich diocese were accused of abusing 497 children under the age of 16 from 1954 to 2019.

"In a total of four cases, we came to the conclusion that the then-archbishop, Cardinal Ratzinger, can be accused of misconduct," said Martin Pusch, a lawyer at the Munich firm Westpfahl Spilker Wastl and one of the reports' authors, addressing Benedict by his full name, Joseph Aloisius Ratzinger. Per NBC News, Pusch added that Benedict had also "strictly" denied claims that he knowingly covered up abuse.

In January 2022, Benedict admitted providing false information amid the investigation. In a statement given to the Catholic News Agency, Benedict said he had been informed of the complaints, asserting that the mistake was not "done out of malicious intent, but was the result of an oversight in the editing of his statement."

about the late Pope Benedict XVI: