China went from "zero-COVID" to uncontrolled spread. What happened?

China once had the strictest COVID-19 policies in the world. Now, the pandemic situation is out of control 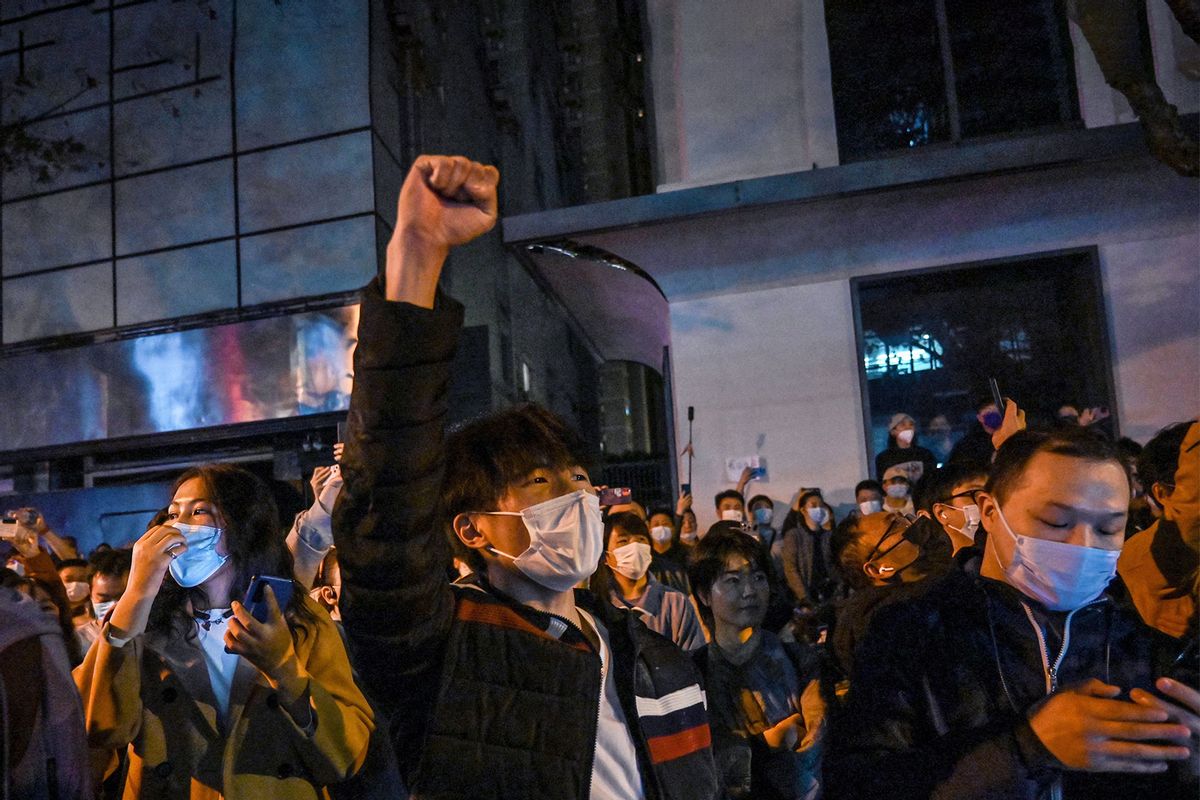 People sing slogans while gathering on a street in Shanghai on November 27, 2022, where protests against China's zero-Covid policy took place the night before following a deadly fire in Urumqi, the capital of the Xinjiang region. (HECTOR RETAMAL/AFP via Getty Images)
--

For years, China was a public health model for successfully preventing the spread COVID-19. Until it wasn't: within the past month, the number of COVID-19 cases exploded. Last week, fifty percent of passengers on two different flights from China to Milan tested positive for COVID-19, according to multiple reports. That number hints at the astonishing grip the SARS-CoV-2 virus has on the world's most populous nation.

Of course, uncontrolled spread means a massive increase in mortality rates due to COVID, too. The situation has become so calamitous that Chinese crematoriums are overwhelmed, with one major crematorium in the district of Longhua reporting five times as much traffic as usual. As a result, some families have been forced to leave the corpses of loved ones in their homes for days while waiting for funeral services.

As The BMJ, a medical journal, reported, the number of COVID deaths per day in China as of late December was estimated by a health analytics firm to be around 11,000; the reason for the estimate is because Western experts take umbrage with the way China counts COVID-19 deaths. The same medical model predicts 1.7 million deaths from COVID-19 in China by April 2023.

This marks a remarkable turn of events for a country that previously had remarkably low COVID rates compared to the rest of the world, even accounting for the nation's unwillingness to share health data. In November 2020, as Western nations were overwhelmed with COVID-19 cases, public health experts lauded China's success in keeping the virus at bay in the pages of the medical journal The Lancet Infectious Diseases. Among the reasons cited by writer Talha Burki include China's "centralized" response system; the fact that it is the largest manufacturer of protective medical equipment; citizens' memory of the first SARS outbreak; and the "speed" with which the country moved to halt transmission. China "managed to control the pandemic rapidly and effectively," Burki opines.

So what happened since then? The story of China's long march to uncontrolled, rapid spread starts with a protest.

Late last month, thousands of Chinese citizens took to the streets in protest against their nation's strict COVID-19 policies. The specific catalyst, Western nations subsequently learned, had been an apartment block fire in the city of Urumqi, one that had resulted in 10 deaths. Although the Chinese government claimed that the tenants were able to go downstairs, social media posts of footage from emergency responders made it appear that people were trapped in the building due to lockdown policies. Since the first protest on Nov. 26th, demonstrations popped up in every area of the country.

In response to those protests, the Chinese government drastically rolled back its strict policies for fighting COVID-19, colloquially known as the "zero COVID" approach. That, in turn, led to the essentially uncontrolled spread that we are seeing now.

"China's lockdown policies prior to the protests were really not part of any pandemic playbook."

So what went wrong in China? What lessons can Americans learn from China's COVID-19 policies and experiences?

According to experts, the Chinese government's problem may be that its policies have swung from one extreme end of the pendulum to the other.

Scientists think COVID-19 originated at a Wuhan "wet market." Here's what that means

"China's lockdown policies prior to the protests were really not part of any pandemic playbook prior to this one," Dr. Monica Gandhi, an infectious disease doctor and professor of medicine at the University of California, San Francisco, told Salon by email. While most nations implemented gradual programs like rolling lockdowns until vaccines were widely available, and then abandoned them once the public was safe, China took a different tactic. "China had been enacting policies as if COVID-19 could be eliminated or eradicated," Gandhi said. This approach clashed with the consensus held by Western infectious disease experts since mid-2020, who believe SARS-CoV-2 cannot be eradicated.

"A knowledge of the history of infectious diseases told us that only one pathogen has ever been eradicated worldwide from humans, which is smallpox," Gandhi told Salon. When smallpox was eradicated in 1979, however, it was because humanity had advantages beyond the vaccines: The virus did not have other animal reservoirs, was easily recognizable once a person was infected, and conferred lifelong natural immunity. The SARS-CoV-2 virus, by contrast, "has none of the features of smallpox that made it eradicable," such as not spreading when pre-symptomatic, not appearing in other animals and having clinical symptoms that do not appear like other viruses. This meant the ultimate mission of "zero COVID" was inherently unrealistic: "We have to 'live with COVID-19' but always work to control it by vaccines and therapeutics."

China succeeded in curbing the initial outbreak in spring 2020 and prevented 'waves of infections and soaring death tolls during the first two years of the global pandemic."

The upshot of China's extraordinarily strict policies, however, was that it indisputably saved millions of lives from potentially deadly or crippling COVID-19 infections. The downside is that, as when they dragged on for too long, they led to widespread mental health problems in a number of ways.

"China's COVID-zero policies, which effectively sealed China off from the rest of the world, used mass testing combined with quarantine and containment strategies to crush even small numbers of cases and prevent epidemic spread," Carl Minzner, a Senior Fellow for China Studies at the Council of Foreign Relations and author of "End of an Era: How China's Authoritarian Revival is Undermining Its Rise," told Salon by email. He acknowledged that, like other East Asian nations including South Korea and Taiwan, China succeeded in curbing the initial outbreak in spring 2020 and prevented "waves of infections and soaring death tolls during the first two years of the global pandemic," in contrast with the rest of the world. Indeed, during this period "most Chinese citizens [managed] to enjoy relatively normal lives."

Yet despite these benefits, the extreme nature of the Chinese lockdowns eventually pushed the citizenry too far. As unusually transmissible strains like delta and omicron emerged, the zero COVID policies became increasingly strict. This ranged from sudden lockdowns of specific neighborhoods and districts to months-long lockdowns of large cities like Xi'an and Shanghai. The previous feeling of normality had evaporated, with no end in sight.

"By November 2022, some 400 million people were under some form of movement restriction," Minzner told Salon. "Naturally, such policies began to impose severe economic and social costs on citizens and businesses, leading to steadily increasing discontent among many." Yet like quickly ripping off a Band-Aid after the body can no longer endure the thought of keeping it, Chinese President Xi Jinping has swiftly rolled back many of his previously draconian policies. According to Dr. Ali Mokdad — a Professor of Health Metrics Sciences at the Institute for Health Metrics and Evaluation (IHME) and Chief Strategy Officer for Population Health at the University of Washington — the Chinese people are freed from the government's COVID-19 tracking app and are permitted to quarantine at home.

Eventually the government decided to end all remaining aspects of its zero COVID policies as of early January. Instead of clamping down with as much might as it could muster, the Chinese government now went to the other extreme — and did so, it seems, without much of a plan.

"The main issue is that China did not have an exit strategy (no plan B), and they opened so fast instead of a phased approach."

"The main issue is that China did not have an exit strategy (no plan B), and they opened so fast instead of a phased approach," Mokdad told Salon. "There are reports of China's hospitals being overwhelmed since the explosion of COVID-19 cases and that many patients are elderly. Hospitals did not have enough time to prepare for a surge and do not have enough beds, and medications such as fever and cold medicine and antivirals are nearly impossible to find." While the government announced that it will start mass distributing Paxlovid, "it is not clear how much is available to make a difference and reduce the burden on the medical systems."

If anything, the evidence of China's poor planning can be demonstrated by comparing their COVID-19 policies with those of its longtime rival, Taiwan.

"Beijing's core problem is it made little — if any — preparation for what would follow after COVID-zero policies," Minzner explained. "This is quite different from, say, Taiwan — which signaled to its citizens well in advance that a retreat from COVID-zero was impending, stockpiled supplies, and made preparations to have medication delivered to infected people at home when cases surged as expected."

There are lessons here for the United States.

"I think the US should have realized early on that SARS-CoV-2 does not have features of being able to be eradicated as explained above and that immunity is the only way to get through a pandemic (most safely, via vaccination)," Gandhi wrote to Salon. "Our vaccine uptake in the United States was not as high as other high-income countries, leading to avoidable deaths in the U.S. I think we should have touted the vaccines more as a way back to normal life in the U.S."

about China and COVID-19