After massive attack by Bolsonaro supporters in Brasília, Democrats suggest exiled ex-president should be sent back 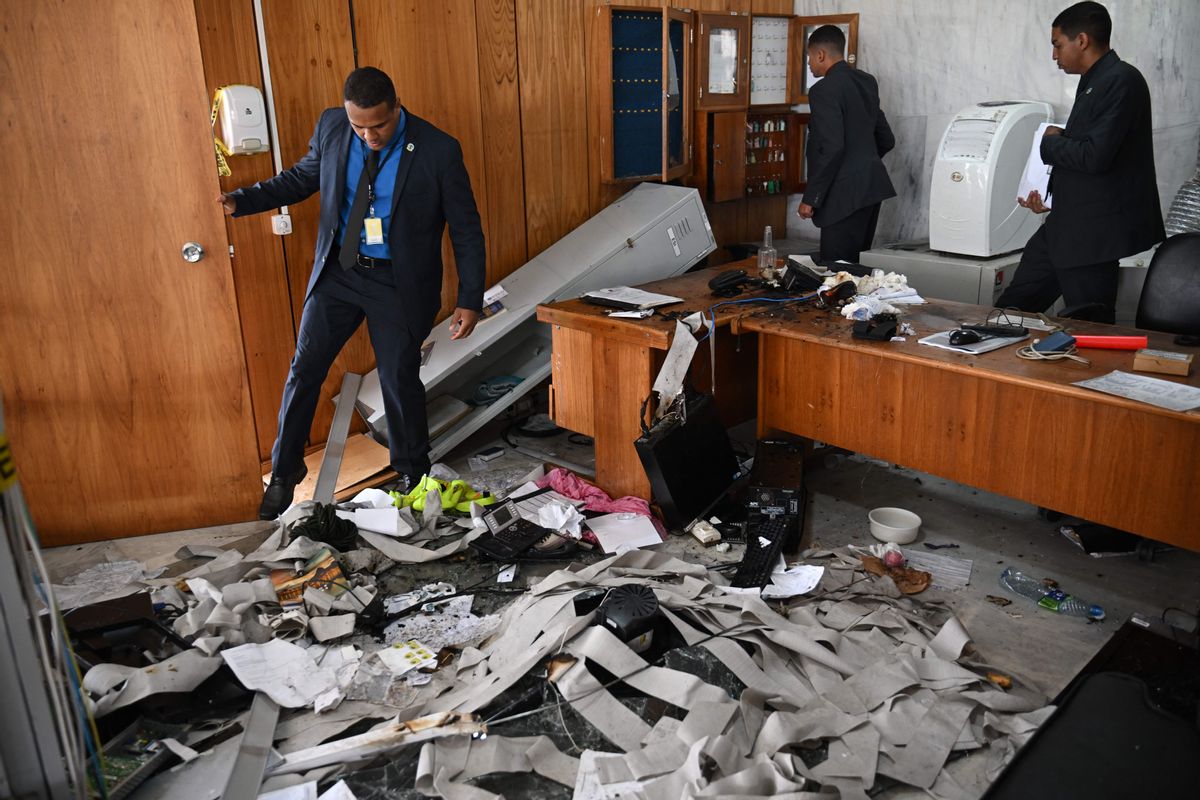 Prominent U.S. lawmakers said Sunday that Jair Bolsonaro should not be given safe harbor in Florida after his supporters — animated by the far-right former president's election lies — launched a massive attack on Brazil's main government buildings, an assault that came a week after leftist President Luiz Inácio Lula da Silva was inaugurated.

"Two years ago our Capitol was attacked by fanatics, now we are watching it happen in Brazil," Rep. Ilhan Omar, D-Minn., said Sunday evening after thousands of Bolsonaro supporters stormed and ransacked Brazil's presidential palace, Congress and Supreme Court.

"Solidarity with Lula and the Brazilian people," Omar continued. "Democracies around the world must stand united to condemn this attack on democracy. Bolsonaro should not be given refuge in Florida."

Just two days before his term ended and he was set to relinquish power to Lula following his failed bid to overturn the October election results, Bolsonaro flew to Orlando "with plans to stay for at least a month," the New York Times reported.

According to the Times, Bolsonaro — an ally of former President Donald Trump — has been "living in a rented house owned by a professional mixed martial arts fighter a few miles from Disney World." The Washington Post reported last month that "days after Bolsonaro's loss, allies met with Trump aides in the United States to discuss next steps. His son Eduardo, a Brazilian congressman, met Trump at Mar-a-Lago [in November] in Palm Beach, Florida."

"We must stand in solidarity with Lula's democratically elected government," she added.

In an appearance on CNN, Rep. Joaquin Castro, D-Texas, joined his colleagues in arguing that "Bolsonaro should not be in Florida."

"The United States should not be a refuge for this authoritarian who has inspired domestic terrorism in Brazil," said Castro. "He should be sent back to Brazil."

Citing current and former U.S. officials, Reuters reported late Sunday that "the most immediate threat to Bolsonaro would come if his U.S. visa were revoked."

"A U.S. consular official, speaking on condition of anonymity, said Bolsonaro had almost certainly entered on an A-1 visa, which are reserved for heads of state. A second source, a senior former U.S. diplomat, also believed it was almost certain that Bolsonaro had entered on an A-1," the outlet noted. "Normally the A-1 is canceled after the recipient leaves office. But with Bolsonaro having left Brazil and entered the United States before his term ended, the official suspected his A-1 is still active."

In a Twitter post, President Biden condemned the attack in Brasília and pledged that "Brazil's democratic institutions have our full support."

"The will of the Brazilian people must not be undermined. I look forward to continuing to work with Lula," the president added, making no mention of Bolsonaro's presence in the U.S.

Tensions in Brazil have been elevated since Lula's victory over Bolsonaro, who once declared that "only God" would oust him from the presidency.

"I have three alternatives for my future: being arrested, killed or victory," the former president said in August.

Since Bolsonaro's defeat, his loyalists have rallied in support of a military coup, attempted to storm police headquarters in the nation's capital, and plotted to plant explosives near Lula's inauguration site with the goal of preventing the peaceful transfer of power.

Brazilian authorities ultimately secured the government buildings late Sunday and arrested around 400 Bolsonaro supporters, but not before they were able to inflict significant damage and spark international alarm over the fate of Brazil's democracy.

Lula, who was in São Paulo at the time of the attack, blamed Bolsonaro for inciting the riot, accusing the former president of "encouraging this via social media."

"Everybody knows there are various speeches of the ex-president encouraging this," said Lula, who also lambasted the "incompetence, bad faith or malice" of the security forces tasked with protecting the government complex from the "vandals and fascists."

"We are going to find out who the financiers of these vandals who went to Brasília are," Lula vowed, "and they will all pay with the force of law."

Flávio Dino, Brazil's justice minister, wrote on Twitter that "we have all the plates of the buses that brought criminals to Brasília."

"Many were seized," he added, "and others will be."

about the turmoil in Brazil