The Duke of Sussex details how he lost his virginity, who's to blame for the Nazi uniform and rifts with his family 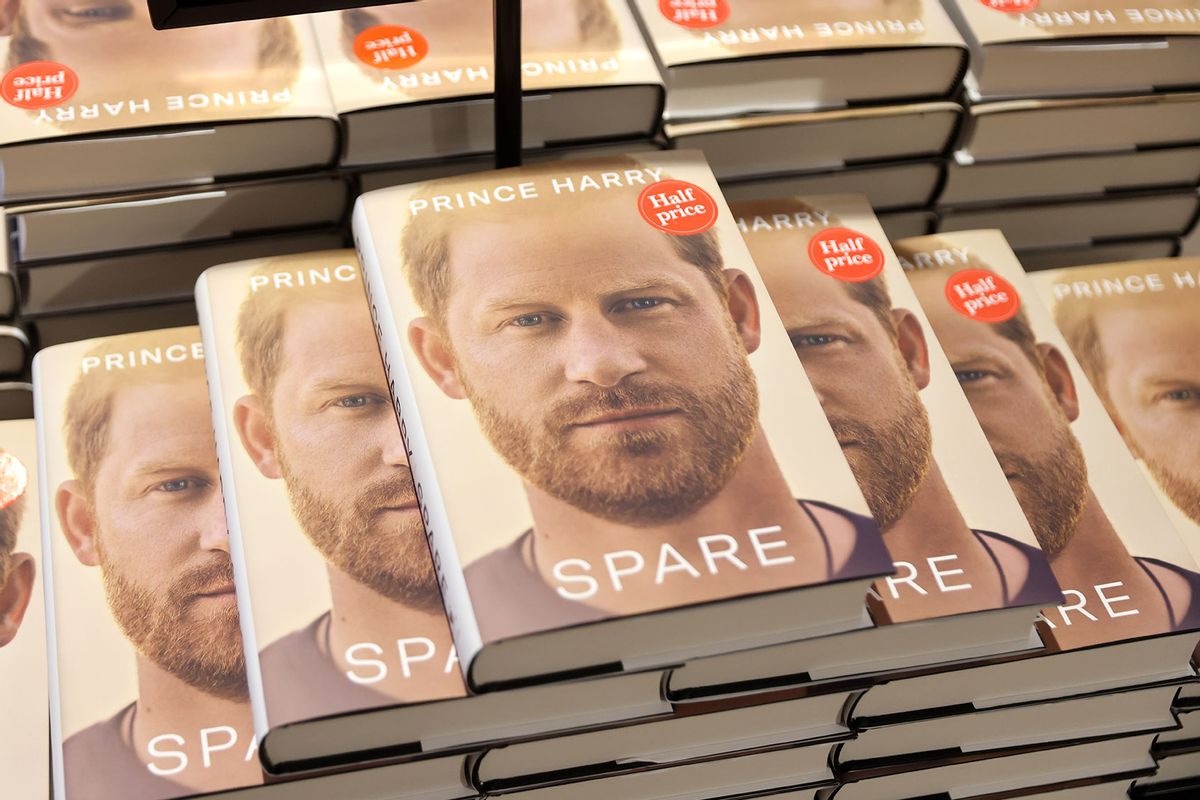 Copies of Prince Harry's new book 'Spare' on sale in a bookshop in Richmond, London on January 10, 2023 in London, England. (Chris Jackson/Getty Images)
--

Following an explosive 2021 interview with Oprah and an intimate six-part Netflix docuseries, Prince Harry is once again exposing the British royal family, this time in his highly anticipated book.

The Duke of Sussex's ghostwritten memoir "Spare" specifically details Harry's rifts with his family — namely with his father King Charles and his older brother Prince William — Harry's prior controversies, his decision to leave his senior royal role and his decision to part ways with the royal family alongside wife Meghan Markle, the Duchess of Sussex. Prior to its Jan. 10 release, "Spare" was the talk of the year as several outlets leaked a few of its most damning bits.

"Thank you for wanting to know my story in my words," Harry writes in the acknowledgements, per USA Today.

From Harry's heavy drug usage to his infamous Nazi uniform, here are the 13 biggest bombshells from Harry's memoir:

01
Harry claims William knocked him down and tore his clothes 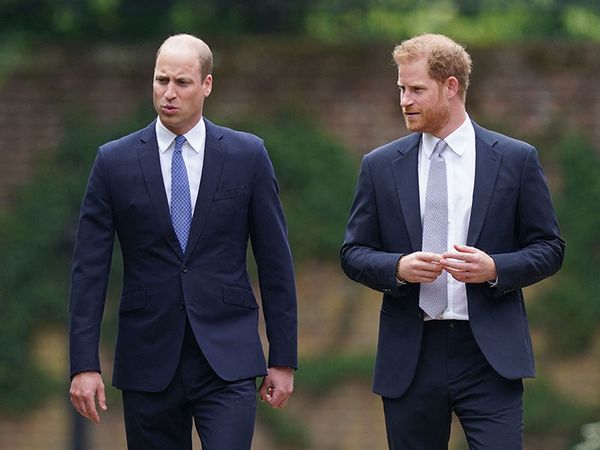 The alleged assault took place at Harry's London home — Nottingham Cottage — in 2019, where William confronted him about "the whole rolling catastrophe" of their relationship and rifts with the press. The brothers' squabble soon grew violent when William complained about Meghan, specifically calling her "difficult," "rude" and "abrasive."

"He set down the water, called me another name, then came at me. It all happened so fast. So very fast," Harry wrote, per The Guardian. "He grabbed me by the collar, ripping my necklace, and he knocked me to the floor. I landed on the dog's bowl, which cracked under my back, the pieces cutting into me. I lay there for a moment, dazed, then got to my feet and told him to get out."

Harry said that William urged him to hit back but when he refused, William left then returned "looking regretful, and apologized." William also insisted that Harry not tell Meghan about the attack, which he didn't immediately. Instead, he called his therapist.

Elsewhere in the book, Harry also referred to William as both his "beloved brother" and his "archnemesis." 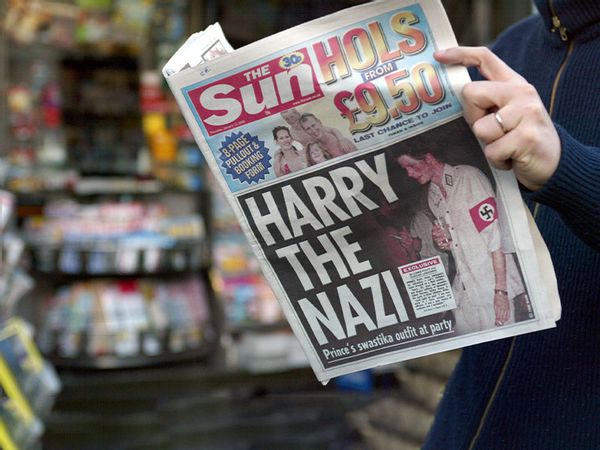 A man reads, 13 January 2005 in Paris, the British tabloid The Sun featuring Harry, 20, the younger son of Prince Charles and the late Princess Diana, wearing a khaki uniform with an armband emblazoned with a swastika, emblem of the German WWII Nazi Party. (GABRIEL BOUYS/AFP via Getty Images)

In the Netflix docuseries "Harry & Meghan," Harry called his infamous get-up "one of the biggest mistakes of my life."

Harry recounted the 2005 incident once again in "Spare," saying it was William and his wife Kate, Princess of Wales who told him to wear a Nazi soldier costume instead of a pilot costume.

"I phoned Willy and Kate, asked what they thought. 'Nazi uniform,' they said," Harry wrote. When he wore the costume, Harry said, "They [William and Kate] both howled. Worse than Willy's leotard outfit! Way more ridiculous! Which, again, was the point."

Naturally, the British tabloid newspaper The Sun published a front-page photo of a 20-year-old Harry wearing the costume, which also featured a red armband emblazoned with a big swastika.

"When I saw those photos, I recognized immediately that my brain had been shut off, that perhaps it had been shut off for some time," Harry wrote about the aftermath of the public reveal. "I wanted to go around Britain knocking on doors, explaining to people: I wasn't thinking. I meant no harm. But it wouldn't have made any difference. Judgment was swift, harsh. I was either a crypto Nazi or else a mental defective."

Harry added that his father, now King Charles III, "didn't gloss over the facts" when he saw his son's costume:

"Darling boy, how could you be so foolish? My cheeks burned. I know, I know. But he quickly went on to say that it was the foolishness of youth, that he remembered being publicly vilified for youthful sins, and it wasn't fair, because youth is the time when you're, by definition, unfinished. You're still growing, still becoming, still learning, he said.

"I'd long understood that the photo of me in a Nazi uniform had been the result of various failures — failure of thinking, failure of character," Harry also wrote. "But it had also been a failure of education. Not just school education, but self-education." 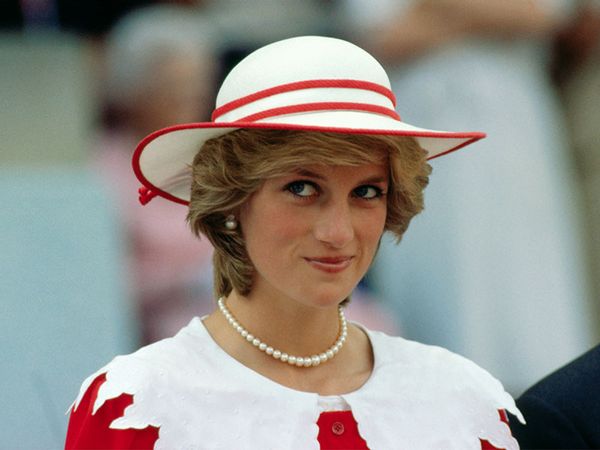 When news of Diana's death broke on Aug. 31, 1997, Harry recalled Charles waking him up in the middle of the night, wearing a white dressing gown, to share what had happened:

"Darling boy, Mummy's been in a car crash," Charles told Harry, who was 12 at the time.

"I remember waiting patiently for Pa to confirm that indeed Mummy was all right. And I remember him not doing that," Harry wrote in "Spare," per USA Today. Harry then demanded that Diana be treated at the hospital immediately.

"They tried, darling boy. I'm afraid she didn't make it," Charles said. Harry also wrote that Charles "wasn't great at showing emotions under normal circumstances," but he did try to reassure his son that everything was "going to be OK."

04
Harry was against Camilla, a possible "wicked stepmother" 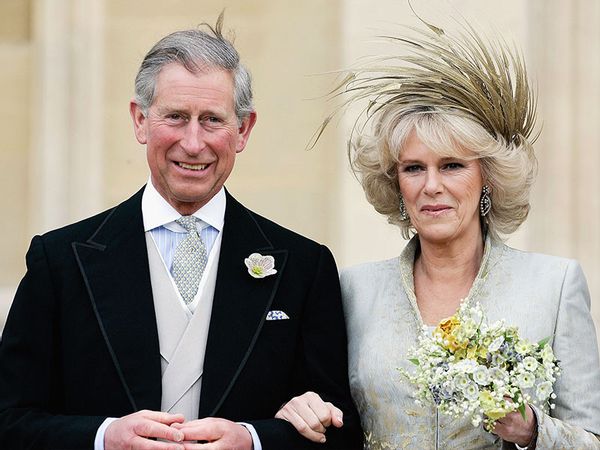 HRH the Prince of Wales, Prince Charles, and The Duchess Of Cornwall, Camilla Parker Bowles (Tim Graham Photo Library via Getty Images)
"That's why when the question came, Willy and I promised our father that we would welcome Camilla to the family. The only thing we asked for in return was that he didn't marry her," Harry wrote, explaining that the conversation took place once Camilla Parker-Bowles became more involved in Charles' life following Princess Diana's death. "'You don't need to get married again,' we asked him."
Charles and Camilla eventually married on April 9, 2005. Before the grand wedding, Harry also said he wondered if Camilla would "be mean to me. If she'd be like all the wicked stepmothers in storybooks. But she wasn't."
05
Harry said he killed 25 "enemy combatants" in Afghanistan 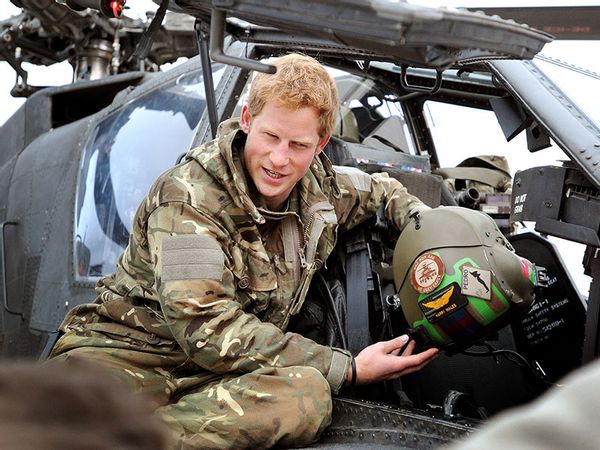 Prince Harry, shows a television crew his flight helmet as he makes early morning checks as he sits on an Apache helicopter at the flight-line at Camp Bastion on December 12, 2012 in Afghanistan. (John Stillwell - WPA Pool/Getty Images)

"Afghanistan was a war of mistakes, a war of enormous collateral damage – thousands of innocents killed and maimed, and that always haunted us," Harry wrote. "So my goal from the day I arrived was to never go to bed doubting that I'd done the right thing, that my targets had been correct, that I was firing on Taliban and only Taliban, no civilians nearby."

Harry later sought help from a general practitioner, who prescribed Harry pills that he didn't want to take. He also spoke to a few therapists and later began meditating, which helped him immensely.

"It quieted my racing mind, brought a degree of calm," Harry said. "I wasn't one to pray, Nature was still my God, but in my worst moments I'd shut my eyes and be still. Sometimes I'd also ask for help, though I was never sure whom I was asking." 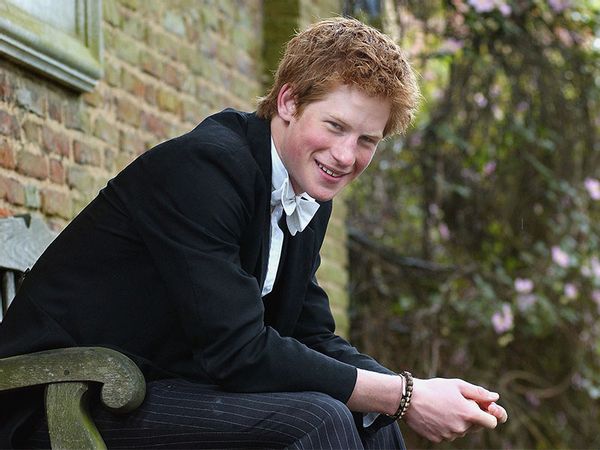 The youngest son of the Prince of Wales, Prince Harry poses for photographs on May 12, 2003 at Eton College, Eton in England. (Kirsty Wigglesworth-Pool/Getty Images)

During his teen and young adult years, Harry said he drank, smoked marijuana (he once "smoked an entire shopping bag of weed," per USA Today), snorted cocaine, smoked cigarettes and experimented with psychedelics, which all led to his party-boy image.

"It wasn't much fun, and it didn't make me particularly happy, as it seemed to make everyone around me, but it did make me feel different, and that was the main goal. Feel. Different," Harry wrote about the first time he was given a line of cocaine. "I was a deeply unhappy 17-year-old boy willing to try almost anything that would alter the status quo."

07
Harry lost his virginity to "an older woman" 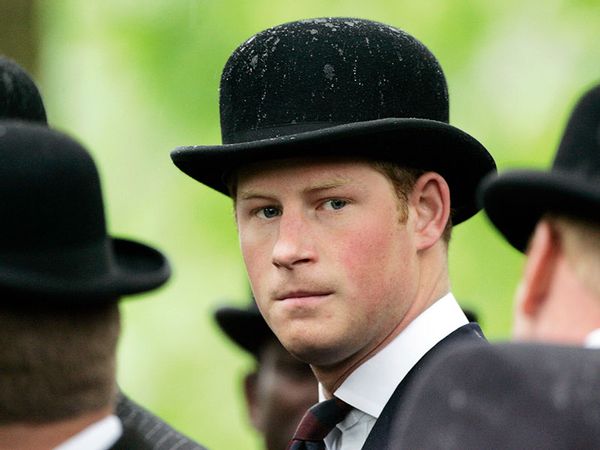 The unnamed woman, Harry describes, also "liked horses, quite a lot, and treated me not unlike a young stallion."

Harry said losing his virginity was a "humiliating moment" and an "inglorious episode."

"I mounted her quickly, after which she spanked my ass and held me back . . . one of my mistakes was letting it happen in a field, just behind a busy pub," he wrote. "No doubt someone had seen us." 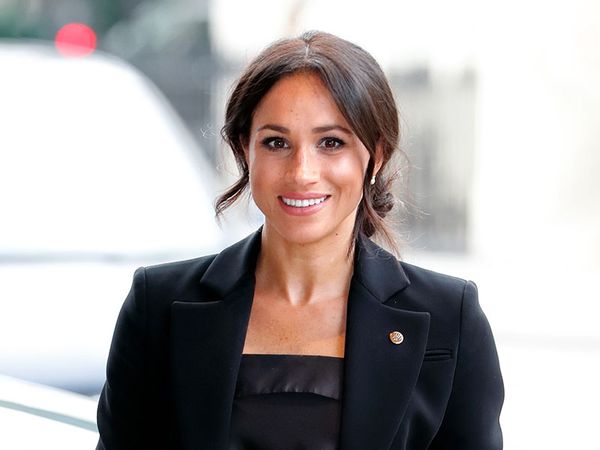 When he began dating Meghan, Harry said he made "the mistake of Googling and watching some of her love scenes online."

"I'd witnessed her and a castmate mauling each other in some sort of office or conference room . . . It would take electric-shock therapy to get those images out of my head. I didn't need to see such things live."

He added that Buckingham Palace tried to edit Meghan's scripts after the pair's relationship went public: "The show writers were frustrated, because they were often advised by the Palace comms team to change lines of dialogue, what her character would do, how she would act." 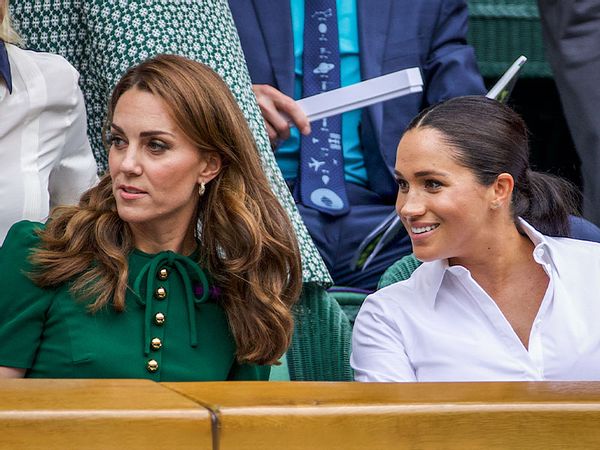 Prior to Harry and Meghan's wedding, Meghan reportedly told Kate that she "must have baby brain because of her hormones," which greatly offended Kate.

During a 2018 meeting with William and Kate at the Duke and Duchess of Sussex's residence, Kate allegedly told Meghan, "We're not close enough for you to talk about my hormones!" and demanded an apology from her. Harry also wrote that William called Meghan "rude" and pointed his finger, saying, "It's not what's done here in Britain."

"Meg said she'd never intentionally do anything to hurt Kate, and if she ever did, she asked Kate to please just let her know so it wouldn't happen again," Harry wrote. 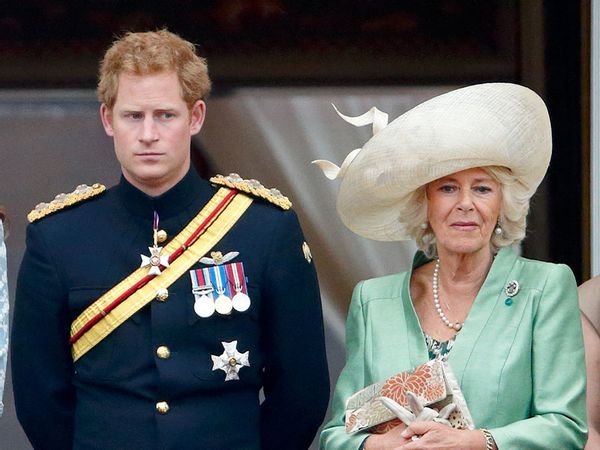 "I didn't relish losing a second parent, and I had complex feelings about gaining a stepparent, who I thought had recently sacrificed me on her personal PR altar," Harry wrote in "Spare."

He then accused his stepmother of leaking stories about him, saying, "Stories began to appear everywhere in all the papers about her private conversation with Willy, stories that contained pinpoint accurate details, none of which had come from Willy, of course. They could only have been leaked by the other one other person present." 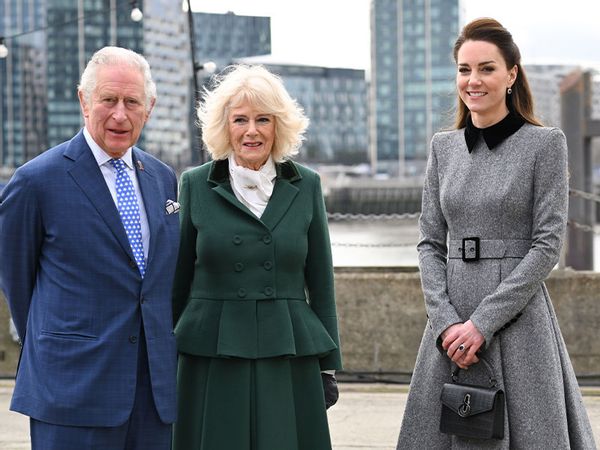 Kate's full first name is Catherine, and that simply would not do. As Harry tells it, Charles and Camilla "wanted Kate to change the spelling of her name, because there were already two royal cyphers with a C and a crown above: Charles and Camilla." The pair suggested that Kate ditch her birth name "Catherine" and instead spell it as "Katherine."

"I wondered now what came of that suggestion," Harry added.

12
Harry "snapped" at Meghan one time while they were dating 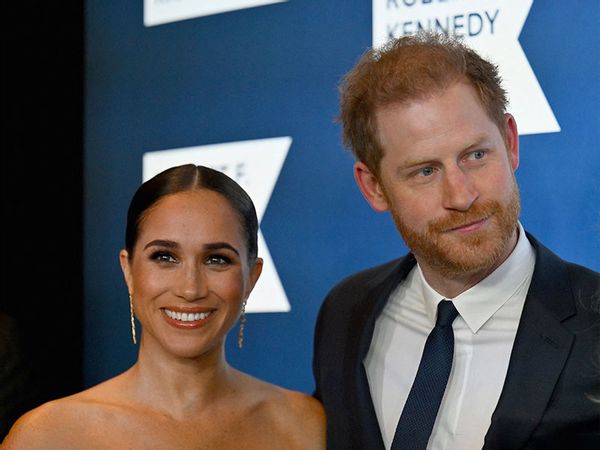 The incident took place one evening during dinner at home, when Harry said he felt "touchy," "angry" and "over-sensitive" over his conversation with Meghan.

"I snapped at her, spoke to her harshly – cruelly," he recalled. "As the words left my mouth, I could feel everything in the room come to a stop."

Harry wrote that Meghan then left the room and sat in her bedroom for 15 minutes. She told him she "wasn't going to tolerate that kind of partner," to which Harry said that he had tried therapy but it hadn't worked for him.

13
Harry reveals his most vulnerable moments 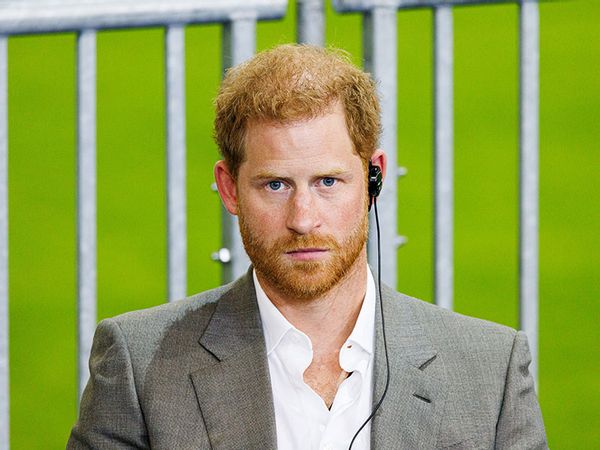 Prince Harry, Duke of Sussex (Patrick van Katwijk/Getty Images)
"In my life I've felt totally helpless only four times," Harry writes. "In the back of the car while Mummy and Willy and I were being chased by paps. In the Apache above Afghanistan, unable to get clearance to do my duty. At (Nottingham Cottage) when my pregnant wife was planning to take her life. And now," he says referring to the time when Meghan lost "so much blood" after she miscarried.

about Prince Harry and Meghan Markle: